Cheap Eats in and Around Istanbul's Grand Bazaar

Aslan Restaurant on Vezirhan Street | © Feride Yalav
The Grand Bazaar is a huge labyrinth of colorful stores, selling everything from jewelry to carpets, ceramics to leather – and much more. One of the largest and oldest covered bazaars in the world, with 61 streets and over 4,000 shops, the Kapalı Çarşı is also full of food vendors, apparent by the strong and delicious smell of kebab. Here’s a list of the best cheap eats around the Cevahir Bedesteni (Old Market).

A real Grand Bazaar classic, Havuzlu Restaurant opened in 1959 and has remained a favorite all these years. You’ll find traditional Turkish and Ottoman food, as is expected of a tradesmen restaurant, with the day’s dishes on show in a cafeteria-style display case, where everything is kept hot until it’s served. Make sure to arrive before 3pm, because the daily menu is consumed pretty quickly. If you’d rather just have a cup of coffee or tea, you can also take a seat outside by the fountain, which is responsible for Havuzulu’s name (“restaurant with a fountain”).

Possibly serving the best döner in the Grand Bazaar, Gül Ebru Kantin is always full of people ordering a quick bite on the go or sitting at one of the few available tables. Try the dürüm (döner wrapped in soft thin flatbread) either with or without melted cheese, washed down with ayran (yogurt drink mixed with salt). 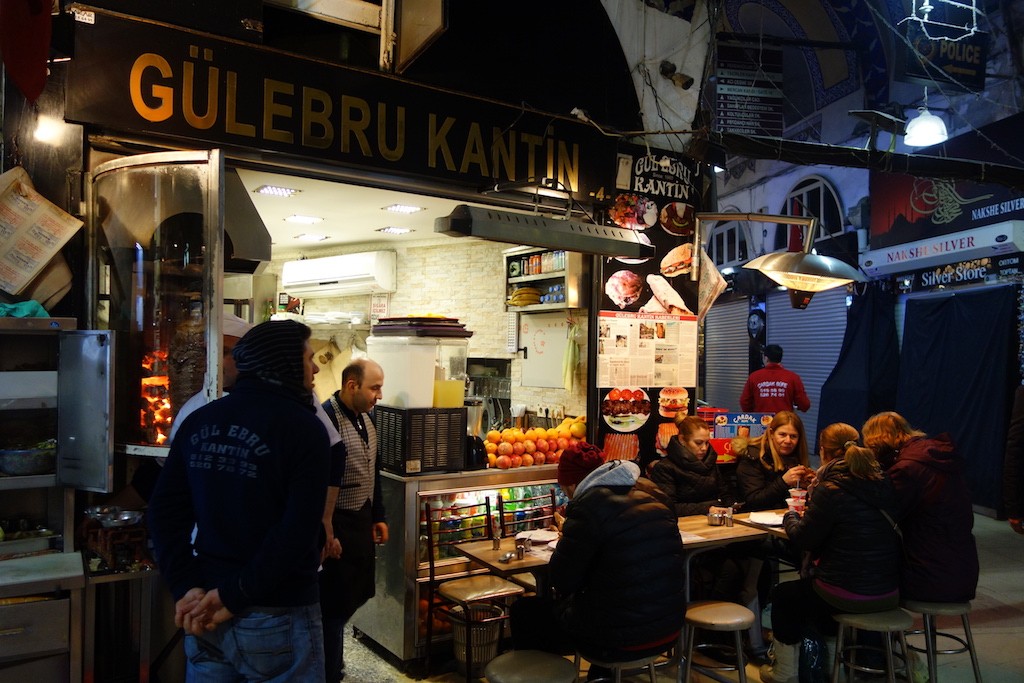 Restaurant, Turkish, Halal
Aslan Restaurant on Vezirhan Street | © Feride Yalav
Located just outside the bazaar, Aslan Restaurant can be found on the second storey of a clearly signed building on Vezirhan Street. Open since 1988, Aslan is a relaxed spot to sit down and gaze out the window while tucking into traditional Turkish and Ottoman dishes. The daily-changing menu is on display, with the option to order fresh fish, which is quite unusual for a tradesmen restaurant. Seasonal catch of the day may include sea bass or salmon. After every meal, a glass of Turkish tea is always offered.
More Info
Open In Google Maps
No:66 Vezirhan Caddesi, İstanbul, 34120, Turkey
+902125137610

Coffee Shop, Coffee
The Grand Bazaar’s most popular coffeehouse, Şark Kahvesi is the perfect place to rest your feet and people-watch while sipping a cup of coffee or tea. The interior is really nostalgic, complete with wooden tables and chairs, colorful Anatolian tablecloths, antiques, and black-and-white framed photos. It’s also no surprise that Turkish coffee is made the traditional way on a stove filled with hot sand, while the tea is always freshly brewed in a copper pot. If you want something to eat, you can choose from the grilled sandwiches as well as the vast dessert menu that includes everything from cheesecake to baklava(a rich, sweet pastry made from layers of filo).
More Info
Open In Google Maps
No:134 Yağlıkçılar Sokak, İstanbul, 34126, Turkey
+902125121144
Visit website

The Turkish city of Gaziantep is known for its kebap, so it makes sense that this small restaurant is a great place to feast on some excellent grilled meat, freshly cooked to order on the ocakbaşı (copper, hooded grill). One of Burç’s specialties is alinazik (marinated beef morsels served on eggplant purée), while the salad with chopped walnuts and pomegranate molasses is also a must-try. Burç only has a few tables so you may have to wait a little if it’s full, but it’s definitely worth it.