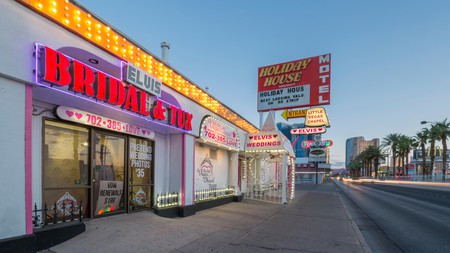 For an experience like no other, get hitched in style in Las Vegas, Nevada. Because of its lax attitude towards residency requirements, it’s been a popular place to tie the knot in the US since it became a city in 1905. From venues inside the Bellagio to Elvis impersonators and the Little Church of the West, here are the best wedding chapels you’ll find in Sin City.

Chapel of the Flowers 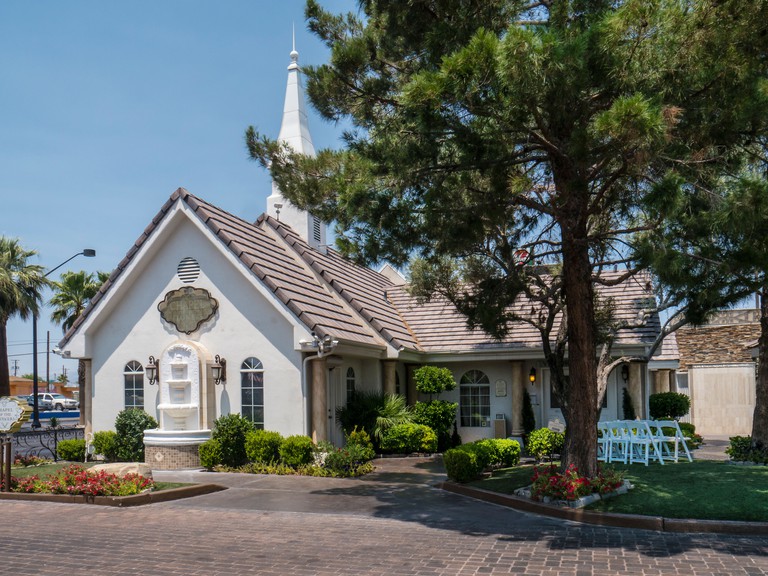 Chapel of the Flowers, on the Strip near Main Street, opened in 1960, making it one of the oldest chapels still in operation. The Las Vegas Review-Journal has crowned it the Best Wedding Chapel numerous times; it’s also received many Couples’ Choice Awards from WeddingWire. Prospective couples start by choosing from the chapel’s many on-site and off-site venues, including the Glass Gardens, the High Roller and the Valley of Fire; from there, the on-site staff will help with every detail, from flowers and photographers to limos, wedding planners and live music.

Little Church of the West 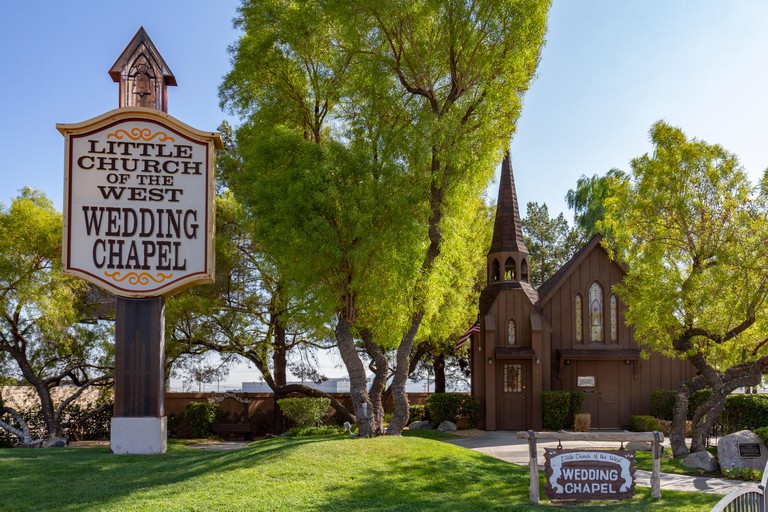 © Maurice Savage / Alamy Stock Photo
The Little Church of the West is one of the most recognizable wedding chapels in Las Vegas, sitting on the south end of the Las Vegas Strip, just past Mandalay Bay. It opened in 1942 and has hosted thousands of ceremonies throughout its storied history, including those of Bob Geldof and Paula Yates, Angelina Jolie and Billy Bob Thornton, and Cindy Crawford and Richard Gere. The wedding packages here include the Ace of Hearts, perfect for anyone who has decided to elope. The church also appeared in the film Viva Las Vegas (1964), meaning you can say you got married in the same place Elvis did.
Open In Google Maps
4617 South Las Vegas Boulevard, Las Vegas, Nevada, 89119, USA
+17027397971
Visit Website
Give us feedback 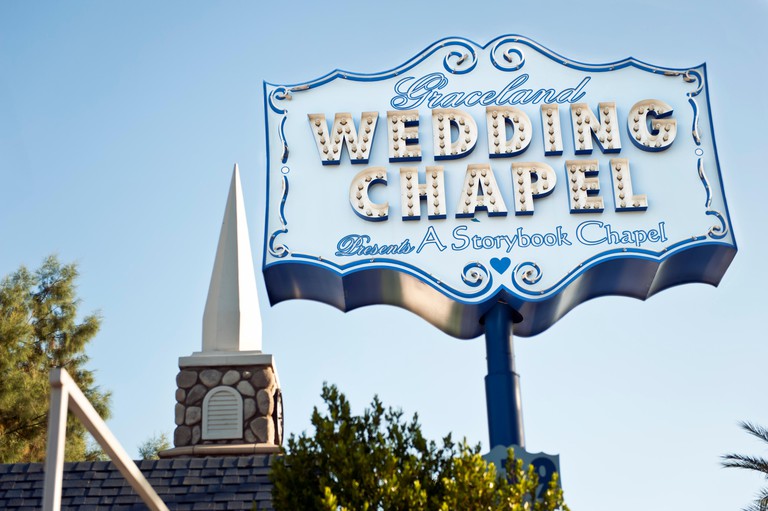 Graceland Wedding Chapel can put on a wedding fit for the King of Rock and Roll. The chapel first opened its doors in 1947 and changed its name to honor Elvis after his death in 1977. The chapel’s homage to the singer, musician and actor includes Elvis-themed wedding packages, such as Elvis impersonators and copies of his marriage certificate to Priscilla Presley.

For the ultimate Las Vegas wedding, Vegas Weddings has two locations and everything a couple could need. From Elvis to a drive-thru lane for couples on the go, lovebirds have numerous options and services to build their dream wedding package. Outdoor options range from the Valley of Fire State Park to the Hawaiian Gardens at the Hilton Garden Inn, while indoor options include a reception hall and a gazebo. The drive-thru is the most affordable option, complete with flowers, a photo session and a limo. 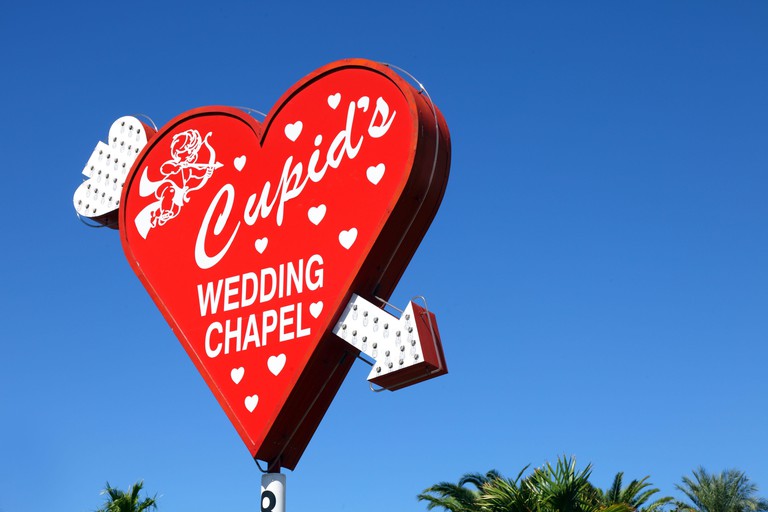 Cupid’s Wedding Chapel is another fantastic downtown option for couples who want to get married in true Las Vegas style. It features a number of impersonators to appear at and officiate weddings, including Johnny Cash, James Brown and, of course, Elvis. Cupid’s wedding packages are some of the most affordable in the city, starting at $99.

Chapel in the Clouds

Church
Facebook
Email
Twitter
Pinterest
Copy link
Share
Map View
Chapel in the Clouds is a fitting name for this wedding chapel inside the Strat. It offers several different venues for your vows, including the observation deck (indoor or outdoor) and a private reception room on the 112th floor. Truly adventurous couples can even get married on one of the three thrill rides on top of the tower. The party then continues in one of the reception venues, all of which overlook the city below.
Open In Google Maps
2000 Las Vegas Boulevard South, Gateway District, Las Vegas, Nevada, 89104, USA
+17023835210
Visit Website
Give us feedback

Mansion54 (formerly Hartland Mansion) is far from a typical Las Vegas wedding chapel. The mansion, which started as two separate structures, opened to the public in the 1970s after renovations by the Arvey Estate, and today, it hosts parties, shows, corporate events and weddings. Over the years, it has attracted celebrities, including Ginger Rogers and Elvis Presley, and been on the big screen; it appears in the 1995 film Casino. The curved staircases, black-and-white tile and Victorian-style facade will help make your big day feel like a fairytale.

Diehard fans of the King will love the variety of wedding packages at Elvis Chapel in downtown Las Vegas. It has made an appearance on several television shows, including Wild Weddings and The Girls Next Door. Here, an Elvis impersonator will marry you and sing for you. Elvis-centric vows are also included in the packages, as well copies of Elvis and Priscilla’s marriage certificate. Traditional wedding ceremonies are also available.

The Little Neon Chapel is perfect for anyone in Las Vegas looking to elope or wanting an intimate wedding. With two locations available downtown, it’ll make your special day one that you’ll remember forever. While it has some of the cheapest packages available throughout the city, it doesn’t skimp on quality. If you decide against an indoor ceremony, you can get married at Red Rock Canyon or on a helicopter over the Las Vegas Strip. For those who just want to sign papers, the Little Neon Chapel also offers a sign-and-go option, starting at $49. 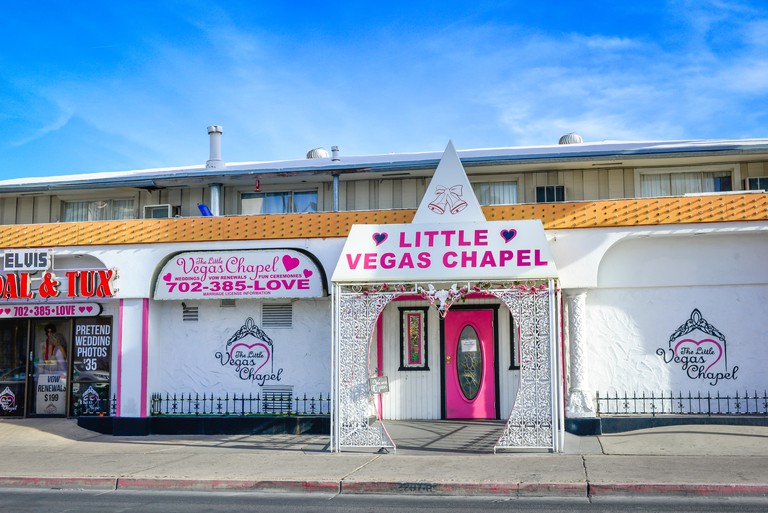 One of the most famous wedding chapels in a town full of them, the Little Vegas Chapel is a one-stop shop for a hassle-free and reasonably priced wedding. The chapel close to downtown offers everything from on-site clothing rentals to photographers, limousines and bouquets, making it a stress-free option. Still not sure you want to go through with it? The chapel also offers pretend weddings so that you can have all the fun without any of the legal paperwork. 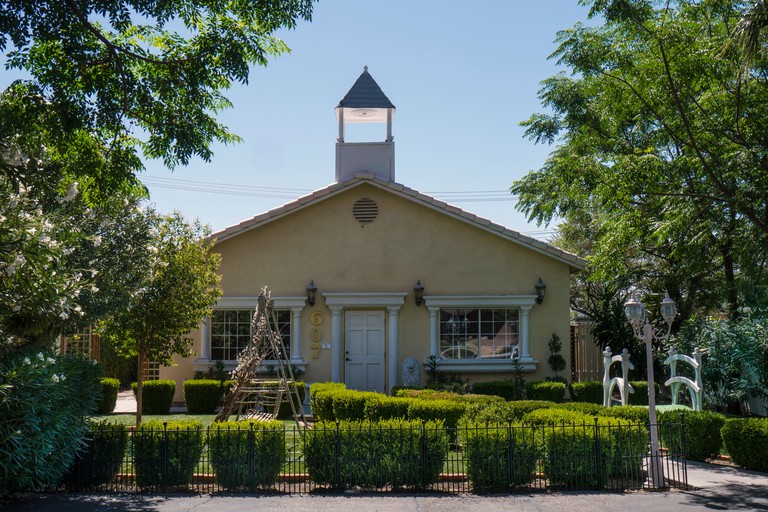 Vegas weddings don’t have to be quick or a bit wacky. This pretty chapel right on the Strip has private gardens for photos, a reception venue and even a gazebo area for outdoor ceremonies. Weddings range from an intimate service for just the happy couple to a full package including a candlelit aisle, live streaming, a champagne reception and a wedding cake. 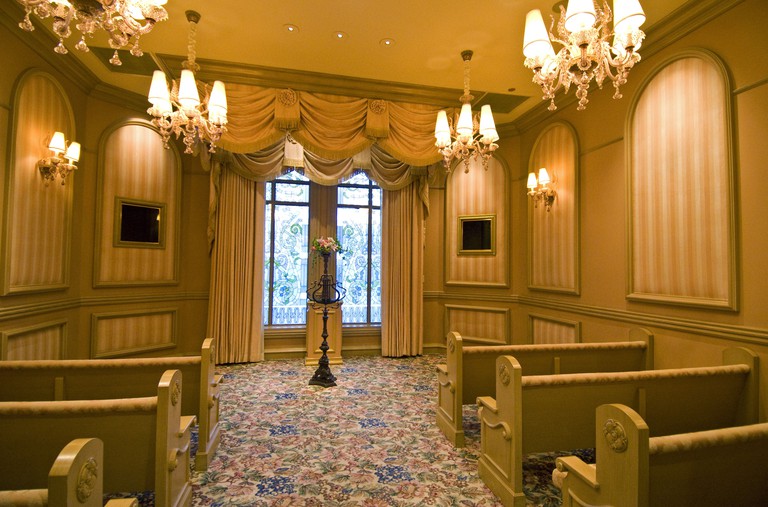 Nowhere in Vegas beats the Bellagio for the full fairytale experience. Known for its famous dancing fountains and botanical gardens, this elegant hotel has several tasteful wedding venues, including a glamorous terrace overlooking the lake and the fountain courtyard. It’s more expensive than most chapels in the city, but extensive packages can include a petal-scattered aisle, a behind-the-scenes tour of the hotel, personalized chocolates and two nights in a penthouse suite.

If you’re looking for a personal touch, the Paradise Wedding Chapel offers a more intimate approach than many Vegas chapels. Founded by a husband-and-wife team more than a decade ago, the modern all-white chapel now offers vow renewals, traditional ceremonies or an Elvis impersonator to lead the service. If you want something a little different, you can also tie the knot in a helicopter as it soars above the Strip at night.

Forget boring bouquets – the Fremont Wedding Chapel offers a host of freebies and add-ons you could only find in Vegas. With three chapels around the city, it throws in gifts, such as VIP nightclub admission and cabaret show tickets, for newlyweds. The bride and groom can then choose from a range of unique extras, including Just Married sashes and Elvis shades with attached sideburns, or go for the full Vegas experience and say “I do” in a limo cruising down the Strip. 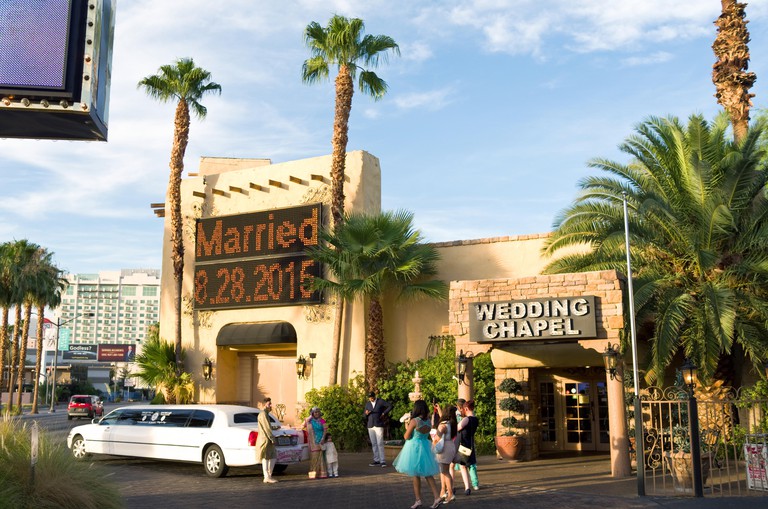 No wedding is too wacky for Viva Las Vegas. The largest freestanding chapel on the Strip has several indoor and outdoor venues, including a ’50s-era diner for vintage fans. Couples can opt for one of the themed weddings, including superhero, gothic, James Bond, pirate and even Freddy Kreuger. Pushed for time? Don’t panic. You can even get married in a drive-up ceremony outside, where you won’t even need to get out of your car.