The Best Things to See and Do in Cappadocia, Turkey 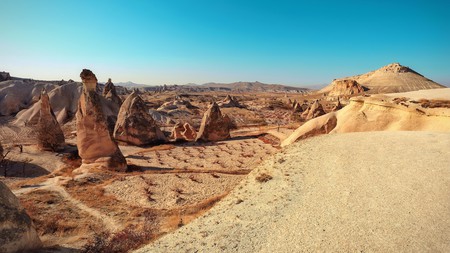 Paşabağ, or Valley of the Monks, in Cappadocia has an other-worldly feel, with fairy chimneys dotting the landscape | © Larisa Dmitrieva / Alamy Stock Photo

In Cappadocia, the crowning historical jewel of Turkey, explore centuries-old troglodyte caves and pink-hued rocks in Göreme National Park, and watch thousands of hot-air balloons take to the sky.

Cappadocia is a place you have to see to believe. Seemingly plucked from a fairytale, the region has, in recent years, become something of an Instagram legend. With fairy chimneys, underground towns, the Göreme Open-Air Museum, cave hotels and a sky that becomes dotted with hot-air balloons at sunset, there’s something ethereal about life in this pretty part of Turkey.

A must-visit when in Cappadocia, Dibek Restaurant sits in a 475-year-old building in the town centre of Göreme. Here, you’ll discover the best traditional home-cooked food in the region, with delights such as sactava (beef stir-fry) and aside (the traditional village dessert of Göreme). But the testi kebab (meat, chicken or vegetables cooked in a clay pot and served with rice and salad) is hands down the must-try dish. 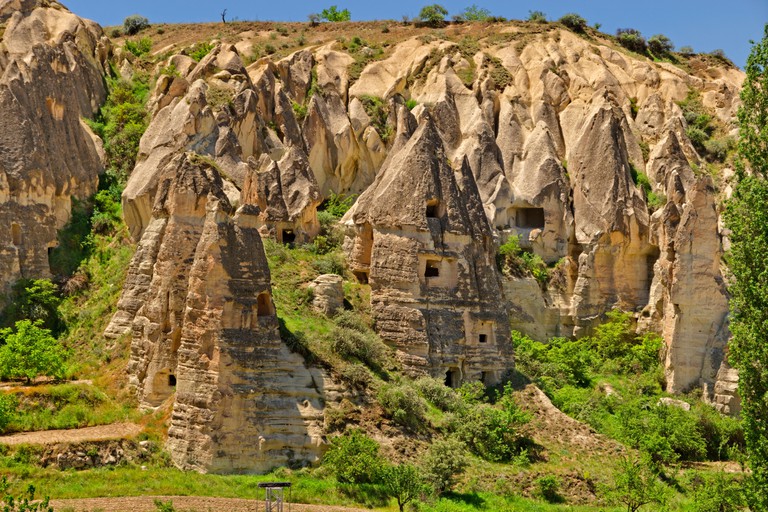 © Roy Conchie / Alamy Stock Photo
There’s something other-worldly about Göreme National Park – a Unesco World Heritage site. Perhaps it’s the rock-cut sanctuaries that show evidence of Byzantine art in the post-Iconoclastic period or the unique dwellings, troglodyte villages and underground cities that date back to the fourth century. No doubt, there’s a magical feeling here.

Peek inside the Cappadocia cave dwellings

Park
Facebook
Email
Twitter
Pinterest
Copy link
Share
Map View
While famous for its sunrise hot-air balloon rides, Cappadocia is also known for its enchanting cave dwellings. All across the region, particularly throughout Göreme National Park, you’ll find former homes carved into rock faces – communities lived in these caves right up until 1952. Now, many have been restored into upmarket cave hotels.

The most noticeable difference between a kilim rug and a regular rug is that kilims are made by interweaving various coloured threads to create a flatweave, resulting in intricate and vibrant designs. You’ll probably want to pick up one for yourself to take home; La Maison du Kilim has the most beautiful collection in the area and the friendliest owner. 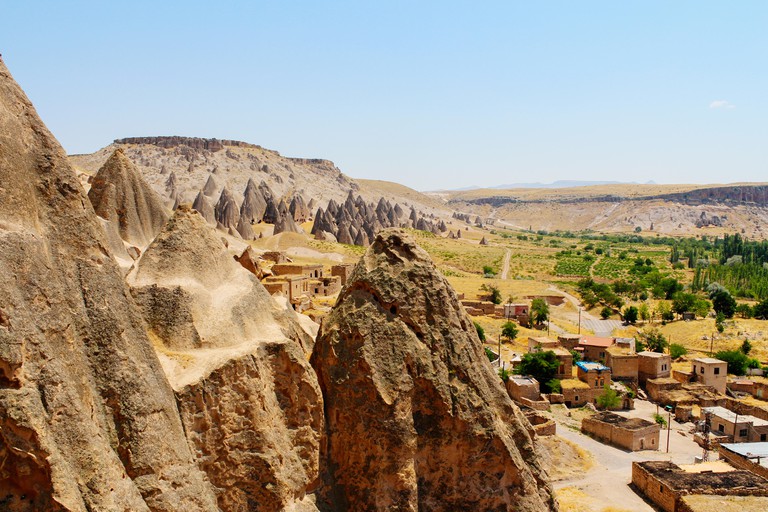 Selime Monastery is the largest religious structure in the Cappadocia region and is cut directly into the rock face. Those who venture inside will discover weather-beaten frescoes, steep staircases, hidden passageways and signs of early civilisations. It’s thought to date back as early as the eighth or ninth century, but it has been abandoned since the 16th century.

Marvel at the sunset from Uçhisar Castle 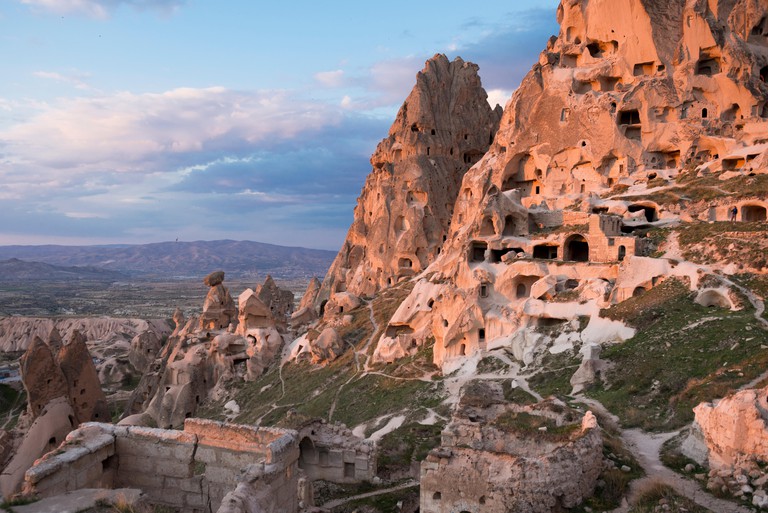 Uçhisar Castle, a castle-rock measuring more than 60m (197ft), makes for an imposing sight as it towers over the region. Once used as a place of refuge for villagers when enemy armies would visit, it has the best vantage point in the area. Those willing to make the short but steep walk up will be rewarded with a spectacular view – head here in the early evening to take in one of those famous Cappadocia sunsets.

Paşabağ is one of the best places to see Cappadocia’s famed fairy chimneys, the pretty rock formations with a small “tuff” on top, thanks to years of erosion. On the road to Zelve, a valley of fairy chimneys erupts out of the ground here – look for the twin- and triple-topped rock caps as you wind your way through these fabled formations. 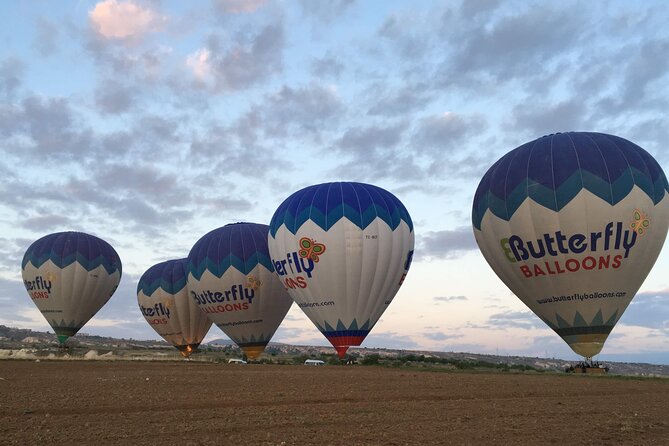 The other thing that Cappadocia is famous for is hot-air balloons. While many companies in the area offer the opportunity to drift over the mountains and valleys, Butterfly Balloons is the most universally popular. The staff are incredibly experienced professionals committed to giving you the safest and most enjoyable experience possible. Try to schedule your trip for sunrise or sunset to bask in the most beautiful panoramas below.

Venture inside the Derinkuyu underground city

With more than eight floors of carved rock, the Derinkuyu underground city once housed 20,000 people. This elaborate subterranean community is thought to have acted as a shelter from invaders. Today, it’s open for public viewing. You can tour through churches, meeting rooms and storerooms that aided in the running of this long-lost civilisation. 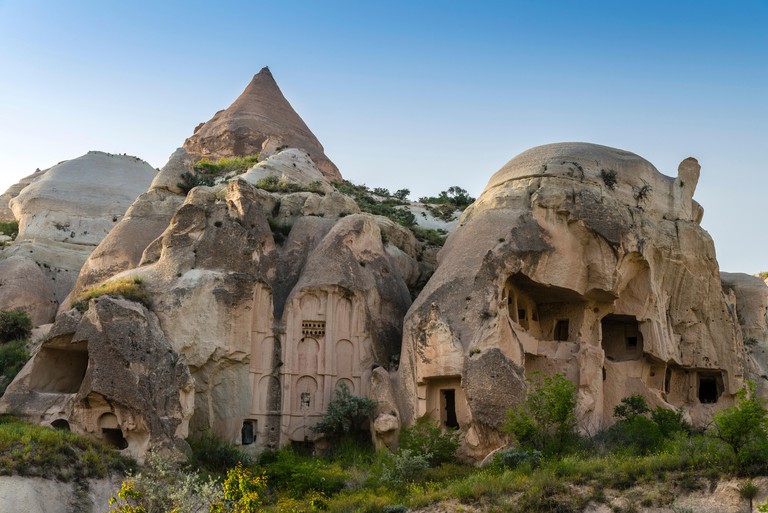 As the name suggests, the Rose Valley is a vast stony valley that extends as far as the eye can see, making a perfect photo opportunity. Keep an eye out for rock-carved churches and countless tracks leading to small villages. Explore the loop trail on foot; at the top, you’ll amazingly find a tiny cafe, seemingly in the middle of nowhere, that is powered exclusively by solar energy. Cool off with a cold drink and a bite to eat.