The Street Musicians of İstiklal Street 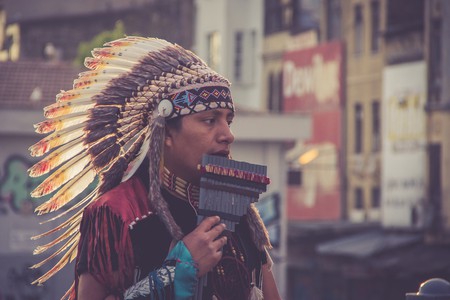 Istanbul’s crowded İstiklal Street is always a popular place for musicians to show off their talent and make some extra cash. From Turkish folk music to the more experimental traditional bands, there’s plenty of amazing talent that performs for free on a daily basis. Here we take a look at some of the eclectic sounds emanating from Istanbul’s most famous street.

The sound of the accordion on the streets of Istanbul is quite commonplace as the Romani people are one of the communities that make up the city. Stanescu Florin is one of the most well known among these accordion players, he has a beautiful voice and quite a talent for the difficult instrument. Check out one of his performances on İstiklal Street.

Turkish folk music represents the cultures and civilizations that have inhabited Turkey over the centuries; its many different songs and dances are as wide and varied as they are beautiful. The bağlama instrument is one of the most commonly used folk instrument in Turkey and you’ll hear it often on İstiklal Street, where local musicians will sing classic Türkü to add some nostalgia and emotion to the daily grind. The handsomely dressed Ozan Garip is one of the most well-known bağlama players on İstiklal Street.

It’s no secret that Istanbul has been a fascinating place for foreigners who have found jobs and settled into the city. As such, İstiklal is also where you’ll see expat musicians showcasing their talent and unique instruments to make some extra cash and share their talent with passersby. One of our favorites is this musician who uses the Hang instrument for a rather special live concert right on the street.

As a city that is known for its mix of cultures, the sound of the South American pan flute should come as no surprise. Decked out in traditional (and very colorful) garb, these musicians, who play music that is common in the Andes region of South America, are a real standout. The folklore music of the rural and indigenous populations of South America can be found regularly on İstiklal Street and are quite popular with locals who sometimes might be hearing this music for the first time.