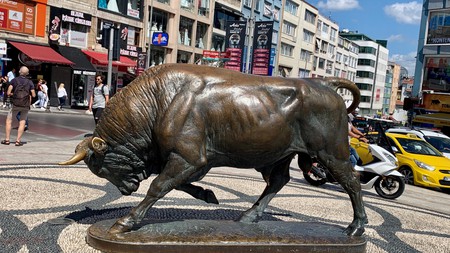 The Fighting Bull statue in Kadıköy is a historic landmark on Istanbul’s Asian side. Like many pieces of art, it lived a nomadic life before finding its permanent home here. Istanbul resident Mindy Yartaşı traces its journey to becoming the neighbourhood’s most famous artwork.

The feisty, life-size bull statue guarding the intersection of Kadıköy’s Altıyol Square on Istanbul’s Asian side is hard to miss. Sitting on one of the highest spots in the neighbourhood, around a kilometre (0.6 miles) from the Asian district’s ferry pier, the piece’s commanding stance juxtaposes the surrounding humdrum urban chaos and daily bustle in a way that fits Istanbul’s character perfectly. 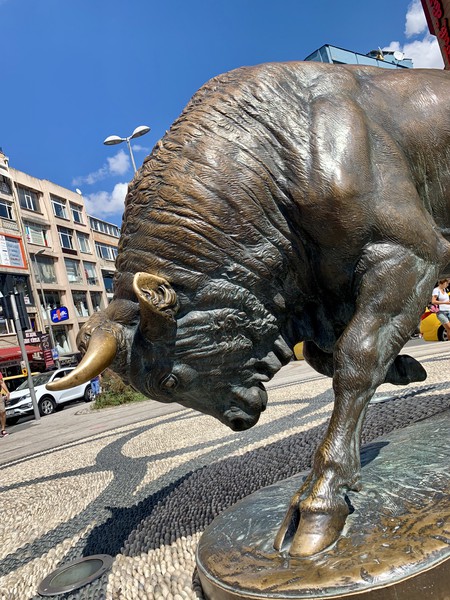 Locally known as Fighting Bull, the bovine captures the taut force of an impending assault. A bowed head with sharp horns and magnificently sculpted tense muscles lend the impression that it could spring into a riotous rampage at any moment. The statue’s bronze has taken on a beautifully muted chestnut patina, and its horns and tail gleam from being rubbed by thousands of passersby and enthusiastic Instagrammers daily. 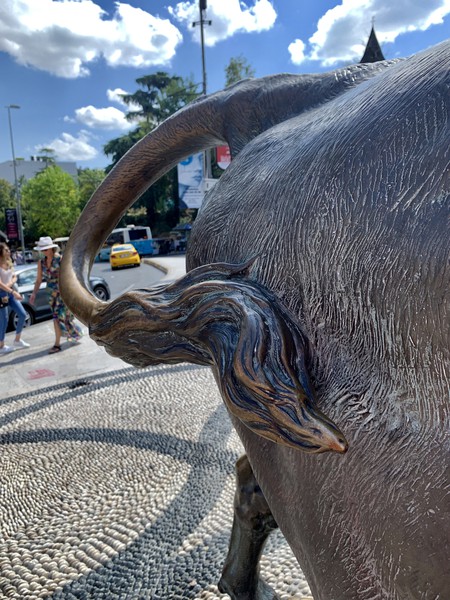 The statue has a fascinatingly chequered past | Courtesy of Kadıköy

The statue has become a marker for people looking to meet in the area – so much so that “Just meet me at the bull” is a common and widely understood request. But where did it come from? This masterpiece surely wasn’t crafted to stand guard over honking cars, or to offer free rides to toddlers.

Like many pieces of art over the centuries, Kadıköy’s beloved bull has a chequered past. Most scholars agree the bull was created by acclaimed 19th-century French sculptor Isidore Jules Bonheur, but tracing its journey to the square was tricky.

Historical accounts of how the statue arrived in present-day Turkey diverge into two timelines. The first claims that the artist was commissioned to create the statue as a symbol of strength, to celebrate France’s victory over the German Empire for the coal-rich Alsace-Lorraine region in the 1860s. This timeline continues with the Germans taking the region – where the statue was located – in the Battle of Sedan in 1870. The victors then transported the symbol of power to the empire’s capital, Berlin, where it would stay until the early 1900s.

According to this timeline, after the outbreak of World War I the Ottoman and German empires created the Ottoman–German Alliance to stabilise Ottoman forces and allow Germans access to neighbouring British colonies. As a symbol of this union, German Kaiser Wilhelm II presented the bull statue to Young Turk Revolution leader Enver Pasha, the Ottoman Empire’s de facto ruler and minister of war.

Timeline number two claims Ottoman Sultan Abdülaziz’s love of hunting led him to visit a World Fair in Paris in the 1860s in search of unique art to display in Yıldız Palace, his personal residence. In this account, he then placed an order with Bonheur for 24 statues, including the Fighting Bull. This version is supported by the earliest-known photograph of the statue, which some historians believe places it at Yıldız Palace around this time. 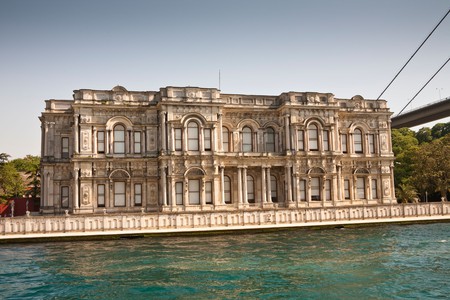 At this point, the two accounts generally merge. Fighting Bull and its sister statue, Stubborn Bull, were transported across the Bosphorus to the city’s Asian side to grace the gardens of Beylerbeyi Palace in Üsküdar; however, following the empire’s loss in World War I, Enver Pasha fled the country and many of the magnificent sculptures gracing palace gardens were distributed among the government’s remaining powerful figures. The Fighting Bull made a trip across the Bosporus again, to a private residence in Belgrad Forest in Istanbul’s European seaside Sarıyer neighbourhood, where it was forgotten for decades.

In the 1940s, the statue reappeared in front of the newly inaugurated Lütfü Kırdar Congress and Exhibition Palace located in the Harbiye district on the European side. Soon after, the statue was moved in 1955 to grace the garden of the city’s first five-star hotel, Hilton Istanbul Bosphorus, near Taksim Square. This posh spot would be its home for 15 years until, in 1971, it once again made the trip across the Bosporus to stand in front of the old Kadıköy Municipality building, across from the ferry pier. It was then that residents in Kadıköy adopted the well-travelled statue as their own.

The road-weary piece was moved to its current spot in 1987, and in 2018, despite a request that it be placed back in Beylerbey Palace, the Istanbul Municipality decided the statue had become a landmark in Kadıköy. After over 150 years, it has finally found a permanent home.

If you decide to make the trip across the Bosporus to visit the Fighting Bull, be sure to bring a good appetite with you. Kadıköy is brimming with restaurants and cafés offering everything from traditional Turkish food, seafood and breakfasts to Korean and Thai cuisine. Once you make your way to the statue, simply head up the hill and lose yourself in the tiny side streets lined with hundreds of venues. The area also has a wide variety of boutique shops selling antiques, clothing, shoes and everything in between at prices meant to draw in local residents – meaning chances are, you’ll find some great deals.