The Most Beautiful Places in Turkey 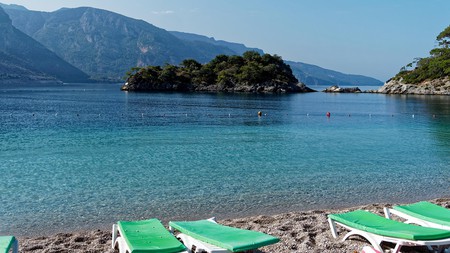 When you think of Turkey, the buzzing city of Istanbul is usually the first place that pops into your head. Yet the country is full of splendid destinations and gorgeous landscapes that could easily be part of a real-life fairytale. From the Butterfly Valley nestled in cliffs along the Lycian Way to the surreal fairy chimneys of Cappadocia, we round up the most beautiful places in Turkey.

Brimming with Byzantine and Ottoman palaces, mosques, churches, monasteries and ancient ruins, Istanbul is probably the most vibrant city in Turkey and surely among the prettiest. One of the neighbourhoods that stands out is Balat. The old Jewish quarter is filled with cafes and restaurants, antiques and vintage shops, next to colourful houses. Cobbled alleys are dotted with music venues and art galleries, while brightly painted steps and lively murals complete the rainbow-coloured setting. The area is also rich with Byzantine heritage so expect to find impressive churches from the era. 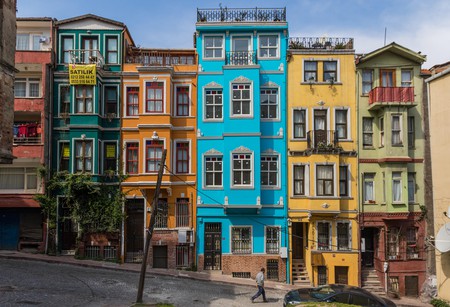 If you’re looking for the finest examples of classical architecture, you’re sure to find them in Ephesus. Once an ancient Greek city (one of 12 in the Classical-era Ionian League), the Unesco-protected Ephesus has it all: Roman, Christian, Ottoman, Hellenistic and Greek monuments, among which is the Temple of Artemis. This grand structure is one of the original Seven Wonders of the World and you can still marvel at its ruins today. Many more temples are found here, along with a large amphitheatre and the Library of Celsus, which has romantic, carved archways. 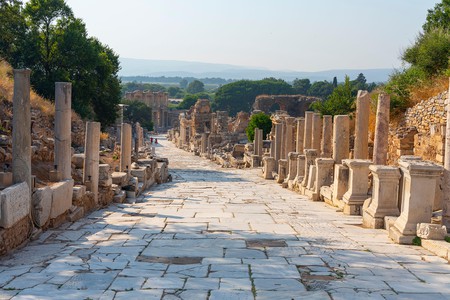 Not to be confused with the man-made Blue Lagoon in Iceland, this Blue Lagoon (in the Fethiye neighbourhood of Olüdeniz) is very much natural, with waters displaying shades of fluorescent blue. It’s framed by a strip of white sand and lush promontories, all making for an incredible landscape that feels more like the Maldives than Turkey. The lagoon is perfect for snorkelling, kayaking and swimming, while there’s a good chance you’ll catch a glimpse of sea turtles and seahorses here – you might even get to swim with them. Paragliding is also a great way to take in the superb views. 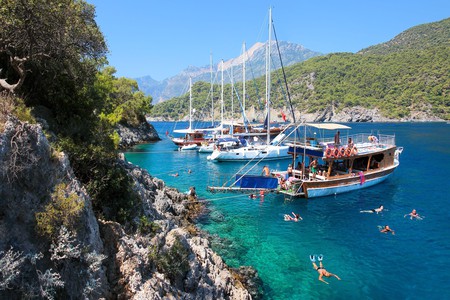 This region high on the Anatolian plateau is best-known for its amazing rock formations known as fairy chimneys. Erosion has given the cream-coloured rocks here some peculiar shapes, sometimes resembling minarets and other times mushrooms. To admire them in all their glory, follow the trekking route that surrounds them or hop on a hot-air balloon and float above them; the view at sunrise or sunset, with the chimneys bathed in an apricot colour, is spectacular. Many metres below the ground, there are hundreds of cave houses, churches and even entire cities built from soft volcanic rock by Bronze Age settlers. 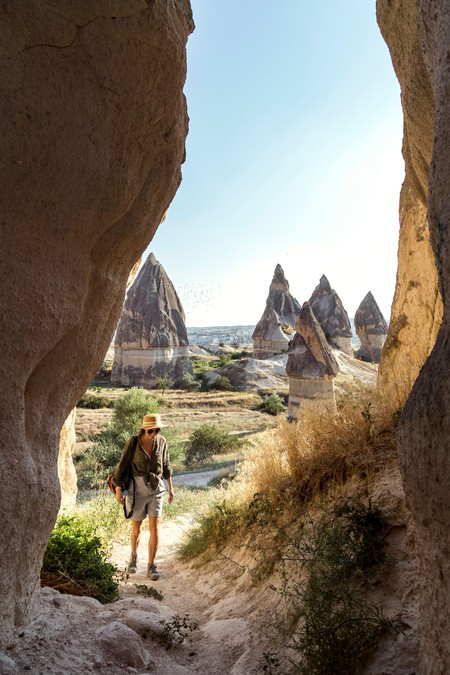 If you’re visiting Turkey, don’t miss the awe-inspiring pools of Pamukkale (which means cotton castle in Turkish). Here, mineral-rich water spills over basins of white travertine on a cliffside. The basins appear to be cascading over the cliff, but at the same time they are frozen, creating a snow-like landscape of petrified pools and waterfalls. Don’t miss the ancient ruins of the Greco-Roman spa town Hierapolis built at the top of the site, where you can actually bathe in Cleopatra’s hot bath, said to be a gift from Mark Antony. The 36C (97F) waters are guaranteed to take your troubles away. 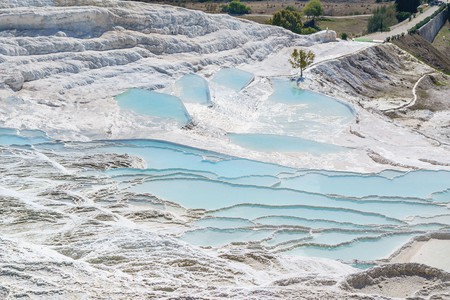 Along the 500km (311mi) Lycian Way lies a pristine sand-and-pebble beach with clear emerald waters, surrounded by colossal cliffs and accessible only by boat (either from Ölüdeniz or the port city of Fethiye). This idyllic spot has a campsite and beach bar, while giving you the chance to attend a yoga class beneath the trees. But just behind the beach, in the Butterfly Valley, is where the real magic happens. Home to 100 butterfly species – including the endemic orange, black and white Jersey Tiger – it’s been a protected area since 1987. There’s also a dreamy waterfall tumbling from a 350m (1,148ft) high canyon wall. 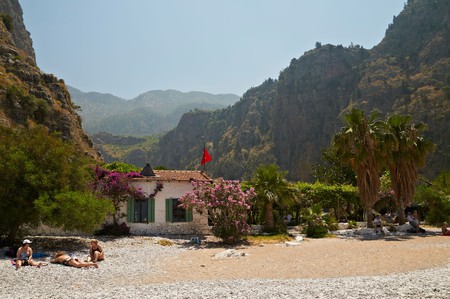 The old fishing village of Kaş is one of those seaside towns that hasn’t yet been affected by the downsides of tourism. Serving as a haven for hippie travellers and bohemian Turks, this coastal gem is not only a top scuba-diving destination – the bright blue sea surrounded by verdant hills – but also a place of gorgeous architecture and rich history. Next to the bougainvillea-covered, white-washed houses and their colourful, Ottoman-style, wooden balconies, you will find oceanside restaurants and several ancient sites, including the ruins of Antiphellos (home to a well-preserved theatre) and the fourth-century BCE Lion Tomb. 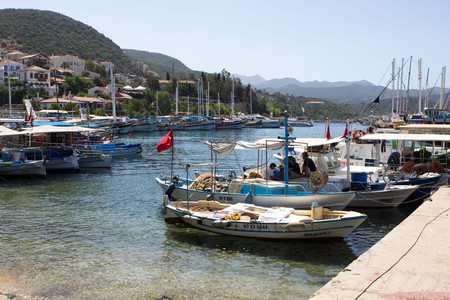 Once a flourishing naval and trading port, Patara, on the southwest coast of the Lycia region, is now a stunning retreat, mostly known for its 12km (7mi) long beach. A wide stretch of cream-coloured sand blends into green dunes and pine trees. You will also see marshes and lagoons here, along with a variety of birds and other wildlife such as loggerhead turtles. The ruins of the ancient city of Patara are a 15-minute walk away, and include an amphitheatre and a parliament building. Apollo’s temple is also said to be lying somewhere beneath the sand, although it is yet to be discovered. 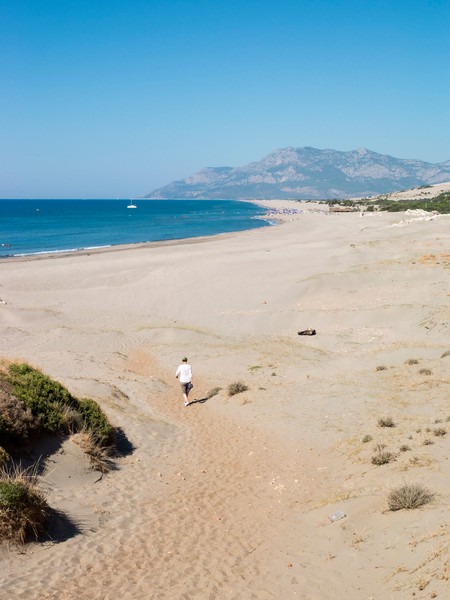 If you’re after action, Köprülü Canyon National Park could be your go-to paradise. Sitting in a fertile valley in the Antalya province, the park covers 366sqkm (141sqmi), and includes all kinds of mind-blowing scenery – from virgin forests to flowing rivers and waterfalls. The star of the park is, of course, the Köprülü Canyon. This stretches for 14km (9mi) along the Köprü River and offers plenty of opportunities for climbing, hiking and biking, as well as kayaking and rafting in the river. Camping is also an option here – one that comes with star-watching opportunities – while, nearby, there are various restaurants serving delectable fish. 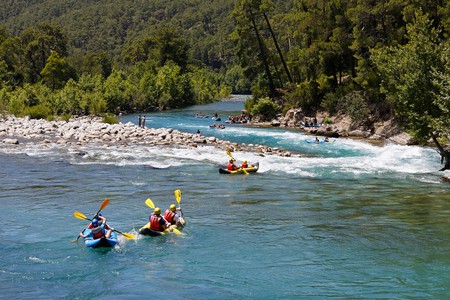 This national park – declared as such in 2000 – stretches over the Küre Mountains, west of the Black Sea Region. The terrain is diverse ranging from forests and meadows to rivers, caves and rugged areas. Its highest point is Yaralıgöz Mountain (at 2,019m/6,624ft) sitting between the towns of Devrekâni and Abana. Wildlife thrives in this diverse landscape; more than 129 bird species, nine amphibian species and 48 mammal species have been documented here so far. Don’t miss the chance to hike among the coves, cliffs and streams – it’s a sight to remember. 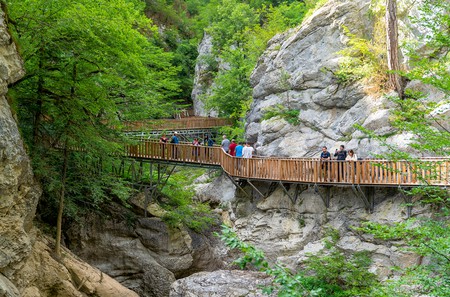