The 10 Best Restaurants In Sinop, Turkey 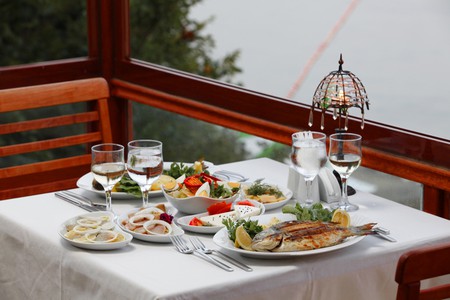 Sinop, a historic port city nestled on northern Turkey’s Black Sea coast, was recently named the country’s happiest city. One look at its local dining scene and it’s not hard to see why. Fresh, locally caught fish dishes are accompanied by mouthwatering meze and Sinop’s favorite delicacy, manti. Read on for The Culture Trip’s roundup of the city’s 10 must-try restaurants.

Restaurant, Seafood, Turkish, Halal
Facebook
Email
Twitter
Pinterest
Copy link
Share
Map View
Nestled on the edges of the Black Sea, fresh fish and seafood are naturally a focus in Sinop, and Okyanus Balik Evi is the perfect place to try it. Bustling and casual, the popular local restaurant serves a range of meze dishes and entrées, and though Okyanus Balik Evi’s menu changes on a daily basis according to available fresh produce, guests can expect classic Turkish small plates like fish soup accompanied by cornbread and fried pickles, followed by main courses like anchovies, turbot and wild sea bass. Head to the restaurant’s top floor where gorgeous views of Sinop and the Black Sea greet guests as they dine.
Open In Google Maps
Kurtuluş Caddesi, Sinop, 57000, Turkey
+903682613950
Visit Website
Give us feedback 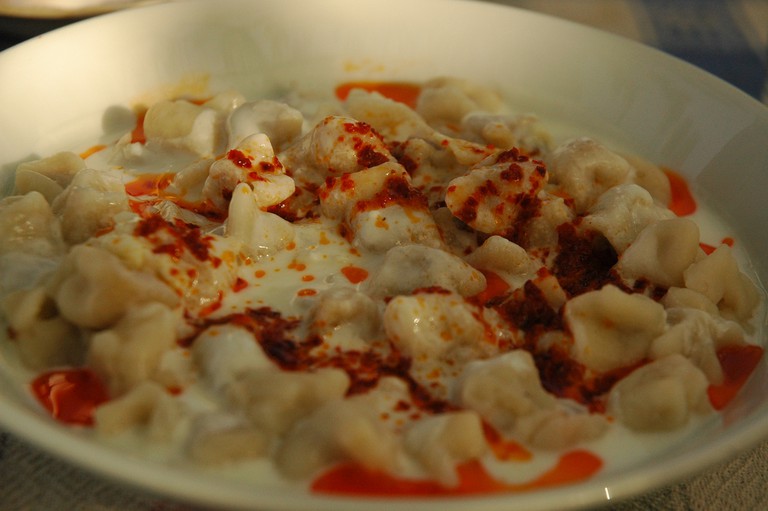 Manti | © Ekke/Flickr
Opened in 1992, family-run restaurant Sinop Örnek Manti has been serving its menu of local, specialty dishes for over two decades. As its name suggests, manti, the popular Turkish meat-stuffed dumpling-like dish, is its forte (opt for it topped with either walnuts or garlic yogurt), but plenty of other classic dishes feature on Sinop Örnek Manti’s menu. For example, there are soups, pasta and börek alongside tempting desserts like sütlaç, a traditional rice pudding-like dish, and lokma, a deep-fried Turkish take on the donut.
Open In Google Maps
3 Bülent Ecevit Caddesi, Sinop, 57000, Turkey
+903682613253
Give us feedback

Located within the modern Antik Otel, Alakart Restaurant boasts a stylish, cozy interior complemented by a gorgeous terrace overlooking the sea and a menu brimming with delicious fish and seafood dishes that perfectly pair with its sea views. Kick start your meal with a selection of appetite-whetting starters before opting for one of Alakart Restaurant’s richly flavored, innovative seafood recipes for a true taste of the bounty that the neighboring Black Sea has to offer. 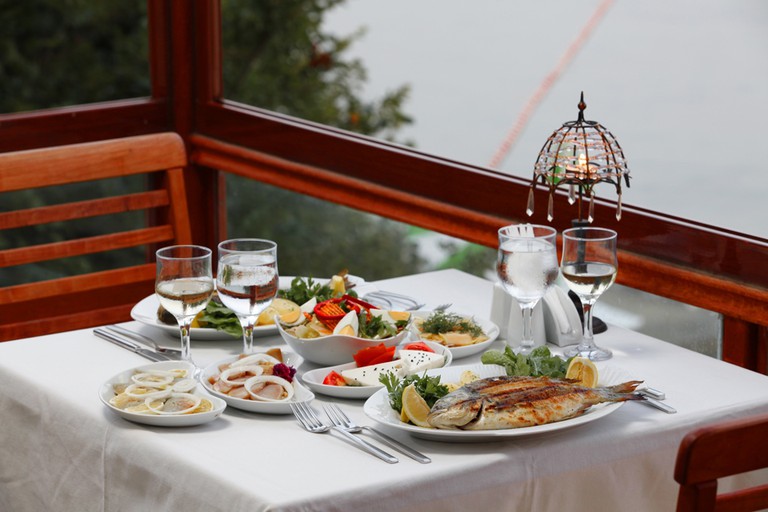 Restaurant, Turkish, Italian, American
Facebook
Email
Twitter
Pinterest
Copy link
Share
Map View
Nestled on the edges of the marina not far from Sinop Castle, Gelenbevy is a café and restaurant open all day. A breakfast buffet kicks off the restaurants activities, followed by a menu with a distinctly eclectic, international bent, so while guests will find plenty of Turkish dishes, local seafood, doner kebabs and manti included, there’s also many other options to choose. For instance, the menu boasts Italian-inspired pasta like farfalle with salmon and American-inspired eats like chicken wings, plus a range of indulgent desserts including berry cheesecake.
Open In Google Maps
4/A Meydankapı Mahallesi, Bülent Ecevit Cd., , Sinop Merkez/Sinop, 57000, Turkey
+903682505755
Give us feedback 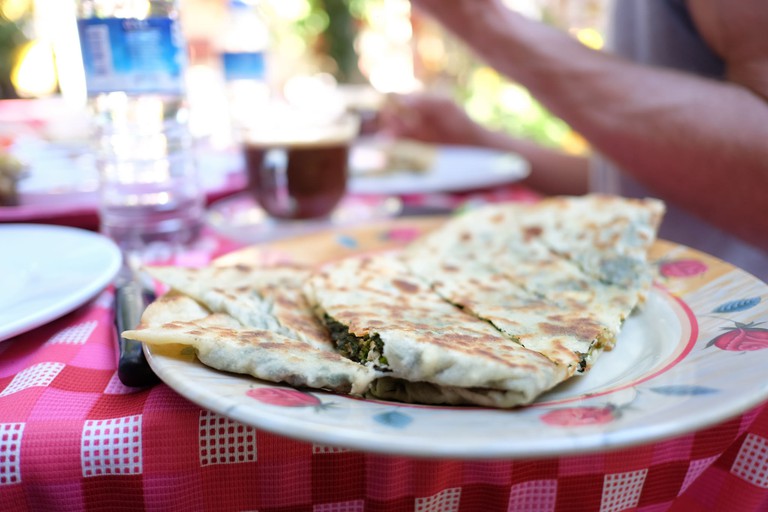 Spinach and cheese gözleme | © Tim Lucas/Flickr
Often hailed as cooking up the best manti in town, Teyze’nin Yeri is the place to head for Sinop’s favorite local delicacy, but at this popular restaurant, there’s an added extra bonus. As its culinary staff prepares the dish in the middle of the dining room, guests can get up close and personal to the manti-making process. Top your manti with yogurts and walnuts and team with other dishes like gözleme (with cheese or sugared walnuts), börek, köfte and Circassian chicken.
Open In Google Maps
Gazi Caddesi, Sinop, 57000, Turkey
+903682617368
Give us feedback 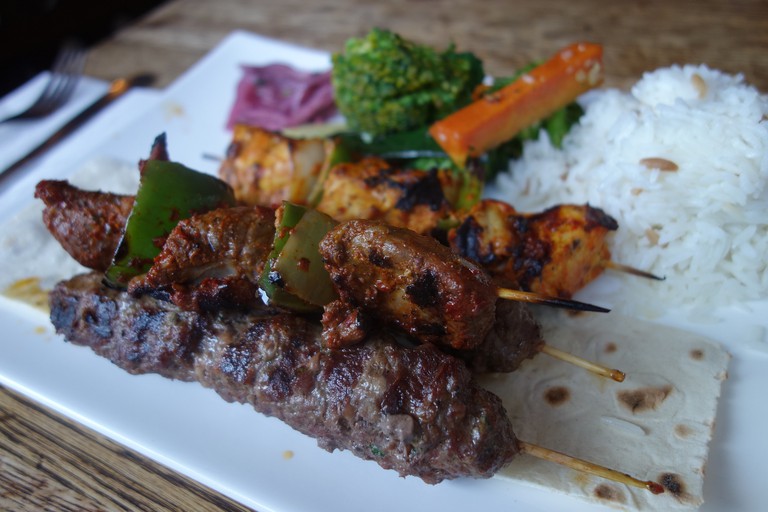 Kebabs | © kennejima/Flickr
For a culinary tour of some of northern Turkey’s most favorite food, look no further than Mavi Ay, a casual, laid-back restaurant close to Sinop’s pretty marina. Go for breakfast and get a hearty, wholesome start to the day with a plate of menemen (a Turkish take on scrambled eggs with peppers and herbs) or go later in the day and dine on meaty options like Adana-style kebabs, köfte and steak or opt for a fish dish, there’s anchovies, calamari and scorpion fish to choose from, or Sinop’s gastronomic staple, manti. Finish with a classic dessert of künefe for a truly Turkish dining experience.
Open In Google Maps
No:9 Bülent Ecevit Caddesi, Sinop, 57000, Turkey
+903682618160
Visit Website
Give us feedback

Diner, Hotel Restaurant, Pub, Restaurant, Turkish, Mexican, Argentina
Facebook
Email
Twitter
Pinterest
Copy link
Share
Map View
Flavor, quality and an extensive menu of Turkish and global cuisine are what sets Lakerda – one of Zinos Hotel’s two resident restaurants – apart from other local eateries. The restaurant’s eclectic menu has something to suit every diner from appetizers including Argentinian-style filo pastry stuffed with vegetables and cheese or almond shrimp to main courses like the Mexican-inspired chicken quesadilla, köfte and beef stroganoff. There are also plenty of seafood dishes such as grilled sea bream served with seasonal vegetables and scorpion fish fajitas with guacamole and sour cream.
Open In Google Maps
Sinop, 57000, Turkey
+903682605600
Visit Website
Give us feedback

First opened in Istanbul in 1967, Tarihi Sebat Lokantasi is today a successful small group of restaurants boasting four locations in its hometown and a brand new locale in the heart of Sinop. The focus is the regional cuisine of Turkey’s Trabzon province with plenty of carnivore-friendly dishes like Akçaabat meatballs, Albanian-style liver and kebabs with béchamel sauce alongside classic seafood like anchovies and sides that include rice and bulgur pilaf, pumpkin moussaka and Turkish bean stew.

Restaurant, Turkish
Facebook
Email
Twitter
Pinterest
Copy link
Share
Map View
Located around half an hour’s drive from Sinop in the small town of Erfelek, Öztürk Restaurant is a lovely rural retreat away from the hustle and bustle of the city. Its hearty, rustic breakfasts make it a popular stop-off for travelers to refuel before exploring the beautiful nearby Erfelek Waterfalls. Choose from a range of local breads, homemade preserves like fig jam and apple molasses, fruit, eggs and cheeses alongside hearty plates like tirit, a traditional Turkish recipe of leftover bread, which Öztürk Restaurant cooks with chicken and beef.
Open In Google Maps
Hal Yeri, Sinop, 57800, Turkey
+903685113738
Give us feedback
Give us feedback