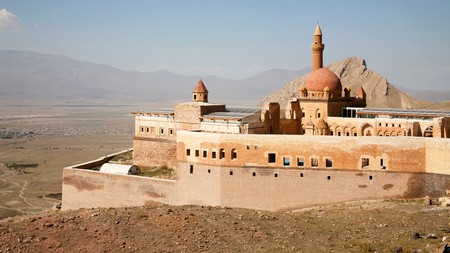 Bordering Georgia and Armenia, Northeast Turkey is where the Anatolian steppe and the Caucasus meet, with romantic ruins and alpine meadows. Here’s how to explore the area, including Ani, an amazing medieval Armenian capital and Silk Road hub, and nearby Kars that was once part of Russia and has the architecture to prove it.

Hiding amid the Anatolian steppe, the southern reaches of the Caucasus and the Black Sea hinterland is one of Turkey’s most rugged and mysterious areas. Against a backdrop of snowy mountains and windswept plains, explorers can discover the eerie ruins of Ani, Kars’s elegantly decaying Russian architecture, the Kaçkars’ alpine pastures, relics of medieval kingdoms and rumours of Noah’s Ark.

Erzurum is the best gateway to the region, with AnadoluJet, Pegasus Airlines, SunExpress and Turkish Airlines flights from Istanbul, Ankara, Izmir and Bursa; daily trains from Ankara; and long-distance buses from across Turkey. Car hire is available here through operators such as Economy Car Rentals. 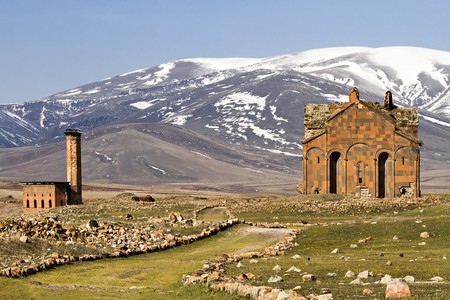 The ruined city of Ani in Kars, Turkey was once home to around 100,000 people | © Ozbalci / Getty Images

In a windblown corner of the Anatolian steppe, hard against the gorge defining the closed Armenian border, lies one of Turkey’s most atmospheric ruined cities. Long grass sways around the earthquake-shattered husks of this medieval Armenian capital and Silk Road trading hub. Once home to around 100,000 people, the wind whistles through the millennium-old Armenian Orthodox cathedral and churches. The pervasive historical mystery begins on entering through the Aslan Kapısı (Lion Gate), named after either its aslan (lion) relief or the Seljuk Sultan Alp Arslan, who conquered Ani in 1064. Beyond, visitors can take the walking trails to explore the scattered remnants of churches, mosques, a convent, hammam, fortress and palace – traces of Ani’s Armenian, Byzantine, Seljuk, Georgian and Mongol rulers. There’s a lightning-cleaved Armenian rotunda church, the riverside remains of a Silk Road bridge and the columns of a Zoroastrian fire temple. Evoking the deserted planets, lost civilisations and ghost towns of the silver screen, Ani’s visceral impact makes it one of the region’s most romantic ancient sites.

Get there from Kars, 50 kilometres (31 miles) west, with English-speaking guide Celil Ersözoğlu (0532-226 3966; celilani@hotmail.com). He can either drive you or guide you around the site as well. 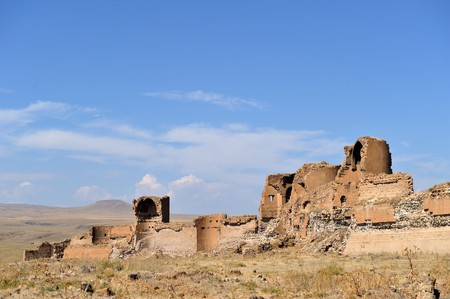 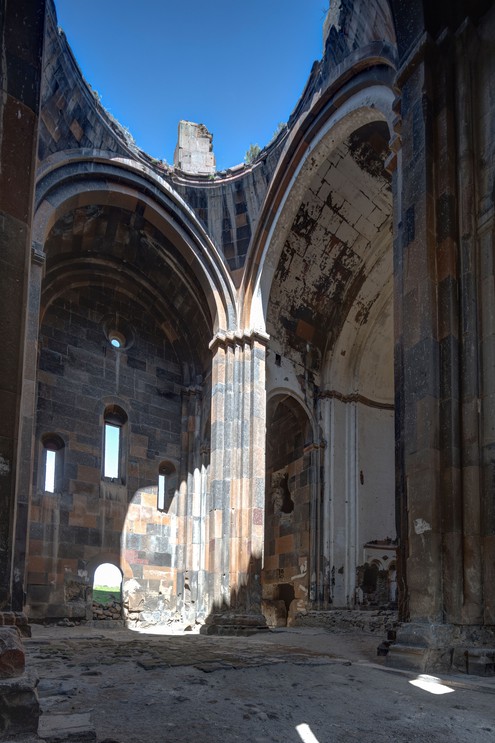 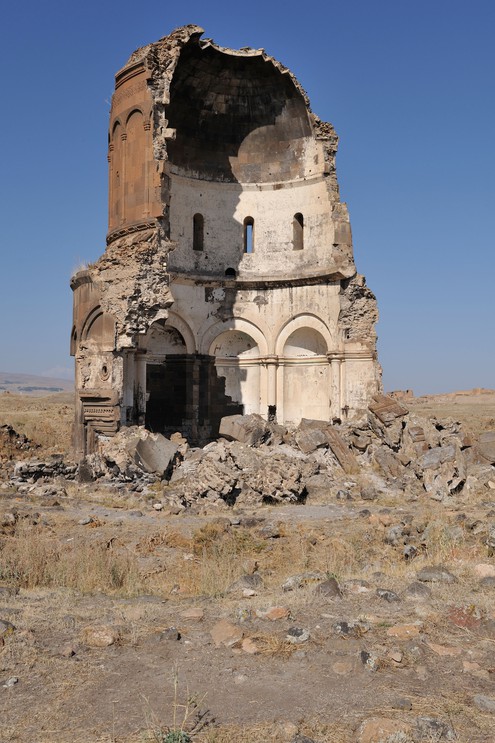 The wintery setting of Orhan Pamuk’s 2002 novel Kar (Snow), Kars was occupied by Russia from 1878 to 1920 and has a Russian flavour to its Baltic architecture. Overlooked by the imposing 12th-century castle, an architectural walking tour of the centre highlights grand stone edifices dating to the occupation. The yellow and white Old Governor’s Mansion, the Health Directorate Building’s columns and floral motifs, the L-shaped Revenue Office and the Azerbaijani Consulate are all on Ordu Caddesi. Continuing the Russian theme, the boutique Kar’s Otel occupies a 19th-century mansion, while Hotel Cheltikov and Hotel Katerina Sarayı are both former hospitals, and the samovar-decorated Pushkin Restaurant namechecks the Romantic poet who visited Kars in 1829.

AnadoluJet, Pegasus Airlines, SunExpress and Turkish Airlines fly to Kars from Istanbul, Ankara and Izmir, and there are daily trains from Ankara via Erzurum. The train line from Baku, Azerbaijan via Tbilisi, Georgia is set to start carrying passengers in 2020, while regular buses serve Kars from Erzurum and beyond. Kars car rental agencies are unreliable, so it’s best to hire a driver such as Celil Ersözoğlu. 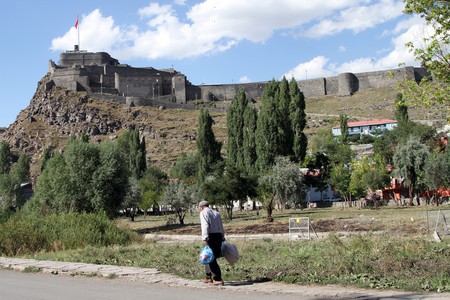 A man walks past Kars Fortress, which was built in 1153 | © Dominic Dudley/Pacific Press/LightRocket via Getty Images

The mountains around Kars are dotted with Armenian and Georgian churches; many are used as barns or just left to decay in remote Kurdish villages. Spending a day or two finding these relics of medieval kingdoms is an unusual excursion, with Bagnair Monastery, Oğuzlu Church and Kızıl Church located en route to Ani. Others are found south of town in mountaintop villages Keçivan and Çengilli. The D060 west to the Kaçkar Mountains take visitors past a string of ruins, such as Öşkvank Cathedral and Dörtkilise Church, which date back to the area’s days under Georgian Bagratid rule.

To experience how the locals make the most of Kars’s extreme winter temperatures (the mercury plummeted to -35C (-31F) in 2015), take a day trip 60km (37mi) north to frozen Çıldır Lake for sleigh rides and ice fishing in February and March. Serene Çıldır is Turkey’s largest natural lake after Van, with summer activities including birdwatching on a causeway-connected island and eating lake carp in village restaurants on the eastern shore. There’s also winter fun between December and March in Sarıkamış, 55km (34mil) southwest of Kars, which has a ski resort and a few hotels catering to skiers. Sarıkamış has a background of rugged mountains, lonely steppe and historical dramas; the area is home to Czar Nicholas II’s ruined hunting lodge, a 19th-century Russian Orthodox church (now a mosque) and a memorial to the Ottoman troops who died fighting Russia in World War I. 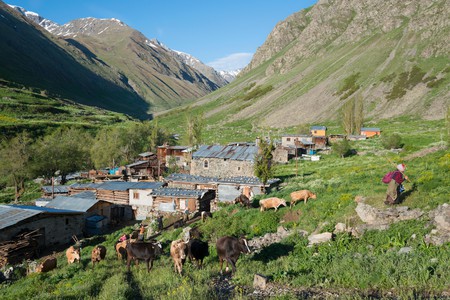 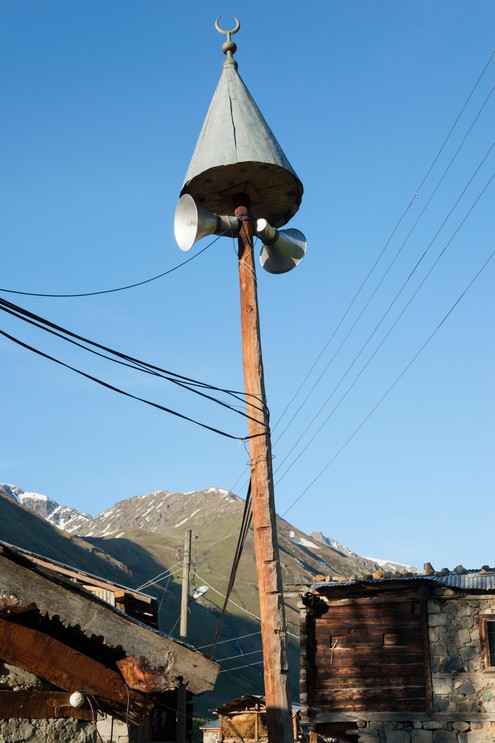 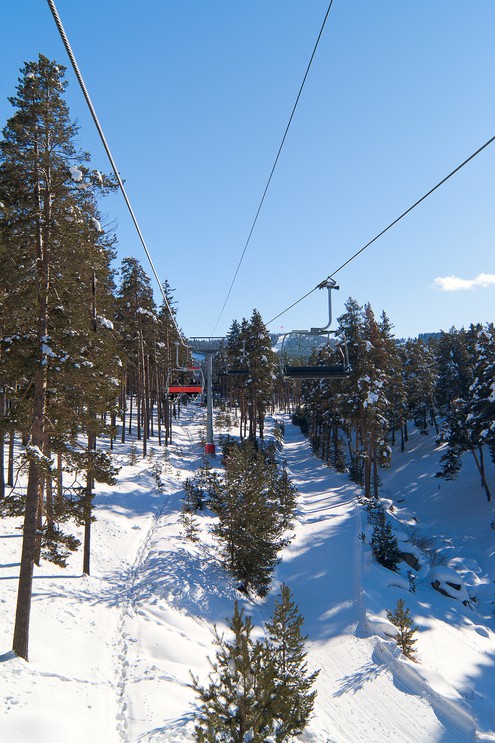 The Kaçkars are a 30-kilometre-long (18.6-mile-long) chunk of alpine scenery in the Black Sea hinterland, with pristine yaylalar (mountain pastures), ramshackle wooden villages and rushing rivers beneath the range’s 3000 metre (9842 foot)-plus peaks. During the hiking season (May to September), ascending the likes of Mt Kaçkar and Altıparmak, or just ambling around the lower forests and valleys, is one of Turkey’s most underrated activities.

The best bases include Yusufeli on the eastern side, from where serpentine roads (and dolmuş minibuses) climb to the increasingly remote mountain villages of Barhal, Yaylalar and, finally, Olgunlar at 2130m (6988ft), where the woodsy Kaçkar Pansiyon is an excellent hiking base. Yusufeli is set to be flooded by a dam by 2025, but for now hotels such as Almatur are good gateways to the mountains. 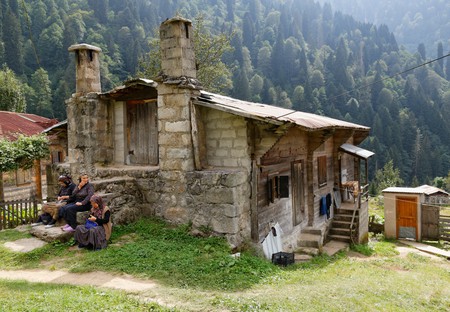 On the Kaçkars’ western side, in the area inhabited by the Hemşin minority, whose culinary speciality is the fondue-like muhlama, the postcard-perfect town of Ayder is enough to make you yodel with its emerald meadows, wood-clad hotels and thermal kaplıca (spa). Serious hikers and white-water rafters also make treks to neighbouring Camlıhemşin, where options including the schoolhouse-set Tașmektep Otel are ideal bases to explore the Fırtına Valley’s Ottoman bridges, ruined castles, tiny villages and high-altitude pastures. It is possible to mount multi-day traverses of the range or its main peaks, but it’s best to enlist the help of a local guide through a company such as Türkü Tourism.

Dolmuşes (shared taxis) run to Ayder via Camlıhemşin from Pazar and Rize, and buses serve Yusufeli from Erzurum, as well as from Trabzon and Hopa on the Black Sea coast. 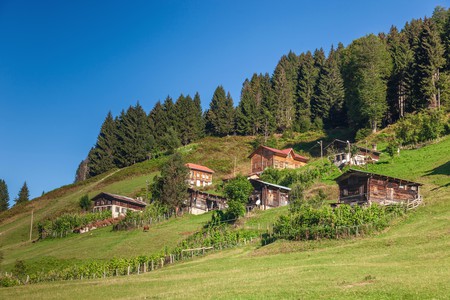 Ayder is a the postcard-perfect town that attracts visitors for its emerald meadows, wood-clad hotels and thermal spa | © uchar / Getty Images

Turkey’s highest mountain at 5,137m (16,853ft) is Mt Ararat. This picture-book perfect white cone has been the subject of all manner of myths and conspiracy theories – most significantly as the possible resting place of Noah’s Ark. British novelist Rose Macaulay wrote, “Mount Ararat, where planks of the ark still, it seems, lie scattered” in The Towers of Trebizond (1956). The nearest Turkish town, Doğubayazıt, still teems with claims about various ark sites.

The top of the mountain has been out of bounds for several years, although there are hopes it will reopen; either way, it’s best to attempt the arcane permit-application process and the challenging ascent with a local guide, such as Zafer Onay (0551-111 8998; zaferonay@hotmail.com). For most visitors, it’s satisfying enough to take in views of Ararat’s cloud-wreathed flanks, which are also a dominant feature of Yerevan, Armenia, from far below. 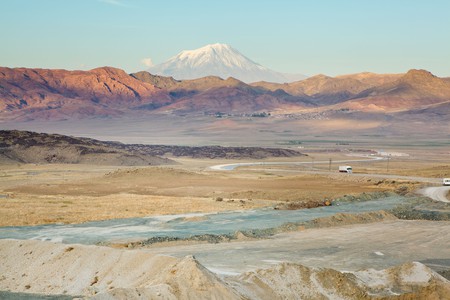 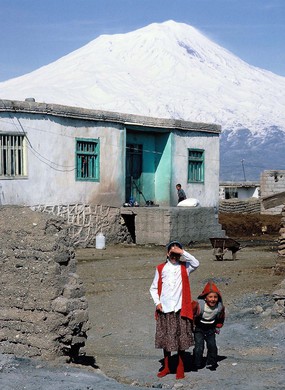 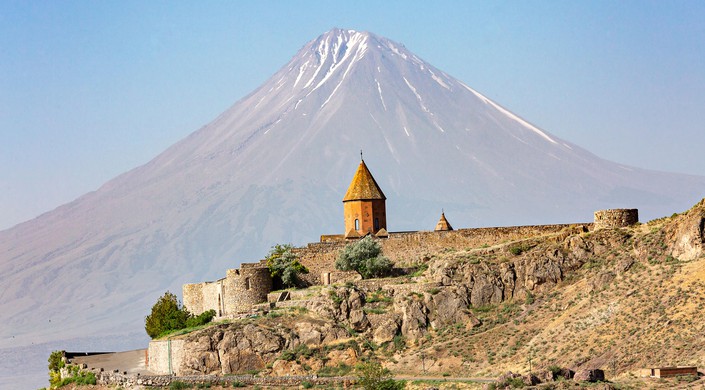 While in Doğubayazıt (known as ‘doggy biscuit’ in the hippy days), climb the ridge to the romantic towers, domes and courtyards of İshak Paşa Palace, built by the 18th-century Kurdish chieftain of the same name. A mix of Middle Eastern architectural styles fit for Aladdin and Ali Baba, visitors can gaze across the hazy Anatolian plains at Mt Ararat. About 20km (12.4mi) east of Doğubayazıt, there’s another possible ark site, a clearly defined boat shape on a mountainside. This Nu’hun Gemisi (Noah’s Ark) site is near Üzengili village, a few kilometres south of the E80 toward the Iranian border.

Buses connect Erzurum to Doğubayazıt and dolmuşes scoot around the region. Tehran Boutique Hotel is the best place to stay. 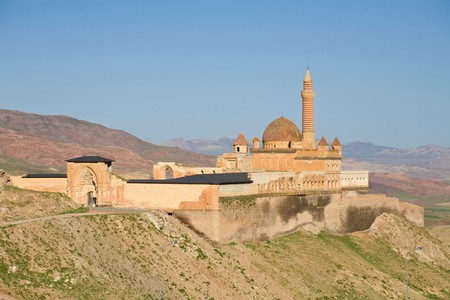 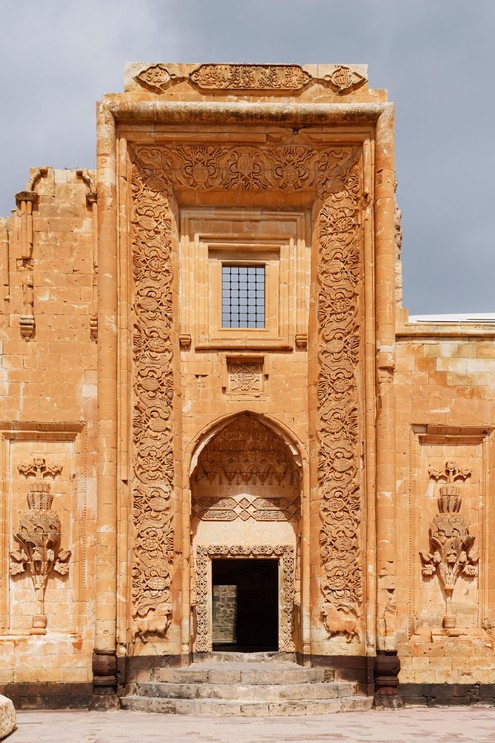 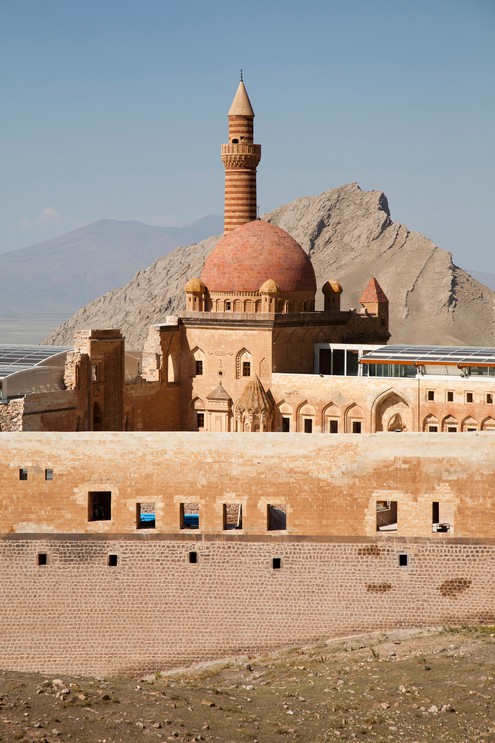