Islamic Belief: In the Whirl of a Dervish 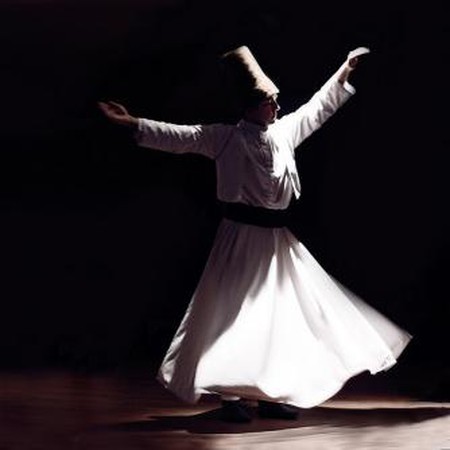 Known for the whirling dance of meditation, Dervishes are devoted followers of Islamic Sufism.

The Dervishes make up an order of Sufism, one of the many branches of Islam. The Sufi way of life is to love and serve other people, deserting personal desires in order to reach perfection and become closer to Allah. Followers of the Dervish order can be found throughout North Africa, Turkey, the Balkans, Iran, Pakistan, India, Afghanistan and Tajikistan.

Supporters of Rumi, also known as Mawlana Jalel ad-Din Muhammad Balkhi or Mevlevi – the great mystic Persian poet born in 1207 – founded the Dervish order. Rumi was an ascetic who lived in seclusion and practiced abstinence, seldom eating, sleeping and talking, while he composed his works. His way of life became their inspiration.

The formal practice of Sema, or whirling, is still practiced by the Turkish Mevlevi Dervishes and emerged as an active form of meditation. For this ceremony, the Dervish wears a black cloak (symbolizing the grave), a tall brown hat (symbolizing the tombstone) and a white robe to symbolize death. The ritual of ‘whirling’ brings the Dervish into harmony with nature while they thank Allah, their Creator, and pray to him. Sema unites the three fundamental components of human nature: mind, heart and body. Following the highly active ceremony accompanied by music and poetry, the Dervishes meditate in silence. Although considered a tourist attraction in places like Istanbul and Damascus, the Dervish continue to practice their religion while Sema ceremonies, such as the ones in the Sudan with the red and green dressed dervish, are still very much part of the Turkish community.