The Lycian Way: Hike Through an Ancient Mediterranean Kingdom 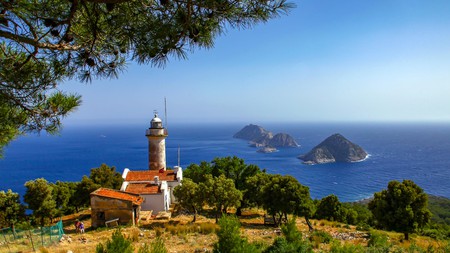 Turkey’s beautiful stretch of Mediterranean coastline was once the stomping ground of the Lycians, whose ancient cities, shrines and tombs can still be seen. Now you can walk the Lycian Way, visit the ruins and get a taste of the unspoilt hill villages that sit above the coast. 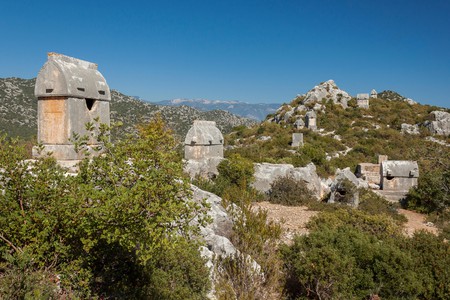 The Lycian Way is one of the world’s greatest long-distance walking trails, winding through 540km of dramatic Mediterranean scenery between the cities of Antalya and Fethiye. The hike meanders through harbour towns such as Kaş and Kalkan, taking in tiny fishing villages and tumbledown hamlets in the foothills of the Western Taurus mountains, where dogs snooze in doorways and the main activity is the call to prayer.

For casual walkers, an appealing aspect of this 29-day waymarked trail is that you don’t have to tackle the whole route to experience the sandy beaches and olive-grove hinterland. Check out the official website or The Lycian Way by Kate Clow, the British amateur historian who created the trail in the late 1990s, and decide which area appeals. Turkish “pension” owners along the permit-free trail will also happily drive your bag to your next stop, making it easy to reach off-the-beaten track spots and arrive at your accommodation in time for dinner and a celebratory Efes beer. 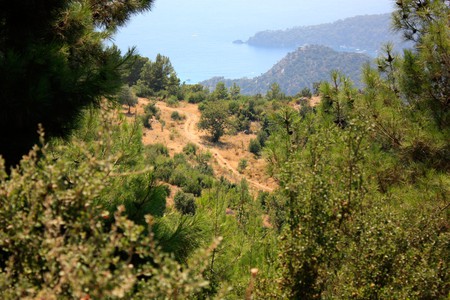 Off the beaten path

One of the secluded stops on the Lycian Way that encapsulates the trail’s appeal is Kaleköy, a fishing village that can only be accessed by foot or boat. The köy (village) of about 150 people is named after its Crusader kale (castle), home to the world’s smallest theatre, which overlooks terracotta rooves and stone staircases cascading down to a cerulean bay. Walking there along the Lycian Way from equally idyllic Üçağız, where the road ends, takes you along a track through the Mediterranean scrub with views of rocky peninsulas and islands. Along the way there’s a boat yard, where the traditional wooden gület yachts that offer the famous Mediterranean ‘blue voyage’ are on stilts and under repair. From here, the path climbs towards the fluttering red Turkish flag atop the castle and emerges on a ridge studded with towering Lycian ‘house’ tombs, with more of the helmet-like stone tombs emerging from the shallows below. 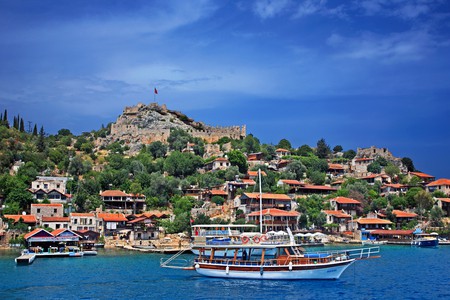 Who were the Lycians?

The Teke peninsula, which the Lycian Way passes through, was the ancient kingdom of this mysterious civilisation, first mentioned in Homer’s Iliad and eventually absorbed by the Roman Empire. The Lycians’ heyday began around 168BCE, when they established the Lycian League, a confederation of more than 20 neighbouring city states: the first proto-democratic union in history. This politically advanced network debated public issues in the world’s first parliament, the recently renovated bouleuterion (council chamber) in Patara, also home to Turkey’s longest uninterrupted beach (18km).

Ancient burial monuments are found all along the Lycian Way, including house tombs, cliff-side tombs with temple facades, sepulchres and sarcophaguses. They rise from the undergrowth and even stand on street corners in the likes of Kaş and Fethiye, which are overlooked by the cliff tombs of kings carved into the rock. 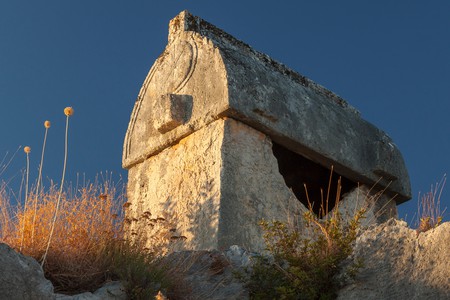 Strewn across a meadow leading to the beach, the ruins of ancient Patara include a 5,000-seat theatre, a colonnaded street with re-erected columns and the harbour, now a reedy wetland. Patara was Lycia’s major port, as well as the 3rd-century birthplace of St Nicholas, the Byzantine bishop also known to us as Santa Claus. In neighbouring Gelemiş, a local farming village, Akay Pension is a wonderful example of Turkish country hospitality, offering home-cooked meals, çay tea and chat from Kazım, Ayşe and family. 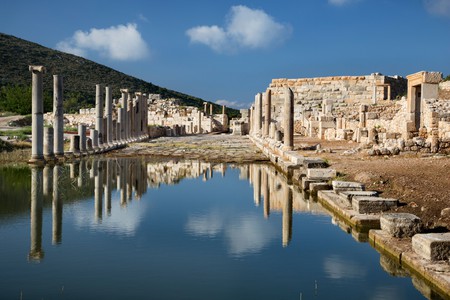 The Lycian Way passes numerous ancient sites, including Letoön, a religious sanctuary dedicated to Zeus’s lover Leto, national deity of Lycia. Just 5km away are the Roman theatre and pillar tombs at Xanthos, which was the grand Lycian capital until Brutus attacked in 42BCE and the inhabitants committed mass suicide. Back in Kaleköy, it’s hard to beat the romance of Turkey’s Atlantis, the ruined Lycian city of Simena, which was submerged by earthquakes two millennia ago. Cruises, fishing boats and kayaks head out to the batık şehir (sunken city) alongside Kekova island, where smashed amphorae, building foundations and staircases disappear into the blue depths. 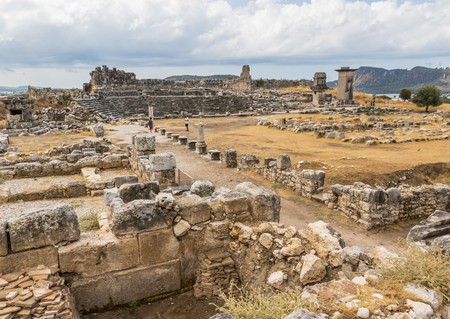 Many Lycian Way stops are less about history than sunbathing, swimming and experiencing the wild Mediterranean countryside, including Butterfly Valley, where sheer cliffs drop down to a golden beach. The campsite here is named after its population of colourful Jersey tiger moths. The only access is b y boat from Ӧlüdeniz or a descent that involves ropes in the steepest sections. Neighbouring Kabak is home to an alternative community, where traditional industries such as farming and beekeeping have been supplemented by a karmic cluster of back-to-nature retreats with yoga studios and rustic cabins, including Turan Hill Lounge.

Olympos is also famous for its hippyish camps where you’ll find “tree house” cabins among the pines, such as Şaban Pension; its Lycian ruins also lead to the beach. Take a walk to neighbouring Çıralı at night to fully appreciate the Chimaera, a group of naturally occurring mountainside flames. Attributed by the Lycians to the breath of a terrible lion-goat-snake monster, the gas-generated phenomenon inspired Olympos to worship Hephaestus (Vulcan), the god of fire. 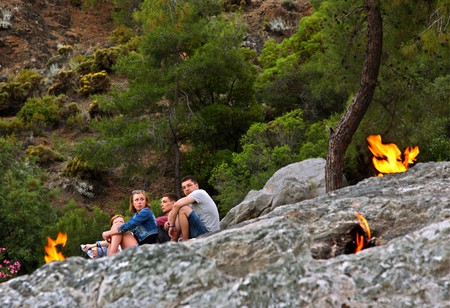 In summer (roughly June to August), temperatures soar over 30°c and you’ll hit the Mediterranean holiday crowds; spring (March to May) and autumn (September to November) are quieter and more temperate seasons to hit the trail. The closest airports are Dalaman, 50km from Fethiye, and Antalya, both of which receive flights from the UK. It’s easy to get around by public dolmuş minibuses, but hire cars are available through the likes of Economy Car Rentals.