The Coolest Neighbourhoods in Amsterdam, The Netherlands 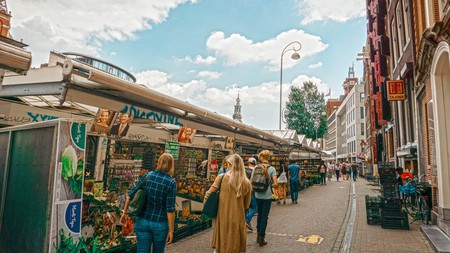 Amsterdam has a lot more to offer than the Red Light District‘s X-rated windows and smoky coffee shops. From its food scene to its raft of museums, boutiques and bustling outdoor markets, this is a cosmopolitan city with a village feel, thanks to its 17th-century Unesco-protected waterways and striking canal houses. To truly get to know the Dutch capital, take the time to explore some of its different neighbourhoods – from bustling De Wallen to uber-cool De Pijp, these are the best neighbourhoods to visit in Amsterdam. 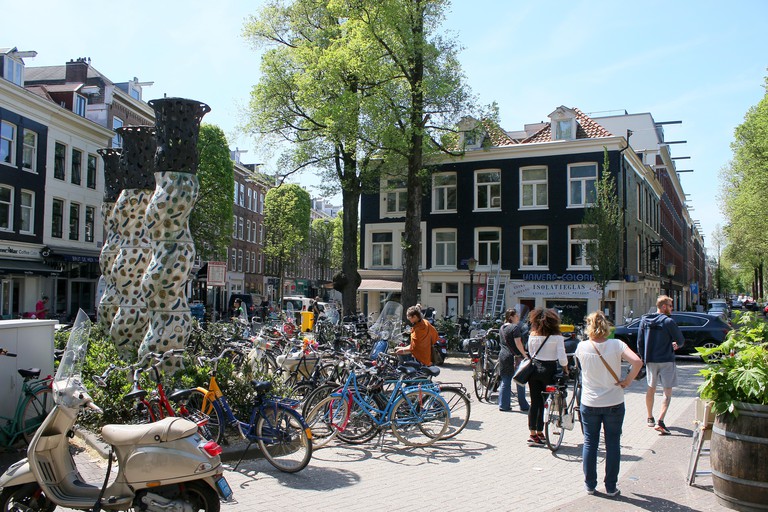 For a long time, De Pijp, like most of Central Amsterdam’s outlying neighbourhoods, housed the city’s working class. It was mainly constructed in the 19th century to fulfil increased demand for housing. Vestiges of this fascinating urban history are still visible throughout De Pijp and the neighbourhood is known for its narrow townhouses, originally built to accommodate low-income families. The whole neighbourhood revolves around Amsterdam’s most famous market, Albert Cuyp Markt, which attracts hundreds of visitors every day. De Pijp is also home to many excellent cafes and restaurants, and is well known by locals for its amazing brunch restaurants, such as Little Collins, Bakers & Roasters and the Scandinavian Embassy. 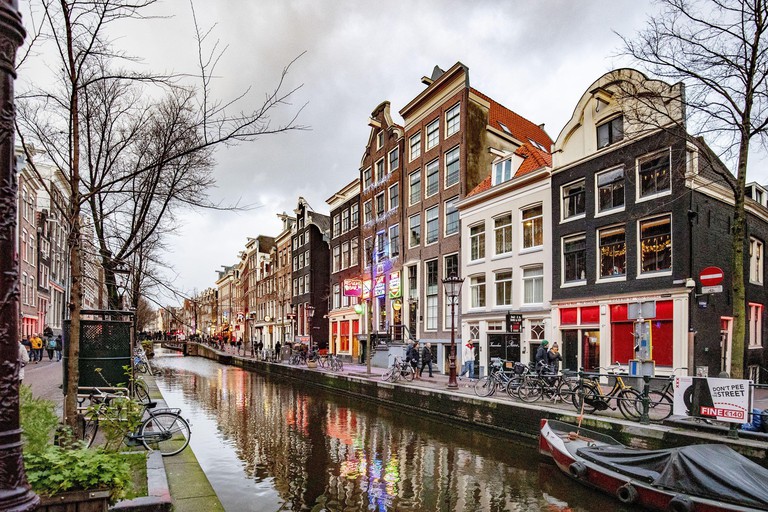 Although De Wallen often gets a bad rap because of its connection with prostitution and drug tourism, it is actually the oldest neighbourhood in Amsterdam, and has been an important cultural centre for over 600 years. Several buildings in De Wallen attest to this long history, such as De Oude Kerk – the oldest building in Amsterdam – and a perfectly preserved clandestine Catholic church, Ons’ Lieve Heer op Solder, located inside the attic of a 16th-century townhouse. Many cultural organisations have moved into De Wallen in recent years. Red Light Radio, for example, broadcasts shows from inside a set of former prostitution windows. Elsewhere in De Wallen, visitors can sample delicious beers at a socially conscious brewery called Brouwerij de Prael, or enjoy vintage coin-op arcade games at TonTon Club Centrum. 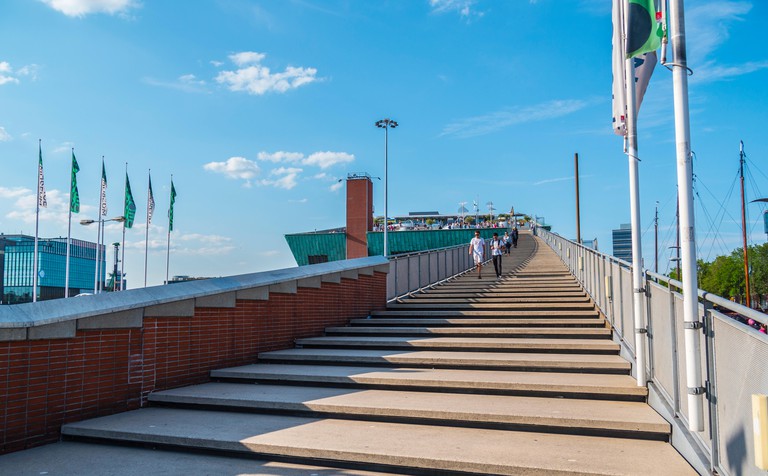 Nieuwmarkt en Lastage trails southwards from Centraal station towards the River Amstel and contains several diverse areas. The northern side revolves around a large, former industrial harbour called Oosterdok, which has developed into one of the most architecturally innovative parts of the city, while its skyline features many impressive, modern buildings, such as the NEMO Science Museum and Amsterdam’s towering central library. Many other cultural hotspots reside beneath these structures, including Mediamatic, an eco-conscious creative initiative. Then there’s the southern inland section of Nieuwmarkt en Lastage, which houses an impressive number of historical sites, such as the Rembrandt House Museum; the first Protestant church in Amsterdam, Zuiderkerk; and several sites associated with the city’s Jewish Quarter. Two regular markets also take place here, namely Waterloopleinmarkt, which centres on second-hand goods, and Nieuwmarkt, which features a wide selection of food stalls. 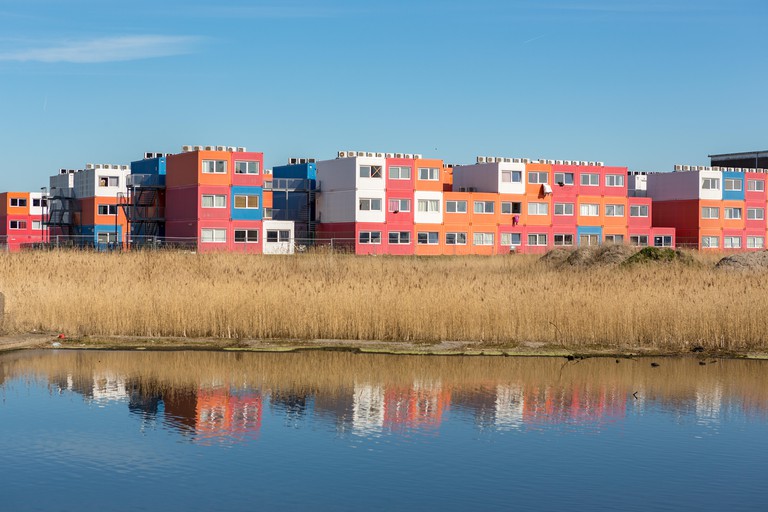 Amsterdam’s northern shoreline has undergone rapid development over the last few decades, turning the former industrial district into a new cultural centre. At the core of these changes are two architecturally stunning buildings located in Buiksloterham – the EYE Film Insititute and A’DAM Toren. Together they contain a wide range of cultural buildings, including cinemas, a film museum, several restaurants and a subterranean nightclub. Heading west, visitors can explore Northern Amsterdam’s rustic industrial landscape at NDSM Wharf, an area renowned for its excellent nightlife, street art and impressive cultural calendar. Although Buiksloterham may appear further afield than other neighbourhoods, a ferry service from Centraal station regularly travels to two ports along its coastline.

Open In Google Maps
Buiksloterham, Amsterdam-Noord Amsterdam, Noord-Holland, The Netherlands
Give us feedback 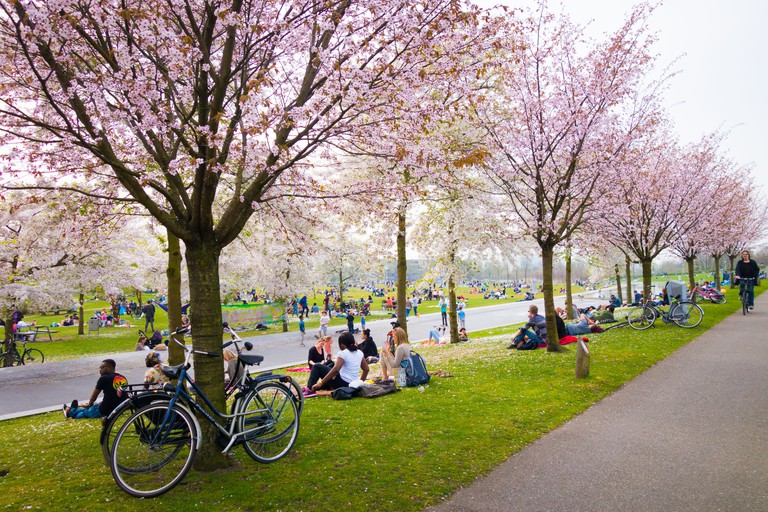 Westerpark, named after the largest park in the neighbourhood, is among the greenest parts of Amsterdam. Besides its wonderful recreation grounds, Westerpark also has an impressive concentration of Amsterdamse School architecture – a style of early 20th-century urban design characterised by red-brick facades and graceful, flowing arches. Elsewhere in Westerpark, visitors can roam through a former gas plant, Westergasfabriek, which has been converted into an enormous, multifunctional cultural centre, or experience Amsterdam’s booming club scene at De Marktkantine. 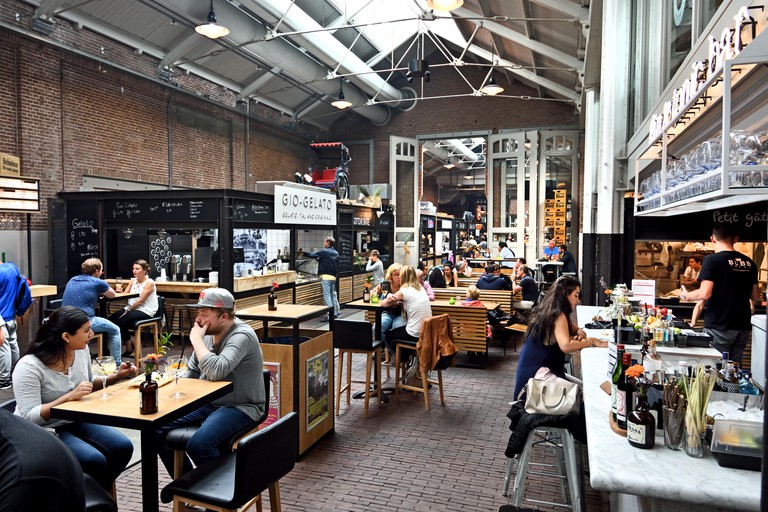 © Peter Horree / Alamy
Vondelpark runs down the eastern limits of Oud-West and the neighbourhood is only a short distance away from Amsterdam’s city centre. Despite its centrality, Oud-West is relatively laid-back and features several wide streets lined with dozens of trendy bars, restaurants and concert venues. Most of these establishments are spread over Oud-West’s main thoroughfares – Overtoom, Kinkerstraat and De Clercqstraat. Each of these roads has its own distinct vibe and its fair share of excellent watering holes. Foodies and cinephiles should definitely stop by De Hallen on Kinkerstraat, which contains a massive indoor food hall where local culinary experts sell their wares, as well as an independent cinema decked out in art deco panelling.
Open In Google Maps
Amsterdam Oud-West, Amsterdam-West Amsterdam, North Holland, The Netherlands
Give us feedback 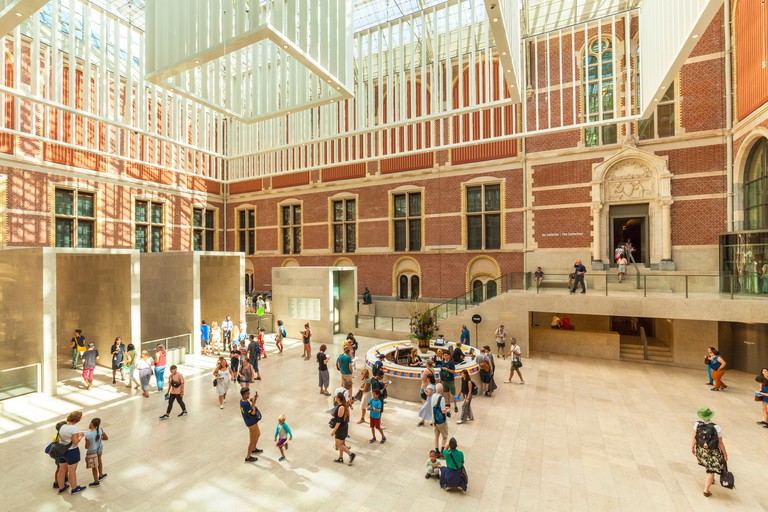 A trip to Amsterdam isn’t complete without a jaunt into Oud-Zuid and its museum quarter. The neighbourhood boasts the Rijksmuseum, which holds Dutch and European art and artefacts from the Middle Ages to the present day. A short walk away is the Van Gogh Museum, the Moco Museum – home to works by Dalí and Banksy – and the Stedelijk, with its large collection of international modern art and design. On Saturday morning, head to zuiderMRKT, a small outdoor food market bursting with selections of cheese, made-to-order crêpes and fresh fruit and vegetables. At night, head to traditional Italian restaurant Le 4 Stagioni for its glorious pasta and pizza selection, before sauntering along to the corner of Cornelis Schuytstraat and Willemsparkweg to grab a drink at one of its brasseries. 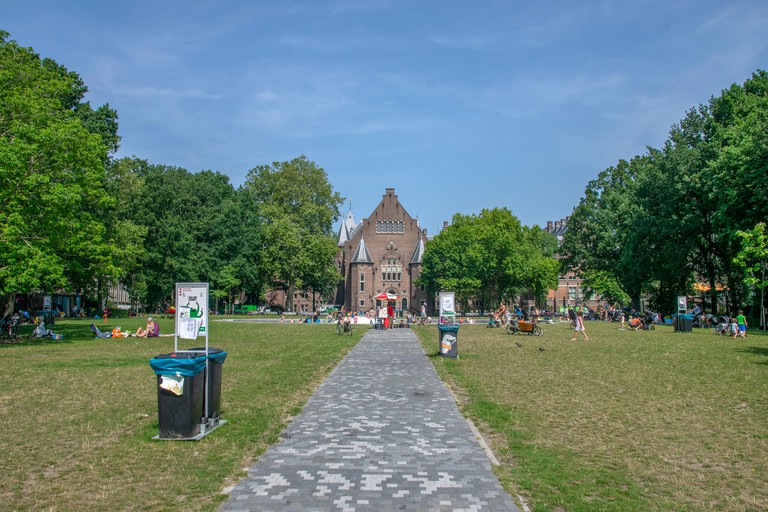 © Robert vant Hoenderdaal / Alamy
Amsterdam Oost is one of the most diverse cultural hotspots in the Dutch capital. Kick your day off with a caffeine hit at Coffee Bru or Bar Bukowski, two of the neighbourhood’s best coffee shops, before visiting Tropenmuseum, one of Amsterdam’s largest museums, where artefacts and art celebrate cultural diversity. The Hermitage Museum is also worth a trip, thanks to the top examples of 17th-century Dutch art on display. If the sun is out, grab some picnic supplies from Gallizia Deli on the bustling Javastraat and hit Oosterpark, the first public park in Amsterdam.
Open In Google Maps
Amsterdam-Oost Amsterdam, North Holland, The Netherlands
Give us feedback 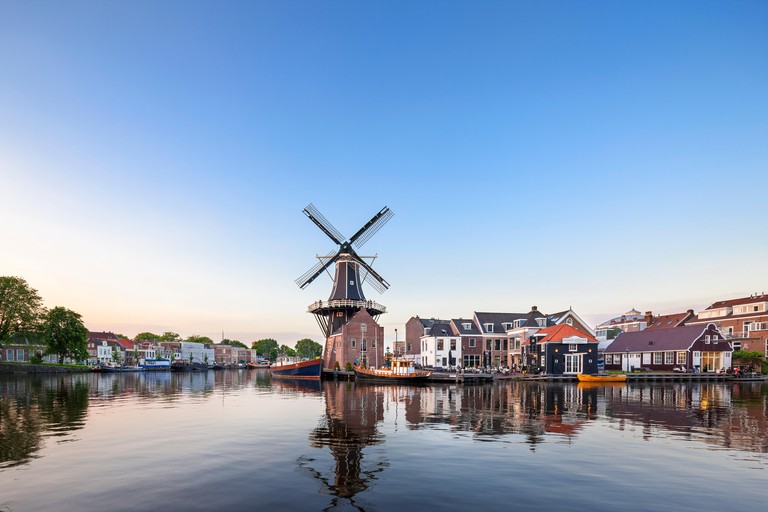 © Wiskerke / Alamy
Hop on a 20-minute train from Amsterdam Centraal station to reach the charming medieval city of Haarlem. Here, you’ll find a spread of museums, historical sites, quirky boutiques and cosy restaurants all within walking distance. Make your way to the Cathedral of St Bavo, the second-largest church in Holland, which is worth a visit for its zany neogothic architecture. Another Instagrammable landmark is De Adriaan windmill, a wooden towered mill originally built in 1778; wind your way to the top floor for spectacular views over the old town. For more great vistas, hit De Dakkas, a trendy roof terrace restaurant inside a huge greenhouse.
Open In Google Maps
Haarlem, North Holland, The Netherlands
Give us feedback 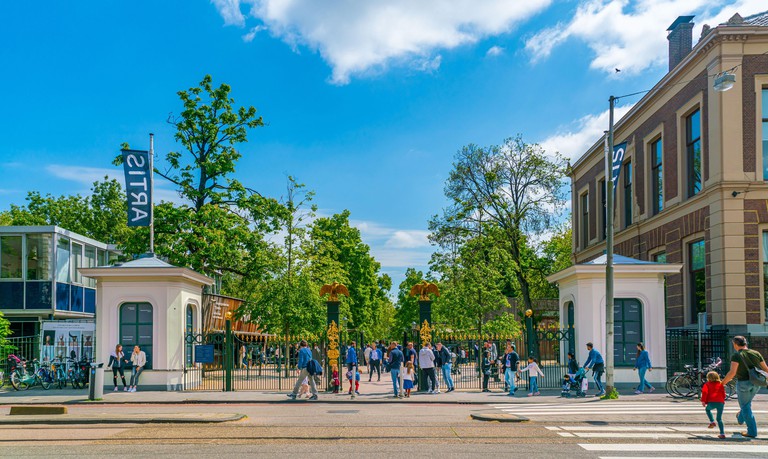 © TravelPhotoExpert / Alamy
Get your nature fix with a trip to Amsterdam’s often overlooked De Plantage district. This leafy neighbourhood – dubbed the Cultural Garden of Amsterdam – is home to Artis Zoo and Hortus Botanicus, one of the oldest botanical gardens in the world, dating back to 1638. Meanwhile, culture comes in the form of the Royal Theatre Carré, the Dutch National Opera and Ballet and the Rembrandt House Museum, which allows you to visit the house where the painter lived and worked. If you love a good bargain, head to Waterlooplein flea market (open six days a week), which has 300 stalls selling everything from vinyl records to vintage clothes.
Open In Google Maps
36 Plantage Kerklaan, Amsterdam-Centrum Amsterdam, Noord-Holland, 1018 CZ, The Netherlands
+31207606800
Visit Website
Give us feedback 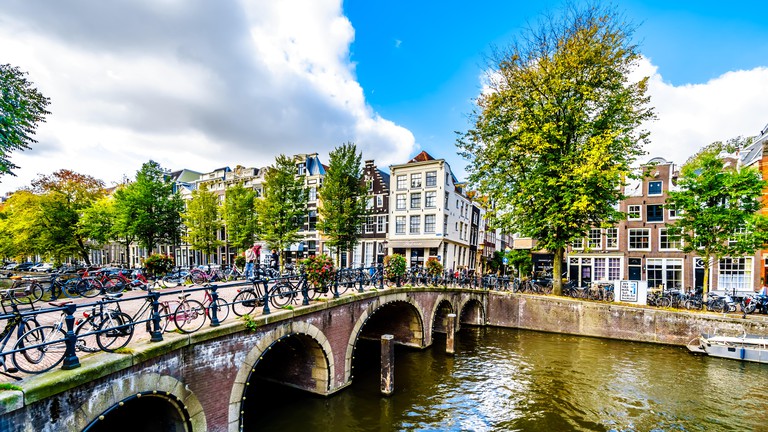 © hpbfotos / Alamy
You’re spoiled for choice in Amsterdam’s vibrant city centre when it comes to cute stores, hipster coffee shops, top-rated restaurants and Instagrammable streets. Come nightfall, this district comes alive. After taking an evening stroll and grabbing a bite to eat, roll into bed at one of the neighbourhood’s many hotels, such as the Hoxton and W Amsterdam.
Open In Google Maps
Amsterdam-Centrum Amsterdam, Noord-Holland, The Netherlands
Give us feedback 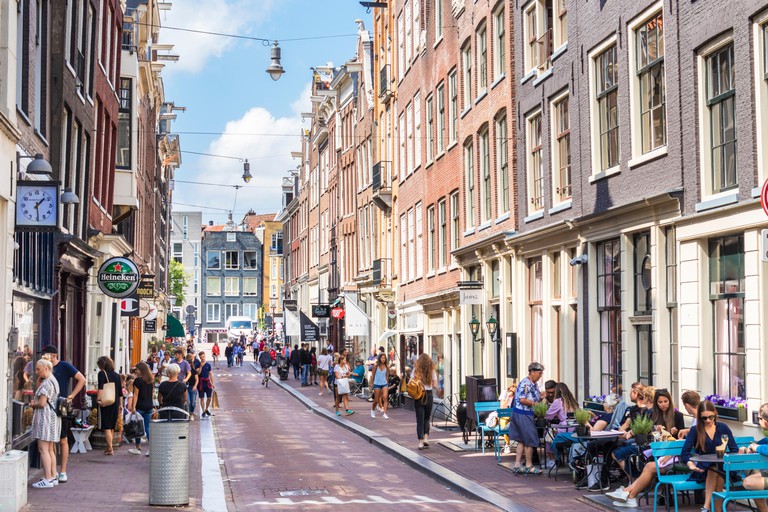 © eye35 / Alamy
This area is one of Amsterdam’s most photogenic micro-neighbourhoods, with cute thoroughfares straddling some of the city’s grandest canals. Spend the day shopping at stores such as Scotch & Soda and Dr Martens, before heading to one of the neighbourhood’s many eateries. Restaurant ‘t Zwaantje, which dates back to 1973, is known for its Wienerschnitzel, mussels and hot apple pie; Bar Brasserie OCCO is loved for its caviar and oysters, and Chocolaterie Pompadour and Urban Cacao are must-visits for sweet treats.
Open In Google Maps
9 Wolvenstraat, Amsterdam-Centrum Amsterdam, Noord-Holland, 1016 EM, The Netherlands
Visit Website
Give us feedback