How to Navigate Transport in Pattaya, Thailand 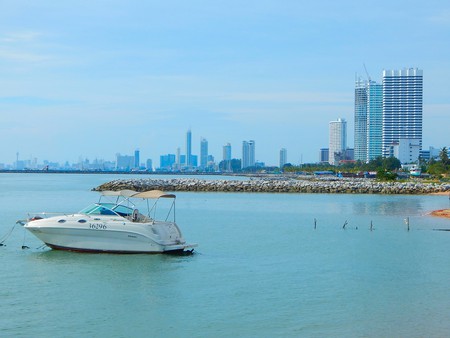 Pattaya is a buzzing city in Thailand’s Chonburi Province. Located on the Gulf of Thailand and known for its energetic night scene, there’s much more to Pattaya than just nightlife and beaches. Public transportation options are limited, with mainly songthaews and a few local buses, but there’s enough to discover the city’s highlights. Renting your own transport provides more freedom. Here’s how to get out and about in Pattaya.

Also known locally as Baht Buses, songthaews are the main form of transportation in Pattaya. They are pickup trucks that have been re-purposed for transporting people, with two benches in the back and space for standing (if you’re brave!) at the end. Cheap and efficient, even if sometimes crowded, songthaews operate on fixed routes around the city. They travel along Beach Road, near Walking Street, along Pattaya 2 Road, around Jomtien, and to Naklua. The fare depends on the distance, but you should expect to pay anywhere between ten and 50 Thai baht. You pay the driver when you get off. Do be sure to have small notes and coins to pay with as the driver’s supply of change will likely be minimal. It’s easy to stop a songthaew – simply extend your arm and wave or otherwise signal that you want to jump on. People get on and off all along the route, but if it doesn’t seem to stop near where you want to disembark, press the buzzer and the vehicle will pull over. You can also negotiate the price for a private taxi-like service with an empty songthaew; this is especially common at nighttime.

Local tip: Check the price before boarding an empty vehicle as drivers may assume that you want to charter the songthaew privately, making for a more expensive trip. Try to flag down vehicles that already have passengers aboard to avoid any misunderstandings. 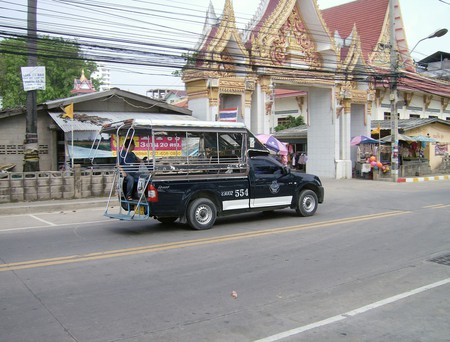 A songthaew driving along the street in Pattaya | © Joseph Hunkins / Flickr

Pattaya has few local buses and routes change and are cancelled fairly frequently. You should check locally during your stay as to local services and times. Generally, buses serve the main roads through Pattaya, Jomtien, and Naklua, with stops at Big C supermarket. Buses are usually colour coded for ease. Although cheap, the hassle of finding out whether buses are operational combined with the fact that services, when running, are infrequent, means that most visitors will be better off mastering the songthaews instead.

Local tip: Ask a bus driver, mall, or larger hotel for a route map and timetable if you want to use buses in Pattaya. 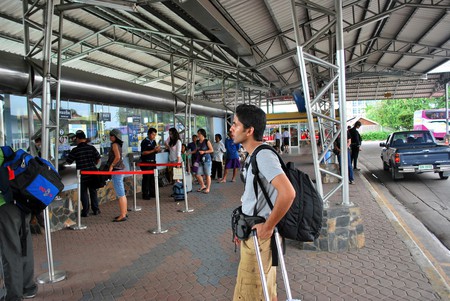 At a bus station in Pattaya | © Harsha K R / Flickr

Although Pattaya doesn’t have many local metered taxis you’ll still spot a fair number of private-hire vehicles around the city. These are mainly taxis that have brought passengers from Bangkok and are seeking a return fare. To kill time, they may take on short journeys around Pattaya. It is rare for drivers to agree to use the meter in such a case, and you should negotiate a reasonable price for your journey before accepting a ride. Taxis taken from along Second Road should generally use the meter, though, as these are local taxis.

There are many private taxi companies in Pattaya that can be great for a day’s sightseeing or long-distance private transfer. Fares should be negotiated if a standard rate isn’t available for a particular destination. Most hotels and guest houses can order a private taxi with minimum notice.

Local tip: Unless visiting a large and well-known attraction or destination, try and show the taxi driver the exact address, written in Thai, to avoid potential confusion. 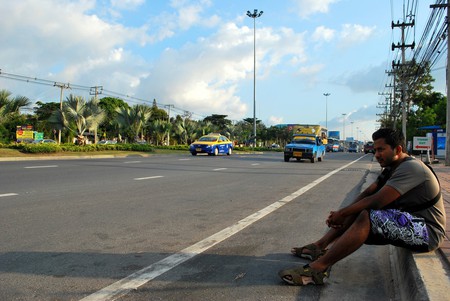 Motorbike taxis seem to be everywhere in Pattaya. They are quick and convenient, and they can be especially cost-effective for solo travellers. Drivers wear bright vests and tend to congregate in small groups on junctions and close to major place of interest. Agree the price before starting your trip, keep your feet up and knees in, hold on to the bar behind you, and always wear a helmet.

Local tip: If you’re in a busy area but can’t see a motorbike taxi or the drivers are some distance away, simply clap your hands two times; as if like magic, a motorbike taxi will likely soon appear! 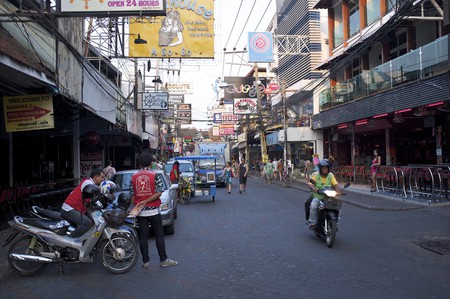 If you want the freedom to explore independently and are confident on two wheels, there are many scooters and motorbikes for rent in Pattaya. Great for beating the traffic and travelling between the different beaches, many solo travellers and couples opt to travel around Pattaya in this way. You should have the necessary licence and insurance before tackling Thailand’s roads. Always wear a helmet. It’s also recommended that you wear closed shoes and long clothing that covers your arms and legs.

Cars are easy to rent in Pattaya too, great for families and those who plan on making lots of day trips out of the city. Driving in Pattaya can, however, be frustrating because of heavy traffic, ill-mannered (and sometimes reckless) drivers, and parking. Remember to drive on the left in Thailand.

Local tip: Scams are rife in Pattaya, albeit not only related to vehicle rental. Don’t leave your passport as security when renting a car, motorbike, or scooter, and thoroughly check the vehicle’s condition before accepting it, noting any defects. 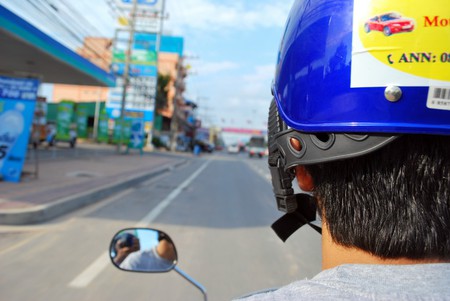 View from the back of a scooter, Pattaya | © Harsha K R / Flickr

Regular ferry and speedboat services connect Pattaya with the nearby island of Koh Larn. Ferries depart from Bali Hai Pier and take around 45 minutes. Speedboat companies can be found along Beach Road, and the crossing time is around 15 minutes. You can also catch a long tail boat taxi.

If you want to cross the Gulf of Thailand, a couple of ferries run each day between Pattaya’s Bali Hai Pier and Khao Takiab Pier in Hua Hin. The crossing takes around an hour and a half, which is much quicker than travelling by land.

Local tip: Be sure to take anti-sickness medication before boarding a ferry or boat if you’re prone to feeling seasick. The Pattaya to Hua Hin crossing can be particularly choppy. 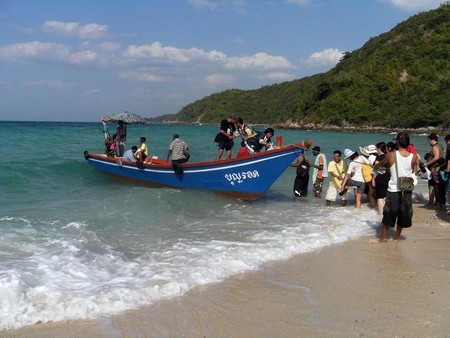 Regular buses and minivans connect Pattaya with other destinations within Chonburi Province, places along the eastern Gulf, Bangkok, and beyond. There are three main bus stations in Pattaya.

Buses run to each of Bangkok’s main bus stations (Mochit, Ekkamai, and Sai Tai Mai) from North Pattaya Bus Terminal. Services are frequent from early in the morning until late at night and there’s no need to book tickets in advance. You’ll also find local songthaews and minivans to various destinations here. To reach Bangkok’s Suvarnabhumi Airport, buses leave from the dedicated Airport Bus Office, located between Pattaya and Jomtien on Thappraya Road. Services are frequent throughout the day and you can buy your tickets in advance for a particular time.

The Provincial Bus Terminal has services to various places in Thailand. You can connect from here to destinations in Northeast Thailand, such as Buriram, Surin, and Ubon Ratchathani, or head north to Chiang Mai, Chiang Rai, and Phrae. Minivans shuttle people down the coast to places like Ban Phe in Rayong, for Koh Samet, and Trat’s Laem Ngop, for Koh Chang.

Many private companies offer door-to-door minivan services between Pattaya and a variety of locations. You can, for example, travel direct between Pattaya and Khao San Road in Bangkok. Tickets are available at the numerous travel agencies and from many accommodations.

Local tip: Take a sweater or light jacket on buses and minivans as the air conditioning can be rather cold! 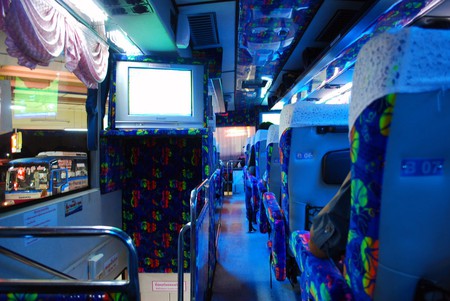 Pattaya is on one of the branches of the Eastern Railway Line. Ordinary trains stop at Pattaya as they travel between Bangkok’s Hualamphong Train Station and Ban Plu Ta Luang in Chonburi Province. Trains are slower than buses but the third-class tickets are very affordable. There are two train stations in Pattaya: the main Pattaya Train Station and the smaller Pattaya Tai Train Station, near Jomtien.

U-Tapao-Rayong-Pattaya International Airport (UTP) is situated some 30 kilometres (18.6 miles) away from Pattaya. Although mainly used as a military airfield, there are domestic commercial airline services that connect Pattaya with other popular destinations in Thailand. Thai Lion Air operates flights to Chiang Mai and Bangkok Airways has flights to Koh Samui and Phuket. You can connect with Chiang Mai, Udon Thani, and Phuket with Thai Air Asia. Minibuses, buses, and trains connect Sattahip with Pattaya.

Local tip: Book a door-to-door minivan from the airport to your Pattaya hotel at the same time as booking your flight for the best chance of getting a good deal. 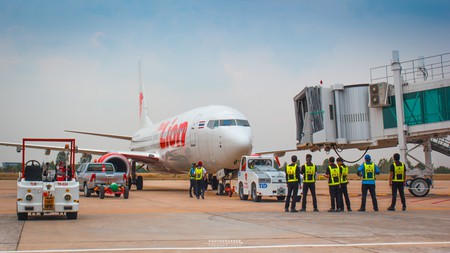 Thai Lion Air is one of the airlines that serves Pattaya's airport | © Rawipad C.KKU / Flickr

The ride-sharing company of Grab operates in Pattaya. Download the app to order a ride and save money. Google Maps is always handy to have, as is a good translation app.

Local tip: Grab’s dispatchers can help out on the phone if there are any language barriers between you and your Grab driver.