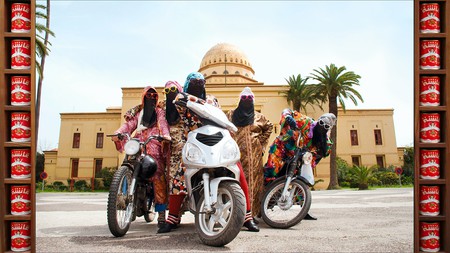 Moroccan-British photographer Hassan Hajjaj is one of the most exciting talents working in Marrakech today. Ahead of his appearance at this month’s Beat Hotel Festival, we caught up with him to talk about his work, how it’s been shaped by the city, and where the best places are to eat, drink, and hang out in Morocco’s cultural capital.

There’s no mistaking Hassan Hajjaj’s photos. A riot of colour and clashing patterns, they look as if his subjects – who’ve included Cardi B and, most recently, Billie Eilish for the cover of Vogue – have taken a wrong turn down a rabbit hole, and stumbled out into a traditional Moroccan souk on mescaline. 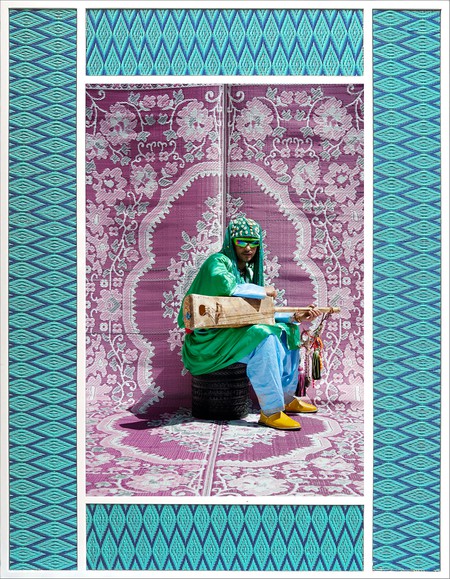 Yet although his style is instantly recognisable, Hajjaj’s work defies easy classification. He combines elements of high fashion with trashy pop culture, mixing luxury brands with obvious fakes, and usually framing the whole thing with repeated motifs made of tin cans. Small wonder then, that he’s been dubbed ‘the Andy Warhol of Marrakech’.

Hajjaj is just as hard to pin down geographically as he is to slot into a particular genre. Partly this is a result of his upbringing. While his heritage is Moroccan, Hassan spent many of his formative years living in London, and currently splits his time “about half and half” between Marrakech and the British capital. But it’s also a result of his unusual career path. Now 59, he came to photography relatively late in life, and almost accidentally. 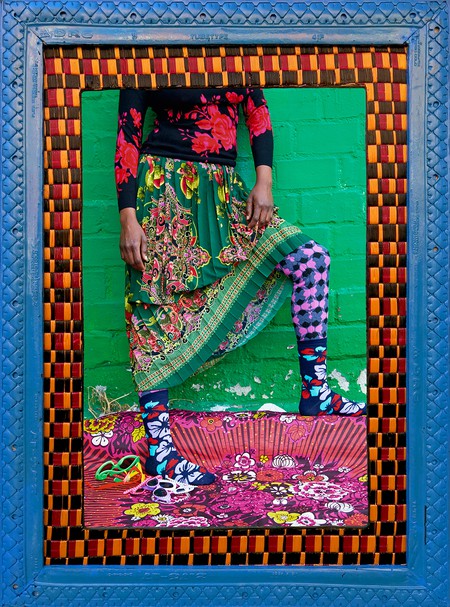 “I got involved in doing lots of underground parties in London in the 80s,” he says, “before during and after [the acid house era].” From 1984 until 1992, he owned a streetwear shop called Rap, “and during that time I became a stylist, I worked on music videos – I got involved with graffiti artists and that sort of thing”. Initially at least, photography was a hobby. “I was just taking photos of fun things, I wasn’t really doing it for work”.

Yet his signature style, a combination of his various eclectic influences, soon began to catch people’s eye – for obvious reasons. Hajjaj describes the way he composes a scene, riffing off big name brands and mixing elements, magpie-like, from Moroccan and British source material, as “sampling”.

“It’s like using a record to make another record. In early hip-hop, you hear samples from James Brown? It’s using that as a blueprint for what I do.” The cans around the frame, for example, which helped earn the first comparisons to Warhol, are influenced by “the repeated mosaic patterns that we have in North Africa”. 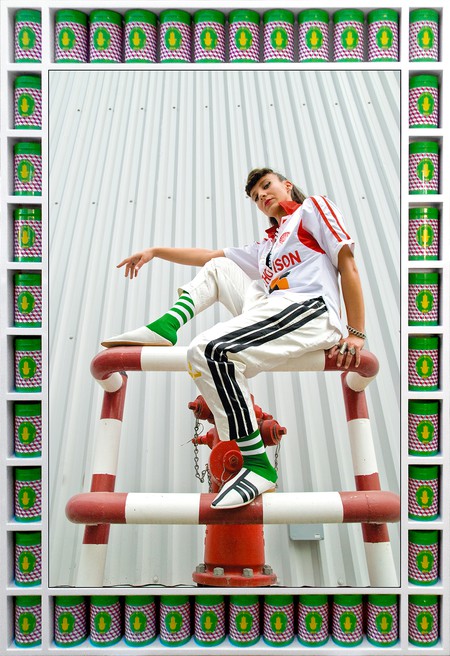 Other influences include “Nick Knight, David LaChapelle, and Martin Parr,” but perhaps less obviously, also “Cartier-Bresson and Robert Capa.” And then there are “reggae album covers,” and what Hajjaj describes as the “Arabised” versions of Hollywood films which crept into North Africa from the 1950s onwards. “If you look at Egyptian culture from the 60s and 70s, it’s a rip off of Hollywood. There’s definitely that influence there.”

The cultural cross-pollination which characterises his work is also partly a product of – and a comment on – the fact that youth culture has become increasingly homogenised in the era of globalisation. “If you see a 19 or 20-year-old kid on the streets in Morocco these days, he’s got a Supreme hat, a Louis Vuitton belt, a Kenzo t-shirt [and] his jeans will be designer,” explains Hajjaj. 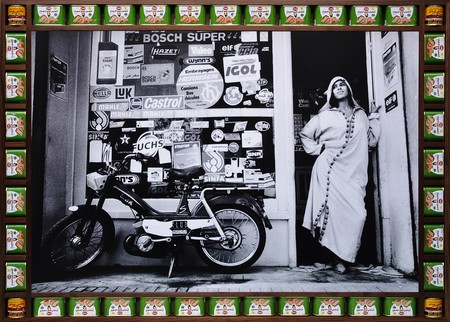 “It’s all counterfeit, it’s all made in China – so the Louis Vuitton belt you’re gonna get in Marrakech is one you could buy in Portobello Road or Brick Lane – but I’m coming from that, and that’s what comes into my work.”

There’s also an undeniable element of fantasy to Hajjaj’s work. It’s not just the hallucinogenic colour schemes and lurid patterns, but the slightly implausible scenes he creates. This is perhaps most obvious in his best-known series, ‘Kesh Angels’, in which groups of women wearing hijabs, burnouses and burqas strike gangster poses on scooters. 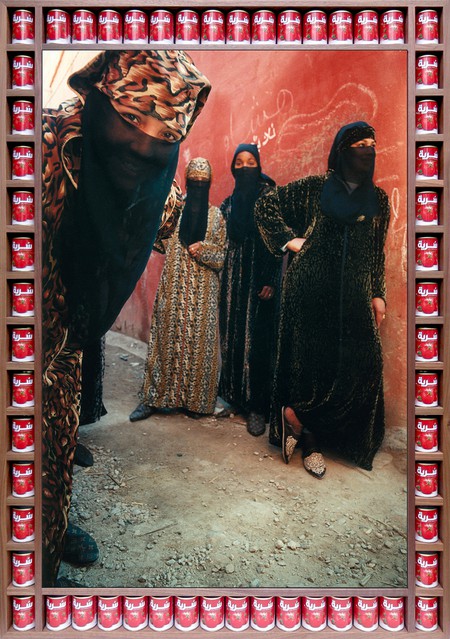 “Everyone in Morocco has a scooter,” Hajjaj explains, “male or female, old, young, traditional or modern. So I was just taking that reality and turning it into these cinematic images. ‘Kesh’ is short for Marrakech, so I’m taking the Hell’s Angels and making it ‘Kesh Angels’. Playing with another brand name – that’s really where the idea came from.”

Once again, it’s taking something you think you recognise, and giving it a playful, colourful twist. And while the scenes may be made-up, they reveal something about everyday life in Marrakech that feels more real than any number of clichéd tourist snaps. After all, this is a city which, like Hassan’s work, defies easy stereotypes. 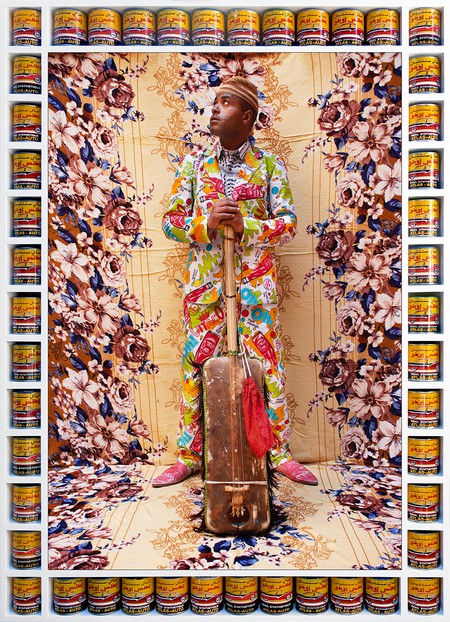 If you want to catch a flavour of the real Marrakech yourself, here are Hassan’s tips for the best places to eat, drink, shop, and hang out.

Where would you go for the best coffee?

I’d go to one of the very local, local places where you see old men and no tourists. The coffee to order is called a nostos, which means ‘half-milk, half-coffee’. One place that does a really good nostos is called Laksur Café Bistro, something like that. It’s near the entrance to the medina.

Where would you go for the best food?

I love street food, so I’d recommend that, but obviously I can’t give you an address. If somebody wants really good Moroccan food, Al-Fassia is great. It’s run entirely by women, and it’s a little bit of a fancy restaurant. Then there’s Dar Moha, and another place I go is called Shtatto. Order a bessara, it’s like a Moroccan soup. 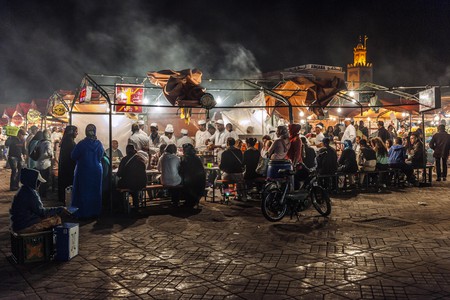 Where’s the best place to go for a drink?

There’s the Comptoir, that’s quite classic, and then there’s the Cabana, that’s a new one that a friend has just opened up. Marrakech is not a big drinking city though, because it’s a Muslim country, but I’d try those two.

For the best art, go to Comptoir des Mines Gallerie. It’s a building with about 18 apartments and the guy shows contemporary Moroccan artists. Then you’ve got 127 Gallery, a photography gallery, then David Block, he does more street art, and then the last one is Riad Yima – I’ve had my work there.

Where are the best places to go shopping?

Where the Shtatto restaurant is, there are a few designers there – three boutiques downstairs. Then you’ve got Trente-Trois, or 33, you’ve got Riad el-Fenn, and you’ve got Beldi, and that’s in the medina.

And finally, where would you go to experience something you can’t find anywhere else in the world?

I would try to befriend locals, and get invited back to their houses. That way you’ll see the real Morocco. Try not to compare where you’re coming from with Morocco – just go with the flow. Let everything happen. 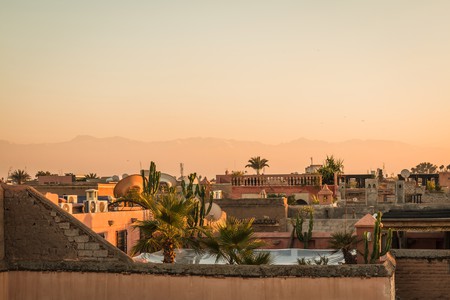 According to acclaimed photographer Hassan Hajjaj, the ‘real’ Marrakech can be found in people’s homes | © Jason Arbour / EyeEm / Getty Images

Hassan Hajjaj will be talking at the Beat Hotel Festival in Marrakech, from 19 – 22 March. An exhibition of his work, Mi Casa Su Casa, is currently running at the Comptoir des Mines Gallerie in Marrakech.