The Best Hotels to Book in Washington DC 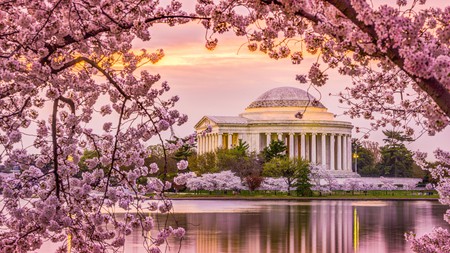 Washington hotels are as full of history as the city itself. The Omni Shoreham hosted the Beatles during their first US tour and the Watergate was where the Nixon scandal played out. But history aside, many of these hotels come equipped with timeless facilities for the perfect getaway – pools, personal chauffeurs, and immaculate design are just some of the things you can expect. Here’s our pick of the best hotels in Washington DC, bookable on Culture Trip.

Four Seasons Hotel Washington DC, for a classy stay in a fabulous location 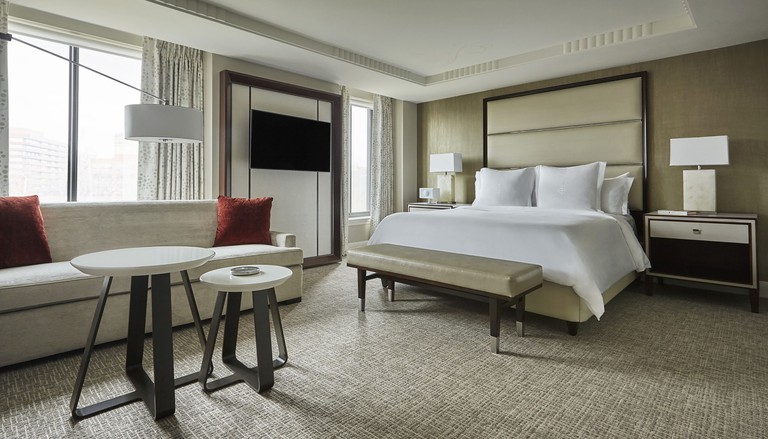 Sitting at the crossroads of DC’s social and political hubs, the Four Seasons is one of the most conveniently located hotels in Washington. It sits at the entrance of Georgetown, mere steps from the city’s famed institutions and iconic historic monuments, making sightseeing a doddle. Start your day at Seasons, known for serving up power breakfasts for movers and shakers, and as night falls, head to Bourbon Steak for classic dishes with a modern twist. 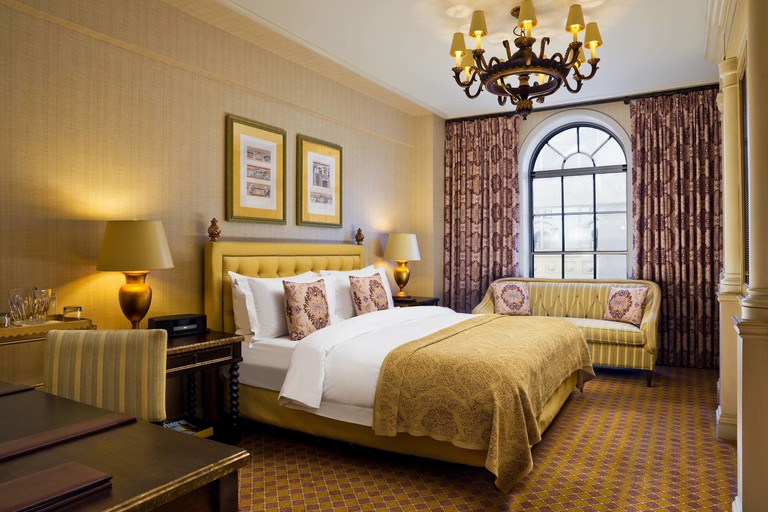 The luxury lodgings of choice for world leaders, dignitaries, royalty, and Hollywood icons for nearly a century, St. Regis is the grande dame of DC. Ideally situated in the city’s popular downtown district, you have the POTUS as your neighbour (The White House is just steps away) and are also close to the monuments and museums of the National Mall. The hotel’s interior is sheer old-school elegance, especially the magnificent lobby with its ornate Florentine gold ceilings and two-tiered crystal chandeliers. 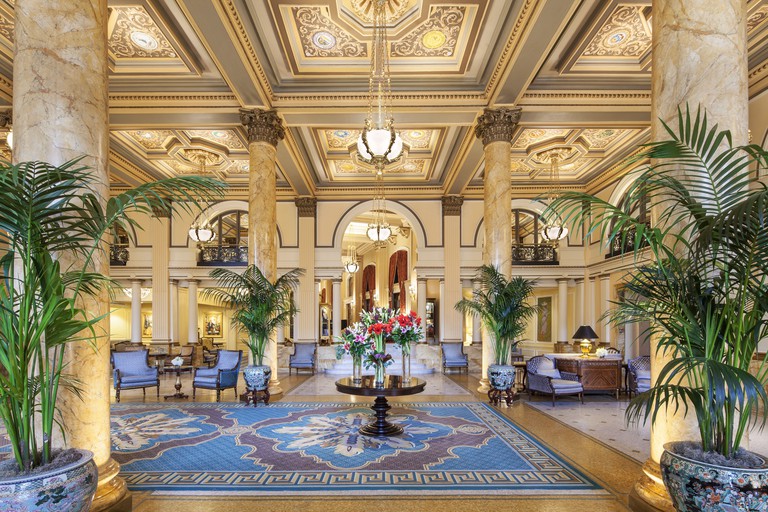 One of the most celebrated luxury hotels in Washington DC, The Willard has earned its reputation as the “residence of presidents”. Since 1818 it has welcomed several presidents, foreign dignitaries, and celebrities through its doors and has been the site of many historical moments. As expected, the service here is fit for a king while no stay is complete without a visit to the iconic Round Robin Bar for a masterfully crafted cocktail. 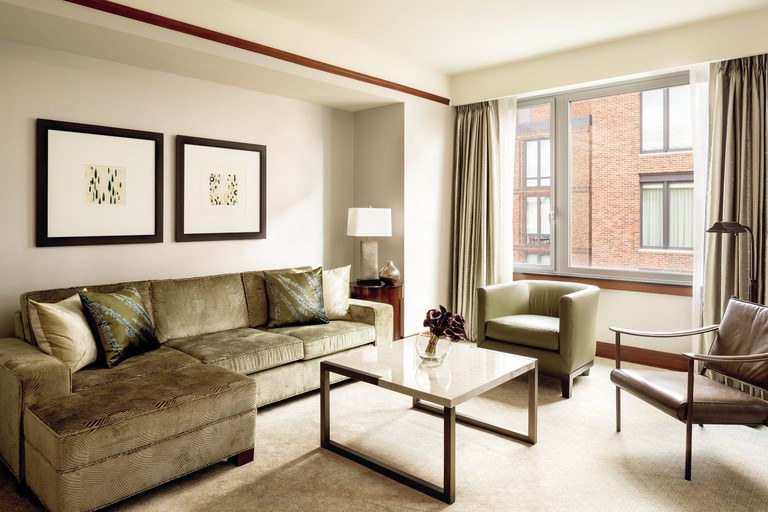 No hotel captures DC’s split personality quite like the Ritz Carlton. While the elegant design reflects the neoclassical architecture favored by the Founding Fathers, the luxury amenities cater to DC’s cosmopolitan community. The best place to appreciate this blend of styles is the Quadrant lounge where Modernist and classical design sit comfortably next to one other. Even the drinks menu is a trip down memory lane and features tipples beloved by past presidents. 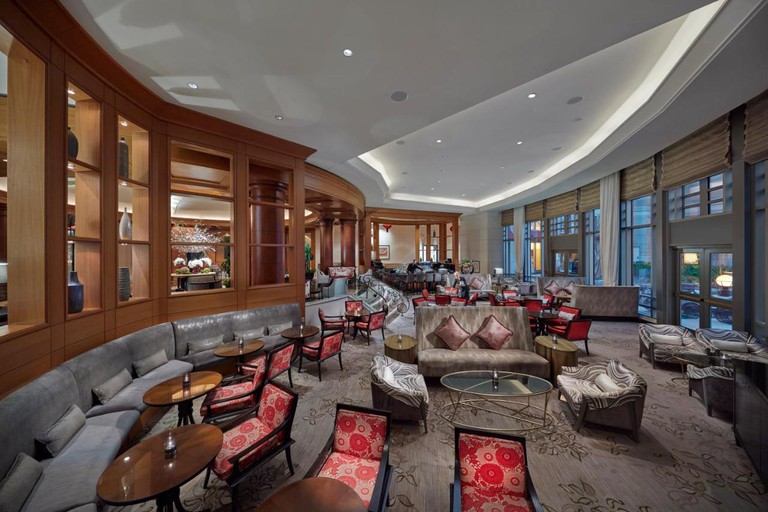 The Mandarin Oriental has a prized location, whether you’re a foodie or history buff. Situated along the Capital’s revitalized Southwest Waterfront, the hotel is a short walk from DC’s most cherished monuments and is also close to a number of exciting restaurants in the new District Wharf neighbourhood. Back at the hotel, you’ll find deluxe bedrooms with a spacious layout and spa-inspired bathrooms that come with deep soaking baths. 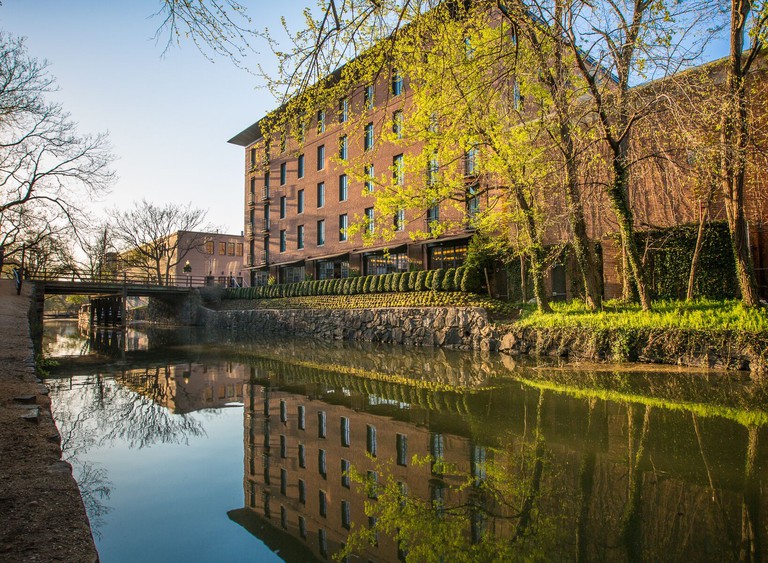 With its location along the Chesapeake and Ohio Canal, this stylish DC hotel is near shops and eateries and a four-minute walk from Georgetown Waterfront Park on the Potomac River. Here you’ll find polished rooms that have sleek bathrooms with rainfall showers. Meanwhile, the upgraded rooms have freestanding tubs, living rooms, fireplaces, and dining rooms. Chances are you’ll head straight for the rooftop terrace which has a bar, a lounge, and an infinity pool with city views. 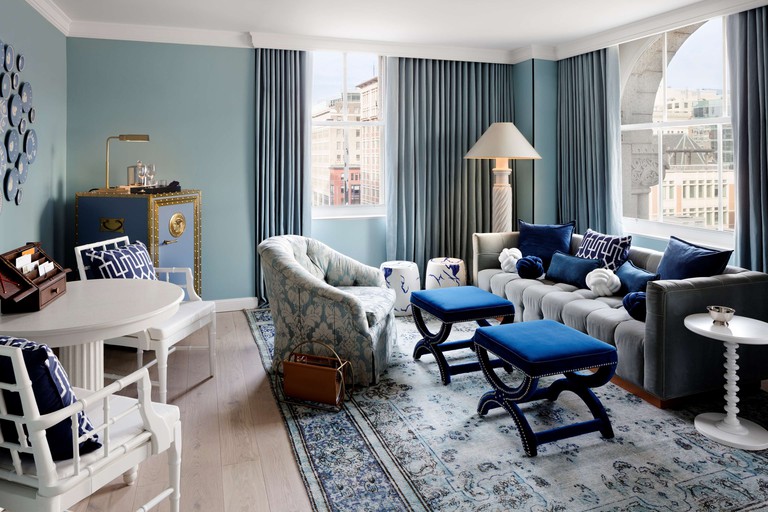 As the name suggests Riggs is located in the former Riggs National Bank building on the corner of 9th and F Street – a history the hotel wholeheartedly embraces. To pay homage to the building’s legacy, each of the 181 guest rooms and suites is reminiscent of a private safety deposit box, while small details throughout the Riggs are inspired by the golden age of banking.

Watergate Hotel, for a political landmark 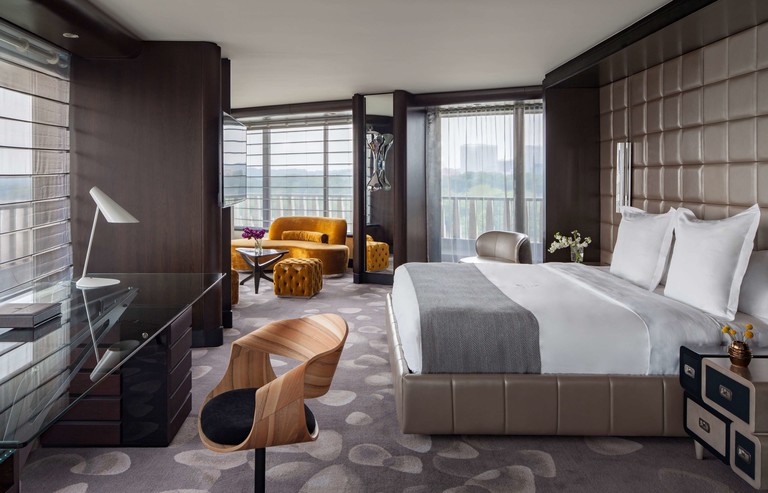 Courtesy of Watergate Hotel / Expedia.com
Yes, the famed hotel that was the site of the Nixon Watergate scandal is still in operation, so you can book yourself a piece of history here. But the Watergate complex was controversial long before 1972, as the avant-garde, daring design upset the refined conservative tastes of DC (boy, has the city’s demographic changed). The sleek, modern interior is primarily monochrome with silver accents, and overwhelmingly sleek – fit for the many Supreme Court Justices who have lived in these apartments. 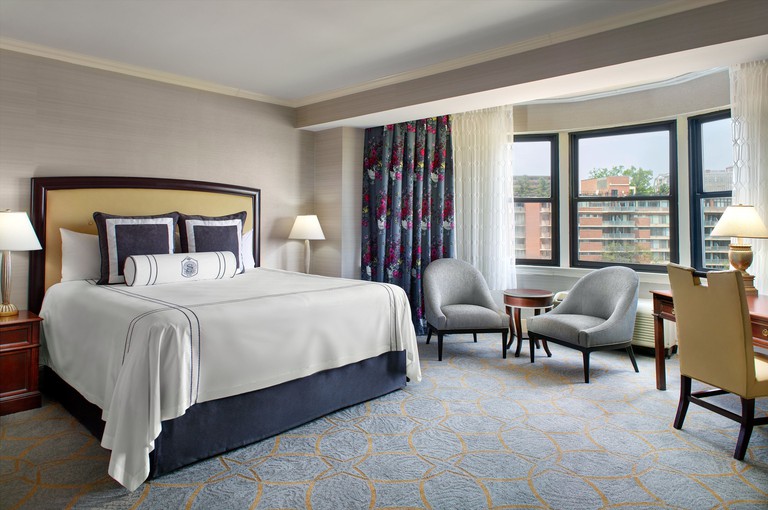 Courtesy of Omni Shoreham Hotel / Expedia.com
Sitting on a spacious green property near the National Zoo, and on a side street away from the busy Connecticut Avenue, the Omni Shoreham Hotel is big, busy, and bustling, with a range of rooms that are often fully booked. The interior is reminiscent of a classic 1930s grand hotel, and while it may be in need of a little updating, it has a charming character. The hotel opened in 1932 and the Beatles stayed here during their first US tour.

The Jefferson, for personalized service 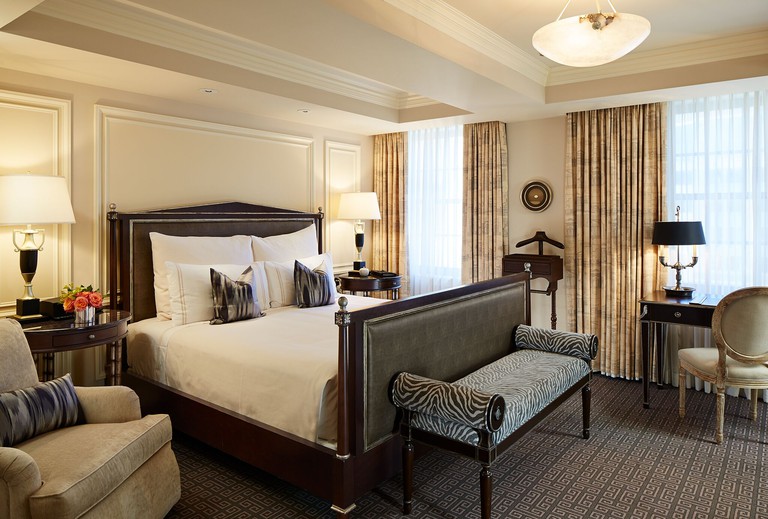 Courtesy of the Jefferson Hotel / Expedia.com
This formal hotel exudes importance, as only a hotel named after a founding father can. A stay at the Jefferson comes with lavish complimentary amenities such as bath salts, a personal chauffeur, and distilled water in crystal decanters. The price is high, but you get what you pay for – lavish rooms and attentive service that pays attention to every detail.

This is an updated version of an article originally by Kate McMahon.