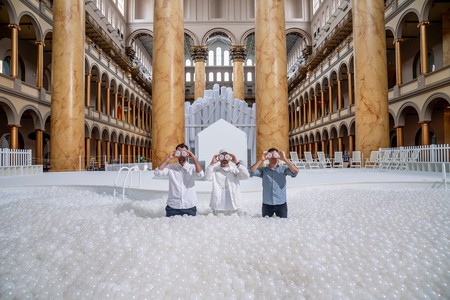 More than 1,500 visitors attended last week’s opening of Snarkitecture’s Fun House at the National Building Museum in Washington DC. If you’re planning a visit, here’s what to expect inside the immersive, experiential all-white house of design.

As part of the National Building Museum’s Summer Block Party series, New York-based architecture firm Snarkitecture designed a temporary structure to be outfitted inside the museum’s historic Great Hall. Fun House, which will be on view until September 3, reimagines the traditional home with a series of interactive rooms featuring the firm’s previously designed, experimental objects and installations, including Light Cavern (Milan, 2015) and Drift (Design Miami, 2012). 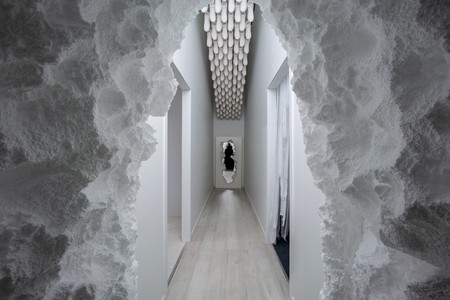 Light Cavern, a translucent, cavernous installation that features 30,000 individual strips of suspended white fabric, was initially unveiled at Salone del Mobile in 2015; the installation is now displayed in one of Fun House’s bedrooms. Excavated Mirror (2010), a topographical landscape set within a wall and containing a mirrored surface, can be found in the house’s bathroom. Other experimental design objects, like Cutaway Cabinet (2014), Felt Light (2013), and Eames Chair (2014), are positioned in the kitchen area, as well as every other interior space. 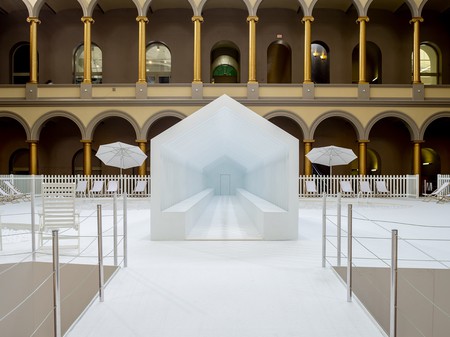 “Besides its symbolic value, the house stands for the basic icon in the field of architecture,” said the curator for the exhibit, Maria Cristina Didero, in a release. “A simple and evocative concept, a house is the first thing most children learn to draw spontaneously, adding a triangle to a rectangular shape. In the occasion of Fun House, starting from the aforementioned simple outline, the conventional household is regarded and totally reimagined to contextualize the unconventional theoretical journey of Snarkitecture’s first decade of activities.” 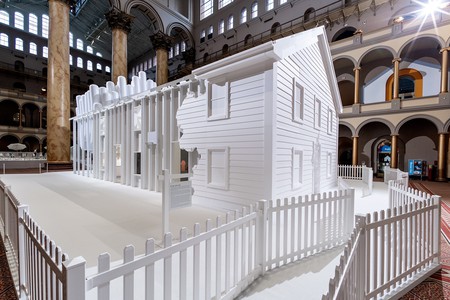 Founded by Daniel Arsham and Alex Mustonen (Benjamin Porto joined four years ago), the firm has developed an impressive portfolio since it first began in 2008, most notably designing the interiors for the trendy clothing store Kith. 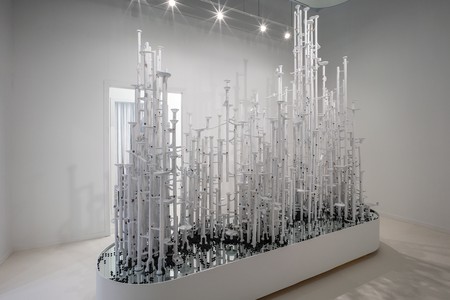 This isn’t the National Building Museum’s first collaboration with Snarkitecture. In 2015, the architecture firm created a 10,000-square-foot ‘pool’ in the Great Hall, which contained close to one million recyclable translucent balls. The project, entitled Beach, brought 180,000 visitors to the museum over the course of two months. 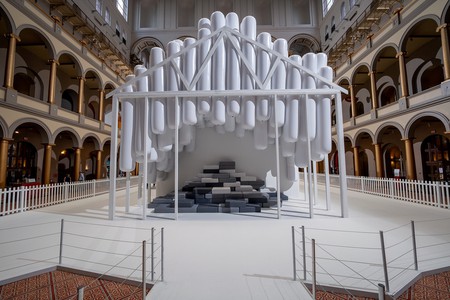 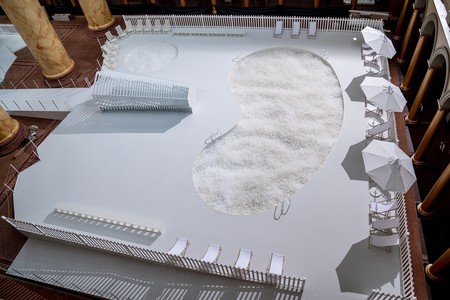 From now until September 3, the museum will hold a series of pop-up talks, behind-the-scene tours, a Spotlight on Design lecture series, and late-night events on Wednesday nights. It’s worth a trip to see the four massive Corinthian columns in the Great Hall alone, which are reportedly the tallest classical columns in the world.

Tickets are $16 for adults and include one hour of exploration in Fun House.