An Introduction To The Washington Color School 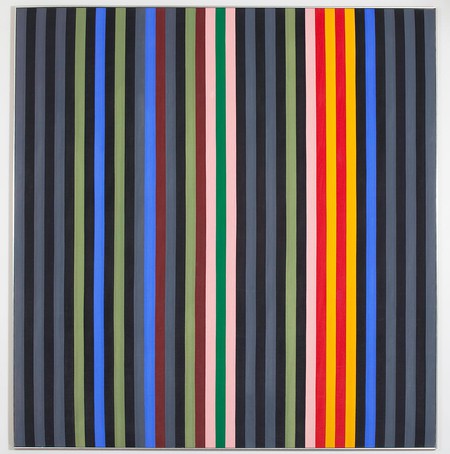 The Washington Color School, a DC-based artistic movement in the 60’s, challenged the connotations of art. Its goals, and the strictness of its terms, still remain ambiguous and a subject of fierce debate. But the artistic movement was defined and shaped by six artists, who sought to reject the artist’s projection of emotion within the painting. They wanted to return art to its purest form, with a focus on light and form, and color field painting was their answer.

New York in the 1950s was dominated by experimental artists, and they were in constant competition with each other. Competition leads to influence, however subtle. When art critic Clement Greenberg traveled from New York to DC, he was struck by the “uncorrupted genius” of it all. “You can keep in steady contact with the New York art scene, without being subjected to its pressures to conform,” he said.

The city of Washington offered artists a blank canvas though, making it somewhat ironic that color school painters were defined by leaving much of the canvas raw, untouched, and blank. Not that DC didn’t have a unique art scene, but it wasn’t a collective – the artists were independent of one another. The ensuing Washington Color School was no different. 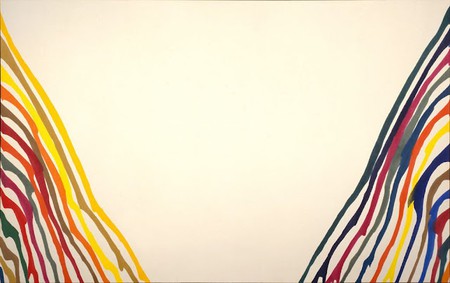 The six chief artists, Gene Davis, Thomas Downing, Morris Louis, Howard Mehring, Kenneth Noland and Paul Reed, were characterized by their lone wolf tendencies. School was a vague term they never eagerly embraced; the “color school” was more a loosely connected artistic movement. There’s no proof all six men were ever in the same room. The name only materialized after their works were hung in a now-defunct Dupont Circle art gallery curated by Gerald Noland; he called them “the Washington Color Painters,” and the exhibit traveled cross-country, where the name became popularized.

The artists shared two prominent aspects: their tendency to soak cotton canvases in acrylic paint to produce a stained effect, as opposed to painting on the canvas’s surface, and depicting the color splotches in strictly defined geometric patterns. They were obsessed with color, and experimentations with it on the canvas.

Color field painting is marked by large planes of one dimensional color, often in rigid and geometric shapes. The resulting effect is flat planes of uninterrupted color that stretch across the canvas. Like other abstractionists, instead of depicting an image, color field artists sought to make the canvas act as the image itself.

The involved artists had experimented with the abstract expressionism movement of the 1950s, marked by the penultimate avant-garde icons of Jackson Pollock and Andy Warhol, but the color field painters collectively found expressionism overly impassioned and too complex. They wanted to remove the unnecessary additives and create art in its most original form.

Gene Davis, a DC native, is perhaps the best-known artist of the color school. The Smithsonian American Art Museum recently opened an exhibit dedicated to him. Davis sought to blur the boundary between painting and sculpture, making the former into living exhibits. His famed Franklin’s Footpath (1972) stretched 414 feet before the Philadelphia Museum of Art. 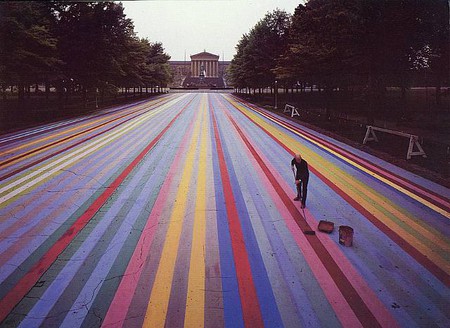 There was also Paul Reed, who exhausted experimentation with color on canvas enough to seek new surfaces. He was concerned with the relationship between a painting and the wall it hangs from: simplistic, yet profound. 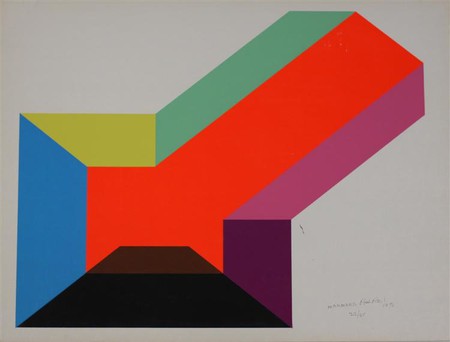 In 2007, a concerted effort between museums and galleries revived locals’ interest in color field painting. Art curators then launched the Washington Color School Project, to research and gather paintings from the movement’s prominent figures, in order to establish a cohesive collection and solidify their place in history. While loosely connected, with different intentions, the movement was historical – and DC provided the perfect canvas. Critics speculate that DC’s odd traffic pattern, marked by circles and oddly aligned grids, inspired the shapes that would become legend.