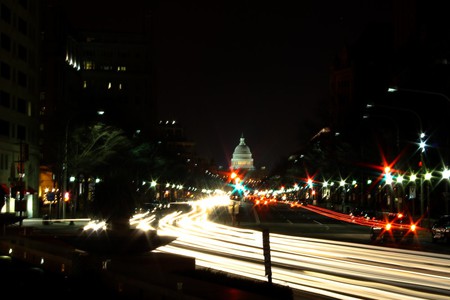 Prepare to sit when driving in the District, it's been listed a one of the worst U.S. cities for traffic for years | © crizzirc / Flickr

If you’ve ever driven through Washington, D.C. you know traffic is a nightmare. In fact, last year, drivers in D.C. spent an average of 63 hours in traffic. While we can’t make it go away, here are 13 weird facts about the street system to share with your Uber driver while waiting for a motorcade to go by.

There is no J Street

There are many rumors and legends about why there is no J street. The most famous being the infamous grudge D.C. designer Pierre L’Enfant had against Chief Justice John Jay. However, the more accepted reason is how similar the letter I and J look when printed, so J was eliminated to cut down on confusion. George Washington University has a J Street Cafe (located on 21st Street), making it a favorite upperclassman prank to ask freshman to meet them at J Street.

The traffic circles are to help orient you 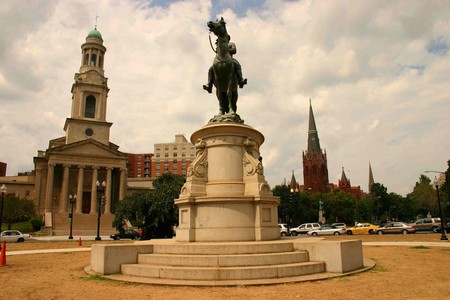 Another D.C. myth is that the plethora of traffic circles around the area was to prevent cavalry attacks. But in L’Enfant’s grand scheme, he saw these confusing, congested circles as ways to orient your direction (not quite what happened). The circles take place when an avenue crosses the traditional grid system, and he originally thought they should be settled by a particular state and serve as an informal embassy and community square. This also did not happen, though many, such as DuPont Circle, serve as parks.

In L’Enfant’s design of Washington, D.C., the city’s grid system was much smaller—measuring only nine miles—and ended at W street. His plan stretched from Georgetown to what is now Florida Avenue, which he labeled “Boundary Street.” Even after the city expanded and strayed from his plan, Y and Z were never added.

Once the city planners hit Boundary Street and needed more city room, they began naming streets alphabetically with double-syllable words. However, they skip D in this iteration, along with J, Y, Z. Again, there was more D.C. than street names, so the naming continues with triple-syllable words, continuing north. Shockingly, they did find a three syllable Q name: Quackenbos Street.

You know you’re nearing Maryland by the flowers and trees

If you’ve passed the double and triple syllables, you’re nearing Maryland. Street names were then designated alphabetically by flowers and trees. This far north, the city no longer operates on a grid system, so turn on your GPS.

In keeping with L’Enfant’s vision of state embassies at circles, he decided each avenue bisecting the grid should be labeled a state name. When he was designing this grand vision, there were only 13 states. Things went awry in the expansion and it went from a simple grid system with letters, numbers, and states to throwing in different avenue names like Potomac Avenue. There is also an Ohio Drive and California Street to make it a little more confusing.

Potomac Avenue isn’t near the Potomac

Why should things make sense? You’ll notice Potomac Avenue runs parallel to the Anacostia River instead of its namesake. This is because prior to 1909, Potomac Avenue was actually Georgia Avenue, following the vision of L’Enfant to have avenues be named after states. However, Senator Augustus Octavius Bacon of Georgia noticed the road was dilapidated and considered it an affront to the Peach State. He petitioned what was Brightwood Avenue at the time to become Georgia Avenue, and what was Georgia Avenue to become Navy Yard Avenue. This was proposed for three years before being passed, changing Georgia to Potomac and Brightwood to Georgia. Apparently, there was nothing more important for Congress to do.

You can visit all 50 states in an annual bike ride

Once a year, the Washington Area Bike Association pedals all 50 state-named roadways. Because of how planners got willy-nilly with the street naming, this ride spans 62 miles and all eight wards of D.C. If that sounds too long to you, there is also a 13 Colonies Ride that takes place in a much more succinct 15 miles.

The design was inspired by France

With a name like Pierre L’Enfant, it has to be French. Much of D.C. was planned with Versailles in mind, a tribute to where he grew up. He created focal points at the Capitol and White House. Both seats of government power were put on hills, to look over the city. The crossing avenues are also similar to the pathways crisscrossing the extensive gardens of Versailles.

The street system was almost planned by Jefferson

Forefather and third president Thomas Jefferson also submitted plans for the design of Washington, D.C. His plan was much more simple and called for a “modest federal town.” L’Enfant submitted a plan so dazzling that he beat out Jefferson easily. You can still see Jefferson’s design skills at the University of Virginia campus, the Virginia State Capitol and Monticello.

The Capitol is the center of D.C. 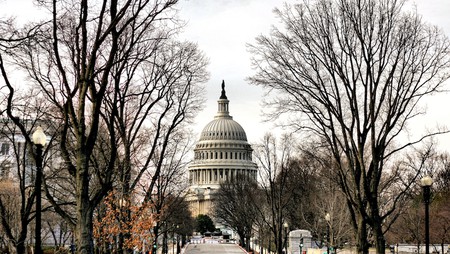 The highest street number is 63

The highest block number is in Northeast. Northwest only goes to 52 and Southeast goes to 58. Southwest, the smallest quadrant, only goes to 23rd street, which ends behind the Lincoln Memorial.

The widest street is Pennsylvania Avenue

Not only famous for housing the White House, Pennsylvania Avenue is the widest street in Washington, D.C. that’s not a freeway. It is eight lanes and two bike lanes wide.