The 10 Most Impressive Buildings in Las Vegas

Las Vegas isn’t known for its nostalgia, particularly when it comes to real estate. In a city where building implosions are a cause for celebration, the architecture and the design of the city are in constant flux. If you want to see some of the buildings that have survived the test of time in Sin City, check out the list below.

If you’re in downtown Las Vegas, be sure to seek out the Historic Fifth Street School. Formerly called Las Vegas Grammar School, the building is a popular locale for weddings and events and remains a beloved site to locals. The Spanish Revival-style structure is also home to the Downtown Design Center for the School of Architecture, and the UNLV fine arts program. Originally built in 1936, it earned its spot on the National Historic Register in 1988. 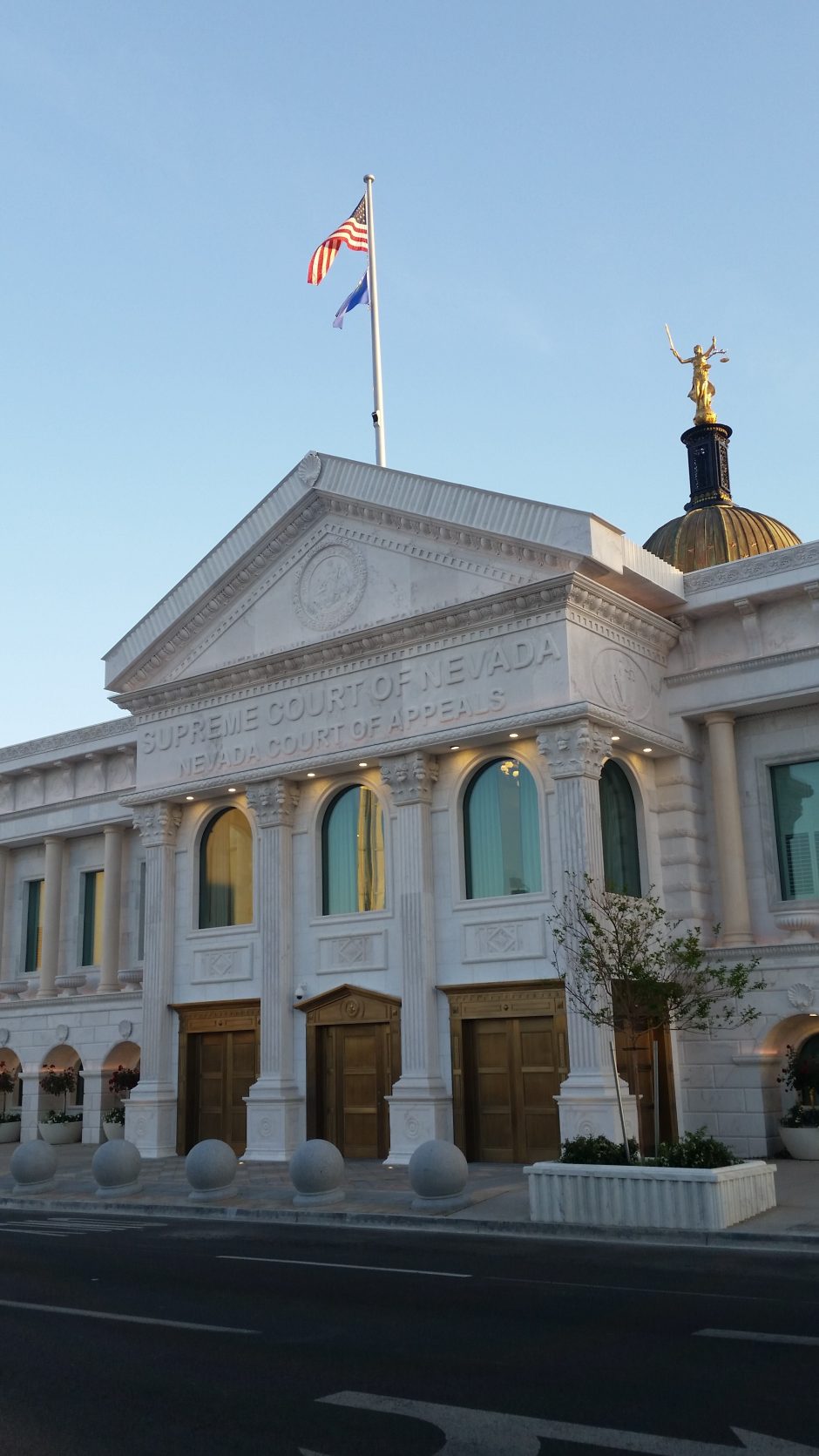 The Nevada Supreme Court building may be brand new, but its aesthetic makes it stand out amidst its surroundings. Opened in March 2017, the marble building is modeled after other courthouses, including the U.S. Supreme Court Building. You can visit the courthouse any time of day, but it looks its best around sunset. The gold dome on top of the structure glistens in the setting sunlight, as do the matching doors. The Roman columns that support the two-story structure lend a different look to the downtown Las Vegas area. 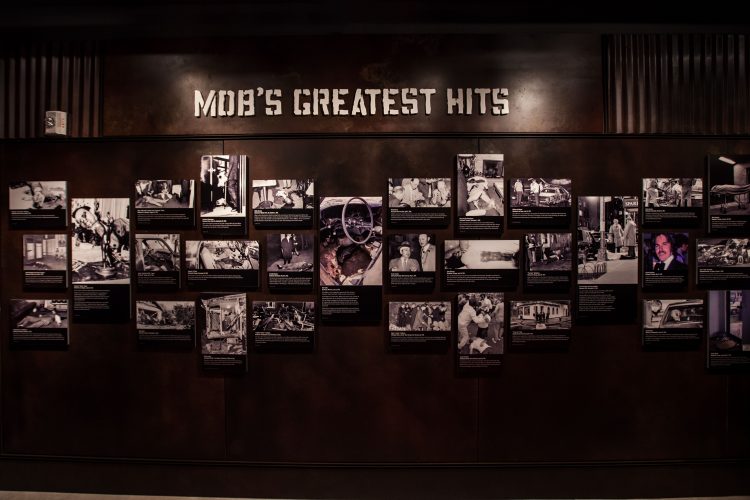 Minutes away from the Historic Fifth Street, you’ll find the infamous Mob Museum. Officially known as the National Museum of Organized Crime and Law Enforcement, this museum is the only one of its kind in the United States. Former mayor Oscar Goodman is credited with the initial idea for The Mob Museum, and despite initial opposition from Washington, the museum opened in 2012. The Mob Museum sits inside the former Las Vegas Post Office and Courthouse, originally constructed in 1933. The neoclassical structure seems out of place amongst the neon-lit casinos and law offices, but this towering edifice remains a popular stop for tourists and locals. 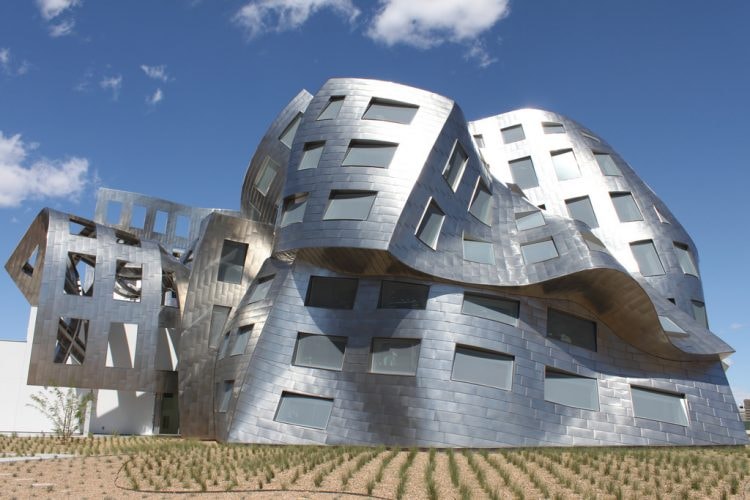 The Lou Ruvo Center is one of the most unique buildings in Las Vegas and is a must-see when you visit the city; indeed, the Deconstructivist building looks like it jumped out of a Salvador Dalí painting. Designed by architect Frank Gehry, the melted, cubic structure cost over 100 million dollars to build and opened in 2010. Local businessmen Lou Ruvo and Billy Baldwin started the project “Keep Memory Alive” and the Center in hopes of furthering Alzheimer’s research, as well as other memory-related diseases.
More Info
Lou Ruvo Center for Brain Health Las Vegas, Nevada, 89101, USA 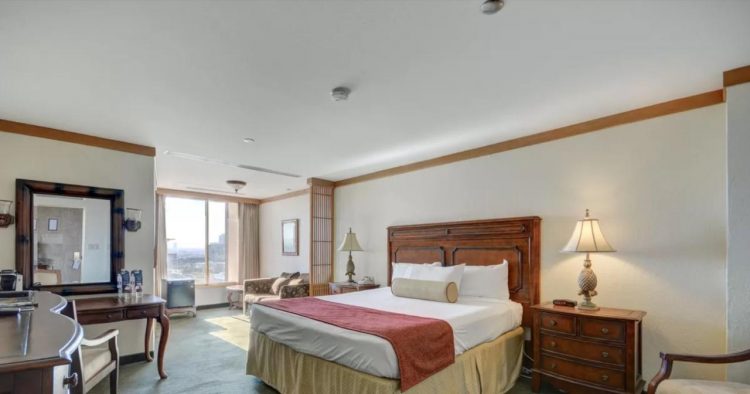 The El Cortez is a classic Las Vegas hotel, opening in 1941 | Courtesy of El Cortez Hotel and Casino / Booking.com

The El Cortez Hotel & Casino has managed to remain a permanent fixture in the ever-changing face of Las Vegas. The Spanish Revival-style casino, which opened in 1941, is the longest-running casino in the city’s history. It is also one of the few attractions in the city that has never changed its exterior or re-branded itself. The El Cortez has enjoyed a rich and colorful past, as the mob once owned the establishment. Bugsy Siegel purchased the property in 1945; he used the profits to fund The Flamingo, the longest-running casino on the Las Vegas Strip. Today, it is one of the few individually owned properties, purchased by Kenny Epstein in 2008. 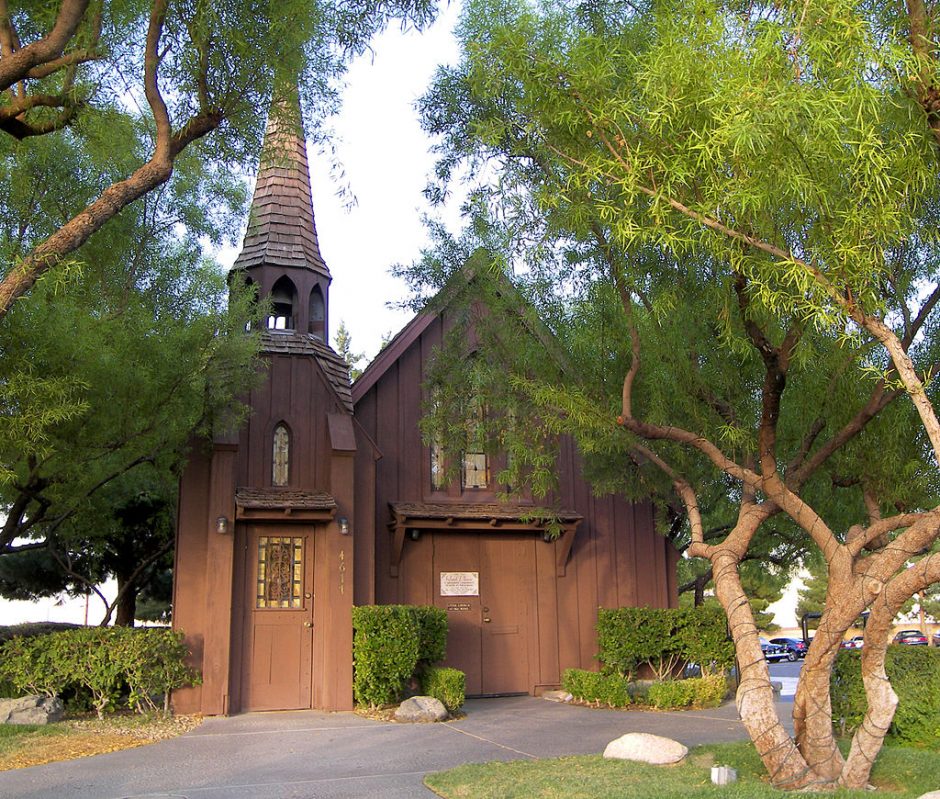 On Las Vegas Boulevard across from Mandalay Bay, you’ll find a chapel that looks like it’s traveled through time. Constructed in 1941, the Little Church of the West is one of the oldest buildings still standing in Las Vegas. The owner of the chapel strives to maintain its integrity; the pews are original to the building, as are some of the light fixtures. The tiny church on the Las Vegas Strip is close to another famous landmark—the “Welcome to Las Vegas” sign. You can walk from one to the other, but keep an eye out for traffic. The Little Church of the West has hosted some famous weddings over the years, including those of Cindy Crawford, Angelina Jolie, and Judy Garland. 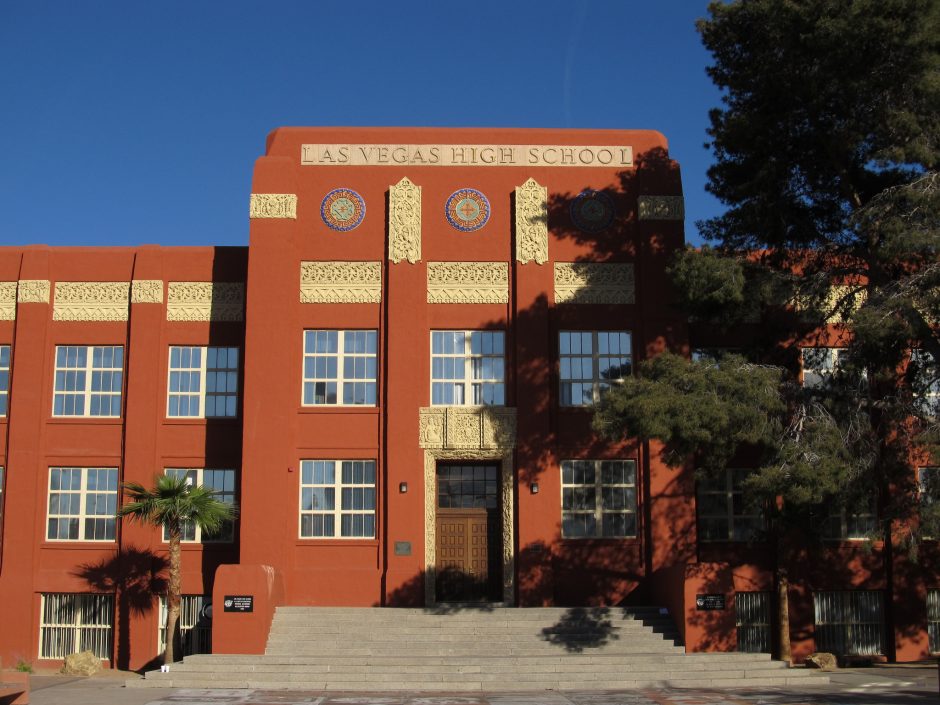 Las Vegas High School, which opened in 1930 and remains close to the heart of its alumni, is one of the few remaining examples of Art Deco in Las Vegas. The high school was the first in the valley, and now, it is home to the performing arts academy. The three-story red building, complete with intricate stucco designs, is a unique sight in the Las Vegas Valley and landed on the National Register of Historic Places in 1986. 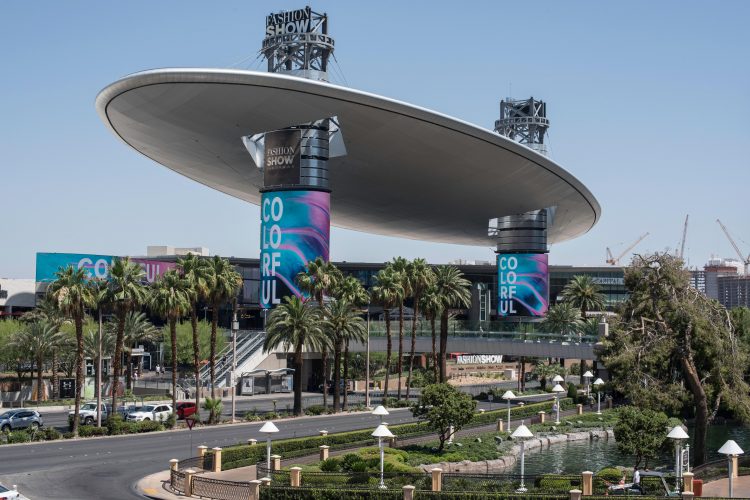 The Fashion Show Mall looks like a mall made for outer space. The signature feature of the shopping complex is called “The Cloud,” a hovering steel and concrete element that provides shade and a projection space for the mall. The Cloud gave the mall a look all its own, making it stand out among the glitter and the bright lights of the Las Vegas Strip. You can spend an entire day at the Fashion Show Mall, and when you’ve had your fill of shopping, you can walk to The Venetian, The Palazzo, The Mirage or T.I. There is no doubt that this building should be a must-see on your next trip to Las Vegas. 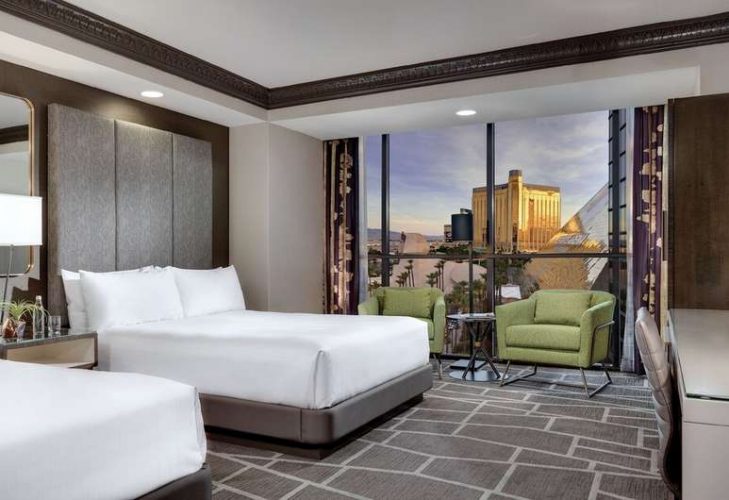 The Luxor is one of the more complicated architectural designs on the Strip. Emulating the pyramids of Egypt, the over 4,000-room property incorporates a variety of architectural styles. The light beam at the top of the pyramid is the strongest in the world, visible up to 300 miles (483 kilometers) away. The replica of the Great Sphinx measures over 100 feet (30 meters) high and is a favorite spot to stop for photos.
More Info
3900 South Las Vegas Boulevard, Las Vegas, Nevada, 89119, USA
+17022624000
Visit website 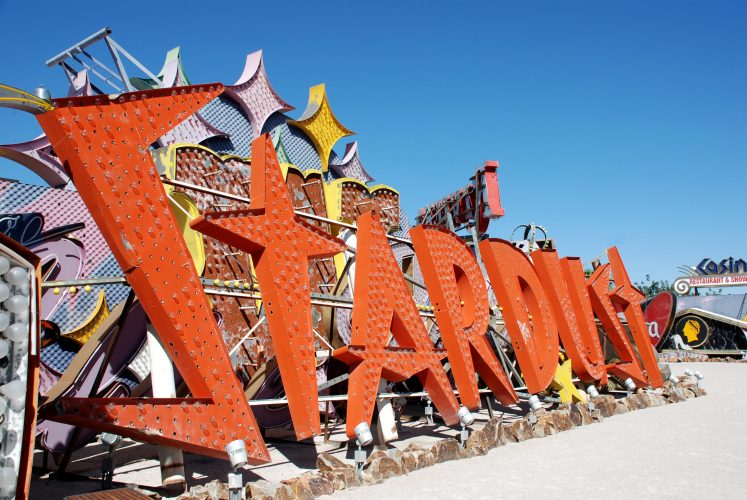