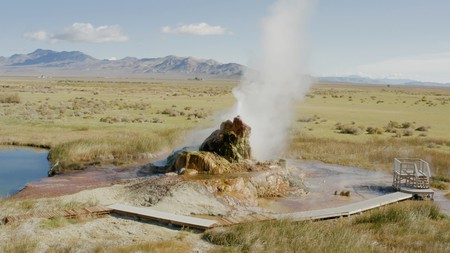 Nevada is a wonderland of natural phenomena, including the Fly Geyser in Gerlach | © Culture Trip
Paid Partnership With

Weird, wonderful, and intriguing: a trip exploring Nevada’s offbeat offerings feels like a voyage to another planet.

Am I really sleeping in a haunted clown-themed hotel next to a cemetery? Have I just been through customs and entered a six-acre (2.4ha) sovereign nation in the suburbs of Dayton? Should I leave a letter addressed to an alien in this postbox? These are just some of the questions you’ll be asking yourself as you set out on a voyage of bizarre exploration around the Silver State’s unorthodox attractions. 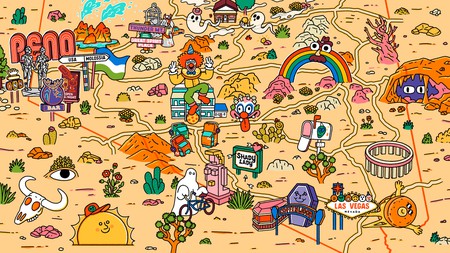 Inspired by, but in no way affiliated to, the druid favorite, Stonehenge, RyanHenge is nonetheless every bit as breathtaking and bewildering – plus there’s far less traffic to contend with. Ryan Williams, CEO of a landfill company, took over a decade to create the attraction – a solar calendar made up of 57 columns of various widths – and it might take you another decade to work out what possessed him to build it. But thank goodness he did, because it’s jaw-dropping. There’s a world map on the ground inside the circle of columns, some yin and yang symbols, a sundial, a chessboard, a labyrinth, and, inexplicably, some vintage trains. 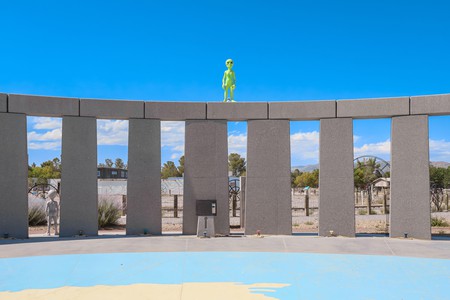 The solar calendar, RyanHenge, in Alamo, is as baffling as it is breathtaking | © Wirestock, Inc. / Alamy Stock Photo

While not strictly otherworldly, the fact that a piece of the Berlin Wall ended up in a Las Vegas bathroom feels parallel-universe levels of weird. Nobody seems to know why or how the 10ft (3m) by 6ft (1.8m) section of the Cold War’s most famous symbols crossed the pond, headed west, and came to a halt in a little-known three-star hotel. But it did and thankfully the patrons are more than happy for people not staying or gambling here to pop in for a look. Ladies, the bad news is that this little piece of history is in the gents. The good news is that security guards are more than happy to check if the coast is clear and escort you into the loo to have a look. 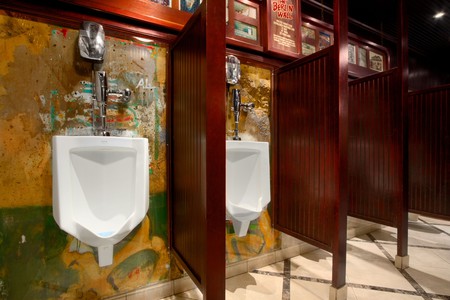 Nevada must have the highest population of ghosts of any state in the US, if the number of ghost towns is anything to go by. Any – and every – Nevada trip should include a visit to one of these old mining towns, which sprung up during the 19th-century gold rush. The trouble with ghost towns, predictably, is that often there’s not a lot for humans who want a drink and a bite. In Midas, though, you need not worry. Once you’ve had your fill of the abandoned doctor’s office, jail, hotels, feeding stables, mines, mills, and cemeteries, there are some very current burgers and beers to be enjoyed at the lovingly restored saloon. 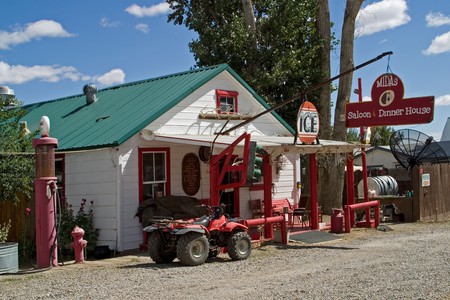 There’s a small part of you, I’m sure, that has dreamt of spending the night in a creepy, clown-themed motel. A dream you hoped and prayed would never come true. If that’s the case, then you’d better ignore the giant neon clown sign advertising the aptly named Clown Motel. Curiosity may well get the better of you, though. Checking in, you’ll be surrounded by what may well be the largest private collection of clown figurines and memorabilia in the States while wearing your complimentary foam clown nose. Your afternoon could be spent browsing the clown-focused gift shop and your evening looking at paintings of famous stars – such as Elton John and Jimi Hendrix – dressed as clowns. Alternatively, the Tonopah Cemetery (not clown-themed) next door is popular with paranormal enthusiasts because it is the haunting ground of some ghost miners who, apparently, have moved into the motel. The haunted clown motel. Have a relaxing stay. 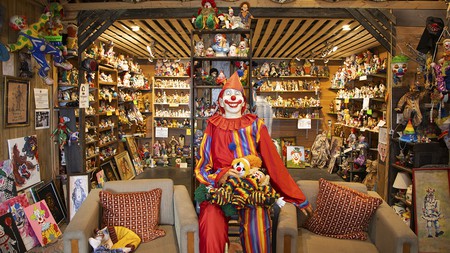 Welcome to the Clown Motel, a creepy landmark next to a haunted cemetery in Tonopah | Courtesy of Sydney Martinez / Travel Nevada

It doesn’t get much more otherworldly than aliens, so where better to start your tour of supernatural Nevada than at a UFO hunter meeting spot near Area 51. Drive down the Extraterrestrial Highway, or in simple terms State Route 375, and between Alamo and Rachel, you’ll find a large black mailbox with the name Steve Medlin on it and a smaller one marked Alien. Alien, predictably, gets a lot more post and attention than rancher Steve. Fanatics have been known to camp near the box for days in the hope of spotting an alien or an unidentified flying object. 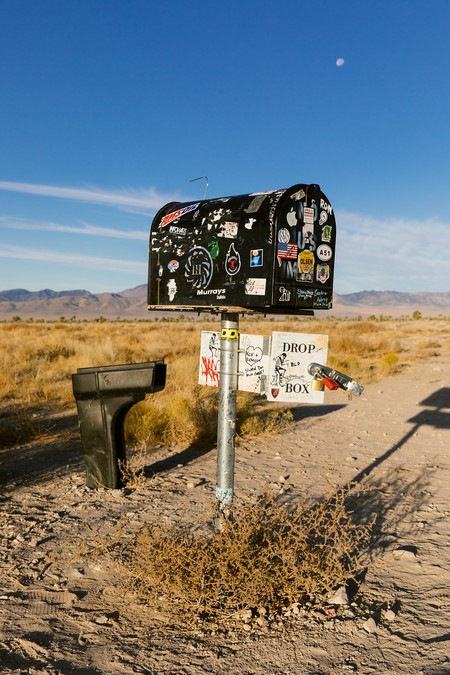 I was worried we’d peaked too soon on the “whoa, weird” scale with the Clown Motel. But have no fear, Nevada’s capacity to offer up the bizarre goes further. In 1977, in the heart of Dayton, President Kevin Baugh and his first lady, Madam Adrienne, turned their 6.3-acre (2.5ha) plot of land into an independent sovereign nation. Legally. This is real. The nation has its own currency, laws, language, bank, national anthem, railroad, post office, and war office. If you wish to visit, you’ll need to make an appointment and go through customs – so make sure you have your passport with you. 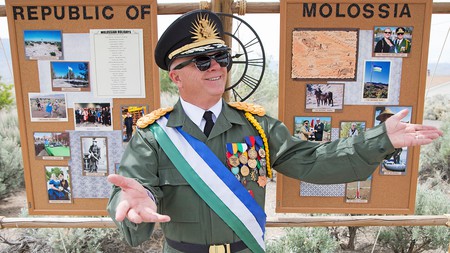 It won’t take you long to explore the Republic of Molossia, a 6.3-acre (2.5ha) independent sovereign nation in Nevada, but be sure to bring your passport | © Sydney Martinez / Travel Nevada

One of the most natural sights to make this supernatural list wouldn’t look out of place in an alien film set on an alien planet light years away. And yet this geyser sits on the edge of the Black Rock Desert, within the Hualapai geothermal flats. In an attempt, 100 years ago, to make this area farmable, drillers hit a well of 200F (93C) water. Not what you want to find as a farmer but luckily for modern-day travelers, over time, a stunning calcium carbonate cone formed. Forty years later another driller drilled and another geyser – known as the Fly Geyser – formed with multiple cone-shaped openings. The combination of mineral deposits and algae gives the geysers their striking green and red coloring. Geography has never been so good-looking. 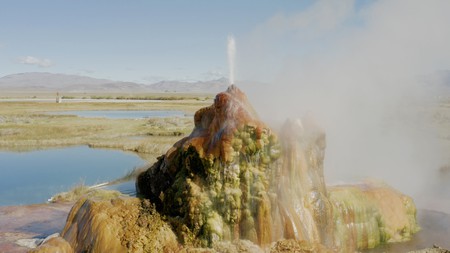 Walking into these caves from the unassuming surround of the mountains of Great Basin National Park is up there with the Tardis and Platform 9¾ in terms of scale. There are no clues above ground that below you lies a cathedral-like colossus of a cave system. The chambers are only accessible with a guide, who will talk you through the astonishing rock structures and geological marvels. There’s also a relic of the pre-protected era of the network – the Inscription Room – where more than a 100 years’ worth of graffiti, very much of this planet, adorns the walls. You won’t be allowed to add to it. 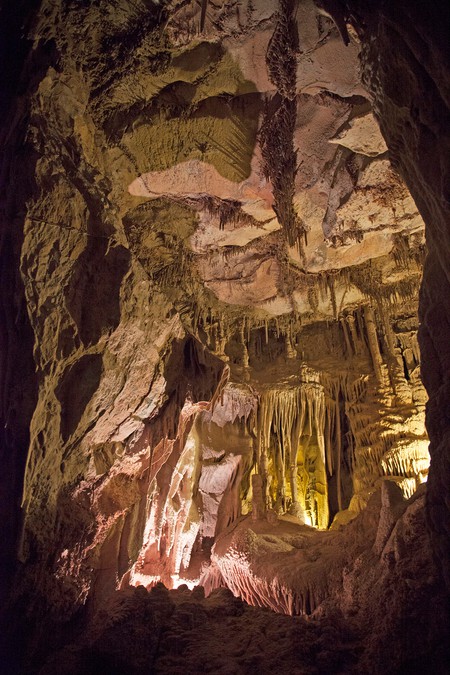 Drive through the empty desert along Nevada Highway 447 and eventually, somewhere between the Smoke Creek and Black Rock deserts of north Nevada, you’ll come across a roadside sign with the name of this extraordinary establishment emblazoned upon it. What you’ve found is a solar-powered pottery studio and gallery built in 1974 on an abandoned homestead. If you decide to stop, and you really should, you’ll find an alien-themed art gallery and some really rather stunning porcelain, stone- and Raku-ware to purchase. 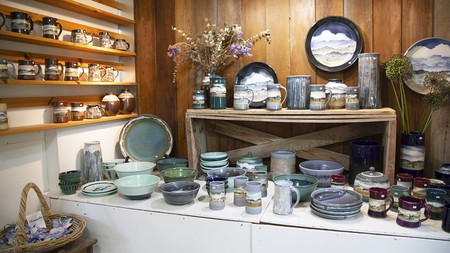 Stop off at Planet X Pottery, a solar-powered studio in Gerlach, for an alien-themed art gallery | Courtesy of Sydney Martinez / Travel Nevada

The weird and wonderful world of Nevada awaits. Start your journey now