A sea of casinos, wedding chapels with Elvis impersonators, and neon in every direction: Welcome to Las Vegas. There’s no in between with Las Vegas, you either love it or loathe it. This city in the Nevada desert isn’t for the faint-hearted; it’s an all-singing, all-dancing 24-hour party with its own neon takes on global icons like Paris’s Eiffel Tower and the Egyptian pyramids.

Las Vegas’s partying ways and fabled gambling scene draw punters from around the globe, with over 40 million people visiting the city of 650,000 annually. Look at the camera roll of any recent Las Vegas visitor and you’ll probably see a similar smattering of sites: with bright lights a mainstay, along with the infamous singing Fountains of Bellagio and Caesars Palace Las Vegas Hotel and Casino.

An art form synonymous with Sin City, you can hedge your bets that you’ll see more neon here than anywhere else in the States. Some of the most ubiquitous being: “Welcome to fabulous Las Vegas”, “Open 24 hours” and “Casino”. But have you ever wondered where these signs go to retire? 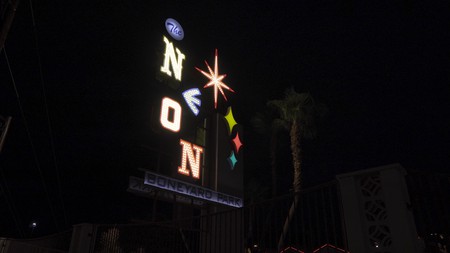 Founded in the late 1990s, Vegas’s own Neon Museum exists as a graveyard to pay respects to fallen neon signs. Dedicated to preserving and collecting the city’s iconic lights, the museum’s collection dates back to the 1930s and comprises restored signs that otherwise would be discarded as hotels are imploded – as they often are in Vegas.

Deliberately designed to feel like a scrapyard, this museum spans two outdoor areas including its North Gallery and Main Collection. The collections feature over 200 unrestored signs – some of which are on all the time and others which are illuminated with ground lighting. The museum plans to expand vertically soon to feature a 30-foot-(9-meter-)high grid full of signs. Elsewhere, its Visitors Center is an example of Mid-Century design, shaped by atomic- and space-age motifs, which was originally constructed in 1961 and saved from demolition in 2005.

There’s one thing that we can guarantee: there’s no place quite like it.