The Best Clubs and Nightlife in Portland, Maine

You’ve just finishing dining, the sea scallops and Brussels sprouts from one of Portland’s great restaurants sitting comfortably in your tummy. But you’re not quite ready to turn in. There’s salt in the air. The cobblestone streets and brick buildings look inviting. But where to go? If you’re ready to party (or at least hear a live act) then we’ve got you covered (though you’ll have to fork over the cover yourself). Ready to mingle? Here are our favorite clubs and nightlife spots in Portland.

This steam-box of a club offers a unique heat valve unlike any other in Portland: a gated courtyard where the young and barely dressed play jumbo-sized board games while listening to live rock acts. Squeezed into the Old Port (the high-heeled long line often stumbling on the cobblestones as it waits to get inside), Oasis‘ DJs keep the music thumping, with the darkened disco lights and flood lamps illuminating the dance floor and nooks of this club, which spreads out over two floors. There’s a small cover for some bands.

Formerly the Asylum, this former rock and punk music venue closed only to open bigger, newer, and louder. If your post-dinner plans center around being serenaded by local indie artists and traveling West Texan alt-country loners or the odd Ja Rule sighting, then the rebranded Aura hasn’t lost any of its intimate feel (or relatively low prices).

And we're back… NEW SHOW :: @jimmyeatworld is coming to AURA on Thursday, May 11th with @beachslang – Tickets on sale Friday – AuraMaine.com

The sign outside Bubba’s promises 80s dancing every night, but makes no mention of who you’ll be cozying up next to. Sure, there are usual suspects: college bros and the collegial bro-ish; the high-heeled and simply high and townies—Maine for ruralites—migrating to the city for a night. But this is Noah’s Ark for those out and awake (though by no means a restriction) past 9 p.m., and draws the old and even geriatric out to see hips (even if they’re replacements) sway and feet tap that dance floor that lights from underneath Maine’s favorite dive.

In January’s issue of @downeastmagazine there is a story about @bubbas_sulky_lounge in Portland that I had the absolute please of photographing. Having been a semi-frequent customer of Bubba’s over the years it was a magical story to have had the chance to work on! Photographing in such a high energy, dark environment was certainly a challenge, but luckily I had the light up dance floor to help guide my way! The writing by Arielle Greenberg does a fabulous job of describing the mood of Bubba’s.

The college party or after party or those wishing they were still in college can usually be found here, drawn by the low lights, disco ball and bumping jams that spill out onto the street. If a big, packed room full of people in Carhartts and Abercrombie is your thing then dance—you’ve surely found your tribe. Thursdays bring free salsa (dancing), while the DJs take over on Friday and Saturday nights.

Amigos gets a bad rap as the way station to the club, where cheap drinks and little else is to be had before a night out. But with a lively music scene, a sizable outdoor patio and those cheap drinks (the margaritas are strong), Amgios offers enough fun by itself—provided you’re up for a rougher crowd eager for a dive, a smoke, and maybe a few words.

Nearly every night of the week the intimate Arts District venue, Blue, hosts Irish trios and solo blues acts, a diverse range of local and national talent that makes it worth a stop even if you’re not sure what’s playing. There’s small tapas plates, good wine, and local beer. 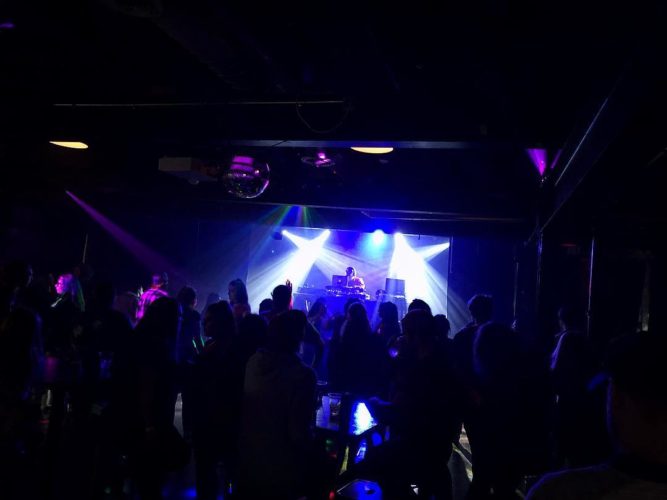 Upstairs a popular Chinese restaurant with the same name, Empire is where you go once the food has settled. The smallish club hosts local and national acts all for a reasonable price, with DJs and comedians completing the offerings. Once a week or so, cover bands duel for supremacy, adding a fun twist to the familiar tunes.

Needed after a long week of grad school #ptschool

Pub severing ample portions of comfort food by day, come night this Old Port icon hosts everything from Celtic rock trios to Phish cover bands. The house band—the Squid Jiggers—play every Wednesday or so at the downstairs bar, where you can enjoy a draft of surprisingly good craft beer or a shot from what’s considered Portland’s largest Scotch selection. On the weekends the top floor plays local acts, watched by a big crowd kept plied with the second floor bar’s offerings.

Don’t be fooled by the looks: Geno’s, Portland’s premier rock and metal club, has character to spare. Come fed (the food not known as a primary or even secondary importance) but ready to drink: the bartender has a shaky hand and the cocktails, if basic, are potent.

This downtown speakeasy makes fun out of finding it (its owners insist on obfuscating its location, a conceit we grudgingly indulge). If you do find it (it’s on Market Street, next to Pat’s Pizza) there’s nothing secret about what keeps locals turning out here in droves: cheap $5 drinks and fun local comedy acts. The basement bar may not have the best wifi, so come for the company and the thrill of finding things the slow way.