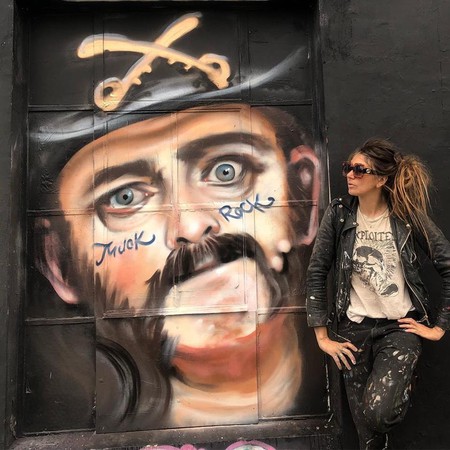 Los Angeles’ Venice neighborhood is an enclave for artists, musicians, and creative culture. With loads of graffiti, colorful murals, and performance artists of all kinds at the helm, Venice thrives on showcasing its local talent most. Of all the painted walls and graffitied corners, the most venerable work comes from muralist Jules Muck—known by locals as the “Queen of Venice Beach.”

Muck’s distinct style is a nod to her mentorship with legendary New York street artist Lady Pink. Muck earned herself trademark status within the Venice community, and her work serves as a local attraction for dedicated art fans and Instagram fans alike.

With every few blocks of Venice “Mucked-up” in street-stopping murals, her work graces everything from walls and storefronts to cars, dumpsters, and even found pieces of garbage. These locally known “Muck-jobs” are easy to spot by their vibrant popping colors and beat-skipping subject matter. She is best known in the community for her sprawling mural titled “Freedumb”—an homage to the drug-induced talents of Jim Morrison, Kurt Cobain, Marilyn Monroe, Sid Vicious, and Janis Joplin. According to Muck, freedom is “dumb.” As a former homeless wanderer and drug addict, she now finds simplicity in just showing up and taking care of business—that is what her freedom is about. In her own words, Jules Muck tells us about art, Venice, and her journey to freedom. 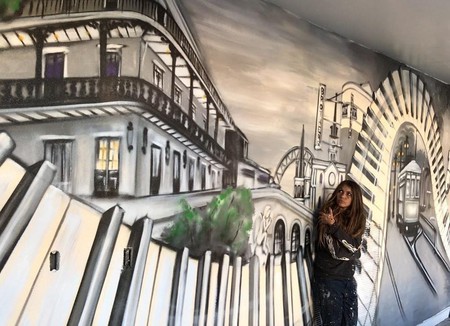 What inspired you to start making art—and when/where did you start?

Boredom and L.S.D. during my teenage years. Well, I started graffiti in Europe and Great Britain when I was a kid. My mother is British, and my father is Greek. We left New York and moved around a lot overseas, so I started writing “Muck” everywhere I went. It helped me feel connected to wherever I was staying at the time. I kept on writing and began spray painting after moving back to New York in the late ’90s. I then started painting with this crew called “B.T.C.,” which stood for “Burn the City,” “Bomb the City,” or “Bronx Thug Connection.” It was hard-core. I was later discovered on a Bronx rooftop by Sandra Fabara (a.k.a. “Lady Pink”) and started an apprenticeship with her lasting the next four years. 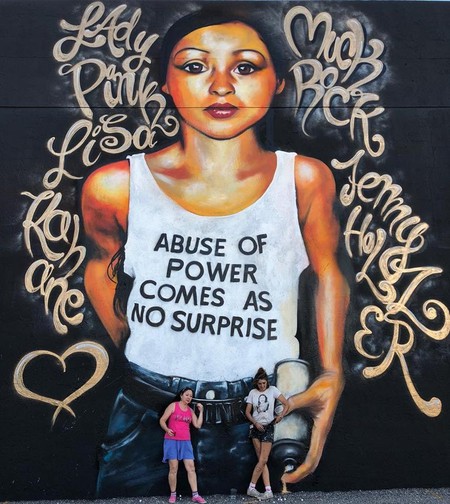 Jules Muck and Lady Pick pose in front of a portrait painted by Jules of Pink. Jules apprenticed under the legendary street artist for four years while in NYC. | © Jules Muck / Courtesy JulesMuck.com

What brought you here to Los Angeles and specifically to Venice Beach?

It was not planned. My car ran out of gas on Electric Avenue in Venice after I got kicked out of a friend’s apartment in Culver City. I had relocated to Los Angeles three days earlier. I just started setting up and painting on the street. I slept in my car and was forced to chat with people while painting. This is how I began selling art in Venice. 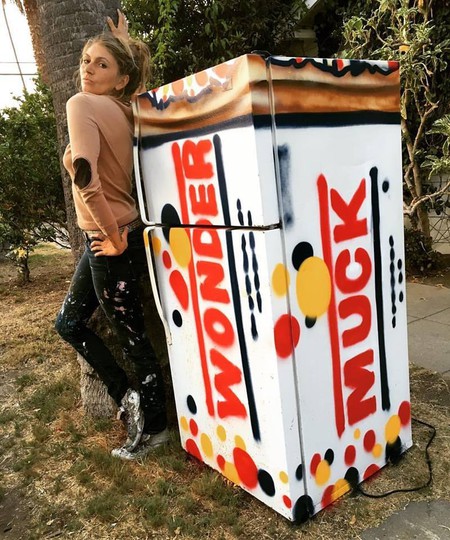 Locals around here let you “Muck-up” their cars, houses, skateboards, and surfboards—but has anyone ever reacted negatively to a surprise Muck-job?

“Yo Venice” [a community website] had significant complaints about me and called a meeting about it when I was promoting my skateboard company “run-a-muck,” but those were mostly tags. The biggest complaint I get now is the paintings I did of “muck-bunnies.” George Francisco from the Venice Neighborhood Council told me they received multiple nasty emails about the bunnies. For some reason, people were offended. 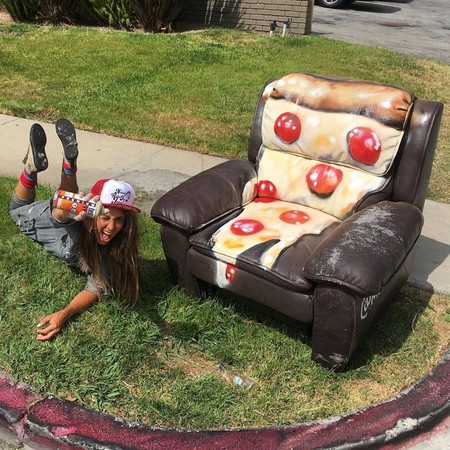 How does it feel to have your work all over Instagram? Do you think social media has had a positive reflection on your art journey?

[Instagram] helps me meet more people. It’s cool. My art has had a positive impact on social media. Instagram gives me a chance to reach out to people who otherwise wouldn’t get an opportunity to see my work. I was totally hesitant at first, but a few friends convinced me it was a smart tool to use in promoting my work. 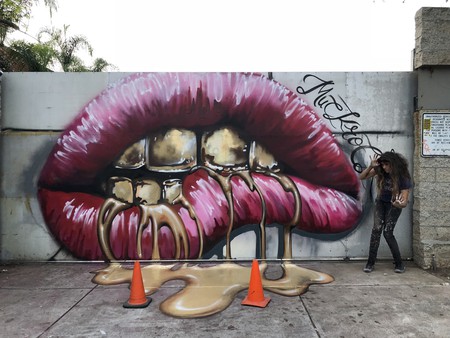 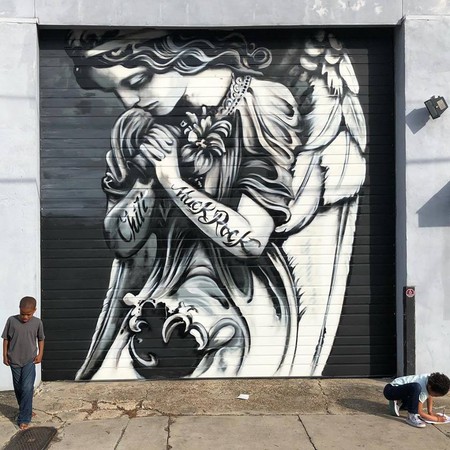 What was your work in Greece like? Why was that so important to you?

I painted in Syrian refugee camps there. They were awesome people, and it was a great experience. The mural I did there was an independent venture with no organization telling me what to paint. I got involved at the last minute on a whim. It was for fun and for free. Later, the mural I painted was featured in National Geographic. I think it’s weird that people are mean to refugees. I loved the people I met. I’m just grateful because art crosses borders not all people can. 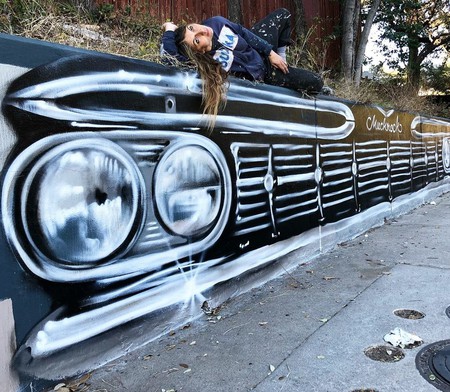 So you tour around the neighborhood—a Muck-Tour as we call it—and tag your art on found objects and corners. How and where do you decide to put your art?

I pack up my car and drive. It is fun, and I have had a chance to work with some interesting people. I enjoy traveling and painting on the road. Sometimes I get permission to paint and sometimes I don’t. My murals are meant to be gifts for the places I travel. I mean, I lose money when I do this. Sometimes other artists act like I’m claiming space, but I’m actually giving back. 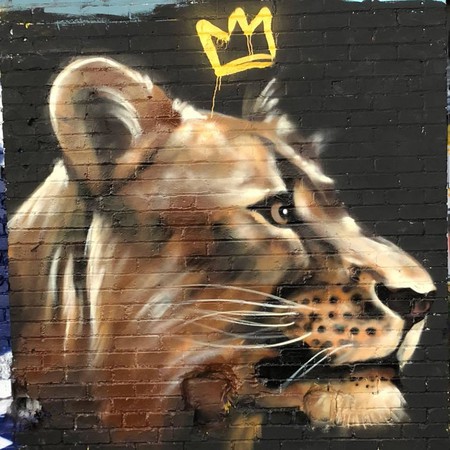 What is next for Jules Muck? Do you have any plans you can tell us about your art?

I have to paint a backyard in Venice today, and I owe someone a jacket piece plus a custom slap. I’m working on some pieces for a show at Bergamot Station in Santa Monica on March 22, 2018, but I might not do the show. 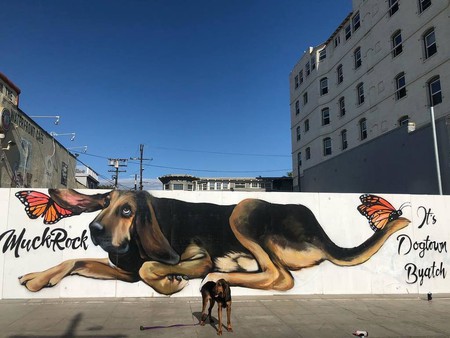 You can follow Jules Muck on Instagram @Muckrock or check out her Muckshop webpage, where she features things like a photo book of her favorite work, Garbage Bombing. For more of Muck, check out the videos below: