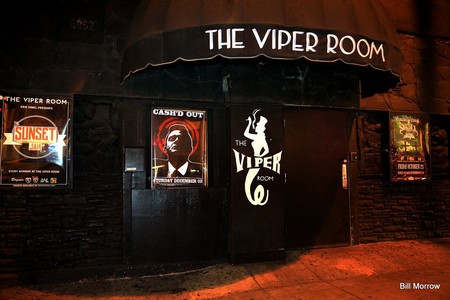 A famous (and sometimes infamous) gathering place for rock and roll musicians, celebrities and whiskey-lovers alike, Los Angeles’ Viper Room has played host to a series of legendary shows. Over the past 25 years, it’s carved a name for itself as one of the city’s iconic musical institutions.

The Sunset Strip’s whiskey-minded rock and roll music venue, The Viper Room, opened by actor Johnny Depp and musician Chuck E. Weiss, has remained a central location for musicians, celebrities and locals since its 1993 inception. It all started 25 years ago when Tom Petty and the Heartbreakers graced the venue’s stage on opening night. A few months later, the night before Halloween in 1993, tragedy struck just outside the venue when 23-year-old actor River Phoenix died from an overdose. Since the 90s, the venue has undergone ownership changes, controversies and seen a resurgence of rock’s most notorious talents carving a space in LA as one of the city’s premiere musical venues.

Since opening night, the dark and gritty rock venue has occupied space on the famed Sunset Strip – the mile-and-a-half stretch of Sunset Boulevard home to other Los Angeles namesakes such as Whisky a Go Go and the Roxy Theatre. But this Sunset Boulevard space didn’t always belong to The Viper Room. Before its present-day iteration, the building that now houses the rock and roll club went through multiple incarnations of musical haunts.

Perhaps most famously, it was once a jazz club called Melody Room – a place frequented by mobsters (Benjamin “Bugsy” Siegel and Mickey Cohen were said to be regular visitors) and celebs. In 1973, Filthy McNasty’s replaced Melody Room and operated as a glam rock hub until the 1980s when the club transitioned into yet another rock venue called The Central. Hard rock reigned over the Sunset Strip in the 1980s, a decade which a reporter at Rolling Stone called “quite possibly the Strip’s greatest decade of decadence”.

Since the 1940s, the club space has breathed music through its walls, attracting a motley crew of people, including everyone from gangsters to celebrities. By 1993, a half century after The Melody Room opened its doors, actor Johnny Depp had vested interest in the club. Along with a couple of other co-owners, Depp re-opened the club under the name The Viper Room.

Although the name was inspired by a type of New Orleans jazz music called “viper music,” the club has primarily featured rock acts since its onset. Throughout the years, The Viper Room hosted a slew of famous rock bands. And by the mid-1990s, bands like the Red Hot Chili Peppers, Stone Temple Pilots, Pearl Jam and Counting Crows had all played sets on The Viper Room’s stage. One of the venue’s most famous acts came in the shape of country legend Johnny Cash, whose performance is now immortalized by a mural on the building’s exterior. 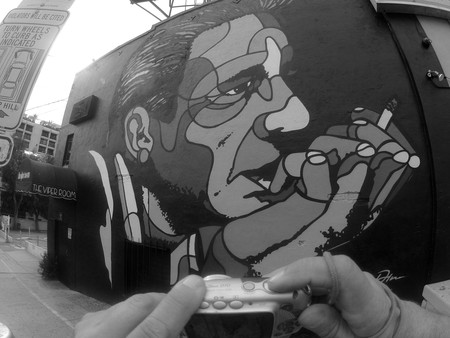 During the 1990s, the nightspot became a haven for celebrities and musicians. Supermodel Kate Moss celebrated her 21st birthday here. Singer Adam Duritz of Counting Crows worked as a bartender (even after his band hit it big). A high-stakes poker game is said to have taken place behind closed doors only to be interrupted by an FBI investigation. Years later, the scene was depicted in the 2017 film Molly’s Game, starring Jessica Chastain. The place established a reputation as one of the city’s legendary rock venues, alluring to many for its glitterati visitors.

In 2001, The Viper Room was met with yet another tragedy when co-founder Anthony Vivien Fox (who was wrapped up in a lawsuit concerning the venue at the time) mysteriously disappeared. A few years later, Depp sold his stake in the club. Despite the change in ownership, the club continues to live up to its rock and roll standards. The Viper Room recently commemorated its 25th anniversary with a private celebration that included a performance from Thomas Nicholas Band. And the venue’s roster of bands still includes every genre of rock music, including groups from around the world that play metal, punk and hard rock on the same stage that once hosted their musical icons.

The Viper Room holds a special place in the hearts of many Angelenos who have been frequenting the club since the 1990s. One of those visitors, supporter Angel Hanson, says there’s no better way to understand the historical significance of the place than to go see a show there first-hand.

“The history itself is amazing of who has played on that stage and luckily I’ve witnessed a few,” Hanson says. “It has a certain type of special to it, sort of like magic.” But no one knows for certain how long the magic will continue.

Today, The Viper Room still cranks out heavy rock and roll musical acts, making it one of the best venues to spotlight new bands. But increasing gentrification and multi-million dollar development deals threaten to change the Sunset Strip as Angelenos know it. Last June, a group called 8850 Sunset purchased the building that houses the famous club for $80 million. In July, a representative for the new buyer told Los Angeles Business Journal that “there’s not a development plan in place.”

After surviving multiple run-ins with controversy, tabloid scandals, and development on the Sunset Strip, the future of the beloved venue is unclear. But one thing is clear: The Viper Room holds a special place in many people’s hearts and losing it would be a major loss to the musical history of LA.

“I always know that if I want to see good live music, Viper Room is the place I can count on for that,” Hanson says.

#Repost: @tommckusick ~ The “Viper Room” with a message…