The Best LGBTQ Bars in Amsterdam 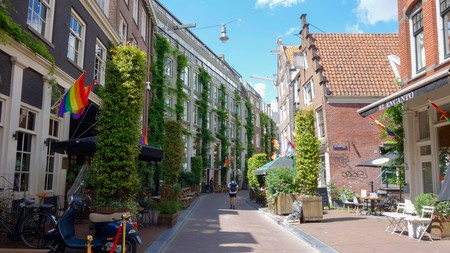 The Dutch capital has long been an accepting city, so you’ll find numerous LGBTQ-friendly bars and clubs there. In the 1970s and 1980s, Reguliersdwarsstraat – close to Rembrandtplein – became a focal point for gay nightlife, and remains so to this day. But other areas such as Amstel, Kerkstraat, and Zeedijk have also grown popular with the LGBTQ community. Here’s our pick of the best LGBTQ bars in Amsterdam. 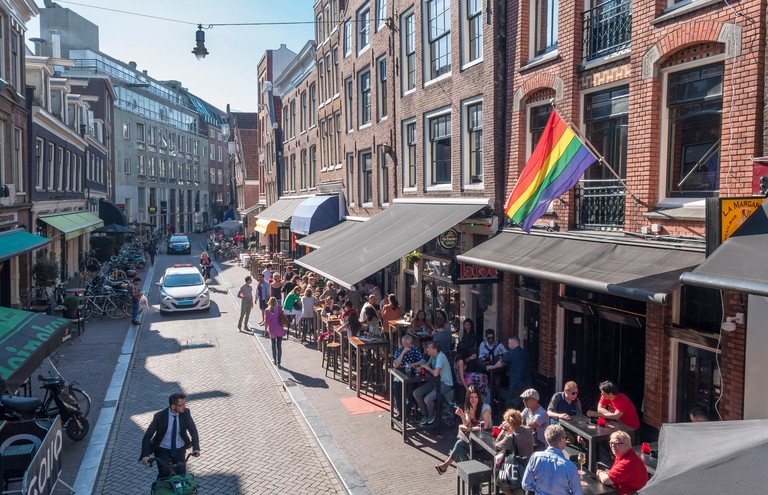 © Wiskerke / Alamy
In the heart of the famed gay stretch, Reguliersdwarsstraat, Taboo has a terrace which is perfect for afternoon people-watching or late-night drinks on warm summer nights. It’s split across two venues – a bar and a canteen. Cheekily dressed bartenders and drag-queen bingo nights create a fun, carefree vibe. The cocktail menu is filled with creations including tequila sunrise, long island ice tea and espresso martini. Don’t miss the daily happy hour from 6pm to 7pm.
Open In Google Maps
45 Reguliersdwarsstraat, Amsterdam-Centrum Amsterdam, Noord-Holland, 1017 BK, The Netherlands
+31207753963
Visit Website
Give us feedback

When in Amsterdam, make time to worship at Club Church, set on a street busy with restaurants and shops south of buzzing Reguliersdwarsstraat. This place offers all kinds of kinky from a leather to feather fetish lounge, weekly naked bar (shoes only; leave your clothes in the cloakroom) and regular spank parties. If you want to strut around in a sexy jockstrap, they’re available to buy at the door. 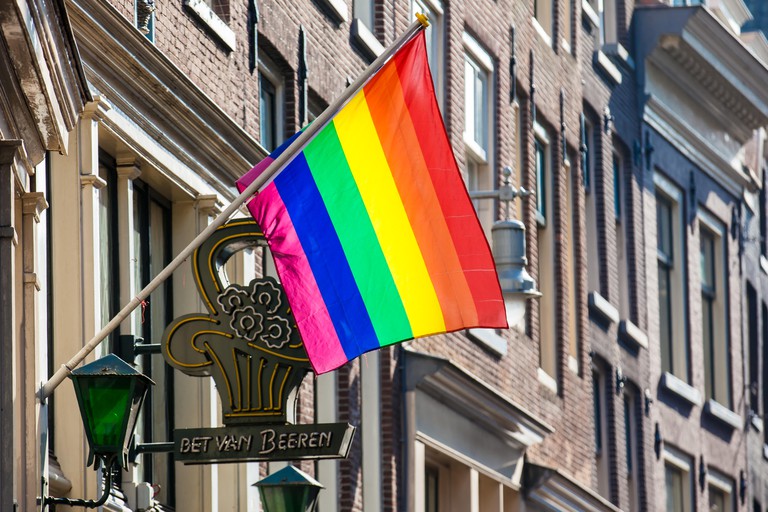 © Anamaria Mejia / Alamy Stock Photo
Amsterdam’s first gay bar was opened in 1927 by Bet Van Beenen. After her death in 1967, it was taken over by her sister Greet who ran it until 1982 when it closed. She decided to resurrect the Amsterdam institution just before her own death in August 2007. Since then, it’s been owned and run by her niece, Diana Van Laar, operating as part style=”font-weight: 400;”>brown cafe, part nostalgia shop, with memorabilia on the walls, a jukebox and billiards table, plus cocktails with names such as Blow Job (Baileys, amaretto and cream). The clientele is a mix of LGBTQ people and straight guests.
Open In Google Maps
63 Zeedijk, Amsterdam-Centrum Amsterdam, Noord-Holland, 1012 AS, The Netherlands
+31206225375
Visit Website
Give us feedback 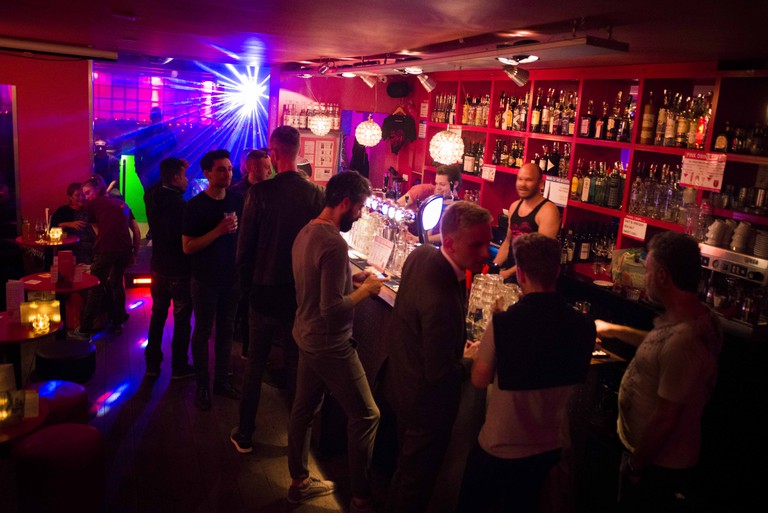 style=”font-weight: 400;”>Prik (which means bubble in Dutch) has been open since 2006. Expect a riot of neon pink, strobe lighting and a bar that is highly Instagrammable. International staff serve a range of cocktails, including Strawberry Cheesecake if you’ve got a sweet tooth. There’s also pink and white prosecco on tap and all the pop music your eardrums can stand. It’s open until 1am except for Fridays when chucking out time is 3am.

Bar, Gay Bar, Snacks
Facebook
Email
Twitter
Pinterest
Copy link
Share
Map View
style=”font-weight: 400;”>This non-profit bar and Amsterdam institution is only open on Sundays. The building used to be style=”font-weight: 400;”>a squat and then style=”font-weight: 400″> a disco called Flux. Later on, a group of volunteers started coming together to serve affordable drinks every Sunday night, making sure that all the profits were channelled back into helping the LGBTQ community. The vodka tonic at this queer disco delivers a kick and is highly recommended. Photography is forbidden and it’s also a wifi-free zone because staff want everyone to socialise.
Open In Google Maps
165 Bilderdijkstraat, Amsterdam-West Amsterdam, Noord-Holland, 1053 DZ, The Netherlands
Give us feedback 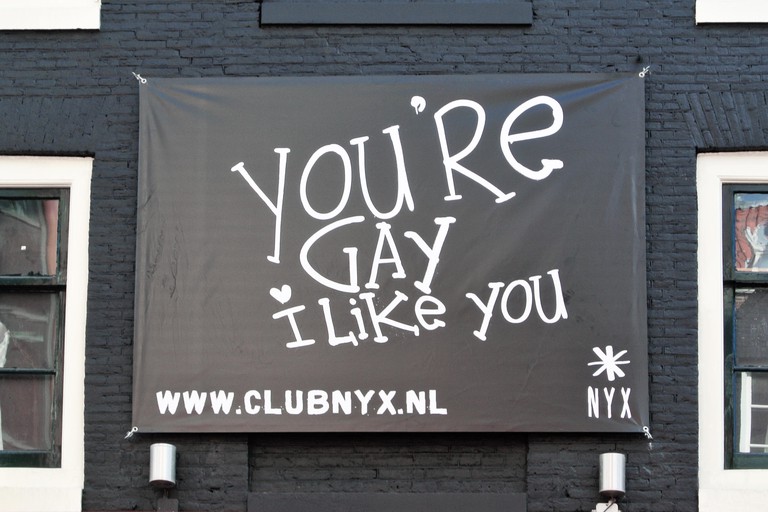 © Firn / Alamy
One of the most popular gay clubs in Amsterdam, Club NYX attracts a lively crowd and is spread over three floors, each with its own music genre. The drinks menu is huge and there’s a DJ booth in the toilets, so you won’t miss out on sounds while you spend a penny. The Amsterdam LGBTQ community is a variety of creative souls, club kids, drag queens, ravers, performers.
Open In Google Maps
42 Reguliersdwarsstraat, Amsterdam-Centrum Amsterdam, Noord-Holland, 1017 BM, The Netherlands
+31682363649
Visit Website
Give us feedback 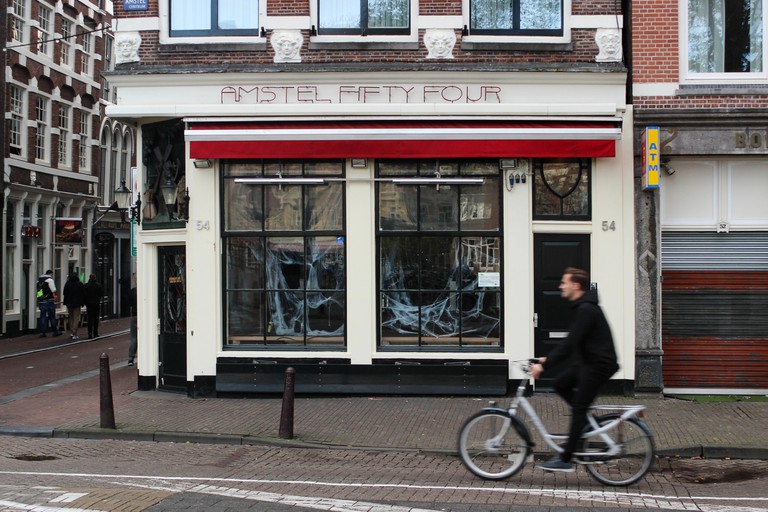 © Jani-Markus Häsä / Alamy
During the day, you might be fooled into thinking that this bar is a typical Dutch brown cafe – albeit a grand one, with an exquisite chandelier and plush booths as well as video screens. But, as night draws in, you’ll spot drag queens and live entertainment adding to the mix. There’s an inexpensive drinks menu and a wheel of drinks spinner if you can’t make your mind up. It’s loud and proud – drop by on a Sunday for the brilliant Drag Fever show.
Open In Google Maps
54 Amstel, Amsterdam-Centrum Amsterdam, Noord-Holland, 1017 AB, The Netherlands
+31612232254
Give us feedback