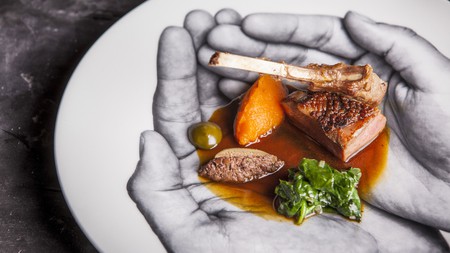 Chef Moshik Roth has held two Michelin stars at his eponymous restaurant, &moshik, since 2013. He talks about the emotion behind his food, as well as his favourite places to eat in Amsterdam.

Born in Israel in 1971, Moshik Roth moved to the Netherlands for love in 1995. A self-taught chef, he opened &samhoud places with his business partner, Salem Samhoud, in 2012 – with the restaurant being awarded two Michelin stars just three months after opening. In 2018, the restaurant was renamed &moshik, but the concept behind the food and Roth’s dedication to his menu remain unchanged.

“Cuisine is emotional,” says Roth. “I come from Israel, where Friday-night dinner is an important moment to sit down with family and communicate. For me, food is about telling a story – sometimes even a fairytale. There is no future without the past – I take inspiration from the baggage I’ve collected along the way. Emotion is by far the most important ingredient in the food I serve at &moshik.” 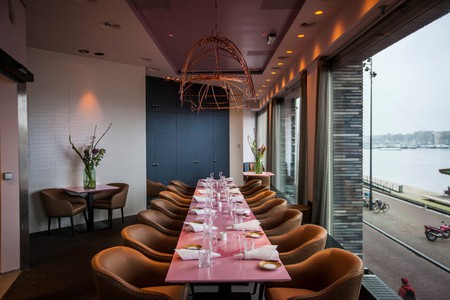 Roth claims not to believe in signature dishes. “The seasons change, the metaphor changes, and so the dishes change,” he says. “The signature is in the emotion – not in a particular dish.” Nowhere is this more in evidence than in Roth’s jardin du marin, served as part of his inspiration menu in spring 2019.

“We live in the Western world, and our culinary exposure to remote places is not much,” he explains. In this dish, he takes the traditions of Turkestan, Uzbekistan, Georgia, Iran, Afghanistan, Pakistan and Northern India, and finds their common denominators in terms of flavour: turmeric, coriander seeds, mint and lemon. From there, “I took my favourite seafoods and built them on these tastes,” he says. “I created my own fairytale from a dream trip that one day I hope to take.” Roth credits the grandmothers from these countries for sharing their traditions with him, allowing the chef to showcase the flavours of the region. 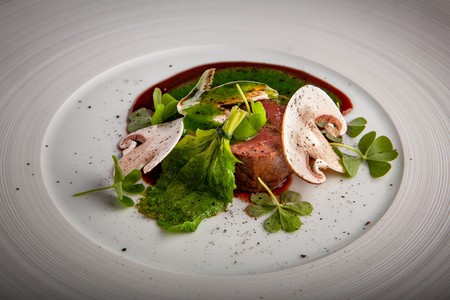 ‘For me, gastronomy is a passion’ | Courtesy of &Moshik

When asked about &moshik’s coveted Michelin stars, Roth says, “For me, gastronomy is a passion, but it’s also more than that – it’s my oxygen. And if it’s like breathing, it’s a reflex. Of course, it’s wonderful to be awarded two Michelin stars, but I’m looking to the future – not to where we are now. We always want to go higher – whether that’s working towards a third star or touching the lives of people all around the world. My goal is to tell my story and to give our guests an extraordinary experience.”

Where does a chef at the top of his game eat out in Amsterdam when he’s not working? “I don’t go out to eat too often,” he says, “but when I do it’s generally to restaurants in a totally different style to mine. Somewhere I can relax with my wife, have a good bottle of wine and enjoy some proper food.”

Here are Moshik Roth’s favourite places to eat in Amsterdam.

Close to the Museumplein in the south of Amsterdam, Le Garage (a converted garage) has been going strong for almost 30 years. With its red banquette seating and curved lights, the restaurant is an Amsterdam institution. “I like the French brasserie style,” says Roth. “You can sit and relax at Le Garage just like you’re in Paris. They also serve very good wine and the best rotisserie chicken in the city.” Chef Roth’s favourite chicken comes in at €25, while Le Garage’s signature dish of pizza tuna (it has to be tasted to be believed) costs €18. Le Garage also serves a good-value Michelin Bib Gourmand menu of three courses for €37, and the restaurant has a huge selection of (primarily French) wines. 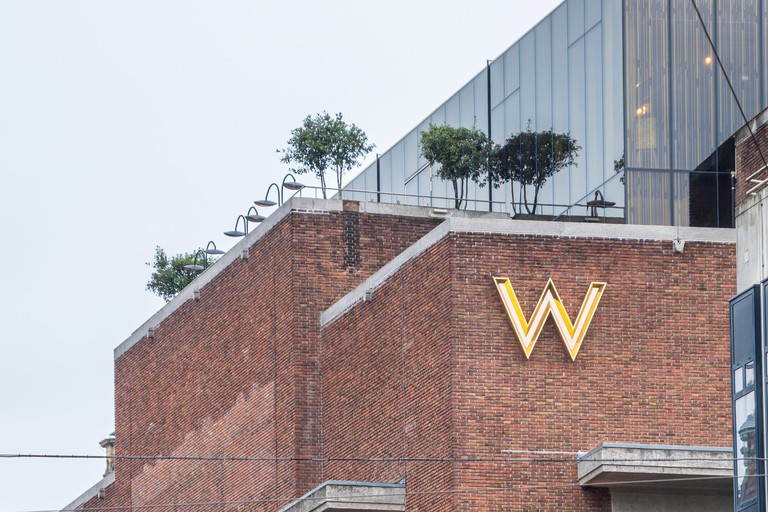 Housed on the top floor of the W Amsterdam, close to Dam Square in the centre of the city, MR PORTER is best known as a gourmet steakhouse. “They serve great meat,” says Roth, “but I actually go there for the vegetarian food!” With its wide range of shareable vegetable dishes (including roasted leeks, which chef Roth especially recommends), MR PORTER is a great place to go with friends. “I like the atmosphere,” he says. “There’s good music, and it’s a great spot to drink a gin and tonic.” And nowhere could be better for said G&T during the summer months than MR PORTER’s spacious roof terrace. 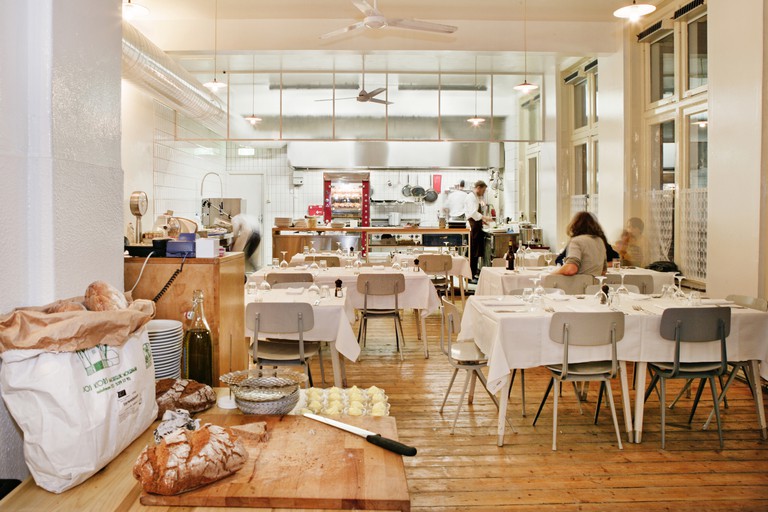 Rijsel is the epitome of relaxed dining | Courtesy of Rijsel

East of the Amstel River, Rijsel is the epitome of relaxed dining done well. “This is my top pick for casual eating with friends,” explains Roth. Rijsel’s food is broadly French, with a nod to Flemish tradition as well. And its iconic no-nonsense interior comes straight from the ’60s modern style that is so befitting of the building it’s in. The restaurant is known for its rotisserie chicken, but chef Roth goes there for the offal. “You can eat things like rabbit’s liver – organ meat that you can’t get elsewhere. Rijsel has a great wine list, too, and it’s not expensive either. The value to price ratio is extremely high.” 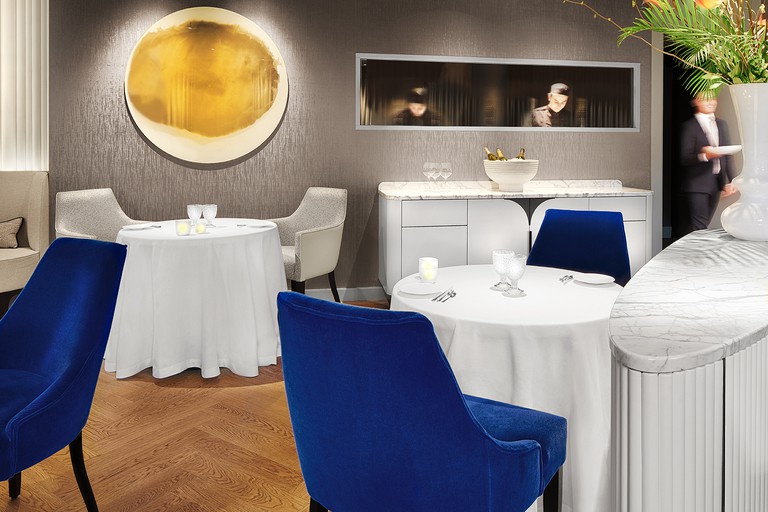 Housed in the Waldorf Astoria Amsterdam, Spectrum is the brainchild of chef Sidney Schutte and restaurant manager Sascha Speckemeier. In 2014, the duo created Librije’s Zusje, which was awarded two Michelin stars within seven months of opening. And on 1 January 2019, the restaurant reopened as Spectrum, a fine-dining establishment that unites its Dutch heritage with innovative flavours and textures. “The team at Spectrum have their own signature,” says Roth. “The chefs there are cooking in their own style, and it’s a style I really connect with.” 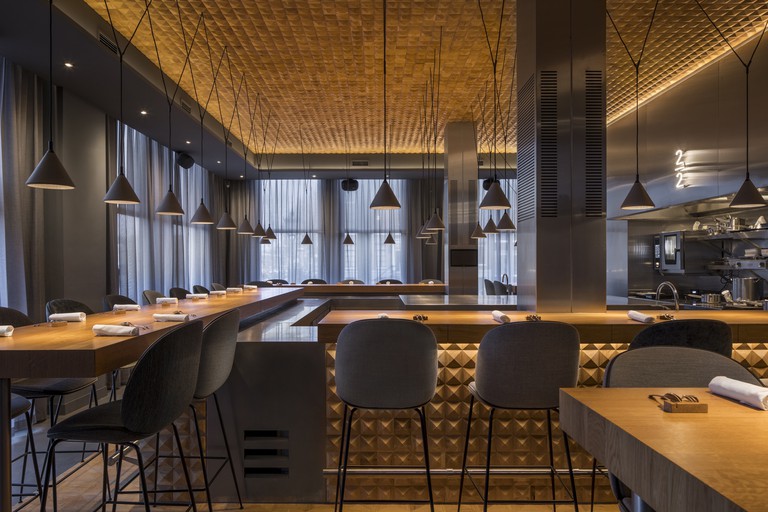 Also with their own unique style are Richard van Oostenbrugge and Thomas Groot of restaurant 212 – the first no-table restaurant in Amsterdam. Opening in early 2018, 212’s mantra is “fewer rules, more adventure” – a mission that recently won them a Michelin star. Guests at 212 sit primarily at a counter that looks over a central kitchen, so you don’t miss out on any of the culinary action. The menu takes its inspiration from all over the world to create a gastronomic spectacle. On what makes 212’s style of cooking so special, Roth concludes, “It’s not for me to define another chef’s style. Their food speaks for itself.”