A Guide to Cycling Etiquette in Amsterdam 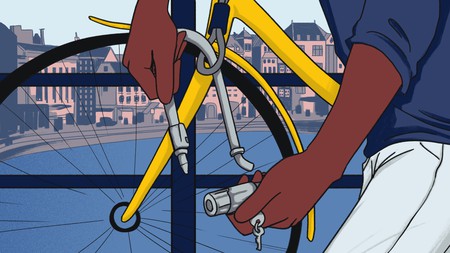 No trip to Amsterdam is complete without setting out on a bicycle and exploring the city via its amazing cycle-path network. To get the most out of your biking experience and avoid injury, theft or even embarrassment, check out Culture Trip’s guide below.

The Dutch have made a conscious effort to prioritise cyclist welfare with cycling paths and explicit traffic rules for drivers.

Should you rent or purchase a bike in Amsterdam?

Unsurprisingly, the majority of visitors to Amsterdam prefer to rent their bikes rather than buy them. There are hundreds of vendors around the city who will gladly lend out their wares for a relatively small price.

Rent a Bike is located in the centre of Amsterdam. It rents Gazelle bikes starting at €6.50 (£5.82) for 24 hours. A-Bike is just down the street from the Centraal Station, making it the easiest location to rent a bicycle. The shop has an extensive list of bikes to rent, including city bikes starting at €14.95 (£13.39), e-bikes, cargo bikes, tandem and children’s bikes. It also offers bike tours around the city.

Nonetheless, it is common to see people selling bikes in busier streets around Amsterdam, often at a suspiciously low price. These bikes are uncommonly cheap because they are usually stolen, and buying from street dealers is rarely a good idea. If you do want to buy a bike, be sure to visit a brick-and-mortar store.

Cycle paths: where to cycle around the Dutch capital

So, you’ve rented your bike, but where do you go? There are extensive bicycle paths throughout Amsterdam. However, you’ll want to choose the most picturesque routes, as the city has a variety of them. Areas such as Ijburg, Oosterdok and Overhoeks and NDSM-werf are particularly suited to anyone looking for a nice day out on two wheels. For a list of routes that will take you through the urban sights of the city centre, or through forests and greenery, check out some of the best places to cycle in Amsterdam.

How to keep your bike safe from theft

Although many bikes in Amsterdam appear to be casually lying against stands or walls, most cyclists meticulously secure their mounts every time they set them aside. Even bikes without visible chains usually feature ring locks on their back wheels, which ensures that they remain immobile. The reason for this is simple – bike theft is rampant in Amsterdam. It is common for cyclists to lose their bikes several times per year. To avoid this, it is always advisable to lock a bike to a solid fixture and to run another chain through one of its wheels for extra security.

Where to park your bike

There are thousands of bike stands scattered throughout Amsterdam, and every part of the city has numerous parking facilities. While it might be tempting to chain your bike to a stranger’s, this will likely end in disaster as Amsterdammers are particularly unforgiving towards this type of behaviour and might feel inclined to attack your ride if they find it attached to their own. Fortunately, it is never hard to find a suitable place to park, and it only takes a few minutes to search for your own spot.

It is extremely uncommon for Dutch cyclists to wear bike helmets. Indeed, most people forgo safety equipment altogether, as motorists usually pay close attention to riders. Nonetheless, Amsterdam’s police force regularly sets up safety checks around the city to see whether cyclists are riding on roadworthy bicycles. During these stops, the police mainly look for bicycle lights and are known to hand out fines if a bike isn’t equipped with proper illumination. If your bike doesn’t come with built-in lights, these items are available for purchase at most supermarkets in Amsterdam, and HEMA always has detachable lamps in stock.

Cycling taboos to be aware of

While riding home after a few beers probably won’t hurt, getting on a bike completely wasted is generally frowned on. Like driving, riding a bike requires concentration and demands considerable focus, especially in busy areas. Also, getting high before riding is dangerous. It is always better to walk home after a session – which isn’t a problem considering that Amsterdam is one of the most beautiful cities in the world.

Travelling by bike during peak hours

Like those of every other major city, Amsterdam’s roads experience a massive influx of commuters during rush hour. Unlike in other cities, most of these travellers are mounted on bikes. During these periods, people tend to be less forgiving towards novice cyclists and will often barge their way through groups of unsure riders if they are taking up their path. For obvious reasons, it is best to avoid these periods altogether or ride with additional caution when surrounded by Amsterdammers in a hurry.

Everyone rides in Amsterdam, including children, parents and the older generation. Indeed, it is very common for mothers or fathers to strap their young offspring to child-size harnesses on the front or back of their bikes. While these hardcore parents are usually experienced when it comes to riding, they won’t appreciate being suddenly cut off from behind. After all, they are carrying treasured cargo. As a rule of thumb, give everyone enough space to manoeuvre in a hurry so that your fellow cyclists can turn without crashing into you.