We look at the preoccupations that drove the literary works of German emigrant writer W.G. Sebald.

After 1945, philosophers and writers wondered what literature in the German-speaking world could and should achieve. The National Socialist Party had manipulated both language and literature for barbaric purposes through their propaganda, strict censorship and rigid control over the country’s cultural output. With the freedom granted by the new democratic government, writers felt an intellectual duty to speak out. At the same time, they were faced with the immediate problem of how to do so without risking accusations of glossing over, misrepresenting or worse, wordlessly ignoring the darkest moments of European history. Some went as far as to argue that the German language itself was corrupted.

The academic and moral dilemma of Vergangenheitsbewältigung (coming to terms with the past) preoccupied the German born and British-based writer W.G. Sebald, who often spoke of the troubling silence of his peers regarding the Nazi period. His father had served in the Wehrmacht under Hitler, yet the war was rarely discussed in Sebald’s childhood home. Sebald criticised the inadequate response to the Holocaust within the education system too. He recalled a teacher playing a short black and white film showing the concentration camps, and then simply switching it off and moving on without discussion. 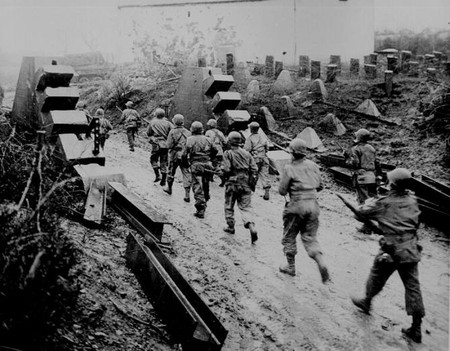 Sebald’s concerns echoed wider criticisms of the Adenauer era. Ordinary citizens grappled with the revelations of Nazi brutality, and the simplest solution seemed to be to ignore the enormity of the war’s legacy and focus on rebuilding the nation. This project was hugely successful, and the astonishing upturn in productivity, stability and democracy during the 1950s led to the coining of the term Wirtschaftswunder (economic miracle). But denazification took place predominantly on a superficial level; behind the scenes, worryingly little had changed.

Streets named after Hitler and his close followers were renamed and the system of government was restructured by the Allies, giving the appearance of a new era for Germany. However, Adenauer and his party were criticised for the swift and lenient resolution of the war crimes trials. Perhaps this phenomenon should not have been surprising given the fact that an estimated 80% of former Nazis remained in privileged positions in the legal and education sectors.

After completing his degree in German Literature at the University of Fribourg, Sebald left for the United Kingdom, where he lectured on creative writing at the University of Manchester and, later, the University of East Anglia. Despite his emigration, he remained actively engaged in writing about German literature and in particular what he saw as the insufficient engagement of German authors with the Holocaust. This was the theme of many of his academic essays in which he criticised Alfred Andersch, among others, for the author’s ‘false identification’ with the Jewish victims.

Sebald was acutely conscious of the power of the written word, with its paradoxical ability to convey truth and to obscure it completely. His concern for language is evident from his professional activities. In 1989 he became the founding director of the British Centre for Literary Translation, and he supervised Michael Hulse and Anthea Bell’s English translations of his own works diligently. He covered their drafts in annotations, often rewriting whole passages. 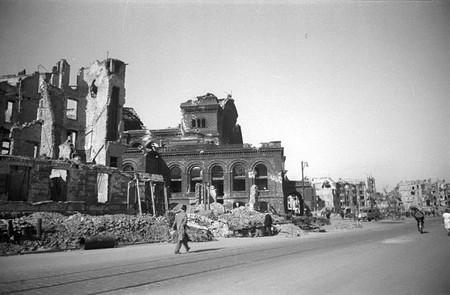 Though always conscious of the deceptive qualities of language, Sebald aimed to use it to break the silence of his countrymen. Sociologist and philosopher Theodor Adorno was among the prominent thinkers who attacked the idea of literature continuing after Auschwitz as if it could be business as usual. Sebald, on the other hand, manages to portray the rupture in history caused by the Holocaust. He achieves this by writing in a fragmentary style, bringing together past and present. He writes in a style of German which is at once fresh and new yet imbued with tradition, pointing to the fact that the past cannot and should not be forgotten. His work shows clear literary debt to Borges, Bernhard and Kafka, and is bereft of modern vocabulary or references to technology and gadgetry.

Sebald’s four main prose works are textual hybrids, mixtures of fact, fiction, history, travel writing and myth. His first two works, Vertigo (Schwindel. Gefühle) and The Emigrants (Die Ausgewanderten), are collections of four stories each. Vertigo includes a biographical story about Stendhal, a story of two alpine journeys made by an unnamed narrator, an episode in Kafka’s life, and concludes with the narrator recalling his return to his hometown ‘W’. The Emigrants uses a similar technique, as the narrator traces the stories of four emigrants from Germany. The idea of Heimat, the German word connoting ‘homeland’ is omnipresent in each of the works, as the characters struggle to connect with foreign lands.

His prose reads like a stream-of-consciousness, with cinema-like segues connecting places and events across time and space. The motif of weaving, which Sebald links to the practice of writing, is central to The Rings of Saturn (Die Ringe von Saturn), his next work and perhaps the most difficult to categorise. Styled as a travelogue following the narrator’s walk through the East Anglian countryside, the English coast becomes the backdrop to exploration of universal issues. The constant conflict between nature and humanity, and the destruction each is capable of wreaking, form the golden thread of the novel.

Each of the texts is enigmatic and disorientating. The reader is constantly reminded of the inability of later generations to understand the past, which becomes simultaneously inescapable yet irretrievable.

Closely related to the issues of memory, language and their deceptive potential is Sebald’s involvement with photography. Each of his works is interspersed with black and white photographs, often grainy and underexposed. Rather than acting as simple illustrations, the photographs seem to work as thematic prompts; the many photographs of temporary abodes (hotels, tents, a caravan) in The Emigrants reinforce the idea of exile.

At times, photographs are used as a form of textual joke, for example a picture of philosopher Ludwig Wittgenstein has the word Augen (eyes) covering the eyes of the photograph. In other instances, the symbolic significance of a photograph eludes the reader. In Vertigo, why has a photo of a flat landscape been chosen to illustrate a train journey which is described as running through mountainous terrain?

The use of photography relates to the issues of testimony and representation. Their integration within the narrative may seem to show an attempt to come to terms with and represent the past, yet their ambiguity asserts the impossibility of doing so. The reader may be reminded of Barthes’ assertion in Camera Lucida that every photograph is a tragedy.

Photography becomes not just a medium for the writer, but an obsession for the protagonist, in Sebald’s novel Austerlitz. Of all Sebald’s works, Austerlitz comes the closest to a traditional novel form, and is almost the most explicitly related to the Holocaust. It tells the story of Jacques Austerlitz, who as a boy was evacuated on the Kindertransport and adopted by a strict evangelical Welsh pastor. As an adult, Austerlitz tries to reconstruct his long-buried identity.

The motifs of ruins, nature and photography are all still there, and the theme of silence rises to a crescendo in this novel, finding a concrete metaphor in the submerged and therefore silent village where the pastor grew up. Sebald depicts both the silence of the victims – Austerlitz describes his willful forgetting as a kind of ‘immune system’ – and the sinister silence of those who prefer to forget the past.

The narrator of the novel is a solitary traveller, similar to the narrators of Vertigo, The Emigrants and The Rings of Saturn. Having been told he is slowly going blind, he chooses to devote his remaining sight to writing down Austerlitz‘s story. Just like the narrators of the earlier novels and, it could be argued, like Sebald itself, he is preoccupied with writing and bearing testimony to the past but the spectres of his own past remain unexplored.

At the time of his death, Sebald’s genius had been recognised and he had been tipped as a future Nobel Prize winner. He took on the challenge of writing literature after Auschwitz with remarkable success; his books deal with the topic of the Holocaust sensitively and thoughtfully, precluding neat resolution. But his work resonates precisely because they go beyond the immediate historical context and trace the patterns of human civilisation.