The 10 Most Beautiful Spots in Germany's Black Forest 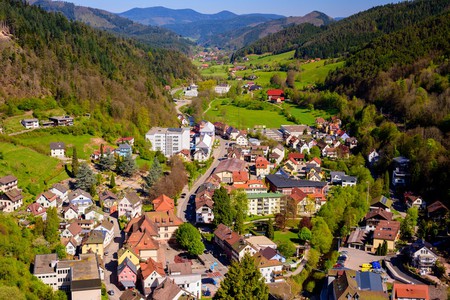 Ever wanted to visit the setting of the fairy tales written by the Brothers Grimm? Legend has it they were inspired by Germany’s Black Forest (Schwarzwald)—the spectacular mountain range in Baden-Württemberg.

The Black Forest gets its name from the oppressive canopy of evergreens looming above the forest floor. Home to elaborate cuckoo clocks, striking half-timbered houses, ruined castles and quaint towns, the Black Forest is a magical land full of cultural traditions. Here’s our guide to some of the most beautiful spots in the area.

Baden-Baden, one of Europe’s most fashionable spa towns, is an ideal base for exploring the Black Forest and the perfect place to stay for maximum pampering. Located in the rolling hills of the northern part of the forest, the 19th–century town is filled with striking Belle Époque-era architecture and old-world luxury. Baden-Baden has a vibrant cultural community with events and art exhibitions throughout the year. Take a guided walk or adventure tour into the heavily wooded Black Forest National Park, or stay in the town center and enjoy the curative waters of the thermal baths, which were built in roughly 1810. 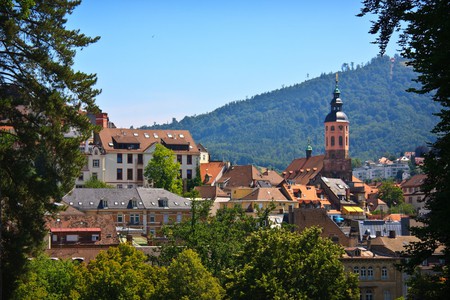 Not quite as well known as Baden-Baden, Bad Wildabad is another popular spa town and a cheaper option for a home-base in the north of the forest. A tunnel cleverly diverts through traffic so that the area feels as isolated from the world as possible. Bad Wildbad has beautiful views of endless pine trees and the gorge of the Enz river. This town is also filled with thermal baths, which naturally hover around 95 degrees Fahrenheit (35 degrees Celsius). Enjoy the picturesque village, and be sure to visit the idyllic Wildsee—a small lake outside of the town center. 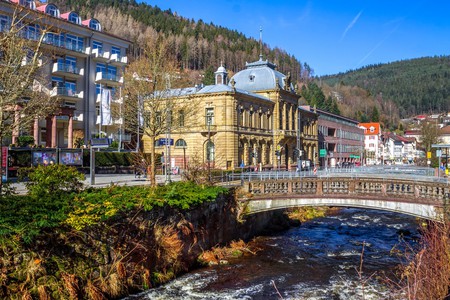 Calw sits in the north of the Black Forest with a reputation as being one of the forest’s prettiest towns. Nobel Prize-winning novelist Hermann Hesse (1877-1962), who wrote Siddhartha among many other books, was born in Calw. The town features a museum and a statue dedicated the famous author. The picturesque market square is a great place to start your tour of the city. Surrounded by 18th-century half-timbered houses, Calw’s square is the picture of a quintessential Black Forest town. The city owes its current growth to tourism—many new bistros, shops and ice cream parlors have recently opened to cater to visitors. 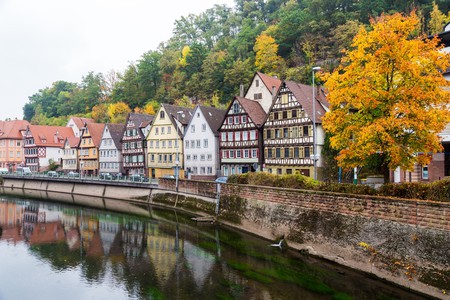 This idyllic mountain resort is made up of nine separate villages, and the recent addition of high-end hotels and bed and breakfasts serving incredible cuisine have put Baiersbronn on the map. The area boasts an incredible eight Michelin stars in total, being home to two restaurants with three stars, and one with two stars. So there’s no shortage of choice if you want to indulge in fine dining. When you aren’t gorging on excellent cuisine or enjoying long walks through the conifer-strewn forests, take a trip to the ski slopes or visit the area’s golf courses. And don’t miss the nearby 12th–century monastery—the Allerheiligen ruins—hidden in a quiet, secluded valley. 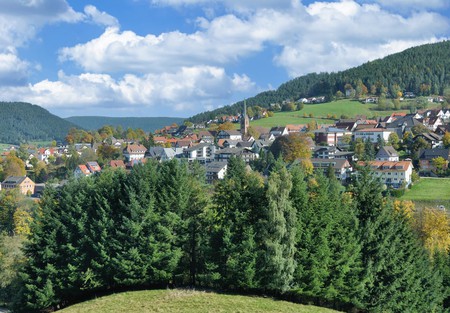 Freiburg is a university town and an excellent base from which to explore the southern side of the Black Forest. The cheerful town sits at the bottom of the Black Forest’s wooded slopes and vineyards, and it is chock-full of gabled, half-timbered houses and twisting cobblestone streets. The local student population has given the town a lively nightlife scene, but anyone can enjoy the lovely beer gardens along the canal. Freiburg has been named Germany’s warmest city, with unusually high levels of sunshine. As a result, it is a center for solar energy. Hike up through the woods or ride the Schlossbergbahn cable car up the Schlossberg mountain to the lookout tower where you can enjoy views of the city, which include sightings of 11th–century Münster cathedral’s iconic spire. 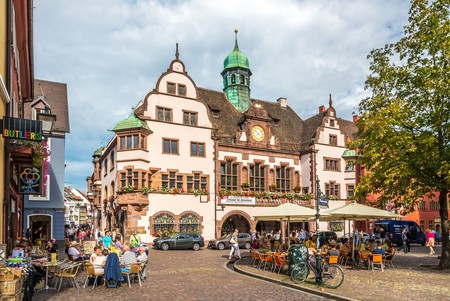 Badische Weinstrasse translates to ‘Badische Wine Road’, and the 99-mile (160-kilometer) route is located in the foothills of the Black Forest. The purpose-built Weinstrasse was created in 1954 to meander through the wine-growing areas of the Black Forest and end up in Weil am Rhein, near the Swiss border. Travelers can drive from Baden-Baden to Freiburg along this alternative route, and instead of dull motorway sights they will pass by historic castle ruins and peaceful vineyards. Stop in Durbach for Durbacher Winzergenossenschaft, a wine co-operative with a winning selection of well-priced local wines. 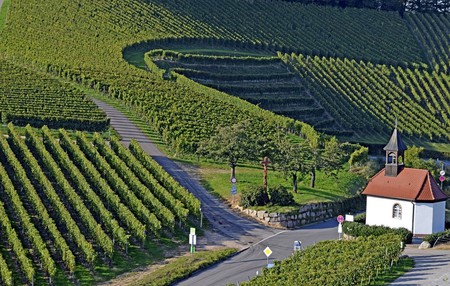 View across the vineyards of Baden Germany, towards a small chapel near Durbach | © SF photo/Shutterstock

This glacially carved lake in the southern region of the Black Forest is one of the area’s most popular resorts. The lake is around 1.2 miles (2 kilometers) long and 0.6 miles (1 kilometer) wide, and is the largest natural lake in the Black Forest. Travelers flock to Titisee to swim, windsurf and sail in good weather. Occasionally, in the winter, the lake will freeze over enough to allow ice skating. There are beautiful areas for lakeside strolls throughout the year, including a 5-mile (8-kilometer) trail around the lake that leads up the Hochfirst Mountain. Surrounded by tall pine forests on the low, rolling mountains, Titisee Lake is a place of otherworldly natural beauty. 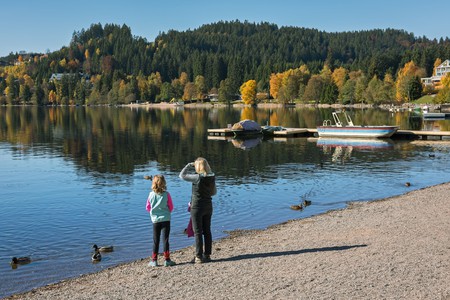 The shore of Titisee Lake in autumn, Germany | © Natalia Paklina/Shutterstock

Germany’s highest waterfall plummets down a 535-foot (163-meter) mountain slope into the valley of Triberg. The falls are formed by the Gutach River and located at the head of the Kinzig and Gutach valleys. Enjoy the view of the gorgeous natural scene from the bottom of the falls. Come after a heavy rain or a snow melt to see the falls at their best (and loudest). The main entrance can be reached easily from the city center in Triberg, a town that caters to tourists with a huge number of cuckoo-clock shops. At night, the illuminated water is striking, and even in the winter, the Triberg Falls look beautiful surrounded by snow. 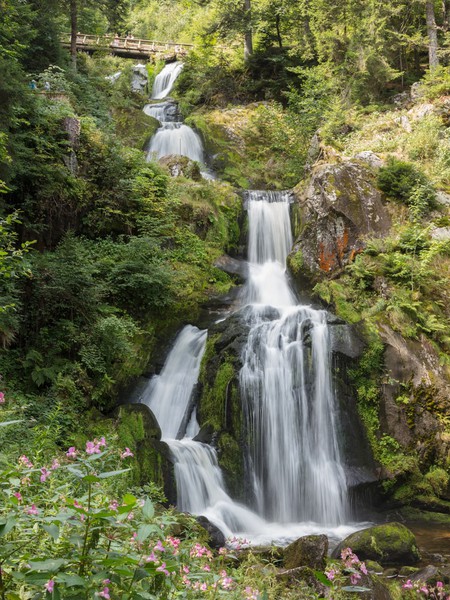 Take the scenic drive along the Schwarzwaldhochstrasse from Baden-Baden to see the central Black Forest region’s quaint towns. Kinzig and Gutach Valley are heavily forested areas where many traditional Black Forest customs originated, like the cuckoo clock and the Bollenhut, a ladies’ hat topped with red pom-poms. In these sleepy towns, visitors will feel the magical and mysterious nature of the Black Forest come to life. While visiting the region, make a stop in the brewery town of Alpirsbach, and visit Schiltach to see classic examples of timber houses that burst with color and character.

Heidelberg, an old town on the river Neckar, is the epitome of German romanticism. Home to the country’s oldest university, The University of Heidelberg, and one of the most popular castle ruins in Germany, this town is filled with majestic cityscapes and a palpable historic atmosphere. The red-hued castle, located on the northern slope of the Königstuhl mountain, was destroyed and rebuilt over several hundred years, so it has a mix of Gothic and Renaissance styles. Visit the castle gardens for a fantastic view of the city. Take a walk through the baroque-style Old Town and view the historic stone bridge, built in the 1780s. Or take a stroll along Philosophers’ Walk, a famous ramble along the banks of the Neckar where Heidelberg’s philosophers and professors came to contemplate their high-minded ideas. 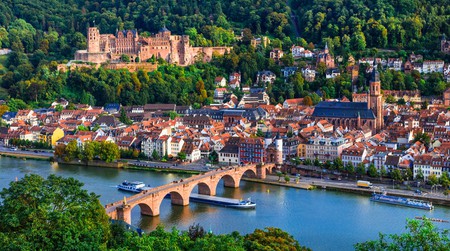