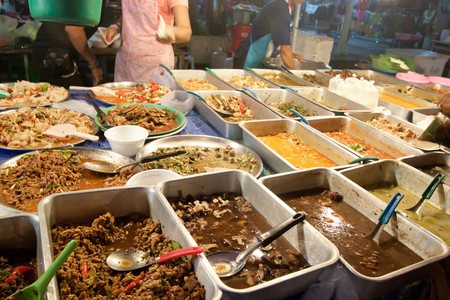 Sukhumvit was known as one of the best places for delicious street food in Bangkok. After the popular street food vendors on Soi 38 were forced to vacate, and other Bangkok street food stalls closed, people were left wondering where to go. Here’s where you can still find great street food in Sukhumvit.

Okay, we’ve just said that the food sellers of Soi 38 were made to leave. And that’s true—vendors no longer line the street with an enticing array of delights as previously. People have to make a living, though, so some of the vendors relocated to a sheltered area underneath Sutthi Mansion close to Thonglor BTS station. While there are fewer stalls than before, the small market continues to dish up a good selection of the street food dishes that made the area so popular with foodies in the past. Reasonable prices, delicious flavours, and the atmosphere continue to draw people here, with favorites like pad Thai, mango sticky rice, satay, fried rice dishes, papaya salad, banana roti, and stir-fried morning glory among the choices available. It is, however, more like a food hall now, and people who remember Soi 38 in its heyday will likely be somewhat disappointed. 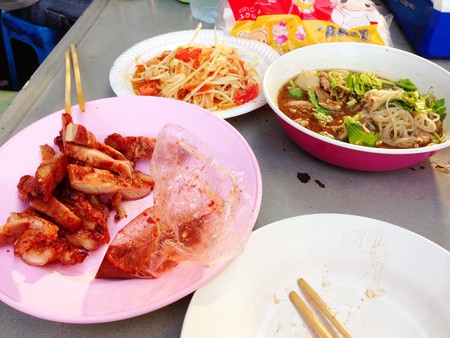 Quick meal on the streets of Bangkok | © Karl Baron / Flickr

Sukhumvit Road Street Market sets up each evening, stretching between Thonglor and Ekamai (from Soi 1 to Soi 20). While many stalls have non-edible items, like clothes, sunglasses, watches, and trinkets, there are also good food vendors along the street. Some have small areas where you can sit and enjoy your meals, whereas others have takeaway dishes or snacks only. 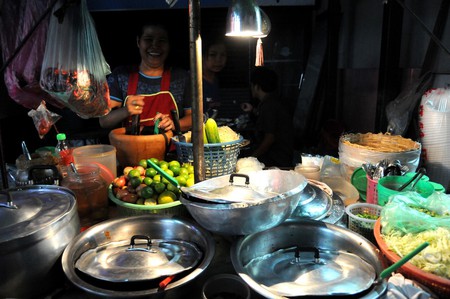 One of Bangkok’s red light areas, Soi Cowboy is more associated with raucous nightlife than snacking. If your stomach can wait until night time though, head down Soi Cowboy at closing time. Several street vendors quickly set up their stalls and start the oil sizzling, mainly to feed the bar girls who are finishing work for the night. Meals are authentic and not adjusted for foreign tastes at all—be sure to ask for just a little (or no) chilli! The sellers don’t hang around long, just long enough to dish up food to whoever’s hungry before packing their carts up and disappearing again into the night.

The large food court in Terminal 21 mall offers you the best of Thai street food… without the street! You do, however, get to explore an airport-themed shopping centre while making your way to the food stands. There are plenty of places to sit. With higher standards of cleanliness and sanitation than many roadside sellers can provide, this is a good place to enjoy reasonably priced dishes that are (or were) commonly found on the streets in, what many would say is, a nicer environment. Glass-fronted cabinets are filled with colourful vegetables, broths boil in large pots, and the sizzles of meat heating oil can be heard clearly. There’s also a selection of popular dishes from other countries too, including Japan, South Korea, India, and China. 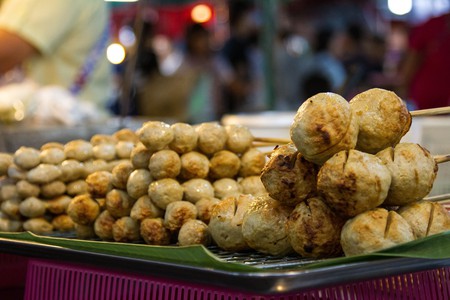 Also commonly referred to as Soi Arab, Sukhumvit Soi 3/1 is at the heart of Bangkok’s Arab community. While you’ll find street stalls with typical Thai food you can also look forward to Arabian street food delights, like falafel, kebabs, and schwarma. Open-fronted restaurants with kitchens close to the pavements make browsing and ordering items to go a breeze, even though the establishments may not be typical food carts.

The Eastern Bus Station at Ekkamai has a modest food court with an assortment of dishes to keep hungry travellers satisfied. Various types of meat, seafood, and fish ball skewers are widely available, as well as rice dishes and noodle soups. While this probably isn’t worth going out of your way to visit, it’s another remaining place where vendors dish up street eats. Of course, if you’re catching a bus from here, tuck in! 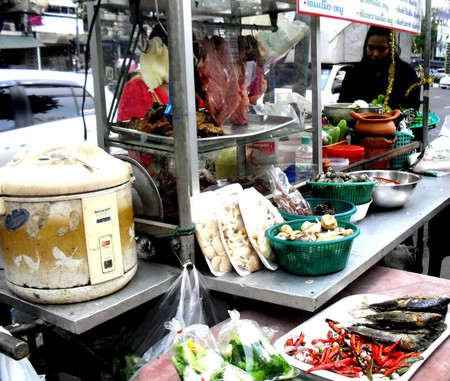 Food carts can still be found tucked away up many of the small streets (sois) of Sukhumvit Road, and there are also many hole-in-the-wall-style restaurants that, although not strictly street food establishments, add to the quick, affordable, and tasty food scene of Bangkok.