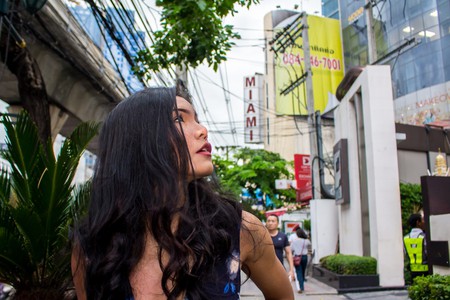 Taking on Thailand solo can be a tremendously rewarding experience, but the prospect of navigating the unknown can unleash some anxiety. Check out our complete toolkit for navigating the Land of Smiles as a solo female traveler — from the depths of the southern coral reefs to the northern mountain peaks, and all the temples you can handle in between. Our recommendations will help you handcraft your dream trip! 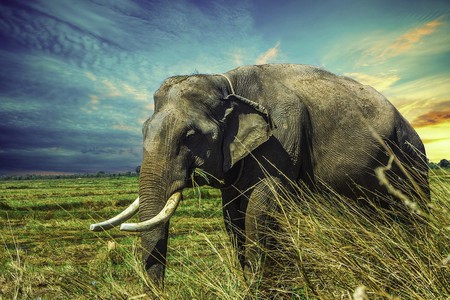 Elephants are one of Thailand's national treasures, and visitors can log some one-on-one time with the gentle giants at conservation parks throughout the country | © joeclub_ake / Pixabay

Thailand’s seasons vary countrywide, and even then, the tropical climate is completely unpredictable. Check the monsoon schedule before booking your trip so you can pack accordingly, but don’t expect the worst — the sun’s always shining somewhere over the Thai Kingdom.

It’s not all surf and sand

As tempting as it is to pack your bag to the brim with bikinis, exploring Thailand could take you through waterfall treks, climbs up to dizzying viewpoints, to majestic temples, or rooftop cocktails against Bangkok’s skyline.

Here’s what we recommend bringing on your trip:

– Comfortable shoes and good socks, suitable for both city touring or light trekking.

– UV-protective, scratch-resistant sunglasses, but we advise leaving your favourite pair at home.

– Bangkok clubs enforce strict dress codes and turn away anyone in flip-flops, so if you plan to party in BKK, keep that in mind.

– Light jumper, such as this one that even has a security-zip front interior pocket and repels mosquitos.

– Swimwear that’ll stand up to watersports.

That said, be a travel minimalist

Thai night and weekend markets stock up on everything imaginable, while shops and boutiques countrywide have unique skincare products, clothing, and accessories that’ll need space in your luggage! Anything else you need on-the-go is easily available at the seemingly endless number of pharmacies or mega-malls. 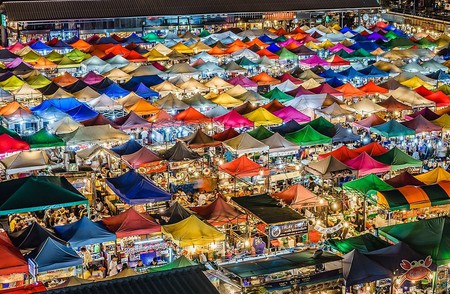 Do stock up on the following:

– Reef-safe sunscreen, since SPF will be your new best friend, though you should watch out for dangerous chemicals like oxybenzone

– Biodegradable wipes, though we promise you’ll learn to love the “bum gun”

– Menstrual cup, as tampons are very expensive in Thailand and generate a lot of waste

– Tinted moisturizer with SPF, since you won’t want to wear heavy makeup that sweats off in the heat or in the sea

With a deeply engrained Buddhist culture and accepting social philosophy, crime rates are very low in Thailand. Those behind the minimal crime that’s reported by tourists are, in fact, other tourists, and injuries are more often than not self-inflicted (and avoidable). 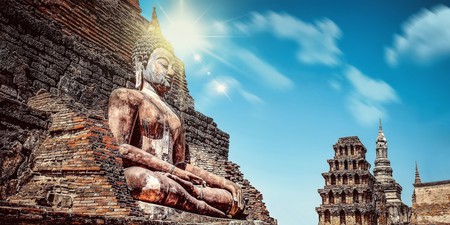 – Reconsider renting that motorbike. Thailand’s roads are not the best place to learn how to drive. Shops will rent motorbikes to almost anyone, holding your passport as collateral, but even a scratch or ding can cost you. If you get injured, insurance companies won’t cover medical bills of an unlicensed driver, leaving a pile of bills and a new “Thai tattoo” from road rash.

– If you rent a scooter, only rent from a business that is reliably recommended.

– With activities like scuba diving, rock climbing, abseiling, or any of Thailand’s awesome offerings, the cheapest option is not always the best option. Those few extra baht may buy you a higher-quality adventure, better equipment, professional instructors, and even insurance.

– Pace yourself. Thailand’s party scene is a tour de force — from the chic clubs of Bangkok and earthy jungle raves in Pai to boho beach parties. But take your common sense in your carry on. Watch your drinks as they’re poured, don’t leave them unattended, and drink water. It may seem logical, but with pharmaceuticals like diazepam sometimes available over-the-counter, its important to stay as vigilant as you would in any party environment. 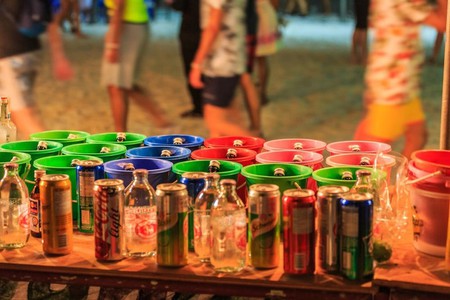 – While street food is a straight-up delicacy nationwide, it’s still a good idea to get your Hepatitis B vaccine to combat food-borne bacteria. Consult your doctor regarding other travel vaccines, but unless you’re heading into the depths of the jungle, you’re at minimal risk.

– The tap water is not potable, but you can save money and avoid plastic waste by taking advantage of the free filtered drinking water available in most restaurants and hotels. This water is sourced from licensed distributers, which also supply the restaurants/bars with filtered ice.

– On arrival at the airport, look out for kiosks with cell providers offering “tourist SIM cards,” with data plans active for anywhere from a few days to a month. AIS, TrueMove H, and DTAC offer the most consistent coverage countrywide. 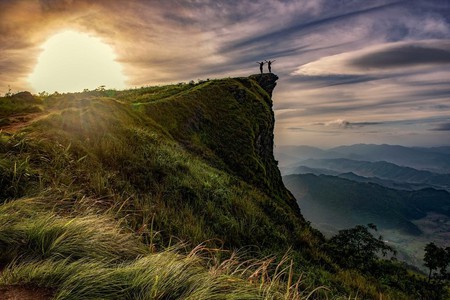 Thailand’s travel routes make it simple to squeeze in that incredible spot you keep hearing about, like Phu Chi Fa, the sacred mountain near Chiang Mai. | © sasint / Pixabay

– Use a booking agent, since with a seemingly infinite number of train lines, bus routes, and boat schedules, you’ll save time, money, and brainpower by going to an agent. Tell them your end destination and they’ll arrange all the chutes and ladders to get you there.

– Ask for the meter because a common, yet avoidable scam occurs when a taxi driver does not switch on the meter, then charges a wildly higher rate upon arrival.

– Save even more hassle with the Grab App.

– Take the night train/night boat; at first look, the trains and cargo boats aren’t the most aesthetically pleasing, but once tucked into your bunk, it’s like your average hostel — only moving. Pro tips: book lower bunks, bring ear plugs or headphones, and wear your jumper, as they crank up the air-con.

The deep south of Thailand along the Malaysian border is the only area regarded as unsafe. The region has experienced separatist violence since 2004, and today, there’s a constant military presence there to keep peace. However, the highway route that crosses the border is removed from the conflict, bussing hundreds of tourists across the border daily to Malaysia. 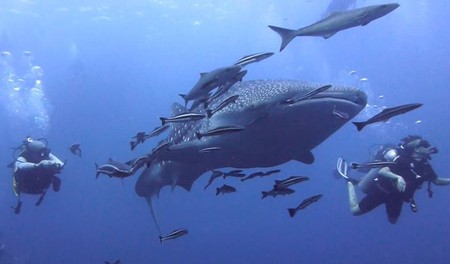 The deep south of Thailand is a tumultuous area, but the Southern coastlines are safe as can be and offer easy access to some of the best snorkeling and scuba diving parks in the world | © Roctopus Dive

Wherever you are in the country, avoid “ping pong” or live sex shows. Not only are they officially illegal in Thailand, but they straddle a pretty murky grey area between what could be a consenting performer or straight-up sexual slavery and human trafficking. Thailand has been trying to combat its “sex tourism” image for years, but it’s the demand of curious tourists that keeps the abusive industry afloat. These shows are also hotspots for scams and corruption, advertising a low entry fee but then charging a super shady “exit fee” that is, of course, exponentially higher. Stick to the ladyboy shows – they’ll absolutely impress, and without the moral ambiguity. 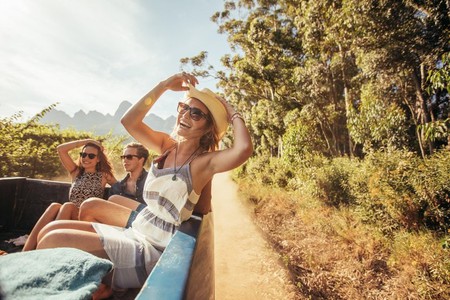 Joining tours, classes, or trying something you never thought you’d do are instant ways to meet fascinating people from all over the globe. | © Jacob Lund / Shutterstock

With so many travellers making their way through the Land of Smiles, it’s easy to either link up with others or trail-blaze solo. If you prefer the former, definitely do the following:

– Stay in a hostel — gone are the days of Leonardo DiCaprio’s Khao San nightmare in The Beach, as across Thailand today hostels are sometimes even nicer than local hotels. Dorm room not your thing? Book a private or semi-private room while still reaping all the social benefits of hostel life.

– Book a scuba diving course — or Muay Thai class, yoga retreat, or whatever suits you. Spending several days learning a new skill with others forges a unique bond that can outlast your trip.

– Volunteer, since there are plenty of ways to give back to the community in Thailand and though many may require longer commitments, Trash Hero is a good place to start for a feel-good surge. The NGO has dozens of chapters around Thailand that meet up once a week to clean beaches or waterways, wrapping up with a sunset beer and food. Not only will you meet other travelers but actual community members. 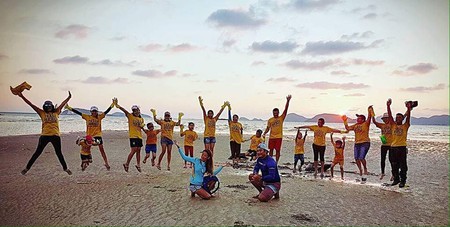 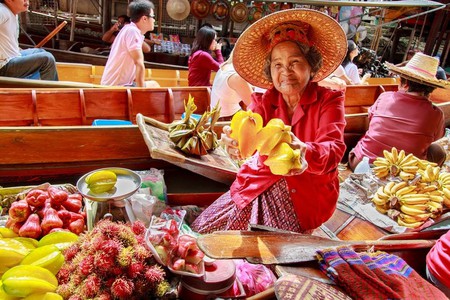 Absolutely nothing will get you further in the eyes of Thai locals then demonstrating respect toward their culture. Avoid these common faux pas:

– Keep the bikini or swim trunks for the beach. As a deeply Buddhist country, it’s considered wildly inappropriate to walk around the streets in just swimwear.

– Keep your feet on the ground — while Thais are generally not offended by accidental cultural faux pas, putting your feet up on anything or pointing your feet at another person is still considered offensive.

– Don’t ride elephants, as the animal is sacred to Thai culture, and elephant riding schemes shorten their lifespans considerably. Visit reputable sanctuaries instead.

– Travel sustainably — Thailand’s been in the media hot seat lately for its plastic waste problems, and recent studies indicate a significant portion of this plastic is generated by tourists. Either way, green is trendy today in Thailand, so use our guide for tips on traveling more sustainably.

– Learn Thai words — Thai is an admittedly tricky language, but knowing two simple phrases* will get you far with locals:

Pair each with a wai and you’re golden!