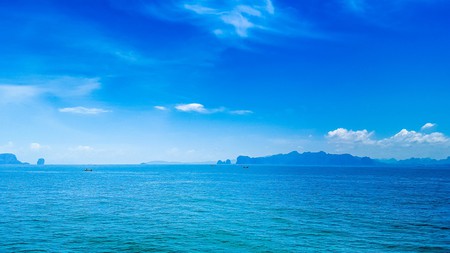 Whether you are a recreational diver or exploring under the sea is your full-time job, Thailand is equipped with some of the most well-known and stunning of dive sites in the world. Here are the most famous and beautiful diving spots in Thailand.

The island of Koh Tao is a wonderful place to go diving. Over thousands of islands can be found off the mainland, but this particular island remains many tourists’ top choice for exploring under the sea. With cheap dive shops galore, experienced divers and newbies alike flock to the smallest of the three islands in the Samui Archipelago. One of the most noteworthy of them is all Sail Rock, also known as Hin Bai. The site itself is about a 90-minute boat ride from the island, but the end destination is well worth the scenic journey. Divers actually see the rock rising out of the Gulf of Thailand when approaching, as it sits some eight meters out of the water. The deep dive site goes over 40 meters below the surface in some areas. Because it is so far away from the island, the marine life here is both vast and unique, seemingly unaffected by the tourists who make their way to Koh Tao. The rock’s cave-like make-up, also known as the chimney, is a great challenge for experienced divers, as well. At about five meters deep, divers can enter and descend to about eight meters while inside the rock. 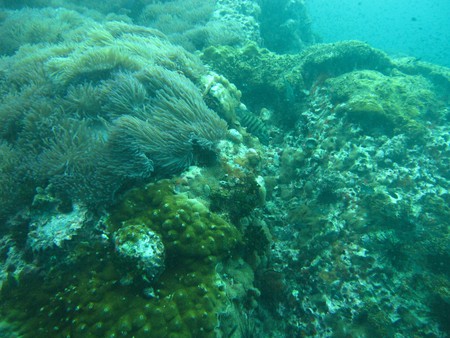 The marine life in the Andaman Sea ranges from manta rays to whale sharks. The visibility is as clear and translucent as a glass jar. It may come as no surprise then, that some of the best snorkelling and diving sites in the world are found here, including along the coasts of the Surin Islands. Located in the Tha province of Phang Nga, this stretch of islands are some of the most remote, being some 37 miles from the west coast of Thailand. Because it is so far from the mainland, tourists are less likely to visit, making it both remote and unspoiled by visitors. In addition to marine animals, divers here will also find that the reef is vast and seemingly untouched, with diverse coral throughout. This is largely due to the fact that the islands, as part of a UNESCO development, have been a Marine National Park since 1981. One of the most famous diving sites, Richelieu Rock, is found here as well. Divers are almost guaranteed to spot a whale shark, especially during the months of February to April. 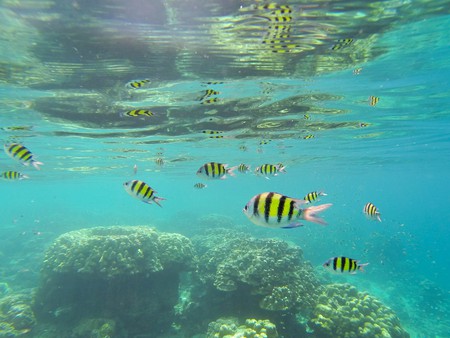 What is it about shipwrecks that divers simply cannot get enough of? Some divers relish the artificial reef they are about to explore, sometimes more stunning than natural ones. Others enjoy the eerie atmosphere a sunken vessel creates, where the decaying craft holds nothing but sea life where people and goods used to reside. Luckily for divers making their way to Thailand, there are several shipwrecks found on the coast worth exploring, including the HTMS Chang, off the island of Koh Chang. This shipwreck is one of the newest in Thailand, and it was sunk on November 22, 2012. It is located a mere four miles off the coast of the island. At its deepest, the bottom of the vessel is some 30 metres deep, and the boat itself is 100 metres long, making it the largest shipwreck in the country. 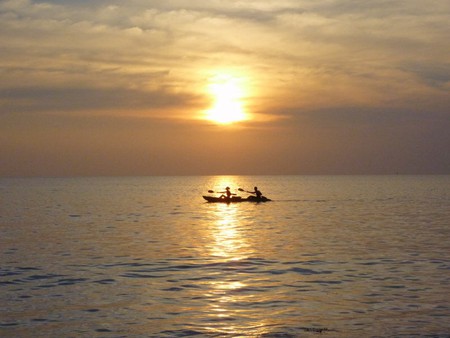 The Island of Koh Ma

Diver rookies will be pleased to hear that Koh Ma, off the island of Koh Phangan, is a great site for those looking to get certified for the first time, or those looking to freshen up their diving skills. It is not far from the shore of Mae Haad Beach on Koh Phangan, yet it is still home to a plethora of sea life, including the colourful parrotfish and intimidating-looking barracudas. The island is only attached to Koh Phangan by a sandbar, making it relatively easy to get to as no boat or any other form of transportation is needed. In addition to being an ideal site for new divers, there are a few accommodation options on the island, making it a quiet getaway from the busy island of Koh Phangan. 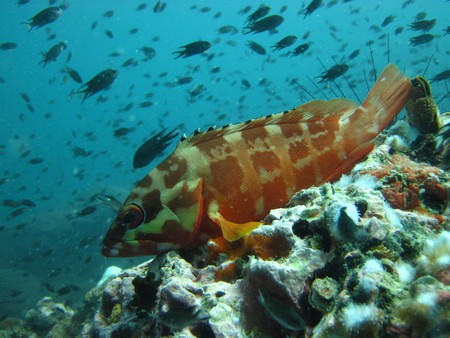 There are a number of pristine islands in the Phang Nga Bay, including the island of Koh Lanta. It is certainly the quietest island in comparison to some of its party-ridden neighbours. The island is home to Mu Koh Lanta National Park, which protects and preserves two of the most famous dive sites in Thailand; Hin Daeng and Hin Muang. Many travellers believe these sites to be some of the best in the world, and a trip to Thailand without seeing them is a wasted opportunity to go on a life-changing dive. Living up to its name, the soft corals found here are many different shades of red. In addition to stunning coral, whale sharks and manta rays are commonly spotted here. It’s equally as stunning neighbour, Hin Muang, otherwise known as Purple Rock, is made up of soft purple coral. Its vertical wall is the tallest one in Thailand, and one side reaches a depth of 60 metres, while the other continues on even deeper. It is best to dive here during the months of November through to April. 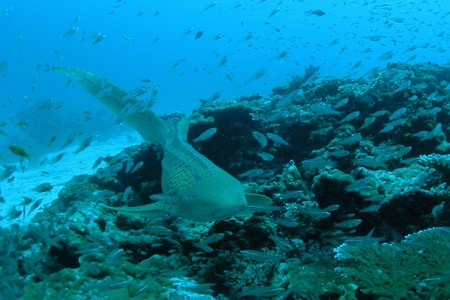 Located some 50 miles from Phuket are the Similan Islands. All of the eleven secluded islands sit amongst the Mu Koh Similan National Park and are protected by the Thai government. Established in 1982, the area protects an abundance of soft and hard coral, a wide array of marine life, and the crystal clear water that hugs the islands’ beaches. This is one of the reasons as to why these islands are home to some of the best dive sites in Thailand, and some might argue they are the most stunning in the entire world. 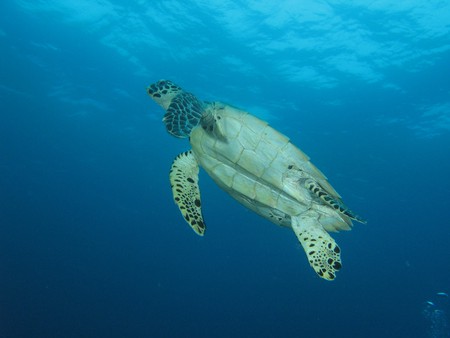 Phuket may attract herds of backpackers, with its promise of a thriving nightlife, but the island also provides underwater explorers with a handful of stunning dive sites. One of the most popular of them all is the King Cruiser wreck. The car and passenger ferry is now home to coral-ridden toilets and an abundance of marine life. Unlike many wreck dives which were intentionally sunk to create artificial reefs, the King Cruiser sealed its watery fate after crashing into the Anemone Reef while travelling between Phuket and Koh Phi Phi on May 4, 1977. Over 500 passengers were forced to jump ship, although fortunately no one was killed. Having been submerged for almost 40 years now, the wreck has attracted a wide array of marine life, and coral continues to make both the interior and exterior of the ship both eerie and stunning. The ship itself is about 85 metres long and 30 metres wide, and it sits some 33 metres deep on the ocean floor. 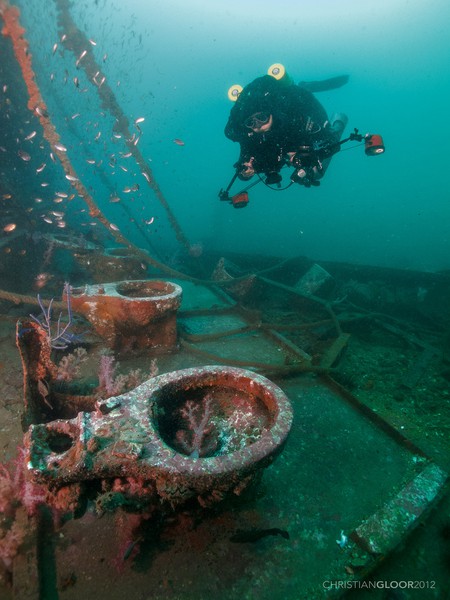 About 90 minutes by boat from Phuket is Shark Point. If the name did not already give it away, this particular dive site is home to a number of Leopard Sharks. Fret not, as these unique animals are usually quite submissive, and tours generally go out daily with groups of divers ready to explore. In addition to Leopard Sharks, Shark Point also boasts of colourful tropical fish, Moray Eels, and vibrant soft coral throughout. The site itself is rather large, and divers could take a few days to explore the stunning site in its entirety. The depth ranges anywhere from 10 to 30 metres, making it a good dive site for beginners and experts alike. 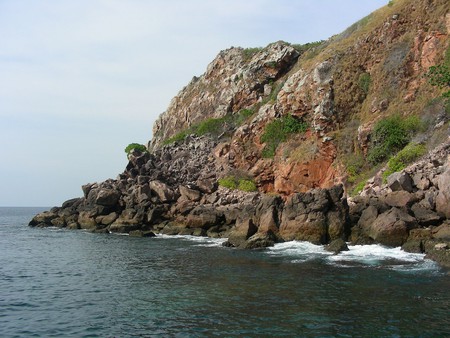 Shark Point 2 | © Courtesy of Doug Beckers/Flickr
Give us feedback