11 Things You Should Know About Thai Culture 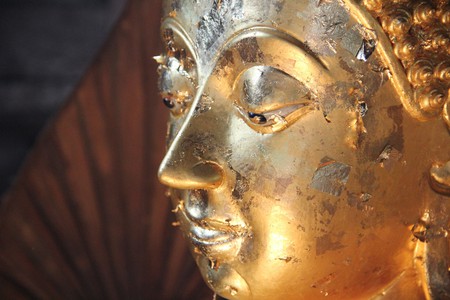 You’ll quickly notice many differences when travelling around Thailand. Things like Thais greeting each other, showing respect, apologising, and saying goodbye with a gesture known as the wai, without a handshake in sight. Thai culture has many idiosyncrasies, big and small. Here are some examples.

Family almost always comes first in Thailand, with a much greater emphasis placed on the extended family than it typically is in western countries. If you’re shocked by the number of siblings a Thai person has, it’s highly likely many of those are cousins—there’s no word in Thai for cousin and people refer to cousins as their brothers and sisters.

It’s normal for extended families to live close to each other, with many Thais maintaining strong links with their home villages even if they move away for work. It’s fairly common for children to be raised by grandparents or aunts and uncles if their parents need to work elsewhere, such is the role of extended family in everyday life. Younger members of the family are expected to help take care of older members. This can be financially, or by doing a range of chores. 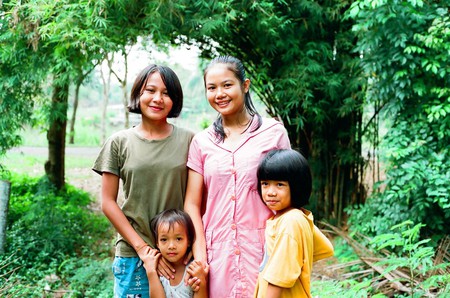 Although it may not be immediately apparent, status is a huge thing in Thai culture. Age, family connections, job types, education, and income levels are all contributing factors to a person’s perceived status in society. Status is not fixed, as in some cultures; a Thai can gain or lose status if their circumstances change. Thais perform different versions of the wai depending on a person’s status, and there are social rules concerning who should offer the first wai. Status is important when a group of people are socialising together—it’s traditional for the highest earner to foot the bill. 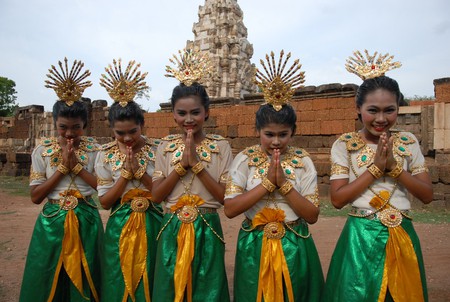 When talking with each other, Thais have words that indicate a person’s age, using pee before an older person’s name to show respect, and nong for somebody younger than them. Things aren’t always quite so simple, though, as a younger person may be referred to as pee if they have a higher status, for example through marriage or by way of their profession. These small social rules are easy to miss by an outsider but are tightly woven into the fabric of Thai culture. 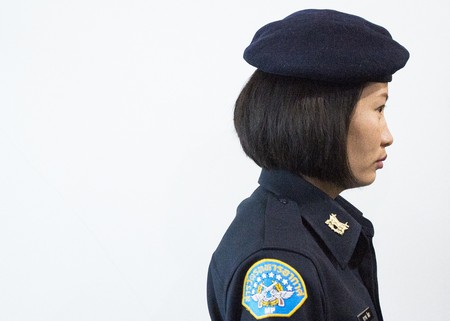 Thai soldier | © Chairman of the Joint Chiefs of Staff / Flickr

Loss of face and respect are big deals

Respect, shame, and the concept of face are important in Thailand, perhaps more so than in many western countries. The use of language and the wai are just a couple of ways for Thais to show respect. It’s considered bad form and disrespectful to visit somebody’s home without taking at least a small gift. Not removing shoes before entering a home is also a big sign of disrespect. Disrespecting someone, in a variety of ways, can cause a person to lose face, that is, to be embarrassed or shamed publicly. Yelling at somebody in public is another way of causing that person to lose face.

There can be strong repercussions for causing loss of face, with violence an extreme example of what can happen. It’s not uncommon for Thai people, particularly in rural areas, to deal with perceived injustices according to social norms (and outside of legal frameworks), with individuals, families, or communities dishing out punishments as they see fit. 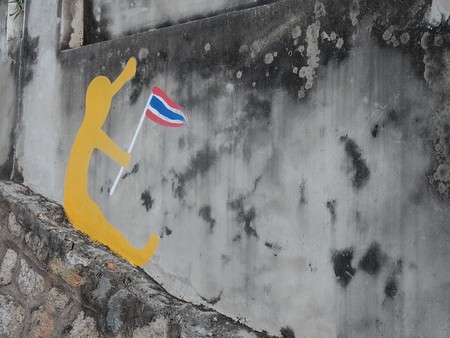 National pride is very much part of the Thai psyche. The country clings to pride that it’s the only nation in Southeast Asia to have never been colonised by European countries. The national anthem is played twice a day, with the expectation that people will stop and stand until the song has finished. The national flag is flown in many places, raised with the national anthem each morning and lowered again in the evening. The King’s anthem is played before movies start in cinemas. Many Thais profess an enduring love for their country, extending to religion and the monarchy. While foreigners are generally welcome in Thailand, they will always be on the fringes, even if only slightly. 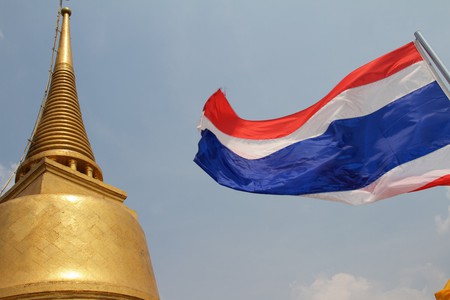 The Thai flag flying at a temple | © Johan Fantenberg / Flickr

Thais rarely display strong negative emotions, with bouts of anger, tantrums, and public crying somewhat unusual. This doesn’t mean they aren’t displayed in private, or that the emotions aren’t there, simply that a person does not want to lose face by showing their feelings in public. Thais are often seen as being super laidback because of this. 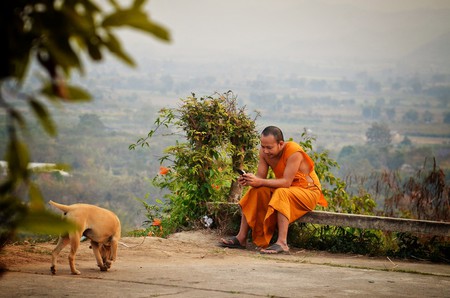 Foreigners sometimes take this as meaning that Thais don’t really get ruffled, take offense, or take things too seriously. Don’t abuse the notion that Thais are a completely carefree group, though, as underneath, they often do care, but have been conditioned to respond in such a way. 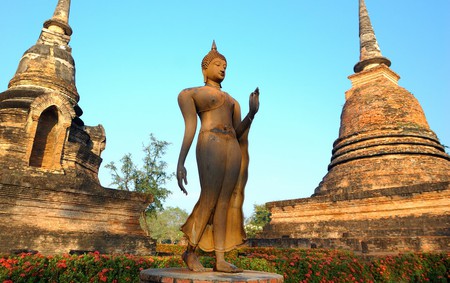 Smiles can have many meanings

Connected to above, many people think Thailand a warm, happy, and welcoming nation because of the constant smiles. Indeed, Thailand is known as being the Land of Smiles! Smiles don’t always show happiness, though, and are sometimes used as a mask. That’s not to detract from the fact that many Thai people are, in fact, kind, welcoming, hospitable, and lovely, but to show that a smile may not be quite what you think it is. 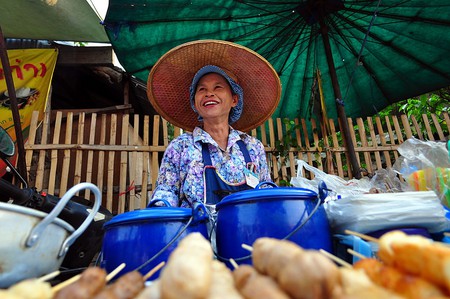 On the rare occasion a Thai person says no outright, it means a firm no. Maybe is a safer, face-saving option, which probably means no, but may mean yes. Yes, however, doesn’t always mean yes. Thai people don’t like letting others down, and will sometimes agree to things even if they don’t want to or have no intention to actually follow through on what they said. Plans are often fluid. It’s also quite rare for a Thai person to say they don’t know something, for example when giving directions. Rather, you may sometimes be told what a person thinks will make you happy at that particular point in time to save disappointing you or being unable to help, rather than thinking ahead about a greater inconvenience or disappointment later down the line. 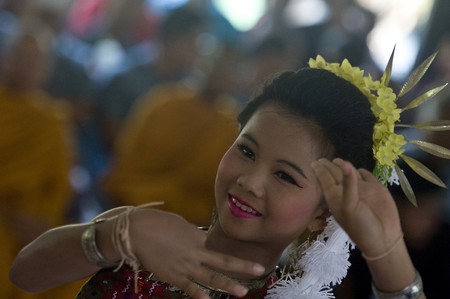 The religion is unique

The predominant religion in Thailand is Buddhism, specifically Theravada Buddhism. The religion practiced in Thailand is somewhat unique to other Buddhist nations, having been infused with many outside elements. Hindu practices and traditional Chinese beliefs have influenced local beliefs to an extent, with animist beliefs playing a large role in making Thai Buddhism what it is today. 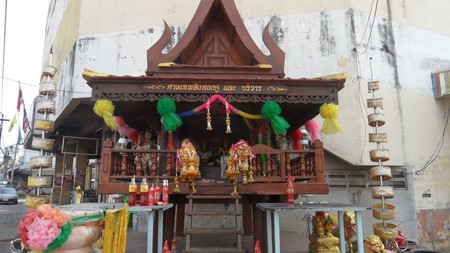 You will see, for example, many Thai people wearing amulets or carrying talismans, despite Buddhism prohibiting attachment to material objects. Belief in ghosts and spirits is strong in Thailand, stemming from traditional pre-Buddhism beliefs, and you’ll notice spirit shrines in all manner of places. 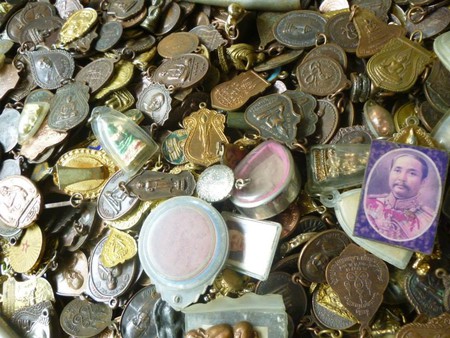 Often connected to the belief of ghosts and spirits, Thailand is a land of superstitions. It is customary for people to consult a fortune teller or monk for an auspicious date before arranging a wedding, buying a home, test driving a car, and other situations.

The tradition of giving newborn babies a nickname originated from a desire to trick malevolent spirits who may want to steal the baby away. Traditionally, people avoided complimenting parents on their new baby too, fearing making the child seem too desirable to the spirits. There are superstitions related to spirits housed inside the body of dolls, not cutting children’s hair if they are sick as a baby, male and female twins, animals, dreams, and more. 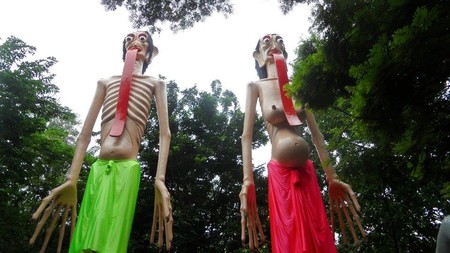 You’re sure to see many monks during your time in Thailand, both inside the temples and outside on the streets, on buses, at festivals, and in a variety of everyday settings. Monks are highly revered and respected in Thai culture and disrespecting a monk is a huge no-no.

There are designated seats on public transport for monks, for example, and people should always give up their seat to a monk if no other is available. Females, especially, should be careful of their actions around monks. As well as not touching a monk or directly handing things to them (females should put any offerings etc. on a monk’s dish rather than into their hands), women shouldn’t sit next to a monk or their belongings. If you act inappropriately around a monk in Thailand you can be sure that regular people around you will quickly point out your errors with disapproval. 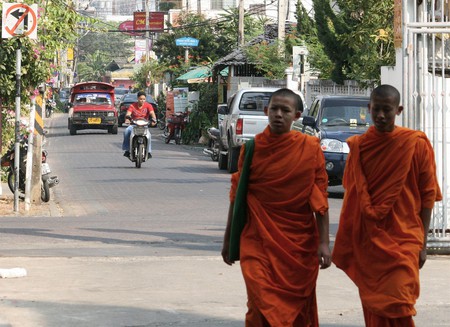 Thais place importance and significance to different parts of the body. The head is seen as the most spiritual part of the body and you should never touch a person’s head … although, most people wouldn’t go around touching strangers’ heads in any case! This goes for children too—an affectionate ruffling of the hair could cause offence to Thai parents. 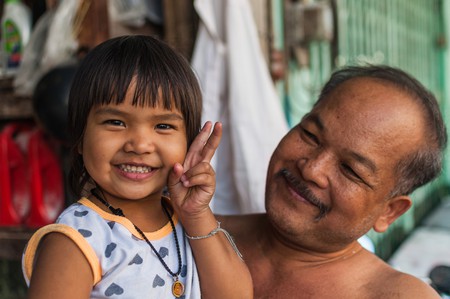 Thais are not overly touchy-feely in general. It’s not so common to see Thais holding hands, hugging, or otherwise touching in public, and kissing and other public displays of affection are a big no.

Although it’s preferable to walk around two people, rather than cutting between them, if you must pass between two people you should stoop slightly so that your head is lower than theirs. It is also polite for Thais to stoop slightly when walking past somebody they know has a higher social status than them.

The feet are seen as dirty and symbolically low. You should never touch somebody with your foot, sit with the sole of your foot pointing outwards, or point your foot at a person or a Buddha image. Even crossing your legs can cause some people to inwardly wince. This means no holding doors open with your feet, pushing your bag along with your feet, or otherwise using your feet in place of your hands. There are many times when you should take off your shoes too. 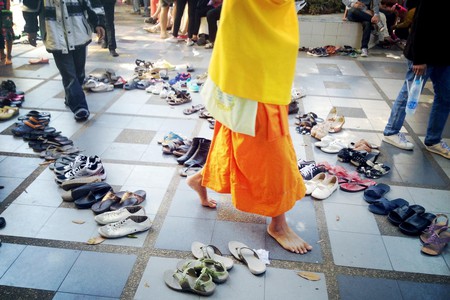 Pointing with a finger is also seen as impolite, as is beckoning somebody with a crooked finger. Thais will often use their lips to point, pushing out the lips to indicate a direction. Alternatively, use the whole hand, with all fingers outstretched, to point. To beckon somebody, the palm should be face down with all fingers extended and the action from the wrist.

Thais are generally very tolerant and understand foreign visitors will sometimes make a faux pas. As long as it’s not something major, like showing disrespect to the religion or monarchy, yelling in public, or walking around semi-naked, many Thais will overlook cultural differences. 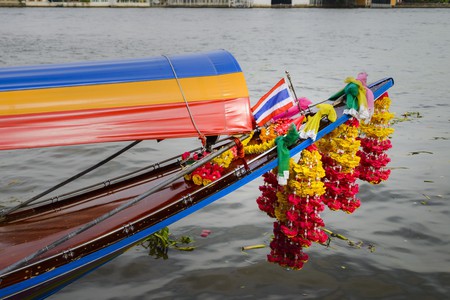