5 Hotels in Macau You'll Be Talking About Forever 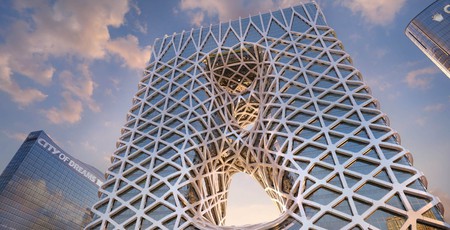 Big, bold and wonderfully over the top, Macau’s hotels are some of the most eye-catching and expensive ever built. Much more than just a place to lay your head, here are five Macau hotels that are destinations within a destination and the talk of the town. 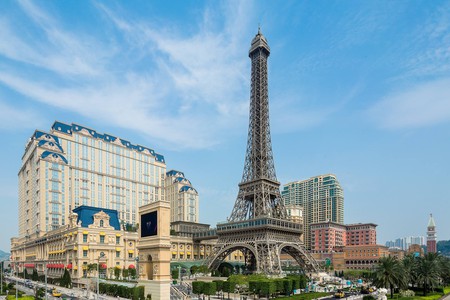 The Parisian Macao is the newest kid on the block when it comes to Macau’s latest spree of multi-billion-dollar new hotels. Having opened last September at a staggering cost of US$2.7 billion, it’s Macau’s own little piece of Paris, complete with a half-scale replica of the iconic Eiffel Tower. The tower features two observation decks, situated on the 37th floor, offering panoramic views looking out over Macau. It’s also home to its own pan-Asian style restaurant, La Chine, located on the 6th floor, which serves up a blend of East and West culinary traditions.

The hotel is styled on the 1850s-1960s golden age of Paris – with its art, culture, and joie de vivre. Alongside the replica Eiffel Tower, you’ll find other tributes to some of Paris’ most famous landmarks, including a hotel reception area inspired by the prestigious Palace of Versailles and a stunning replica of the Fontaine de Mars fountain from the heart of Paris.

The hotel offers approximately 3,000 guest rooms and suites, mostly named after iconic locations in France, and just over one-third of the rooms offer views of the Eiffel Tower – an ideal spot for watching the nightly light show.

Other talking points include The Shoppes at Parisian, a true shopper’s paradise, featuring 150 boutiques and kiosks with the latest in luxury fashion designers, couture, and lifestyle brands all set in a precinct reminiscent of Paris’ famed Champs-Élysées.

Foodies are in for a treat, too, as The Parisian boasts its own classic French-style bistro called The Brasserie and its own signature Chinese restaurant called Lotus Palace, alongside several other French-style sidewalk cafés.

In addition, there’s a 1,200-seat Parisian Theatre, which, integrated into the hotel, hosts music concerts and Broadway-style shows. Outside there’s an expansive pool deck area with a heated swimming pool and Aqua World, complete with a life-size pirate ship designed for kids to enjoy. Meanwhile, a 12-treatment-room luxury spa called Le SPA’tique offers grown-ups a place to unwind. 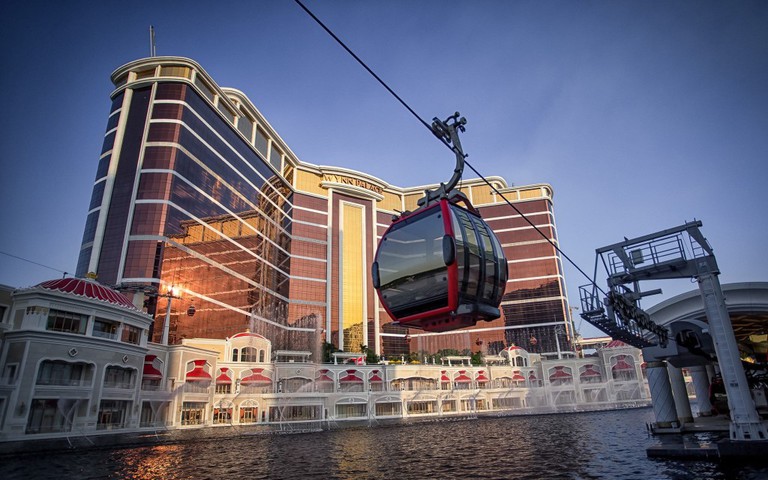 Macau’s very first “palace” opened last August and, at a whopping US$4.2 billion, it’s Macau’s most expensive hotel resort to date. If you’re looking for somewhere fancy to stay – this is it.

An eight-acre performance lake greets you on arrival at Wynn Palace, where a carefully choreographed display combining music, water and light takes place every 15 minutes. Guests can choose to enter the resort via air-conditioned SkyCabs (six guests per cab), which, using an aerial tram system, carry you at a height of 28 metres across the performance lake and into the heart of the resort.

The 28-storey hotel with 1,706 rooms, suites and villas is nothing short of palatial. The floral theme of the hotel is represented in giant floral decorations, such as a 4.8-metre-high carousel containing more than 83,000 flowers and a 6.8-metre Ferris Wheel, containing over 103,000 flowers and weighing more than five metric tons, which is located in the lobby.

Designed to dazzle, the resort has spent over US$100 million on artwork; among its most eye-catching pieces is a striking piece of work titled Tulips, a US$33.7 million, three-ton stainless steel sculpture by artist Jeff Koons.

The hotel offers fine-dining galore as well, in the form of its signature restaurants that cover the gamut of cuisines from Chinese to its own Michelin-starred Japanese restaurants, a steakhouse, and a confectionary offering the best sweet treats around.

Wynn Palace also boasts Macau’s largest spa. At 48,403 square feet, The Spa at Wynn Palace features 22 VIP treatment rooms, each complete with its own private relaxation area, bathtub, and water therapy zone. Among its luxury treatments, the spa offers a $450 facial using gold leaf and crushed diamonds. We told you it was fancy! 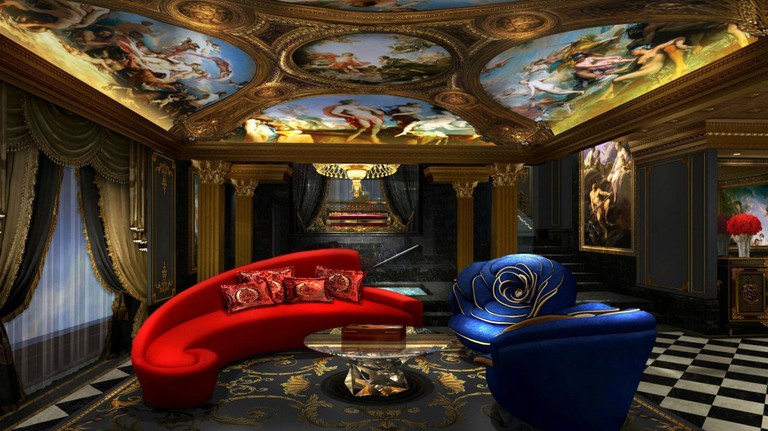 Courtesy of The 13 Macau

This wonderfully OTT hotel, said to be modelled on a 17th-century French palace, is set to open later this year, but has been the talk of the town ever since news emerged that it was being built.

The 13, a US$1.4 billion property, promises a comprehensive “lifestyle experience” for the super rich. It’s believed it will offer guests a six-star luxury experience with its 200 multi-level suites, each with its own 24-hour butler and an elevator opening directly into it.

As a sign of things to come, the hotel’s chairman, Mr. Stephen Hung, has already splashed out an estimated US$20 million on 30 highly bespoke red Rolls-Royce Phantoms to chauffeur guests to and from the hotel. This is the largest single commission in Rolls-Royce’s history.

If that wasn’t enough, approximately US$7 million has been spent on each of the hotel’s 200 multi-level suites starting at 2,000 square feet for an entry-level ‘Villa du Comte’ and topping out at a jaw-dropping 30,000 square feet for the ‘Villa de Stephen.’

Aside from the private elevator and butlers, every Villa du Comte comes as a split-level, one-bedroom villa with its own unique décor, a marble Roman bath that can fit up to six to eight people (and be hidden away when not in use by a retractable marble floor) and an incredible stained-glass and marble bathroom.

The 13 will also be home to the only branch of three-starred Michelin restaurant L’Ambroisie outside of Paris. When it opens in the first quarter of 2017, The 13 hopes to establish a new standard for luxury hotels and will arguably be the world’s most OTT hotel yet. 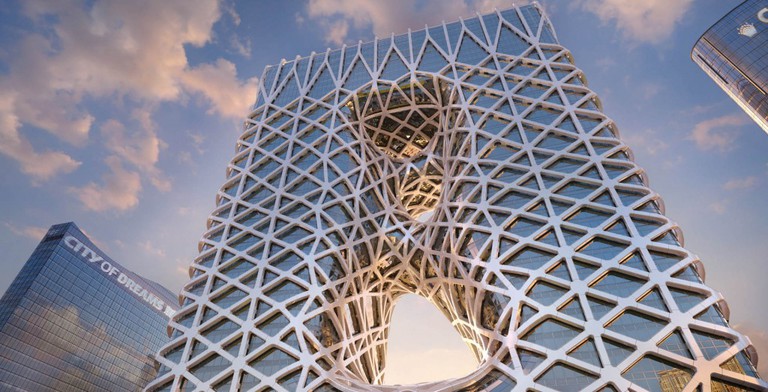 The Morpheus hotel is set to be more than just another luxury hotel, but one of Macau’s most striking and recognisable landmarks when it opens in early 2018. Designed by the late renowned architect, Zaha Hadid, it’s about as visually eye-catching as it gets.

Encased by a striking exoskeleton steel structure – the first in the world built in tower form – the hotel will occupy 150,000 square metres over 40 floors.

Inside will be a 40-metre atrium looking up to the exterior façade that contains panoramic lifts to transport guests.

The hotel will offer 780 rooms, which will be complemented by guest facilities exceeding 5-star hotel standards, including specialty restaurants, an executive lounge, a sky pool and VIP gaming and villas on the top floors.

The developers of Morpheus hope that the new hotel will offer guests an opportunity to experience the future of construction. They hope to buck the tradition of simply re-creating Las Vegas in Macau by bringing it more towards doing interesting and innovative architecture. 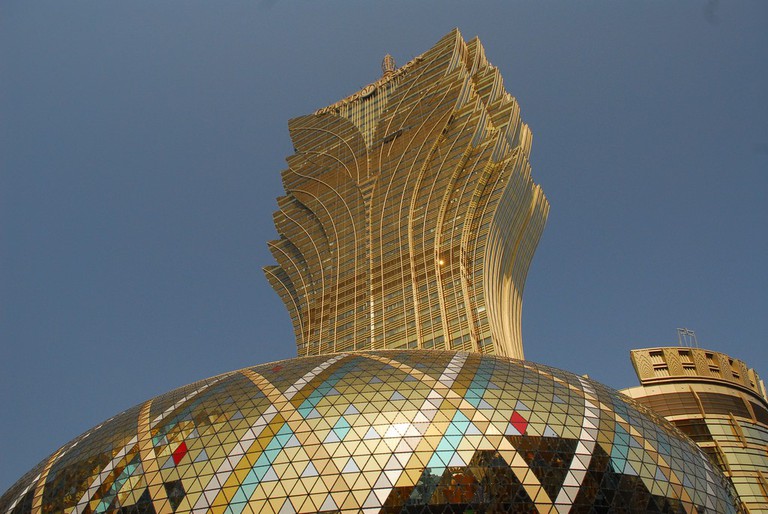 Possibly the most outstanding building visible on Macau’s current skyline, Grand Lisboa, at 856 feet, is virtually impossible to miss as it is Macau’s tallest building.

Awarded in 2011 as one of the world’s 20 most iconic skyscrapers, Grand Lisboa immediately draws your attention as it is shaped like a giant golden lotus flower, the official emblem of Macau. The hotel has a golden egg-shape base, which alludes to good fortune and prosperity. At night, the base of the building is like a kaleidoscope, displaying colourful patterns and visible messages, thanks to the 1.2 million (LEDs) on its surface.

The hotel has been nicknamed “the giant golden pineapple” by locals, as its shape bears a striking resemblance to the fruit. Love it or hate it, the hotel has become an iconic fixture on Macau’s skyline since it first opened in 2008.

In addition to the hotel’s distinctive design, Grand Lisboa offers 430 ultra-luxurious rooms, 12 acclaimed restaurants, including the city’s first fine-dining restaurant, Robuchon (located at the on the 39th floor) and 24-hour entertainment.