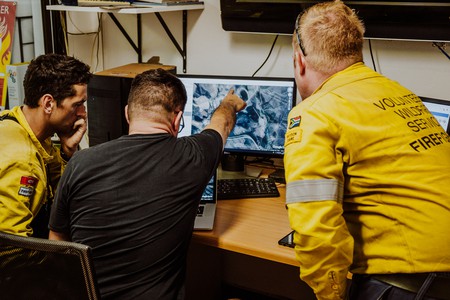 Cape Town’s hot and dry conditions, exacerbated by the city’s ongoing drought, make wildfires extremely prevalent and difficult to control in summer. Thankfully, an established group of volunteer firefighters are on hand throughout the year to keep the city safe.

It’s a warm Sunday morning in late January, the peak of Cape Town’s fire season, and a crew of volunteer firefighters are assembling at their Newlands Forest base. 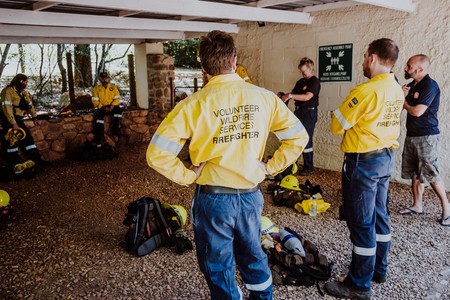 The crew is relaxed – catching up and sharing stories from the weekend, and recent fires fought. A large flat-screen television is showing the weekend’s cricket match. In many ways, it’s not unlike an afternoon at a local sports club. But it’s been a long week of fighting fires for most of them. Fires have been burning in the outlying Overberg region for several days, and the hard work shows in tired faces, and elaborated on in harrowing stories.

“The fire risk for the rest of the day is relatively high,” explains Ryan Heydenrych, one of the two leaders on duty, to a team of volunteer firefighters. 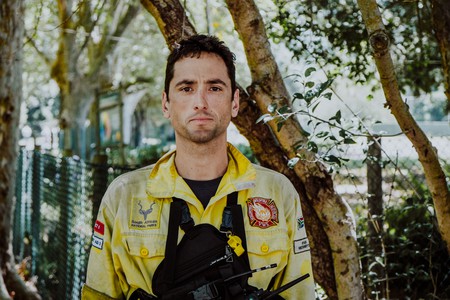 To the outsider, Heydenrych’s briefing seems somewhat dramatic. But it’s something that the team leaders, and crew, take very seriously. And on this occasion, at least, it’s just as well – only a few hours later on that warm summer afternoon in Cape Town, the crew would get the call that a massive blaze had broken out at the base of the city’s most popular mountain – Lion’s Head.

In 2018, there were some 14,500 wildfires tracked across the Western Cape Province; in the previous year there were 17,000. Although these are often in remote wilderness areas, when they encroach on urban areas they can cause destruction – in 2018, 44 people lost their lives in wildfires.

Humans are to blame for many of these fires, but according to Heydenrych, it’s usually not due to arson. “It’s important to stress that many of these ignitions are accidental, with only some suspected or proven as intentional,” he says. “In wilderness areas where lightning occurs, there are many cases of lightning strike wildfires. And rock falls can also cause ignitions, but this is less common.” 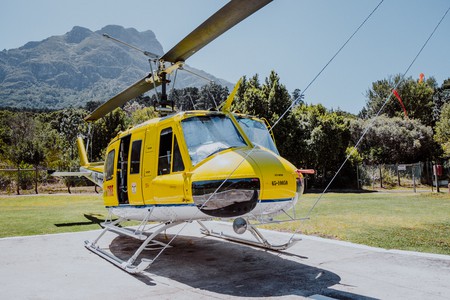 Still, Heydenrych says that residents need to be responsible, particularly on hot and windy days: “Apart from exercising extreme caution on these days, the next best thing they can do is report wildfires immediately and give an accurate account of where the fire is located,” he says, “So that emergency responders can get on scene as soon as possible.”

Like all of the volunteers, Heydenrych receives no pay for his tireless work. This is a side gig that he and others must manage alongside other paying jobs. Often, the volunteers will battle fires throughout the weekend, and return to their desk jobs early on Monday morning with fellow colleagues none the wiser.

Given the proximity of the mountain, and fires, to the city, it’s ironic that some of the Volunteer Wildfire Services (VWS) biggest recruitment periods comes after the most devastating blazes. It was no different for Heydenrych, who joined after a particularly dramatic fire several years back. 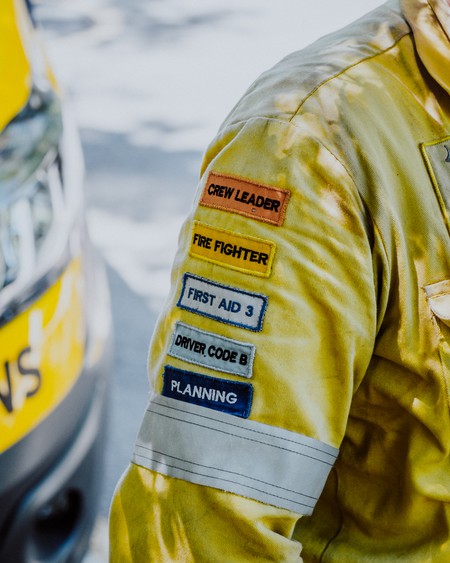 “I used to stay in Devil’s Peak, a suburb bordering Table Mountain,” he says. “I’d often run on the mountain trails above where I was staying. One evening I woke to a smoke-filled home, and a wildfire rapidly bearing down on the area.”

He signed up to join VWS shortly after the fire had subsided, and has remained ever since.

Although there is a large contingent of full-time paid firefighters in South Africa, Heydenrych is part of a small but dedicated crew of men and women. And although many who sign up might initially think of it as a somewhat romantic and heroic endeavour, it’s one that Heydenrych says often takes a toll on personal life.

“It can be difficult to find a balance between personal life and fighting fires, particularly during the busy operational deployments of peak fire season,” he says. “It requires a large commitment of time during the training season.”

It’s also a task that’s strenuous. The stories floating around the base are those of utter exhaustion after many hours on the smouldering frontlines. 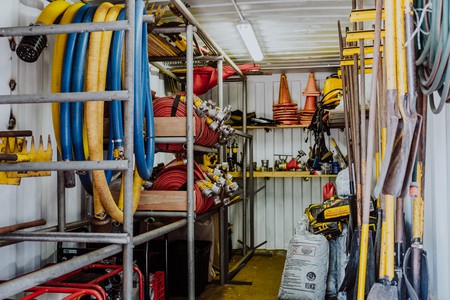 “You need to have the physical and mental toughness to be able to work in this field,” says Heydenrych. “In order to be effective you need to be physically capable of doing the dirty, hard work required of firefighting.”

He’s seen young and fit new recruits come through a training season with flying colours, only to buckle under the intensity of the heat, smoke, terrain, fire and an all-round stressful environment. Many never return to the fire line.

“This is where mental strength comes into play,” Heydenrych says. “Some of our less fit volunteers, but those with life experience and mental toughness, do better compared to someone who is purely strong and fit.”

In wrapping up his briefing for the day’s fire preparedness and risks, Heydenrych runs through some important reminders for the crew. Although a lot of it is common sense – things like what fuels a fire, and how to avoid flare-ups – he’s dedicated to sharing his knowledge in the hope that it spreads to people living in or visiting the city.

“Wildfires are incredibly complex,” he says later. “Even the experts are grappling with understanding all aspects of wildfire behaviour, preparedness and response.”

One aspect that clearly helps is quick response times, and as far as this is concerned, the city of Cape Town, VWS, and various partners have one of the world’s most efficient systems. 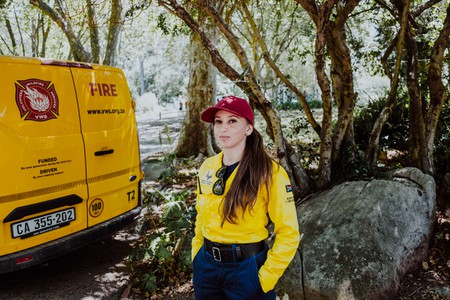 After a wildfire breaks out and is reported, one of the VWS partners notifies them of the need for reinforcements. During high-risk summer months on the weekends, public holidays and other selected days, there are volunteer crews on standby, and they are immediately dispatched.

A lot of the work that VWS does is reducing the risk of a fire flaring back up, or spreading to new stretches of unburned bush. But Heydenrych has, like many volunteer firefighters, seen his fair share of the action, and found himself in several unnerving situations.

In 2015, he helped battle the notorious fires that spread across the Cape peninsula, causing widespread destruction.

He has also helicoptered in to a remote and isolated part of the Warmwaterberg mountains, where a fire line blew up on him and his crew. “We had to retreat to our pre-identified safety zone and hunker down for about six hours,” he says, “Until an inferno and ember storm to beat all ember storms ran out of fuel, and we could safely retreat off the mountain.” 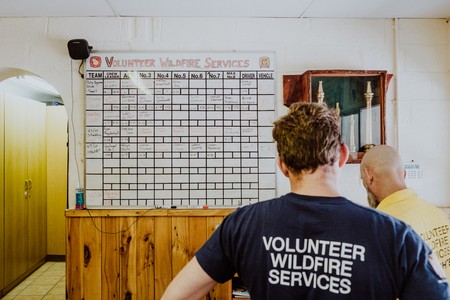 There was no dramatic helicopter lift out of this one, though – after a long day of fighting the fires, the crew had to hike out through rough terrain.

He’s also had the sombre experience of heading to a wildfire in a VWS vehicle, and en-route hearing via the radio communications that a firefighting chopper had gone down.

As difficult as the job can be, there’s no denying that adrenaline and the rewards of their work fuel many firefighters.

“It may sound clichéd,” he says, “but I like a good challenge! Wildfires test both your physical ability and mental toughness. There are so many factors that need to be considered in a short amount of time, and under extreme pressure. There is a lot riding on the decisions you make. Getting this right is extremely rewarding.” 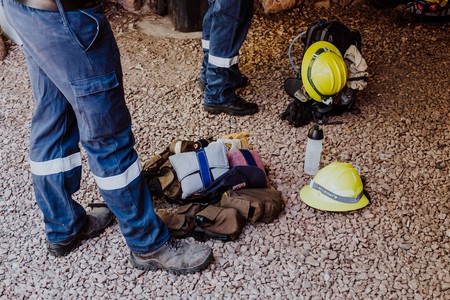 Adrenaline only takes you so far, and at the end of a gruelling shift, Heydenrych says he often has very little energy left to keep pushing on.

“You hit a fatigue level where rest is the only option,” he says. Because of this, the VWS is good about standing crews down after a long shift, and ensuring work-to-rest ratios.

“This being said, there is definitely a strong urge to get the job done and be successful, and it’s hard leaving an active fire line knowing that there is still work to be done.”

These are words that ring particularly true on that summer’s afternoon. Just a few hours later, Heydenrych would be leading the crew he was briefing earlier that day as the first flames whipped the base of Lion’s Head and threatened hundreds of homes nearby. 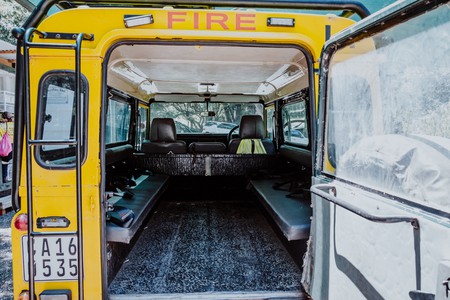 But as residents watched in horror and prepared to evacuate, the crews from VWS did the opposite – they assembled and raced to the fire line.

In spite of the risks, Heydenrych still manages to find the positive in this difficult job. “There are times when you’ve been slogging away at a wildfire in remote areas of the mountains and you succeed,” he says. “You find a rock to sit on, and some clear air to breathe, and you get to truly absorb what you have just achieved.”