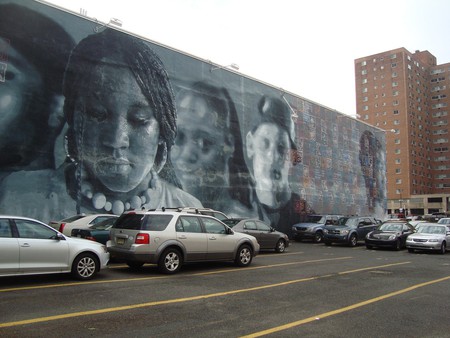 Conrad Benner, a twentysomething from Philly’s Fishtown neighborhood, has put the city’s street art on the map.

When he started his blog, Streets Dept, Conrad Benner wasn’t a graffiti artist, professional photographer or journalist. Benner simply had a camera, a passion for art and a curiosity for the people behind the scenes.

Sometime in 2012, after about a year of running StreetsDept.com, someone commented on my Bio page criticizing me. They said they wish I talked about being gay. I originally rolled my eyes at the comment. Being gay is just one part of a million parts that make me me, I thought. Why do I need to call it out in the bio of my blog about Philly street art?! Nevertheless, the comment stuck with me. Someone recently messaged me and said that they'd been following me for years and didn't know I was gay. I thought about the 2012 comment again… As I've gotten older, I've begun to realize that I can too easily take the work of generations of LGBTQ activists for granted. Those who proudly came/come out as the people they are even when doing so meant/means certain alienation, if not violence or death… I'm so proud to be gay. I'm proud of our history, our strength, and our progress. And the more I think about it, the more I realize I probably would never have even started Streets Dept if I hadn't been gay and grown up with that experience. So that commenter had a point… I'm currently in the midsts of writing an article for the next issue of @caldera.magazine that explores how I think being gay has worked to shape my creative career, and I can't wait to share that with you. In the meantime, Happy Pride Month, y'all! ❤️🏳️‍🌈 (Photo by @doyoushoot with my @togtees collab Trolley Tee, arm scar by taxi breaking my arm on Spring Garden street in 2012! #ProtectedBikeLanesNow)

He started the blog on a free WordPress site and took photos while exploring Philly. Already an avid walker, Benner would find pieces of street art, photograph them and share his work online.

Streets Dept quickly gained a following, as others were interested in the people behind the art too. As it progressed, the content changed from just documentation to a platform to promote local artists, many of whom are fueled by a political or ethical position. Streets Dept helps showcase these messages and their meaning.

Benner told Philadelphia Weekly: “It’s really when I knew that this blog is really more of a collaboration to help showcase the work of these artists and at the same time get educated on their work, how it’s made and its inspiration. I knew that if I found this stuff interesting, there has to be a whole network of people out there who feel the same way I do.”

THANK YOU to everyone that came out to both of my sold out #StreetsDept2ndSat tours this April! Special thanks to @yomitgmb (pictured), @bear_2.1.5, and Pilots Project for talking with my groups… And y’all: Tickets to May’s tour exploring the street art, graffiti, murals – and more! – of The Gayborhood are available NOW at the link in my bio, hope you’ll join me! (Photo by @ericinphilly) 🎨🎉

According to the blog, its primary focus “is documenting and celebrating street art and muralism across Philly’s public spaces.” By featuring collaborations with city officials, activists, political artists and museums, the blog both creates and celebrates a culture.

Got a little sneak preview of the @tinyroomforelephants exhibition tonight (it opens this weekend)… Stay tuned, MUCH more on the blog tomorrow!

Aside from showcasing Philly’s street art scene, Benner is heavily involved in activism. Some of his projects have included the following:

Next Stop: Democracy: A project that worked to increase voter turnout during Philadelphia elections with the help of local artists.

#AmICutOut: A campaign in 2016 that aimed to help end homelessness among Philadelphia’s youth. For this campaign, Benner helped erect a pop-up art installation to raise awareness.

Signs of Solidarity: A public art protest during the Trump inauguration that showed opposition for hate.

Visitors to Streets Dept can find articles showcasing local art exhibitions, the locations of new murals and artist profiles. He announces his street art tours, provides photos of artists working on their pieces and informs his readers about benefits and art-driven missions. The site has a call to artists that encourages them to let him know when they put up a new piece. This helps ensure that the latest artworks are featured on Streets Dept, making it the go-to place to discover new art.

Y’ALL: There’s only a handful of tickets left to my final guided street art walking tour of the season exploring Philadelphia’s #Fishtown neighborhood… Get your tickets now at the link in my bio! ❤️🤗🎉