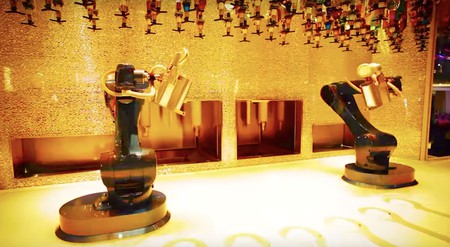 Las Vegas is known for its casinos, nightlife, and for being a bachelor party destination. But in the near future it could be associated with something else – robots.

Earlier this month a new type of bar opened in Vegas. In this establishment, called Tipsy Robot, visitors order their drinks on iPads and sit back as robotic arms mix and serve their drinks. The robots then take 90 seconds or less to put your cocktail together.

When a cocktail is ready, the customer’s name appears on a big screen and they use a QR code sent to their phones to pick it up.

Tipsy Robot claims to be the first land-based bar to feature robotic bartenders. The reason for the land-based qualifier is that Royal Caribbean cruise ships have already used the technology.

The bar will also employ human bartenders, but the news probably won’t be too comforting to those terrified of losing their jobs to machines.

Research published earlier this month by the Institute for Spatial Economic Analysis (ISEA), is hardly likely to improve the moods of doom mongering robo-skeptics either, particularly those based in Vegas.

The study looked into the percentage of jobs that could be automated by the year 2035 in major metropolitan areas in New York. Across the country, 55 percent or more jobs were under threat from automation according to the study, but in Las Vegas, that figure was 65 percent, the highest in the U.S.

“The replacement of jobs by machines has been happening continuously since the Industrial Revolution, but it’s expected to significantly accelerate in the coming 10 or 20 years,” according to Professor Johannes Moenius, founding director of ISEA. “Pretty much everyone will be affected, but some metropolitan areas will see a lot more jobs vanish than others.”

The reason Vegas is so susceptible to automation is that, initially at least, robots will be used to perform lower paying jobs. These include food preparation, serving, and office jobs. These are the types of jobs Vegas has in an abundance.

“Technical feasibility does not imply that automation necessarily makes economic sense. And historically, automation went hand in hand with new job creation both in skilled and less skilled labor,” says Dr. Jess Chen, research fellow at ISEA. “However, the speed and the high share of automation in less skilled jobs raises many questions about whether the economy will be able to make up for the expected job losses. What we do expect is that automation will create winners and losers among cities and regions of the U.S., where losers may not recover to their original employment levels within even a decade’s time.”

“This looks like especially tough times ahead for Vegas and the Inland Empire,” adds Professor Moenius. “But even though there may be a few winners, pretty much every region in the U.S. is going to get a hair-cut.”