The Official Guide to All of Nevada's Ghost Towns 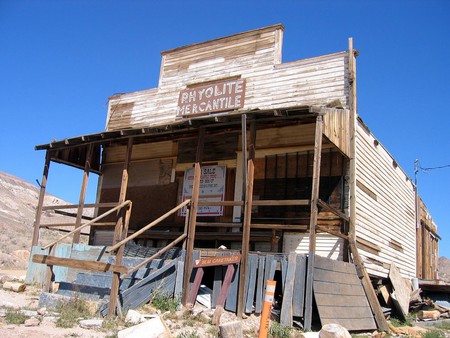 Rhyolite Mercantile, an abandoned general store, burned to the ground in September 2014 after being hit by lightning | © NAParish / Flickr

The boom and bust history of the Silver State left its mark all over the desert—most often in the form of abandoned hotels, crumbling cabins, overgrown equipment and the occasional still-serving saloon.

Ghost towns can be found throughout the southwest, quickly glimpsed along busy highways or stumbled upon at the dead end of less-traveled roads. Nevada was not just a boom town, but a boom state for mining during the late 19th and early 20th centuries, with towns sprouting up all over. But many disappeared within a few decades, leaving only traces of what once was.

The very nature of ghost towns makes them rather impermanent attractions. The stunning “glamour of decay” photo op of 10 or even five years ago can be reduced to dust and rubble by weather and carelessness. Here are some of the sites that can still be seen. 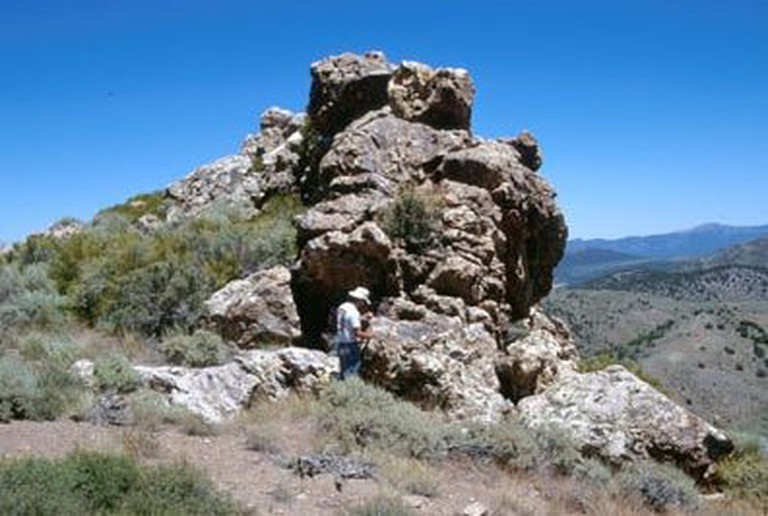 In its heyday, Aurora was truly a “wild west” town. In 1860, a trio of miners staked their claim—four years later it was a town of 18 mills, newspapers, schools and a hotel. Mark Twain’s book Roughing It, is a memoir of the time he spent living and mining in Aurora before he became a full-time professional writer. Unfortunately, Aurora is not as well-preserved as the nearby ghost town of Bodie, but it still offers some intriguing rubble amidst stunning scenery.

Open In Google Maps
Hawthorne, Nevada, 89415, USA
Give us feedback 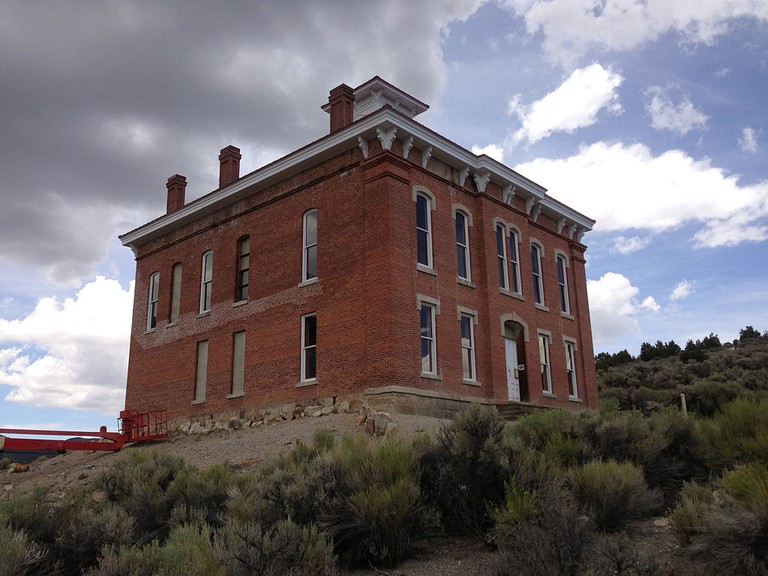 Belmont Courthouse in Belmont, Nevada | © Famartin / Wikicommons
Belmont was established in 1865 after silver, copper and lead were discovered in the area. A decade later, it was a town of 15,000 with restaurants, saloons, newspapers and a post office. Now long abandoned, the town’s courthouse, several mills and a saloon are still standing and several buildings are being renovated.
Open In Google Maps
Tonopah, Nevada, 89049, USA
Visit Facebook page
Give us feedback 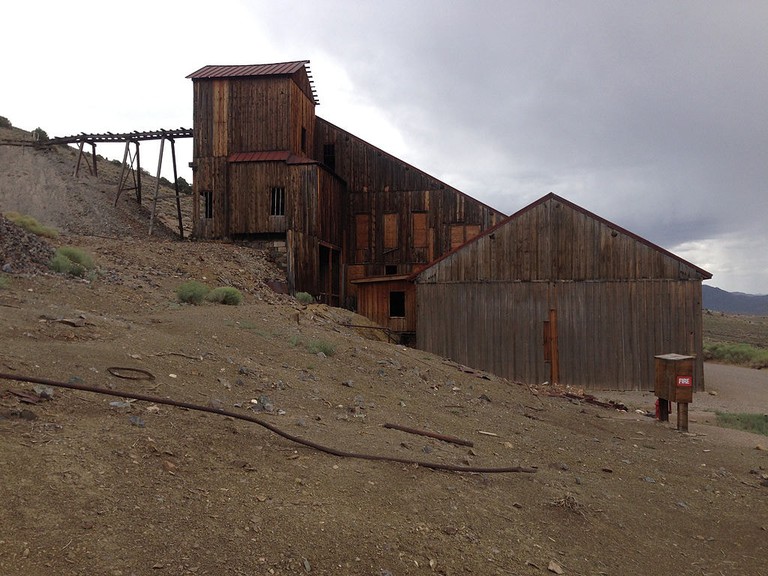 The Berlin-Ichthyosaur State Park contains both the remains of a late 19th century mining town and the world’s largest collection of Ichthyosaur fossils. Its park status means that Berlin is better-preserved than most ghost towns. You can peek in the windows of miner’s cabins at zinc bedsteads and iron skillets, admire rusting machinery overgrown with wildflowers and listen to the wind creak through faded mill boards. Want to go back even further in time? Check out fossils of the Ichthyosaurs, a marine reptile that swam the ocean that covered central Nevada 225 million years ago. 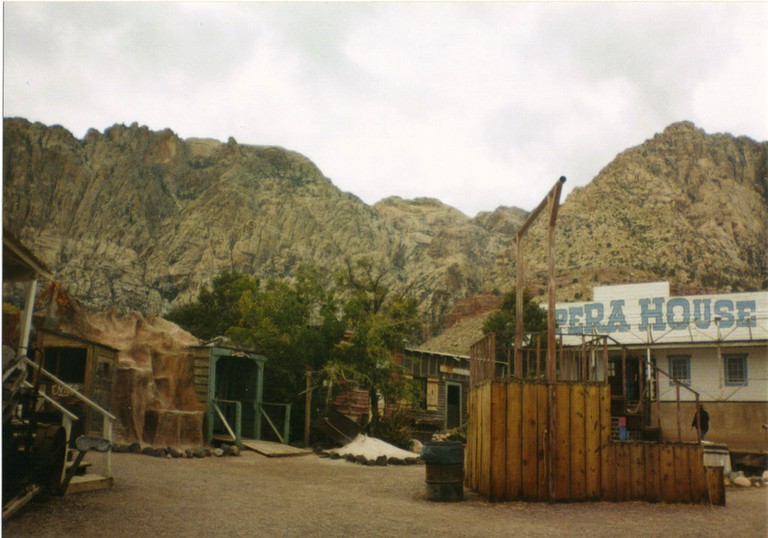 Not exactly a ghost town, but a facsimile of one, Bonnie Springs Ranch has a museum, petting zoo, saloon, motel, chapel and mock western village complete with “cowboys” having “gunfights.” The ranch was opened in 1958 by the eponymous Bonnie McGaugh; in 1974 the “Old Nevada” portion was opened as a replica of an 1880s mining town. The museum features old Nevada relics as well as wax figures, and is rumored to be haunted. 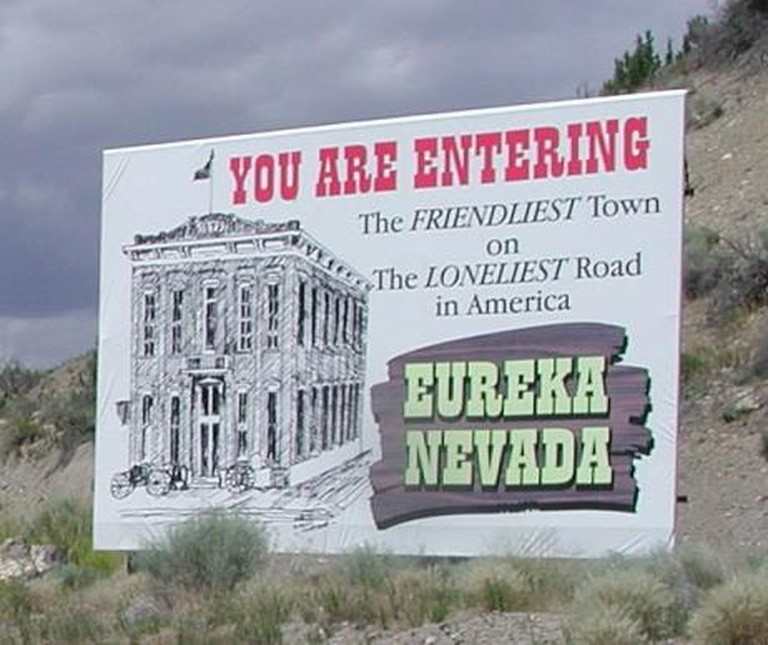 Sign on side of Highway 50 welcoming visitors to Eureka | © Starscream / Wikicommons
Eureka isn’t a ghost town per se, but it is surrounded by the remains of a number of mining camps and the village itself offers much for history buffs. Settled in 1865, shortly after silver was discovered in the area, it grew to become a town of 6,000. Present-day attractions include a beautifully restored 1880s Eureka Opera House as well as the Sentinel Museum, an 1879 building that once housed the Eureka Sentinel Newspaper and now highlights displays of original press equipment along with other relics. The ruins of the Ruby Hill mining town are a short drive away.
Open In Google Maps
Eureka, Nevada, 89316, USA
Give us feedback 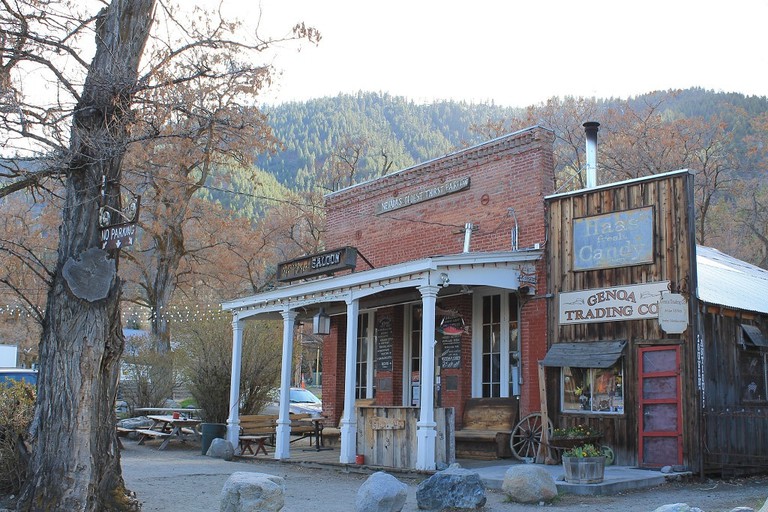 Saloon and store in Genoa, Nevada | © Patrick Nouhallier / Flickr
Located at the base of the Sierra Nevada Range, Genoa is the oldest settlement in Nevada. Among the historic buildings are an old courthouse, mercantile, the (no longer in use) Genoa Jail and the Genoa Bar the oldest saloon in Nevada, which is still serving. The Mormon Station State Historic Park contains the remains of a once busy trading post. A “hanging tree” and old cemetery add ghostly flair.
Open In Google Maps
Genoa, Nevada, USA
Visit Facebook page
Give us feedback 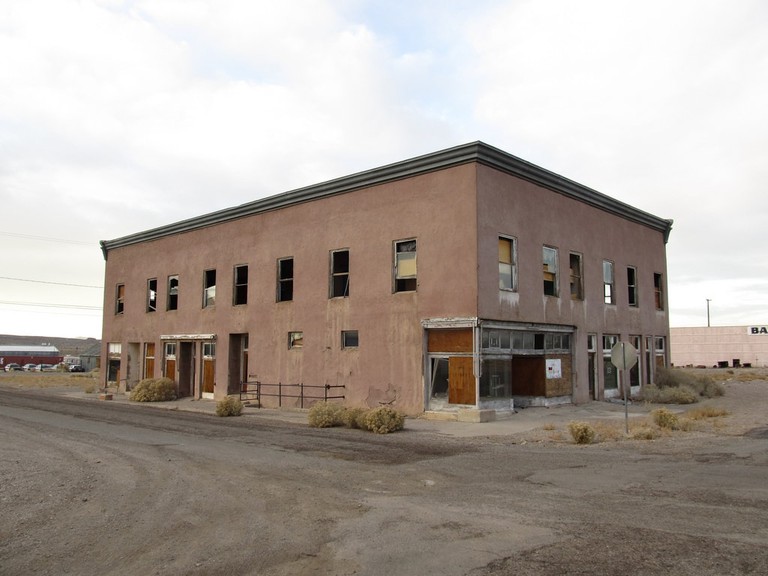 The ghost town of Goldfield | © Ken Lund / Flickr
At the beginning of the 20th century, Goldfield became the state’s largest city due to the success of gold mining. Today, it’s a small community highlighted by a number of historic buildings including the G.L. ‘Rex’ Rickard House and the Goldfield High School. The most famous structure is the Goldfield Hotel—once among the most luxurious hotels of its time, it is now a popular location for paranormal investigations. Other nearby attractions include the Gold Point ghost town and the International Car Forest of the Last Church outdoor art installation.
Open In Google Maps
Goldfield, Nevada, 89013, USA
Give us feedback 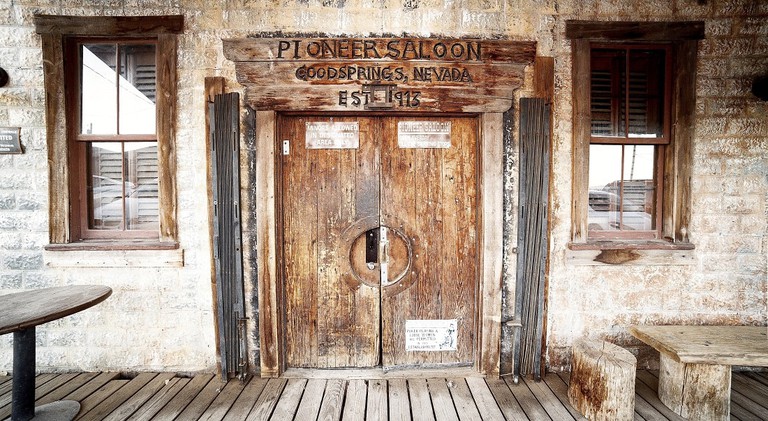 The Pioneer Saloon has been pouring for over 100 years. It’s been the location of gunfights and ghost sightings, movie shoots and video games, many shots and many beers. The bar was built in 1913 and the cast iron stove and the bullet holes in the wall are original—the latter from a cards-related gunfight. The Pioneer was built during the boom days of Goodsprings, when it was a lively mining town with homes, shops, churches and even a hotel. Today, the old schoolhouse and the Pioneer remain and you can still stroll down the block for a look at abandoned miner’s cabins and mine sites, as well as a graveyard dating back to the 1880s. 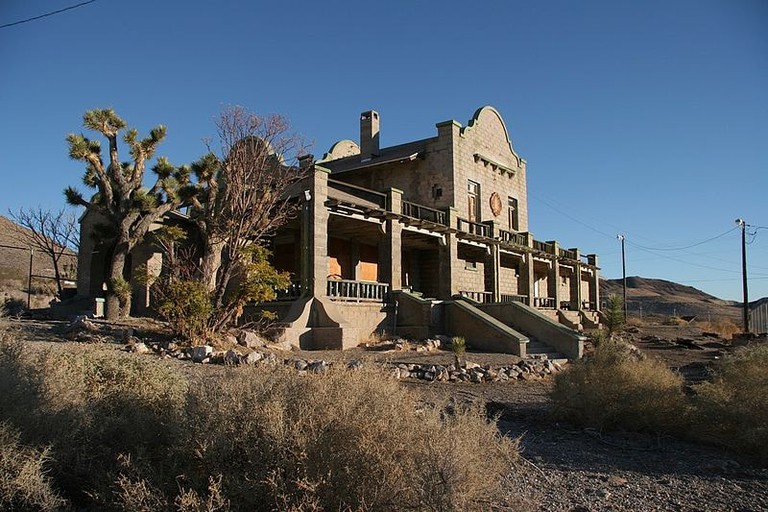 Abandoned train station, Rhyolite, Nevada | © Gedstrom / WikiCommons
The photogenic ghost town of Rhyolite has been featured in films from cult flicks like Cherry 2000 and Six String Samurai to Michael Bay’s 2005 science fiction thriller The Island. Settled in early 1905, at its peak Rhyolite was a bustling community with a hospital, symphony, electric lights and stock exchange. But by 1912, Rhyolite was a post-crash ghost town. Today, ruins of historic structures such as the former Cook Bank building and the town jail are reminders of its former glory.
Open In Google Maps
Rhyolite, Nevada, 89003, USA
Visit Facebook page
Give us feedback 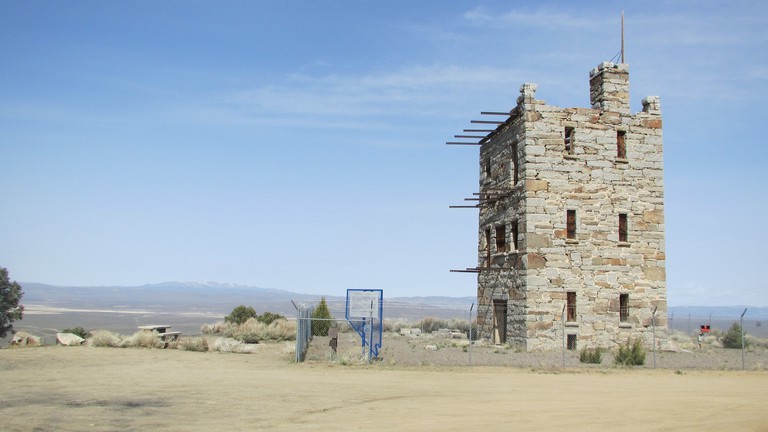 Stokes Castle near Austin, Nevada | © Jeff Moser / Flickr
Founded in 1862, Austin sits on Highway 50, nicknamed “The Loneliest Road in America.” Once a silver mining town, the historic Main Street is lined with shops and restaurants. For those seeking to delve deeper into history, there are other nearby sites. Stokes Castle is a three-story tower that was built by railroad magnate Anson Phelps Stokes as a summer home, while the Toquima Cave Rock Art houses ancient pictographs.
Open In Google Maps
Nevada, 89310, USA
Give us feedback
Give us feedback