In the Nevada desert, there is a secret city that you probably haven’t heard of and won’t be able to see until about 2020. But it’s not a literal city – rather, it’s possibly the largest piece of art created in the past century. City is a labour of love that has taken American artist Michael Heizer over four decades to build and cost him a marriage and his health. As the project nears completion, City has come to embody both mythic status – due to the fact that not many people have actually seen it – and the limits to which an artist will go to achieve the sublime.

150 mi. (241km) north of Las Vegas, deep in the remotest part of the Nevada desert lies City (1972-ongoing). Described as a “desert mega-sculpture,” “ceremonial mounds and abstract forms,” and “a monumental architectonic work”, City is a mile-and-a-half-long sculptural exploration into scale, material, and intellectual rationality. 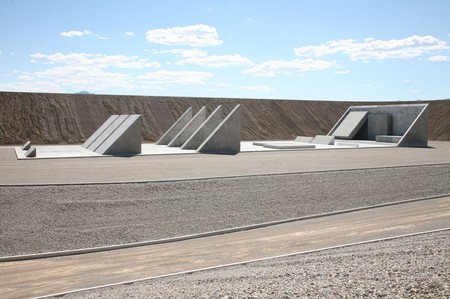 Created directly from the earth on which it sits, as well as concrete, sand, and rocks – the work is a juxtaposition of numerous mounds, jutting forms, and steles, into negative and positive space. “It’s like a handmade object now, erased, redone, adjusted, not just fabricated. It’s part of nature, here for the millennia,” said Heizer, who has been working with the natural landscape since the mid-1960s, making work that needs to be seen to be believed – but, more importantly, experienced. One should walk among it and exist within the spaces it creates, to react to it and to become one with, or indifferent to it. Yet at present, only a few have actually seen City in person.

I recall my first visit to Dia Beacon, in upstate New York, where they have Heizer’s North, East, South, West (1967/2002). Here, is art that doesn’t exist on a surface alone, but that encompasses all aspects of space. In the floor, deep, darkened voids evoke the feeling of looking into an abyss, into the nothing, beyond the third dimension.

Heizer had made an earlier version in the Sierra Nevada and used steel and plywood to clad the surface of the interior spaces he had created in the ground. Digging into and removing matter to create voids has intrigued him since 1967. Working outside the confines of the conventional gallery space had started to preoccupy a group of New York-based artists of the time, and upon meeting Walter De Maria, Robert Smithson, and Nancy Holt, Heizer started taking trips out west to scout locations for work.

His first major permanent piece, Double Negative (1969-1970), took his penchant for excavating to a megalithic level as he cut a mirrored trench into the Virgin River Mesa of Nevada. Ultimately removing 244,000 tons of earth (221 million kilograms), Heizer employed dynamite and bulldozers to form his twin trenches that measure 50 ft. (15m) deep and 1,500 ft. (460m) long – just imagine if you lay the Empire State building down on its side. The work addresses our relationship with the immeasurable immensity of the natural environment, on the measurable scale of urban architecture. It also blurs the boundary between physical and metaphysical experience.

But before Double Negative, there was Munich Depression (1969), a work that existed for about a month on the outskirts of the German city, in which Heizer dug out a 16-foot-deep (5m) circular ditch into which one could descend. It was once inside that the true scope of the work took hold, disorientating both the view and the viewer.

Growing up around archaeological digs with his father, an archaeologist excavating in the Great Basin of California as well as the Yucatan, has evidently impacted Heizer’s relationship to landscape and the creation of art. City has been likened to ancient ceremonial sites like Chichen Itza in Mexico. The sculpture’s aesthetic certainly mimics that of another time, and Heizer refers to the various components as “complexes,” which comes from the archaeological term.

City also seems to have a profound effect on anyone lucky enough to visit, and this is advantageous as the project has come up against multiple roadblocks over the years. Lack of funds, Heizer’s ill health, and the threat of passing all of the nation’s nuclear waste through it have delayed completion of the work. Fortunately, Heizer has garnered support from a number of influential figures, both within the United States Senate and the art world. Michael Govan, a former Dia Art Foundation director who now oversees the Los Angeles County Museum of Art (LACMA), has been a longtime supporter and advocate of Heizer’s vision. “It epitomizes a fusion of ancient and modern forms,” he told Michael Kimmelman of the New York Times. “It’s huge in size, but antimonumental in its relentless horizontality and its sinuous, continuous curves. It’s also unphotographable and impossible to capture in its totality. It has to be experienced in time and space — over time, and distance.”

In 1972, Heizer bought a number of parcels of private Nevada desert with the help of art patron Virginia Dwan. Although remote and ideal for the artist to work without fear of disturbance, the parcels’ close proximity to federal land has proved a problem. Since the 1990s, various lobbying initiatives have been underway to conserve City, and with Govan and Senator Harry Reid of Nevada having Heizer’s back, President Barack Obama signed off on the creation of the Basin and Range National Monument, protecting 800,000 acres (324,000 hectares) of surrounding federal land from oil and mineral prospecting.

Heizer has spent his entire career working with the material of the land. Whether it’s installing a 340-ton boulder (340,000km) from a California quarry into the grounds of LACMA, so visitors can walk under the sculpture (Levitated Mass, 2012), or creating giant line drawings in Jean Dry Lake, Nevada, with motorbike tracks (Circular Surface Planar Displacement Drawing, 1969) – the American landscape, in all its limitless possibility has informed Heizer’s practice.

Heizer creates work that exceeds the constraints of experiencing art within a white-walled gallery. His use of negative space, as in the lack of an existing form, ultimately highlights the existence of something and its potential, though absent impact.

Regardless of Heizer being notoriously reclusive and prickly – he declined to talk to me about City, as he has with many journalists – and vehemently private about the work, those who are aware of and fascinated by City are vastly more numerous than the small group of people who have actually experienced it over the past 45 years.

The type of art that Heizer creates isn’t just about what you see, but what you feel: the pilgrimage and commitment you venture into to see it, and your subsequent response. City is a work that tests the limits of art, investment (both time and monetary), and the divergent perspectives of artist and spectator. Even if Heizer never allows full access to the public, the conceptual work of City has already spilled beyond its physical borders. 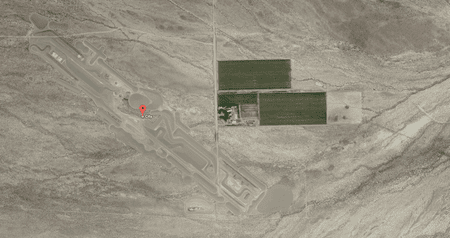