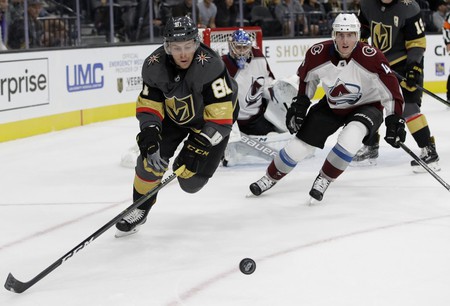 Las Vegas, and most of the United States, is still in shock following the horrific massacre at a country music festival in the city that left 58 dead and more than 500 injured on Oct. 1.

The Las Vegas Golden Knights, the city’s first professional sports team, has been extra busy this week preparing for their National Hockey League (NHL) debut against the Dallas Stars on Friday at American Airlines Arena in Texas, and their home opener on Oct. 10 at T-Mobile Arena. That certainly hasn’t stopped players on the expansion hockey team from making their presence felt in the local community since the attacks.

“Sports are a great thing, it can help take people’s minds off of things,” defenseman Nate Schmidt said. “As much as the city has embraced us, we’re a part of Las Vegas.”

Additionally, the Golden Knights, Foley Family Charitable Trust, and NHL announced on Oct. 3 a joint donation of $300,000 to support the victims of the terrorist attack and the first responders “who have worked fearlessly and tirelessly from the moment tragedy struck.”

Schmidt even wrote a heartfelt letter on ESPN.com about how he and his teammates hope to help Las Vegas heal after the tragic events.

He wrote: “When it comes to the home opener on Oct. 10, it’s going to be a bittersweet night. We will have first responders and people affected by this out with us. We will continue to do that as the year goes on. That will always be a reminder of what this city has gone through.

“Now, there’s a team to go along with it. And it’s an honor to be part of the new fabric sewn onto the quilt that is this city.”

Sports have a uniting factor that is only strengthened after tragedy. The world stopped following the Sept. 11 terrorist attacks. Eventually people went about their normal day-to-day lives and routines with a heavy heart. That included sports. Major League Baseball (MLB) postponed the 2001 World Series between the New York Yankees and Arizona Diamondbacks until it felt people were ready.

The scene during Game 3 at Yankee Stadium on Oct. 30 — the first game to be played following the attacks — was indescribable. President George W. Bush threw out the first pitch. Fans sang along with “The Star-Spangled Banner” as loud as they could. Chants of “U-S-A” rung out of the crowd. Red, white and blue dominated wardrobes, banners and signs.