A Guide To The Culture Of Burning Man

Much more than an annual festival, Burning Man is a way of life. The event takes place every year on the week leading up to and including Labor Day weekend, where over 60,000 attendees participate in an experimental community. Burning Man is characterized by its Nevada desert location, creative freedom and spontaneous sense of community. 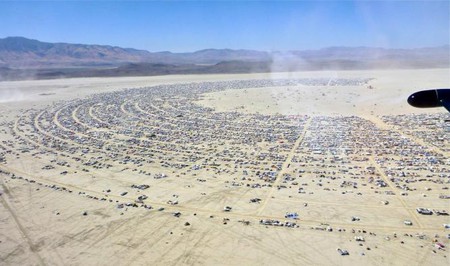 The Ashes of History

The first Burning Man was constructed in 1986 on San Francisco’s Baker Beach at the modest height of eight feet, destined to be burned in celebration of the summer solstice. The Burning Man grew every consecutive year by ten feet for the next three years, eventually reaching the height of 40 feet. After an encounter with the police, in 1990 the Burning Man was relocated and rescheduled to its current date and time: Labor Day Weekend in Western Nevada’s Black Rock Desert. The relocation of the Burning Man to the Nevada desert signaled the inception of two enduring principles of the event. The organizers published a guide to survival in the desert, and also ensured no trace of the event would be left behind. The following decade saw the festival’s steady growth to over 25,400 participants, the creation of a system to organize camp sites, an explosion of theme art, costumes and large scale installations. Following its initial blueprint of participant volunteerism and environmental sustainability, Burning Man successfully grew its infrastructure to accommodate ever more attendees and art functions while complying with the Bureau of Land Management’s stringent ‘camp site’ regulations. Burning Man came into its own as Black Rock City, a temporary community convened once annually. In the process, the event would transcend the temporal and spatial bounds of Labor Day weekend to become a culture and an ethos.

Burning Man’s charter is its mission statement and list of ten principles. The mission statement extends beyond the realization of the event and onto the goal of fostering a community borne out of the event’s culture. Burning Man’s ten principles, meanwhile, itemize the most important aspects of the event and its underpinning ethos: radical inclusion, gifting, de-commodification, radical self-reliance, radical self-expression, communal effort, civic responsibility, leaving no trace, participation. These tenets offer guidance as much for the event as for the lifestyles of its participants. Underscoring the accessibility of the event to all, the unconditionality of giving and participating in the community, responsibility for the environment and for oneself, independence from commodities and social barriers, Burning Man is a performative utopian manifesto. The guiding principle of immediacy is aptly expressed in the mission statement as a call to embrace ‘experience before theory, moral relationships before politics, survival before services, roles before jobs, embodied ritual before symbolism, work before vested interest, participant support before sponsorship’. Most importantly, Burning Man is conceived as a self-supporting enterprise aimed at sustaining the event, its participants and its principles.

So what actually happens at Burning Man? Unlike many festivals where attendees are inserted as spectators before a stage, where participants are made into customers and passive consumers, Burning Man’s attendees are the primary contributors to the event. Participants bring all that they need to survive in the desert and more: costumes, cars, installations and their own micro-communities or camps. While many of the installations and activities are realized solely on the initiative of attendees, Burning Man ticket revenues are allocated in part to support a select roster of projects, and beginning in 2014 the Black Rock Arts Foundation directs contributions to help finance projects which would otherwise be impossible. Projects range in scale from a crowd-funded cucumber stand from Istanbul – evocative of Burning Man 2014’s caravansaray theme – to a seven-floor-high wooden sculpture of two human figures intertwined in an embrace. While some installations offer shelter and refreshment from the harsh desert climate, others verge towards rides at an otherworldly amusement park: a colony of swing sets synced with the sound of bells, turning swing-riders into a musical chorus, or a cluster of LED lotus flowers which reproduce the heartbeats of passersby in pulses of light.
Artistic expression at Burning Man is not just limited to installations, but prevalent at the festival’s individual and micro-communal levels. A cornerstone of Burning Man’s interactive nature is its system of theme camps. While totally inclusive, theme camps set themselves apart from each other by creating unique ambiances and visual presences while joining together participants around a communal space or activity. Hundreds of camps offer different themes and communities, centered around music, drink, food or anything else, from alternative energy and free love to Atlantis and the octopus garden. Mobility is also an important part of playa culture, and many attendees partake in the tradition of decked-out vehicles. Likewise, cyclists roam the festival grounds freely, rolling over the flat desert surface like a highway stretching in all directions.
In recent years, Burning Man has become more and more enmeshed with Silicon Valley and San Francisco’s tech elite. CEOs of companies like Google and Facebook are well-known attendees. While such big business names might seem antithetical to Burning Man’s anti-materialistic ethos, tech entrepreneurs are actually fueling some of the more sophisticated projects at Burning Man. In 2014, techies have prepared a four-floor-high zeppelin made of colorful lights and a lightning-spewing dome powered by a ten-foot-tall Tesla coil plugged into a DJ booth. Other controversial attendees have notably included anti-taxation libertarians like Grover Norquist. His statement via Twitter to attend sparked an outcry from many Burning Man attendees who oppose his politics, yet others have argued thoughtfully that Burning Man’s radically inclusive mandate cannot be withheld from any attendee.
Despite Burning Man’s evolution from a small and intimate community to a veritable city of tens of thousands, the event’s mission statement and principles have paved the way for ever-expanding modes of inclusion and a sophisticated gift economy. Likewise, Burning Man places first-hand experience before second-hand sources – so stop reading about it and go.