Raising The Roof: A Bird's-Eye View of Things to Do in Chicago, Illinois 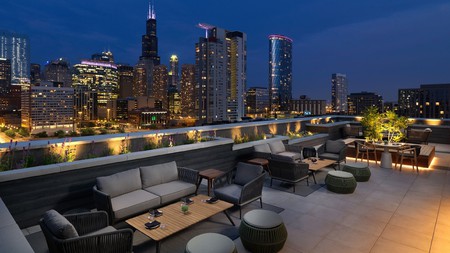 Enjoy delicious food and skyline views at the rooftop restaurant at the Nobu Hotel in Chicago | Courtesy of Nobu Hotel Chicago / Expedia.com

Summer spots with views of Lake Michigan and sky-high places for late-night libations line up in this Illinois city.

Chicago has always marched to its own beat and the Second City is second to none when it comes to rooftop revelry. Although the summers are short, the nights are long as many of the hotels, restaurants and hotspots turn their open-air rooftops into cozy centers for cocktails, cuisine and conversation, whatever the season. So, head up to see this architecturally arresting city from above and get a soaring snapshot from these rooftop haunts. 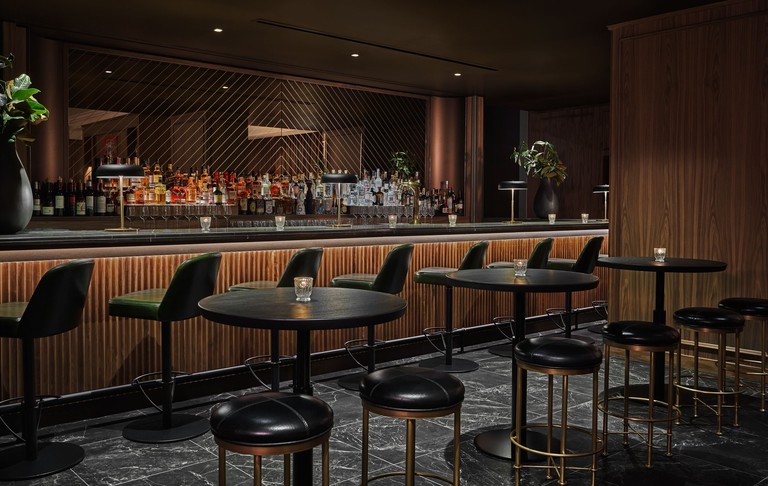 Courtesy of Pendry Hotel / Expedia.com
Modern luxury and an address amid the vibrant restaurants, shops and theaters around the Loop allows the Pendry to capture Chicago’s spirit. With sweeping city views and a distinguished bar with digestifs for the discerning drinker, Pendry delivers an experience that showcases Chicago in a new light. For the best views in the warmer months, head up to Cote D’Azur-like rooftop restaurant Château Carbide, where the light, airy feel is as intoxicating as the champagne selection. 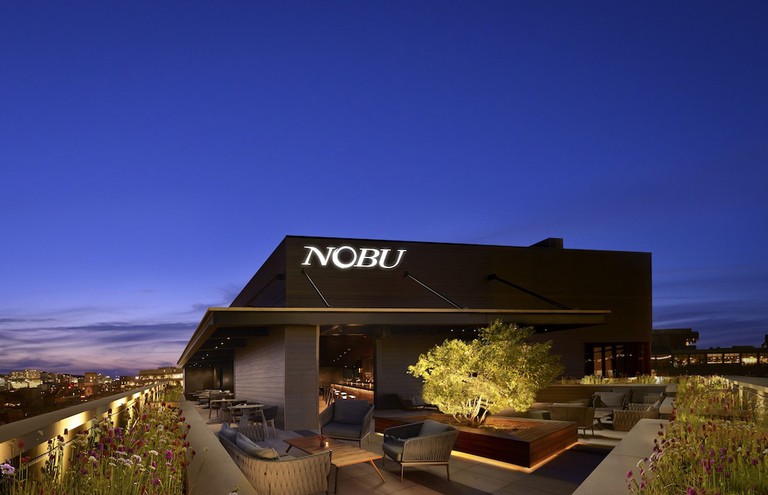 Courtesy of Nobu Hotel / Expedia.com
View Rooms
Price Drop
Now from $208 per night
A true taste of Chicago involves deep-dish pizza and Italian beef, but those with a refined palate know all too well that an opportunity to dine at Nobu should never be missed. Head up to the rooftop of Nobu Hotel for an elevated dining experience found nowhere else in the Midwest. Whitefish tiradito, based on the Peruvian ceviche-like dish, mini wagyu tacos and lamb anticucho (street-food-style Andean skewers) are just a few of the delicious plates you’ll plow through en route to a chocolate sobacha cake. The extensive wine selection lets you refill a whim while drinking in the rooftop atmosphere.
More info 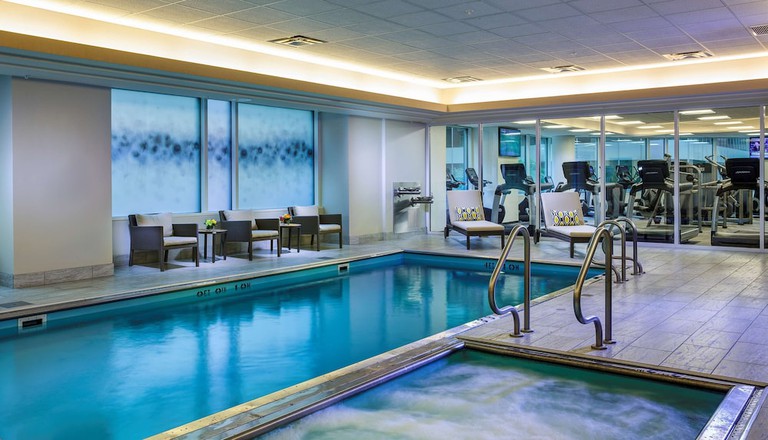 Courtesy of Hyatt Centric The Loop Chicago / Expedia.com
View Rooms
Price Drop
Now from $136 per night
Nobu rarely leaves room in your stomach but if you’re game for a nightcap, ARIE has a shaker at the ready. A chic, playful vibe blows through the rooftop of Hyatt Centric, allowing you to appreciate the amazing city views without taking this breathtaking backdrop too seriously. The chill and chatty crowd will convince you to stay until last call and one too many of their Second City cocktails may sway you to follow your new friends to other rooftop haunts around the Loop.
More info 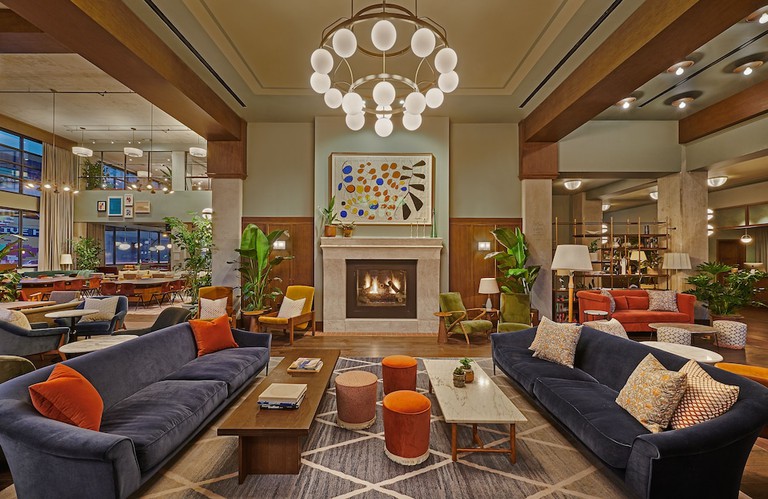 Courtesy of The Hoxton / Expedia
View Rooms
Price Drop
Now from $139 per night
It’s a refreshingly odd feeling sitting on the rooftop of the Hoxton: you’re planted deep within the heart of the city in the Fulton Market district and yet feel a million miles away from the rush of the streets below. Maybe it’s the floor-to-ceiling windows in your room that set a slow pace or the chill vibes on the sundeck that keep you cool at the pool. Whichever it is, as you munch on crab causa, goat empanadas and other Peruvian-inspired bites at the Cabra Cevicheria, you’ll feel delightfully content at this rooftop roost.
More info 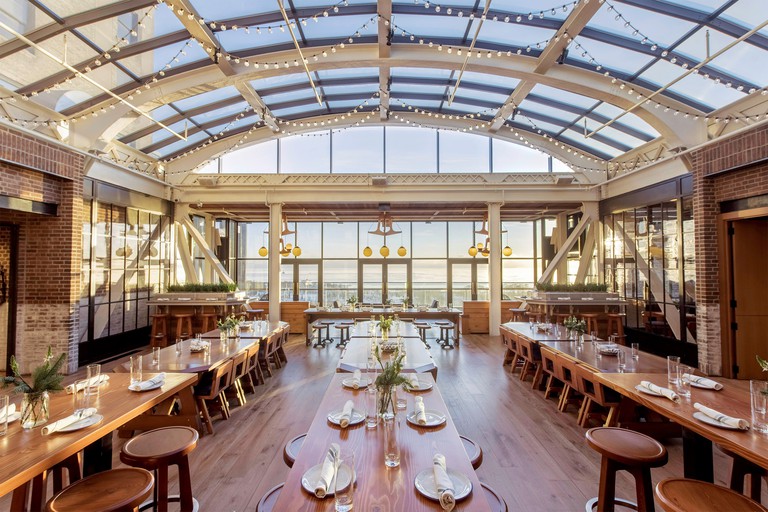 © Nick Gerber
Far be it for us to encourage bad behavior, but it’s about time you let your hair down at Cindy’s Rooftop. Overlooking Millennium Park atop the Chicago Athletic Association, you’ll need advance reservations to get a table, but pre-planning is worth the work. Between the fresh oysters, award-winning cocktails, view of Lake Michigan and sights of the city skyline, you’re going to drain your battery posting unbelievable photos. 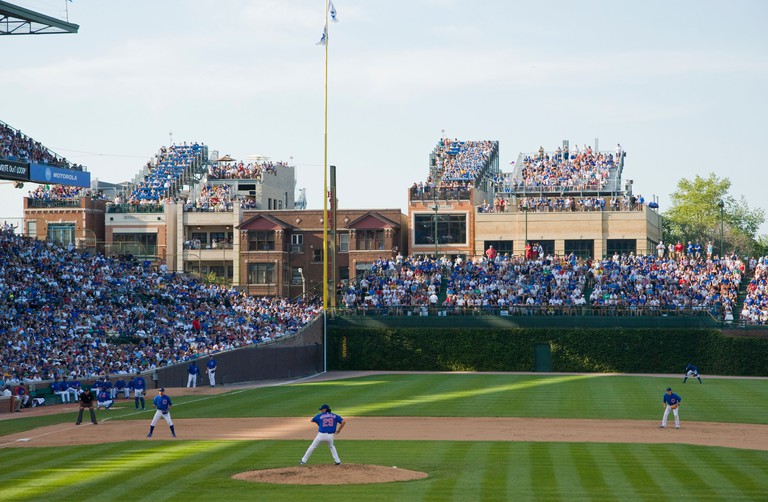 © Chuck Eckert / Alamy Stock Photo
Heads up, sports fans: the best way to see the Cubbies in action is from the Wrigley View Rooftop. This game-changing experience hits a home run, whether you’re catching nine innings or a late-night concert, you’ll have a full view of the field and a full buffet to keep you going. You’ll need a group to rent out this space, but trust us: it’s the ultimate outing for those who love the Windy City, America’s favorite pastime and an all-round unforgettable experience. 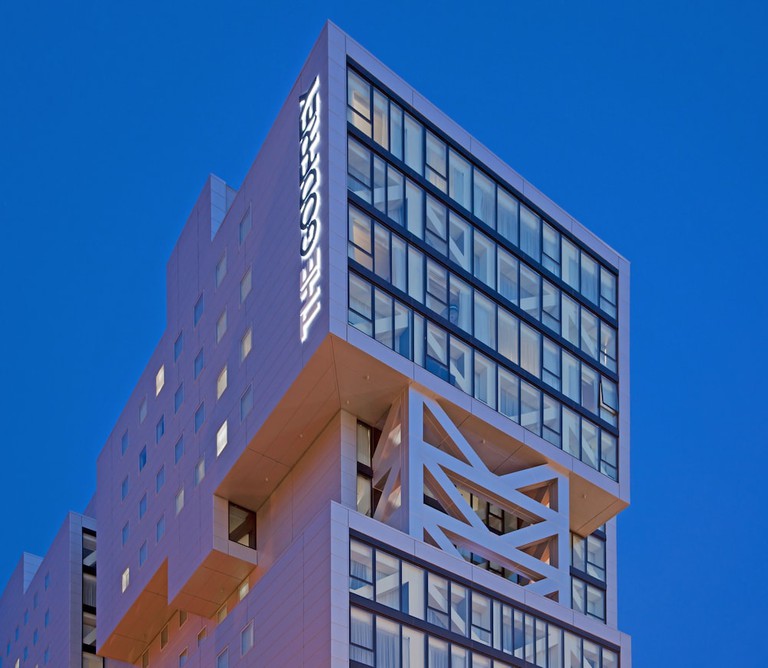 Courtesy of The Godfrey Hotel Chicago / Expedia.com
View Rooms
Price Drop
Now from $118 per night
You’ll feel in your element the moment you check into the Godfrey. Chic guest rooms have both wet bars and workstations, allowing you to work and play during your stay. Its prime location is ideal for knocking off the tourist trail: the Gold Coast, Navy Pier and Riverwalk are all within a few Subway stops. Head up to the I|O Rooftop Lounge to scan the skyline and snack on a dangerously decadent s’mores martini made with rum, cold-brew coffee and the signature sweets.
More info

Bar, Beer
Facebook
Email
Twitter
Pinterest
Copy link
Share
Map View
You’ll have to head almost down to Chinatown to reach Reggie’s, but the extra Subway stops are worth it. This no-frills bar has live local music, tons of pub grub and a beer list that pleases its mixed crowd. It’s way too easy to spend hours on the rooftop here, knocking back a few pints. If you happen to be in town for a concert or a sporting event, let the free shuttle bus be your designated driver so you can indulge safely. 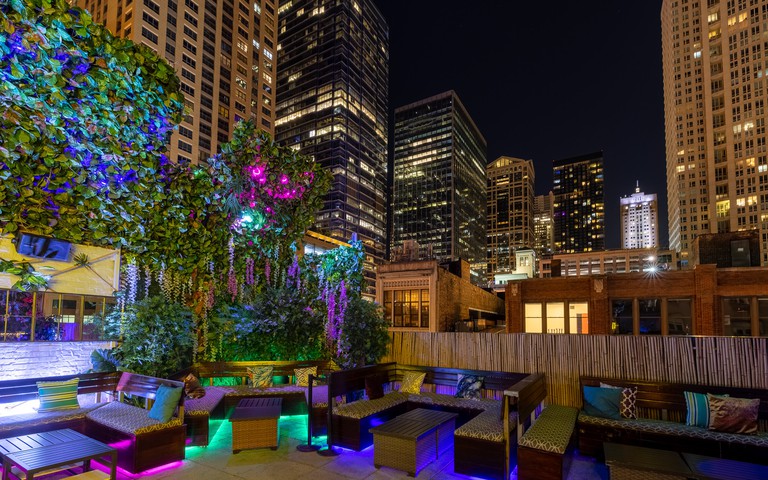 © Joy District
Before your Windy City holiday blows you back home, spend a last night out at one of the hottest rooftop bars in Chicago: Joy District. This River North rooftop is an all-season affair, keeping the party going even when it’s snowing. As you head to the roof, you may get sidetracked and follow a celebrity like Travis Scott or Demi Lovato into the second-floor dance club. Take your time and shake the night away. The rooftop will be waiting with late-night libations when you’re ready to rest your feet.
Give us feedback