Ek Balam | © Hengist Decius / Flickr
Playa del Carmen gathers the best fun and culture of the Mexican Caribbean. Its privileged location makes it possible to visit archaeological sites that are close to the fun and beauty of vibrant sinkholes, beaches and theme parks. We prepared a list of the archaeological tours you can take from this magical city, and the thrilling activities to do around them.

Everybody knows Chichén Itzá, but few tourists know Cobá. Due to its remote location, it’s not so visited, but if you’re staying many days or you are a history lover who likes the charm of non-touristy places, this is the spot for you. Cobá means ‘Water with moss’, and was an especially important Mayan metropolis, located 90 km east of Chichén Itzá, of which it was a rival. Tours also offer a visit to a Mayan village for a close encounter with their culture. 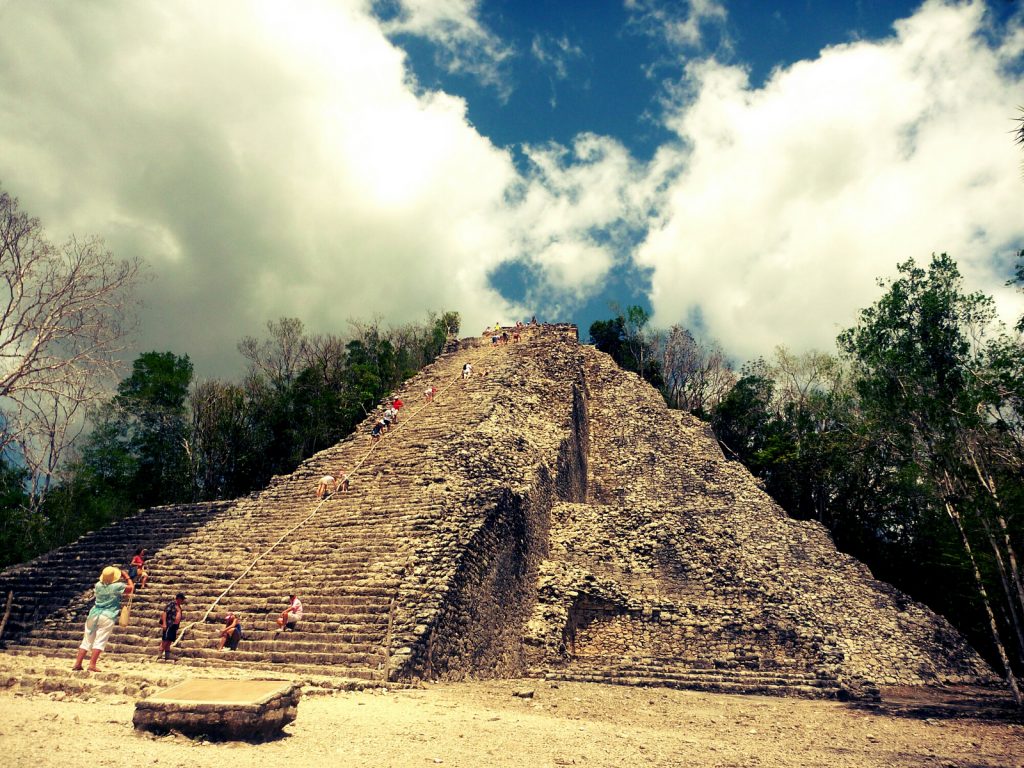 Tulúm, declared a World Heritage Site by UNESCO, was a lighthouse and an important center of worship for the descending god, built under the concept of the four cardinal points. Visiting this archaeological site lets you enjoy the mystics of the Mayan culture without missing a day on the beach. Located on a cliff, the ruins face one of the most stunning beach destinations of the Mayan Riviera: Playa Paraíso. So, after visiting this important Mayan site, go downstairs to the beach, check out the ‘iguanas’ walking free between the tourists and refresh yourself in the most dazzling crystal waters of the Mexican Caribbean. 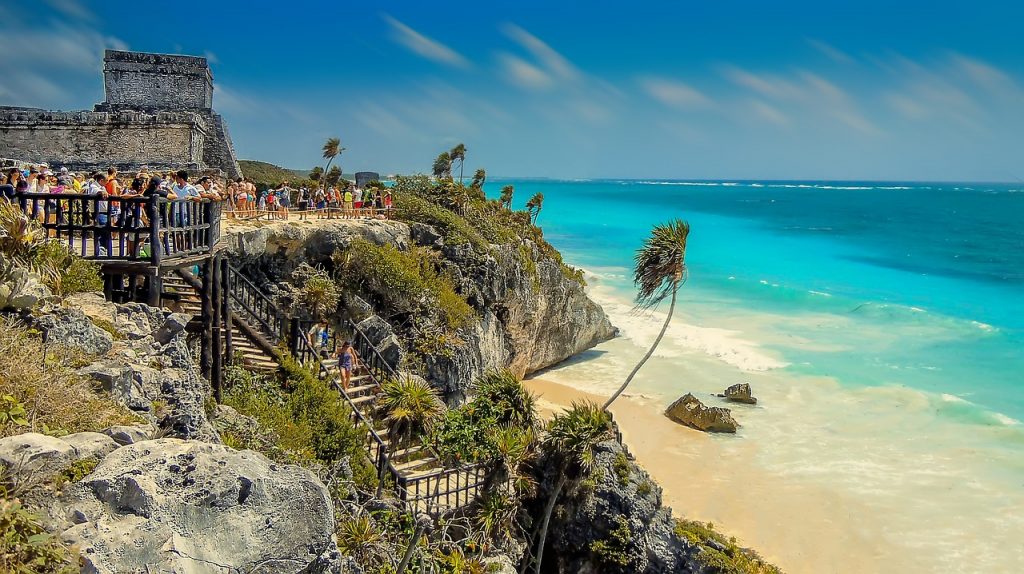 Not that far from downtown Playa, is located the archaeological site Xelhá, close to the park that bears its name. The ruins were the biggest and most important harbor with beautiful palaces decorated with rock paintings during the 250-600 century of our era. Although the walls of Xel-Há used to defend the harbor from maritime attacks, after the arrival of the Spaniards it was almost abandoned. Some of its inhabitants died because of the new diseases brought, and some others fled from the Spanish dominance. Beware not to confuse the site with the theme park. You can take a tour or go on your own, in which case you have to take a van, tell the driver you are going down in the ruins of Xel-Há, and he’ll tell you when you get there.

This is the only official archaeological site in Cozumel. Although not as big as other popular ruins, it’s worth a visit, as it was the sanctuary of Ixchel, Goddess of fertility and love. Something that gives a special touch to this place is the fact it’s totally surrounded by jungle. You’ll feel connected with the atmosphere of the place; there are butterflies, iguanas and vamps in complete freedom. San Gervasio is a small beautiful place with a lot of history. The site comes with a certified guide, there are bathrooms, snack bars, souvenir stores and free parking. Just take a ferry in Playa del Carmen’s pier and enjoy your way to the island. It’s advisable to put on some mosquito repellent. 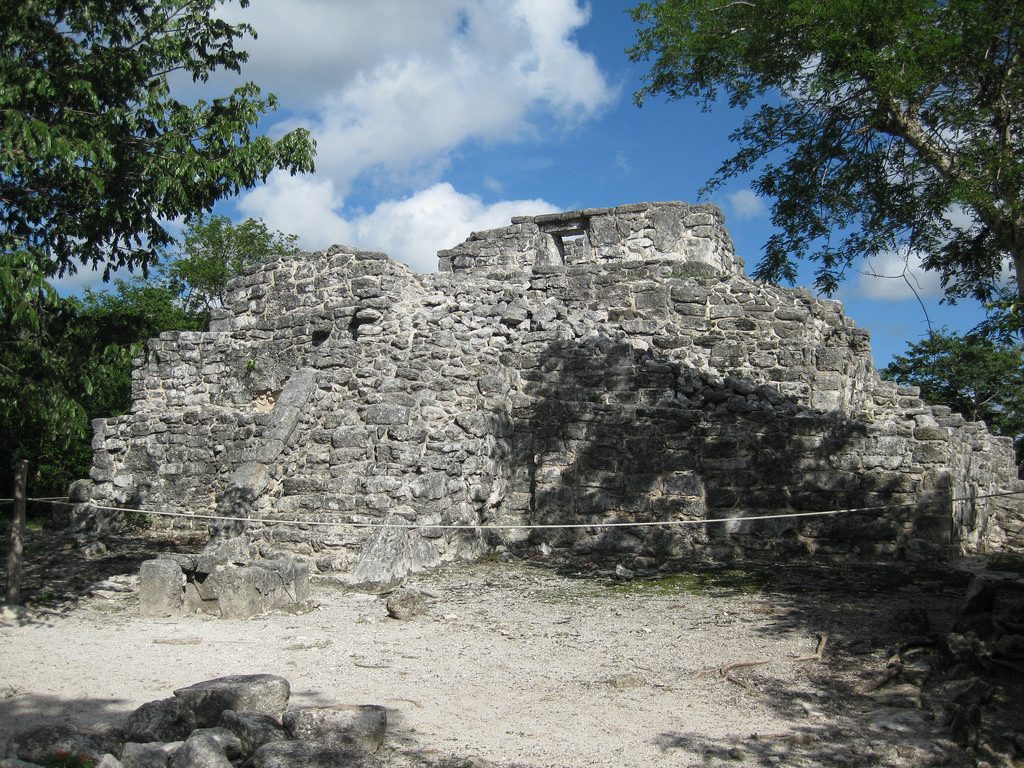 Xcaret was an important city called Polé, which means ‘merchant’, due to its main activity. The place consists of four zones with buildings dating from the XVI century, the pre-classic time, close to the arrival of the Spaniards. To get there, take a bus to Xcaret Park in Playa del Carmen and once arrived, go to the INAH (National Institute of Anthropology and History) offices. The cost is reasonable and includes a guided tour. It’s a good idea to visit the ruins first and then swim in the fresh crystal waters of the Xcaret Park. 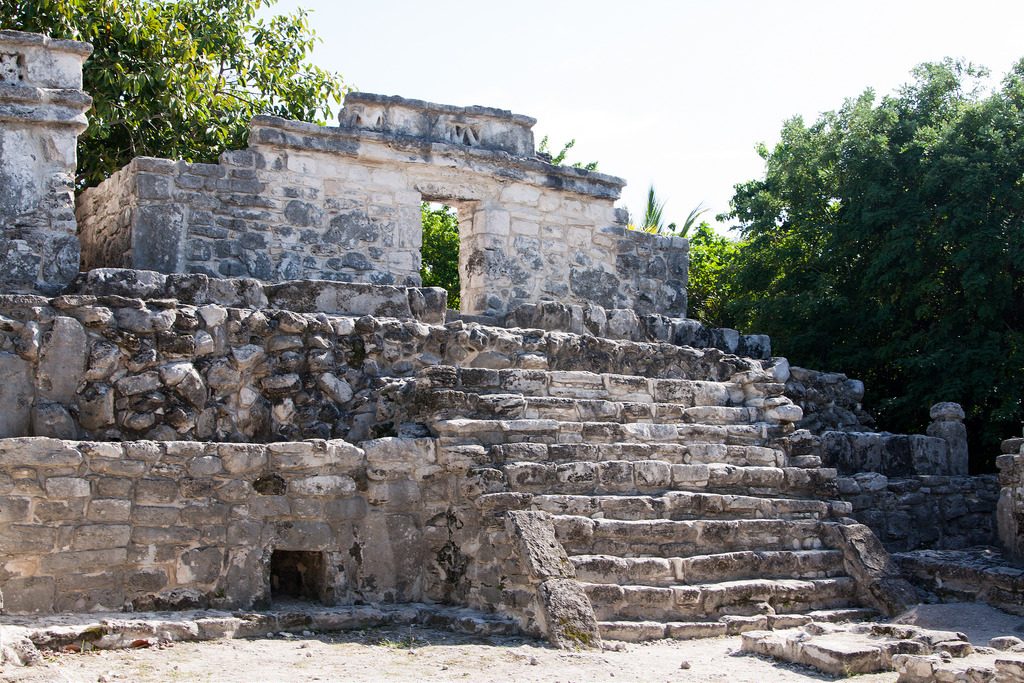 Archaeological site
Chichén Itzá | © Jarmoluk / Pixabay
Book Now
This is the most outstanding Mayan Capital, which used to be a worship and pilgrimage Mayan center. Nowadays it is considered a cultural heritage in Mexico and was declared a World Heritage Site by UNESCO. Discover the diverse temples, courts for ball games, places of sacrifice and sites of merchants or warriors. There are many tours to Chichén Itzá, we recommend you do the ’Lights and Sound Show’, a night tour in which dazzling images are projected while you listen to narrations about the history and secrets of this enigmatic city. We also recommend you see the Mexican spring equinox, there’s a natural spectacle of light and shadows in which you can watch the God Kukulcán descend in the form of a snake.
More Info
Open In Google Maps
Chichén Itzá Mérida, Yucatán, 97170, Mexico

This is a small archaeological zone placed in Playacar, in the heart of the hotel zone in Playa del Carmen, behind the beach. In this zone lived a slave Jerónimo Aguilar, a shipwreck survivor who arrived in 1511, some years before the Spaniards. It’s amazing to see the blend of the contemporary and the ancient world in a popular tourist place. The ruins can be viewed in Playacar where phases one can be accessed off Avenida 10 (just south of Calle 1 sur) and two (at the end of Avenue 10). You only need to take a bus to this neighborhood or you can even go biking; you’ll the see the zone at some point of the Avenue that bears the same name. 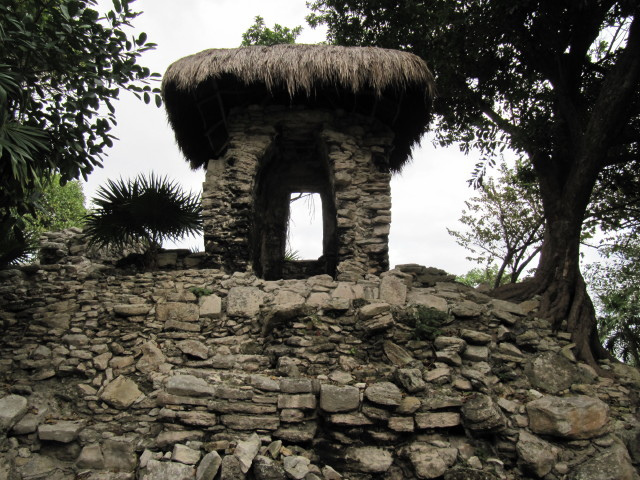 This zone occupies 40 km of territory, conformed by four groups of monumental architecture: Dzibanché or main group, Central Complex or Lamay Group, Tutil and Kinichná. It’s amazing to see the hieroglyphic texts engraved on the monuments of the ladder of the Temple of the Captives, and the sumptuous offerings in burial chambers. These discoveries reveal that Dzibanché was involved in warlike conquests. This place is so old that the original name is unknown, its actual name was given by the archaeologist Thomas Gann in 1927, and means ‘wood writing’ (Alluding to the carved wooden lintels located in the bays of the Temple). Admiring these impressive constructions in the middle of the jungle are worth every kilometer of the long trip. 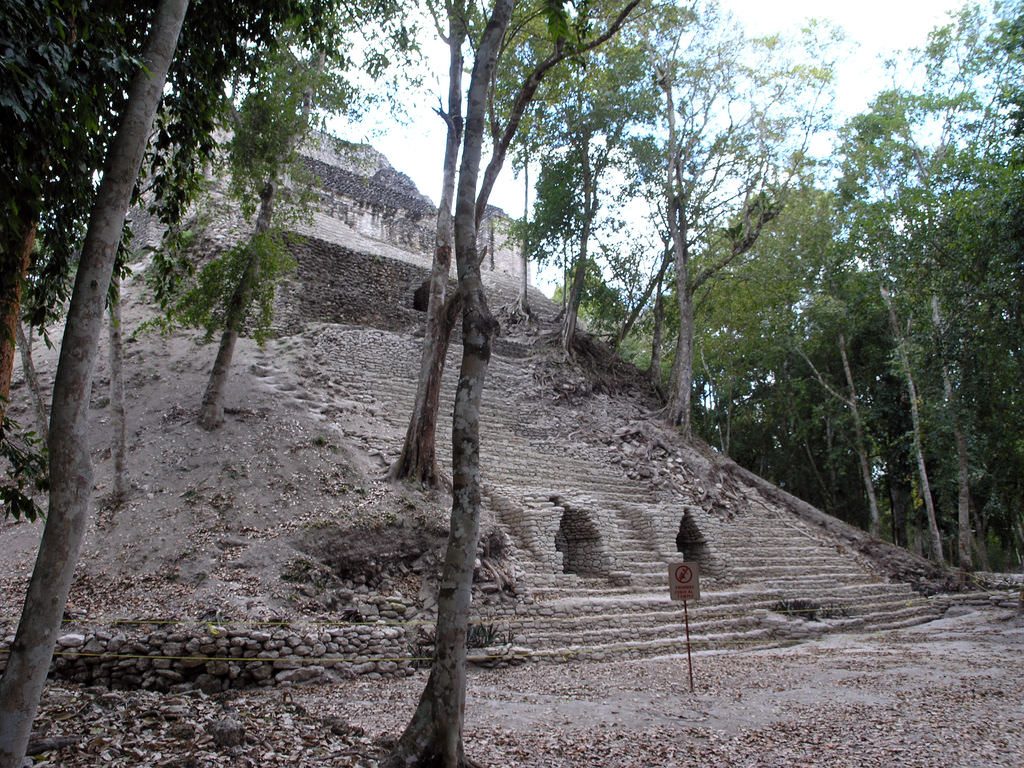 Its name means ‘dark jaguar’ and it’s an amazing archaeological zone that was the seat of the kingdom of “Tlaloc”. Ek Balam has about 40 structures; the most important are a beautiful welcome arch, the ball game, the twin pyramids, the acropolis and a stele depicting one of the governors. Admire the beautifully carved murals and then go top of the pyramids to watch a breathtaking overlook of the Mayan jungle. It’s advisable to take sun cream and mosquito repellent.

This is a pre-hispanic site that blends the stunning architecture of the antique temples with an exotic environment and the turquoise waters of the Caribbean sea. Muyil is one of the 20 most important archaeological sites due to its size and amount of vestiges. Its most impressive building is El Castillo, reaches 17-metres high, the top has a temple that resembles a turret, which makes it different to most of the constructions of the Mayan world. Open 365 days a year, fom 8:00 to 5:00 pm, the cost is cheap and on Sunday is free. 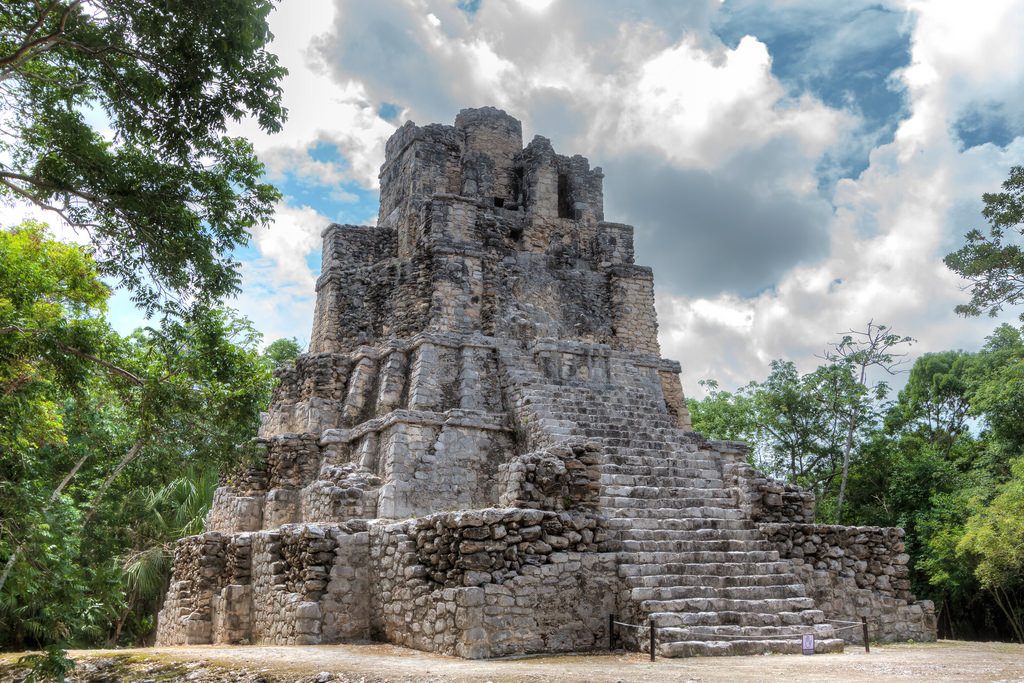