The Best Things To Do in Doha, Qatar 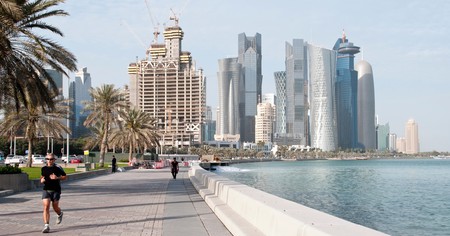 Founded as a tiny pearling and fishing village, Doha has developed over the past 2,000 years into a sprawling futuristic metropolis. Unchanging throughout, however, has been an ability to charm and beguile all who visit. Here is Culture Trip’s guide to the best things to do in Doha.

Today, Doha walks a very fine line between modern cosmopolitanism and Bedouin tradition. Beneath its surface image of gleaming towers and street-prowling supercars, the city has not lost a bit of its old-world charm. In one day, visitors can indulge in ancient history at the Museum of Islamic Art, browse an ultra-high-end mall, fuel up with some authentic streetside shawarma and then get stuck into haggling at the famously bustling Souq Waqif market. 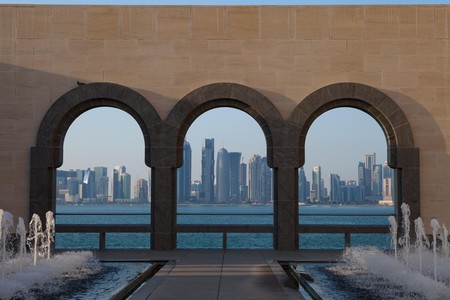 Try food from around the globe

Qatar has always had an exciting mix of cultural influences, and for that reason, its culinary scene is among the region’s most diverse. Qatari, Filipino, Nepalese, Chinese, American, Mexican, Malaysian – the food options are endless. With celebrity-helmed, Michelin-star, haute-cuisine hotspots, cheap eats, street food and more, there is something to suit every palate and budget.

The large Indian population has made a particularly pronounced mark on the restaurant scene. A local favourite is the family-run Al Jamal Restaurant in Bin Mahmoud for chicken biryani, haleem (a type of stew) and kadai chicken with roti. The Bin Mahmoud area, in general, has recently emerged as a haven for foodies, with a cluster of new international restaurants springing up rapidly.

For traditional Qatari specialities, head to Bandar Aden on the edge of Souq Waqif for giant plates of baked lamb. If you’re looking to be energised, check out one of Doha’s fashionable coffee shops, such as the stylish Flat White Specialty Coffee. For something more relaxing, however, try a sundowner on the rooftop bar of Nobu Doha. The bar offers a vast range of tantalising tipples – as well as 360-degree views of the Corniche and the sprawling city beyond. 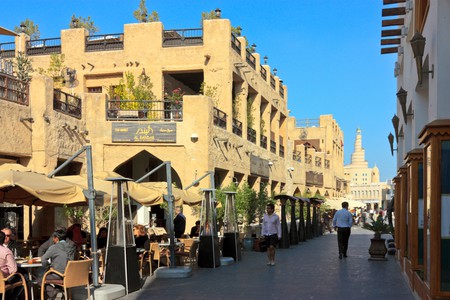 Learn about two millennia of Islamic art and tradition

At the heart of Qatar’s cultural landscape is the Museum of Islamic Art, sitting majestically on its own island on the Corniche. Home to the region’s most impressive collection of Islamic artefacts, the museum proudly exhibits three floors’ worth of exquisite textiles, ceramics, enamel work and glass. However, the building alone is worth a visit.

Masterminded by award-winning Chinese-American architect IM Pei, known famously for designing the glass pyramid at the Louvre in Paris, the structure replicates a modern fortress. However, the art space is also known as ‘the eyes of Doha’ because it resembles a woman’s face shrouded by a burqa. Note that the museum does adhere to a strict dress code, so shoulders and knees must be covered. 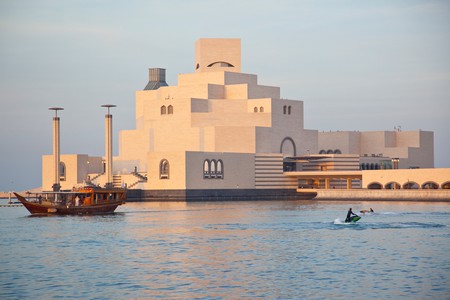 Pro tip: Be sure to check out the Museum of Islamic Art’s library, where you can unearth rare manuscripts, first editions and an extensive collection of century-old cookery books.

Get your fill of art and culture

In recent years, Qatar has made great efforts to invest in Doha’s booming art scene and, in particular, the city’s cultural treasures. In March 2019, Doha’s National Museum of Qatar opened. Designed by world-renowned French architect Jean Nouvel, it symbolises the rose rock formations found in Qatar’s desert. The state-of-the-art museum traces the country’s long and rich history, showcasing artefacts from prehistoric to contemporary times. Film lovers will want to check out the programme of evocative art films on display in the galleries.

For a renewed appreciation of the country’s fascinating history, visit the new Msheireb Museums, comprising Bin Jelmood House, Company House, Mohammed Bin Jassim House and Radwani House. Each explores a different aspect of Qatari life, sharing the country’s great triumphs and tragedies. Everything is covered – from the cultural evolution of family roles and the discovery of oil to the region’s involvement with slavery and human trafficking. Many of the stories are told in the first person and make for a sobering yet insightful experience.

Next, check out the city’s cutting-edge art. Visit the Mathaf: Arab Museum of Modern Art or the Fire Station Gallery for a revolving roster of exciting contemporary exhibitions.

There’s also a range of private collections to explore, including the curious collection of Sheikh Faisal Bin Qassim Al Thani, a collector and car buff. His pieces range from prehistoric fossils to 18th-century pistols. 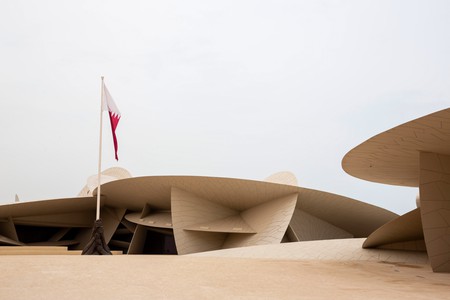 Pro tip: Be sure to buy your tickets ahead of time for the National Museum.

Explore the alleyways of a traditional souq

Renovated in 2006, the buildings of Souq Waqif (‘standing market’) may, with a couple of exceptions, be little more than a decade old, but a market has stood on that same spot continuously for hundreds of years. Lying on the banks of a small stream, it is now the city’s most popular destination. As it’s a traditional market with an additional suite of modern cafés and eateries, a ramble through its alleyways is a feast for the senses – spices fill the air with a thick and delicious scent. Traditional Qatari clothing is also made here, including the beautiful gold-woven bisht (ceremonial robes).

For a more relaxed atmosphere, head south to Al Wakrah, where a similar souq has been established. Thanks to its beachside location, the vibe is laid-back but just as much fun – with cafés, restaurants and shops selling everything from perfumes to cooking utensils. 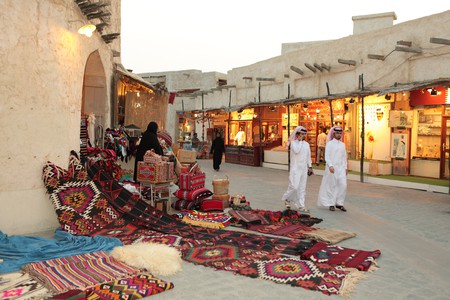 Pro tip: Get the most out of Souq Waqif and visit at night when the market really comes alive. Set up camp in one of the cafés on the ‘restaurant street’ and people-watch.

Get up close to a falcon or a camel

Qatar’s national sports are falconry and camel racing. At Souq Waqif, you can visit the Falcon Souq, where breeders come to buy and sell their prized birds. A good hunting falcon can reach up to 1 million Qatari riyals (£226,000).

Dozens of hooded birds sitting quietly on their perches can be an eerie sight, but don’t be afraid. In the souq, the staff will allow you to perch one of these incredible birds on your arm, creating the perfect Doha selfie opportunity. You can also explore the leather hoods and equipment used in falconry. Pop next door to the Falcon Hospital, where the birds are taken for their health checks.

For camel racing, you will have to go a little farther afield. An hour outside Doha is the Al-Shahaniya racetrack. Camel racing is serious business in Qatar – star camels and aces both command big money. Should you want to catch a race, visit during a weekend beginning in November through to March. Also, visitors can stop by the track every day at 9.30am or around 5.30pm to watch the camels as they go to the arena for practice and exercise. 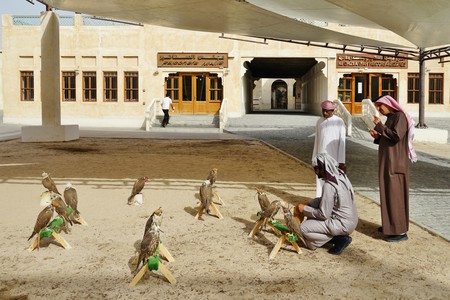 Pro tip: If you miss the camel walking time, you can also visit the nearby stables.

Thanks to its tax-free status, Doha has some of the best shopping in the world. From palatial mega-malls to small independent boutiques, there is something to surprise and delight even the most seasoned shopper. Qatar’s malls are designed to be multipurpose havens away from the heat – with shopping, eating and entertainment all bundled into one air-conditioned complex.

On the outskirts of the city, the Mall of Qatar is the biggest in the country and offers everything from upscale designer boutiques to a multiplex cinema. In a similar vein is Doha Festival City – home to the Angry Birds theme park, a soon-to-open snow-dunes attraction and some of the best-known chain restaurants in the world. For a true one-of-a-kind bargain, head to Souq Waqif and seek out one of the charming antique shops. 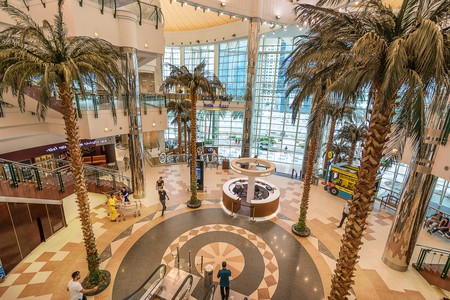 Pro tip: Find a truly unique keepsake at the antique shops in the Souq Waqif. Sift through regional treasures, from miniature dhows to vintage cameras, to find the perfect memento.

Head out of town to experience a natural wonder

Seemingly endless desert surrounds Doha – but for something extraordinary, head to the Inland Sea. Just over two hours outside the city, it is accessible only by off-road 4×4. Khor Al Adaid (its Arabic name) is one of only three places in the world where the sea meets the desert sand. This tidal bay connects to the Arabian Gulf channel, which is approximately 10 kilometres (6.2 miles) long. When standing on the Qatari side of the bay, visitors can see Saudi Arabia, which shares the strip of water.

UNESCO recognises the Inland Sea as a natural reserve, home to diverse plants and animals – including an extremely rare species of turtle. Visit the area in the cooler months and swim, fish, camp or race in an SUV across the dunes, an activity commonly known as dune bashing. 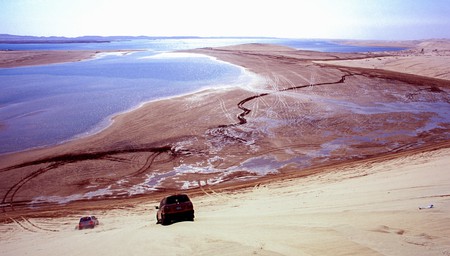 Pro tip: The best way to see the Inland Sea is by booking an organised tour – they will get you there, via a thrill-ride across the undulating dunes, and then treat you to a barbecue lunch or dinner.

This article is an updated version of a story created by Farrah Saville.