A Guide to Doha’s 8 Coolest Neighbourhoods 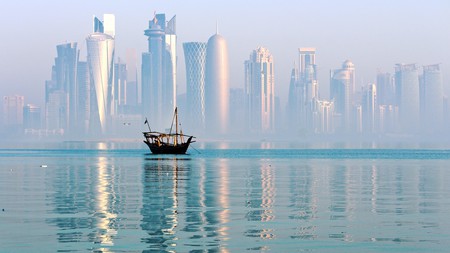 Doha, Qatar, is a multicultural city made up of unique and diverse neighbourhoods | © Nashira A. Hameed / EyeEm / Getty Images

Doha, Qatar, is a vibrant, multicultural city that sits along the Arabian coastline, providing stunning views across the Persian Gulf towards the United Arab Emirates. This small capital city is also home to diverse districts, from the sky-high towers of downtown West Bay to the glitzy, exclusive developments that make up The Pearl-Qatar.

If you’re looking to stay in the heart of the city, among its towering skyscrapers glinting in the hot midday sun, then head to West Bay. A cluster of imposing residential towers, office blocks and hotels soar above the streets below, and by night, many of the buildings come alive with their glittering light shows. The temperature in Doha can reach 55C (131F). But if the weather permits, start your day by taking a walk alongside Doha Corniche – a waterfront promenade that runs the length of the bay – or find a quiet spot to relax and enjoy the hot sun while reading a book. 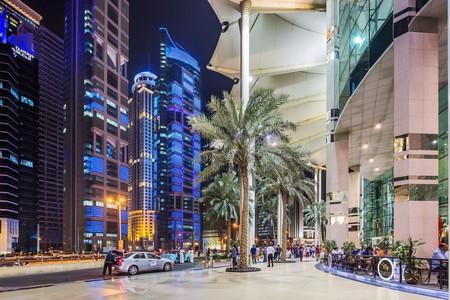 This seaside district is a developing and expanding area that was created in the 1980s following a major land reclamation project along the coastline. Since then, dozens of skyscrapers have risen, with plans of expanding. Al Dafna, which neighbours West Bay and could be considered part of the wider West Bay area, is rapidly becoming the new centre of the city and is home to a range of foreign consulates as well as the City Center Mall, among the largest malls in the Middle East. Roam around the shopping centre’s 140,000sq m (1,506,948sq ft) space, and enjoy some retail therapy before ending your visit at one of the mall’s many restaurants. 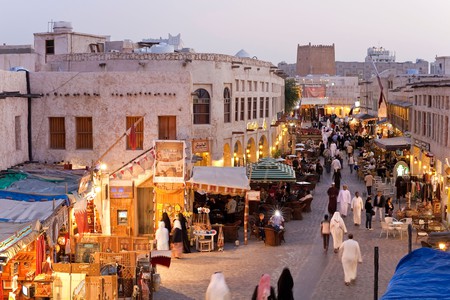 Known as Doha’s historic centre, Al Jasra is a neighbourhood that is steeped in tradition. The area was named after the Arabic word jasrah (bridge), as the partially submerged rocks on the coastline resemble a bridge. Here, you’ll find several historic landmarks, such as the Old Well and Souq Waqif – among the largest marketplaces in Qatar. As you walk through the narrow passageways of market stalls, you’ll find vendors selling everything from spices and traditional garments to souvenirs. After your round of shopping, visit the Pearl Monument – a famous fountain sculpture – situated at the entrance to the Dhow Harbour. Depicting a large open oyster, it was erected to celebrate Doha’s past as a pearl exporter. 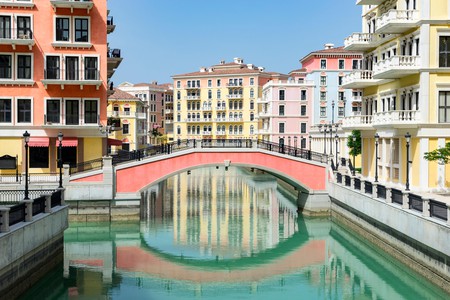 This elite artificial island is set on 4sq km (2sq mi) of reclaimed land just outside Doha. It’s home to an urban development that can house up to 50,000 residents, offering a glimpse into the lavish lifestyle of many Qatari families. Home to luxury apartments, villas, penthouses and townhouses, it also has stunning views of the sea and harbour through the masts of luxury yachts docked in the marina. Take a stroll along the sun-drenched waterfront in Porto Arabia, or relax on one of the island’s beautiful private beaches before stopping by the area’s high-end restaurants and world-class shops.

The Pearl-Qatar is home to 12 districts, each with architecture inspired by places around the world | © Sonatali / iStock

To reach the marina, hop on a water taxi that runs daily until midnight to get a feel for an exclusive part of Doha. Those looking for food or entertainment options should visit the Medina Centrale, a Mediterranean-inspired town square with a large selection of restaurants, cinemas and shopping. 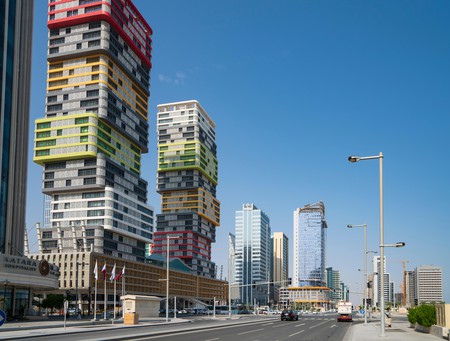 Lusail is a suburban neighbourhood on the outskirts of Doha. Located north of The Pearl-Qatar, the area is currently expanding and will be able to accommodate 450,000 people when complete. As it’s located farther out of the city, the area rarely sees tourists, making it the ideal place to visit if you’re looking to be surrounded by Qataris. Lusail, which was developed using land reclaimed from the sea, is home to multiple theme parks, theatres and shopping malls. 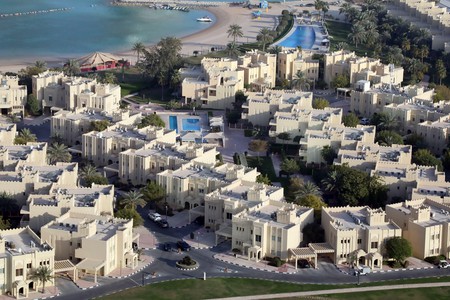 Also known as Leqtaifiya, West Bay Lagoon is a residential area made up of villas and low-rise blocks situated inland from The Pearl-Qatar, encompassing the popular cultural village of Katara. The stunning area, which is popular among families due to a large number of available schools, is also well known for its luxurious waterfront villas, which are some of the most expensive in the country.

Al Waab, also known as Al Baaya, is a suburban district and home to some of Doha’s most popular attractions and amenities. If you’re on the hunt for a place with lots of green open space, this is the place for you. Here, you’ll find the beautiful Aspire Park – the biggest park in the city. It’s here where you’ll find some of Doha’s top sports facilities, including the Khalifa International Stadium and Aspire Dome. The family-friendly area also offers lots of activities for children, including the park’s play area, Doha Zoo and Gondolania Theme Park – a large indoor amusement park based inside the mall.

Before you leave the area, head over to the Villaggio Mall. Known for being Qatar’s most popular shopping destination, it boasts more than 200 shops, from luxury brands to high-street chains, as well as an ice rink, bowling centre and 150m-long (492ft-long) canal complete with gondola rides. Towering above the mall is The Torch (or The Aspire Tower), which offers five-star accommodation and fine dining, including Doha’s only revolving restaurant.

This busy and bustling area of Doha lies close to the site of the city’s old international airport. Get a glimpse of the local atmosphere in this popular residential area by walking along Al Matar Al Qadeem Street, also known as Old Airport Street. Have a Qatari sweet at one of the many cafés, or visit The Mall Doha, Qatar’s first shopping centre.