The Top Things to See and Do in Petra, Jordan

ASIA
/
JORDAN
/
Things to Do 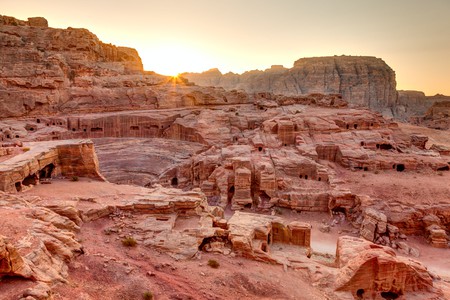 Watch the sunset over the tombs and amphitheatre in Petra, Jordan | © Alexey Stiop / Alamy Stock Photo

When admiring Petra, the words of Dean Burgon’s famous poem come to mind: “Match me such marvel save in Eastern clime, a rose-red city half as old as time.” The Rose City in Jordan is famous for its multicoloured sandstone and genuine Nabatean architecture, making it one of the most archaeological treasures in the Middle East and the world.

Escape the crowds by visiting Petra through the exclusive ‘back door’ route on Culture Trip’s specially curated nine-day Jordan trip, led by our Local Insider.

Start at the Obelisk Tomb and Bab Al-Siq Triclinium

As soon as you arrive at the Visitor Centre, this beautiful monument is first to welcome you. The triclinium is a chamber with three benches, which the Nabateans used to honour the dead by sacrificing feasts every year. It also neighbours the Egyptian-influenced Obelisk Tomb. Bab Al-Siq, or the door of the Siq, is also the gate to the main entrance to Petra, from which your 1,200m-long (3,937ft) journey begins. 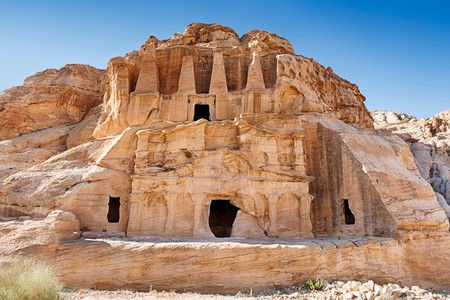 Look for the cobblestone water channels while walking through Al-Siq

The long, deep and narrow gorge of natural golden beauty is soaring 80m (262ft) above your head. Whether passing through by foot, cart or camel, you will be witnessing the typical bizarre-looking formations of Petra on your 1200m-long (3,937ft) journey. The Nabateans were the architects of their time, and they carved water channels, dams and niches into rock, which, if you happen to visit Petra on a rainy day, you might see in action. 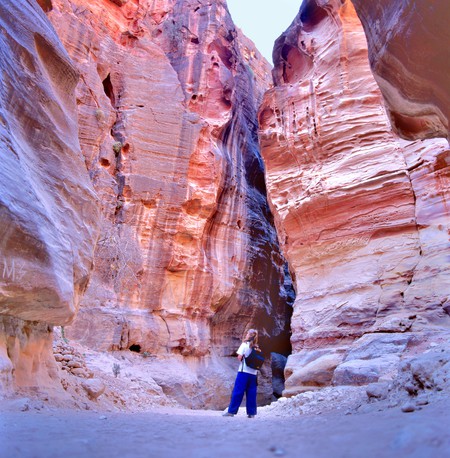 Marvel at the Treasury, Al-Khazneh

Before your walk through the Siq has come to an end, the famous Treasury will start emerging bit by bit from behind the rosy rocks. When coming face-to-face with the 43m-high (141ft) monument, you will immediately feel dwarfed. Al-Khazneh was carved in the first century as a tomb for a Nabatean king and later used as a temple. Unfortunately, you are not allowed to enter the Treasury for fear of wreckage.

Seeing the Treasury in daylight is an overwhelming experience, but paying it a night visit will lift you into another magical dimension, as hundreds of candles are illuminated to guide your path through the Siq and to the glorious Treasury. 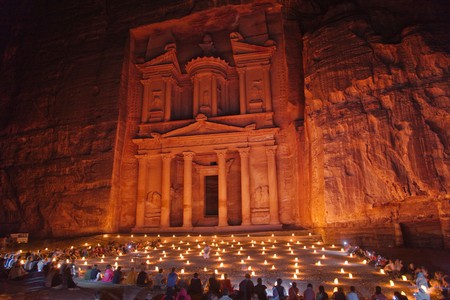 The spectacular view of Petra down below seen from the High Place of Sacrifice is worth taking each of the many stone steps leading up to it. You will be standing tall on holy ground, where the Nabateans used to hold religious ceremonies honouring their gods. 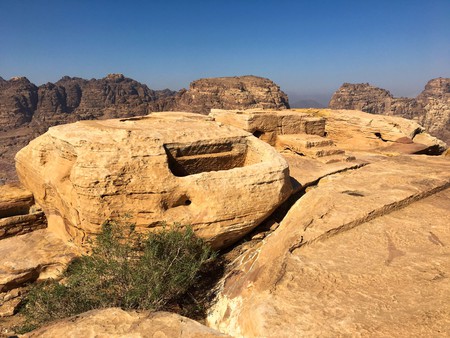 It is by far the largest of the Royal burials and was later to be reconsecrated as a Byzantine church. There are three chambers above its doorway. The central chamber is blocked by a stone that depicts the man buried inside, which will send shivers running down your spine. 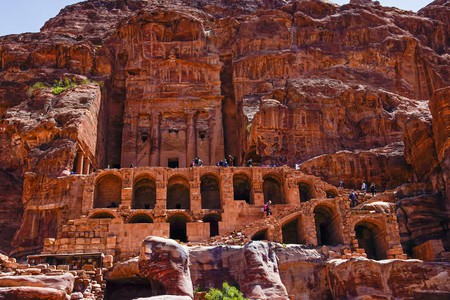 Spice up your adventure by riding a horse carriage

Tired of walking? You can always take a horse carriage and explore the long Siq while sitting comfortably and admiring the non-measurable height of the cobblestone walls. Enjoy your journey to the famous Treasury in a magic horse ride. 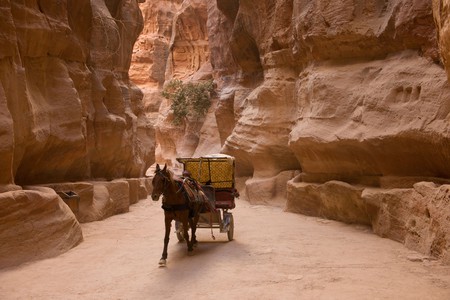 End your journey by mounting 800 stairs to the Monastery, Ad-Deir

Take a long deep breath, and enjoy the second-most famed monument of Petra, standing tall in front of you. The overall design resembles Al-Khazneh in many ways, but with a rather simplified architecture. 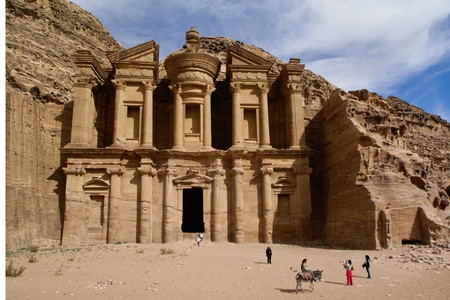 By the time you have reached the Monastery, you might as well stay for a couple of minutes and witness one of the most beautiful sunsets on Earth. Watch the cold cobblestones turn rose gold under the sun’s last beams.

Ride a camel, and engage in small talk with the Bedouins

A journey through Petra can never be complete without riding on the back of the ship of the desert. Petra’s Bedouins are like any desert people of Jordan; humble, generous and multilingual. Some Bedouins can speak up to seven languages fluently, learned only by engaging with visiting tourists. So, when you ask for a camel ride, they will always be there making sure you are safe and sound. 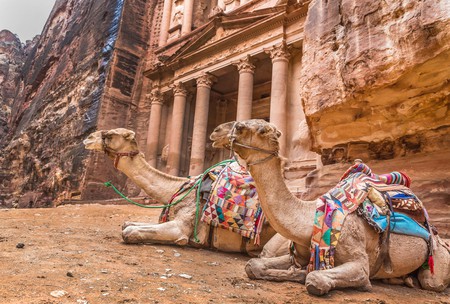 Relax at the Mövenpick Resort Petra

Petra hosts a number of hotels and resorts to suit your taste and budget. Mövenpick Resort Petra is considered the most favoured among tourists for being adjacent to the Al-Khazneh monument and for its stunning authentic interior and bar. 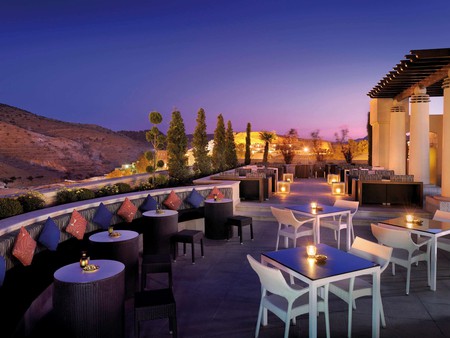