The Best Things to Do and See in Soho, London

Once known as the centre of sleaze, Soho has cleaned up its act and is permanently buzzing with people, whether they’re shopping, drinking, eating or watching a show. Here’s how to spend a day in this busy Central London enclave.

Chinatown is full of places to get dim sum, but none are as stylish as Yauatcha Soho. It might be pricier than nearby establishments, but you won’t feel short-changed when it comes to the food, especially its prawn and bean curd cheung fun and venison puffs. If you really want to push the boat out, try some of its exquisite desserts too.

Rock out at Hank’s Guitar Shop 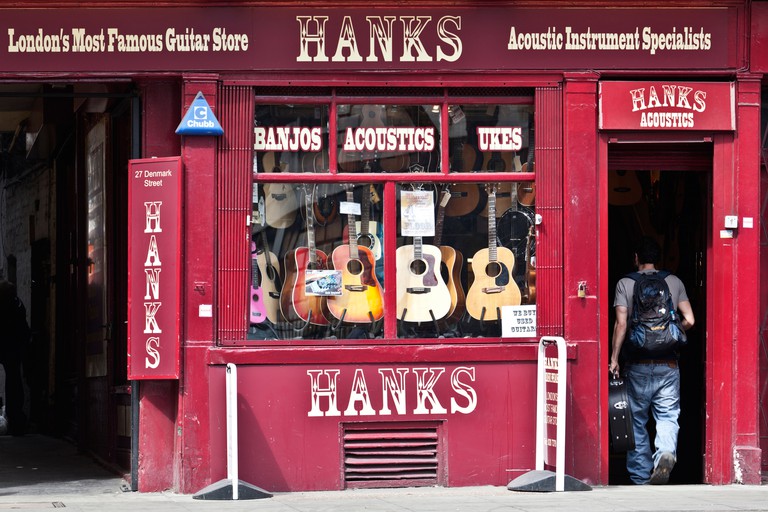 Even if you can’t shred it on an axe, Hank’s Guitar Shop is still well worth a visit to browse its impressive selection of rare and vintage guitars. It has years of experience in trading instruments and gear, so if you’re after something specific, the staff can usually source it for you.

Cocktail Bar, Restaurant, British, Russian, $$$
Facebook
Email
Twitter
Pinterest
Copy link
Share
Map View
A glamorous day on the town is not complete without a stop at Bob Bob Ricard. This Russian-British restaurant is unashamedly luxurious, with opulent decor and a menu studded with rich ingredients – caviar, oysters, lobster, truffle… It has it all. But this place is famous for its “Press for Champagne” buttons at each table, so throw caution to the wind and splash out.
Open In Google Maps
1 Upper James Street, West End, London, England, W1F 9DF, United Kingdom
+442031451000
Visit Website
Give us feedback

Look out for the Seven Noses of Soho

As you stroll around Soho, keep an eye out for noses on the walls and buildings. Installed by artist Rick Buckley in 1997 as a protest against the increase of CCTV cameras on the streets, there were originally about 35 noses (made from plaster casts of his nose) attached to buildings in Central London. Seven remain in Soho, and since Buckley didn’t initially take credit for them, many urban myths about their origin have sprung up. For example, it’s said that if you can find all seven, great fortune will come your way. Now, we can’t vouch for that, but it doesn’t hurt to look, does it? 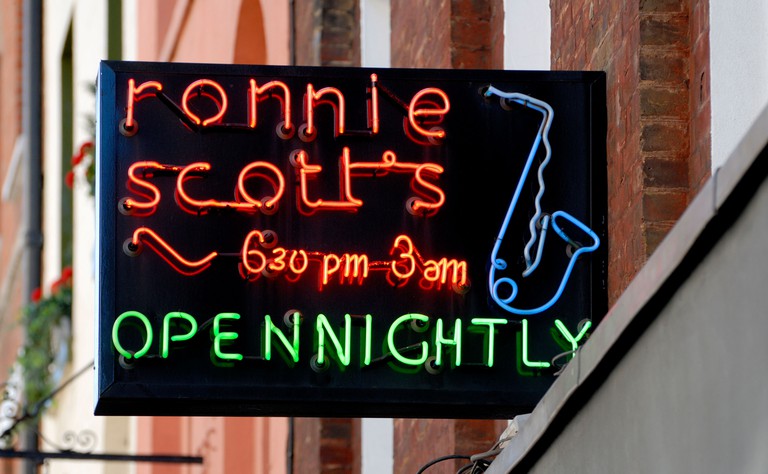 Ronnie Scott’s is one of the most celebrated jazz clubs in the world and a Soho institution. Many famous faces, including Nina Simone, Prince, Ella Fitzgerald and Jimi Hendrix, have graced the stage here. The venue still hosts international jazz artists, so you’re guaranteed to hear great music every night of the week.

Pick up some new kicks at Axel Arigato

You’d be forgiven for thinking that Swedish brand Axel Arigato’s Soho sneaker store was an art gallery. It has tall white walls with lots of metal and concrete accents and huge terrazzo stone tables that act as plinths for the trainers on display. Like the store, the shoes are minimalist, modern and elegant – good luck leaving with just one pair.

Experiment with ice cream at the Chin Chin Dessert Club

Nitrogen ice-cream wizards at Chin Chin Labs have expanded out from Camden with a dessert club on Greek Street, making it the ultimate ice-cream shop. You can get scoops frozen right in front of you, but you should go all out with one of its whackier creations, which have included the Choux-Wich (that’s an ice-cream sandwich made with a choux bun), a Miracle Cone (sugar-free ice cream that tastes sweet once you pop a magic pill) and the Avo-Taco (a waffle taco filled with avocado ice cream).

Take a trip back in time at Cahoots

Step into this underground bar decked out like an old tube station and be transported back to 1940s Britain. It’s retro all the way at Cahoots, from the vintage carriage seats and piano singalongs to the cocktails served in teacups, hip flasks and milk bottles. It may be quirky and kitsch, but it’s jolly good fun too.

Casual, Unusual, Quirky
Give us feedback