The Most Outstanding Buildings in Valencia, Spain

Jaser Cervantes / © Culture Trip
Valencia is packed with stunning architecture. In the city centre, Romanesque structures sit comfortably alongside everything from late Gothic gargoyles to Modernist facades, while the Turia riverside is home to the famously futuristic City of Arts and Sciences complex. It’s hard to pick favourites in a place like this, but here are just a few of the impressive buildings that you really have to see for yourself.

Building, Historical Landmark, Memorial, Market
One of the most important buildings in the city, the 15th century Silk Market, is a World Heritage Site and considered one of the most wonderful examples of non-religious Gothic architecture in Europe. The interior is meant to represent paradise, with its soaring columns symbolising palm trees reaching towards the sky – or roof – which was originally painted blue. Far less pleasant but equally fascinating are the stone gargoyles perched around the exterior, which are by turn pornographic, nausea-inducing or just completely bizarre.
Looks like it's closed Hours or services may be impacted due to Covid-19
More Info
Open In Google Maps
2 Carrer de la Llotja, València, Comunidad Valenciana, 46001, Spain
+34962084153
View menu
Visit website
Visit Facebook page
Send an Email
Give us feedback

Bazaar, Market
Jaser Cervantes / | © Culture Trip
For something a bit more recent, this modernist National Monument in the city centre was originally a market for garden produce, fish and meat. The market stalls are long gone and instead the space now contains several chic cafes, a flower stall and sometimes, a stage for live music and other events. It was designed by Valencian architect Francisco Mora Berenguer and completed in 1916.
More Info
Open In Google Maps
19 Carrer de Jorge Juan, València, Comunidad Valenciana, 46004, Spain
+34963371101
View menu
Visit website
Visit Facebook page
Send an Email
Give us feedback

Building, Museum
Another gem from the 15th century (although it was renovated in the 18th century) this lavishly built palace was originally home to aristocracy. It now houses the National Museum of Ceramics, with artefacts telling the story of Valencia’s history and customs. It’s worth a visit just to admire the outside of the building, decorated with incredible textures and colours.
Looks like it's closed Hours or services may be impacted due to Covid-19
More Info
Open In Google Maps
2 Carrer del Poeta Querol, València, Comunidad Valenciana, 46002, Spain
+34963516392
View menu
Visit website
Visit Facebook page
Send an Email
Give us feedback

This might be the first building you see when you arrive in Valencia, and it’s a special one, declared a Historical Artistic Monument in 1961, and designed by Valencian Demetrio Ribes Marco. It was completed at the beginning of the 20th century, and walking into the entrance hall feels like stepping back in time. Before its completion, trains used to run right through the main doorways of the unfinished building to their final destination at what’s now the Town Hall Square. 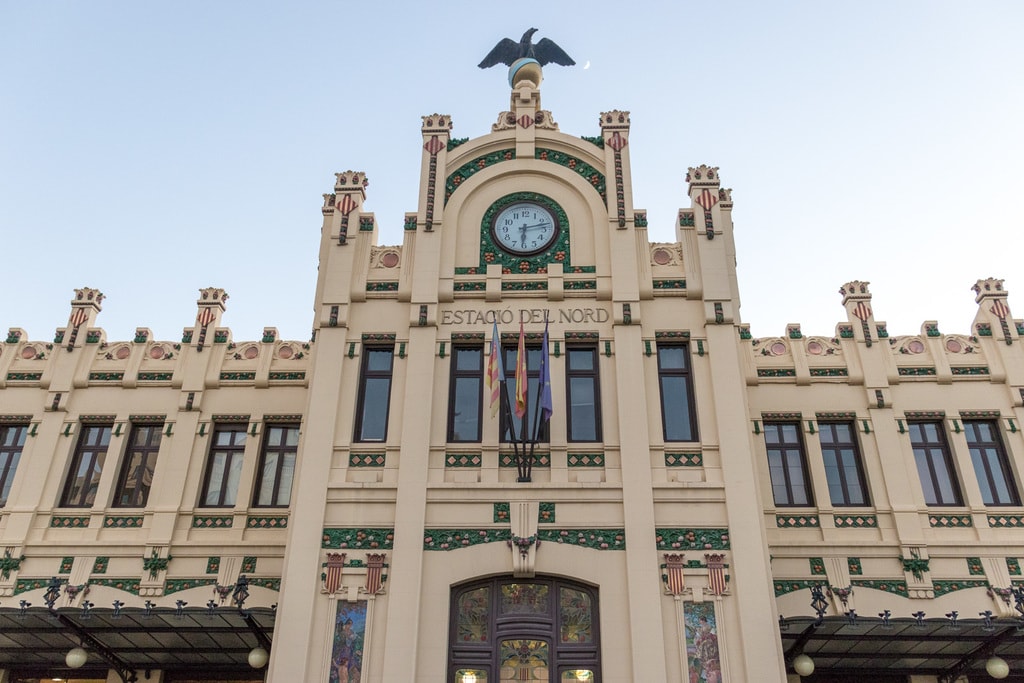 Building, Cinema, Museum, Opera House, Aquarium, Concert Hall, Architectural Landmark
The work of architect Santiago Calatrava may not be quite to everyone’s taste, but whatever your opinion of it there’s no doubt this complex of futuristic buildings is becoming a well-known symbol of Valencia, and is a must-see during any visit to the city. Stroll through the gardens and choose your favourite of the buildings; if there’s time, explore inside and you’ll find interactive science exhibits, a huge aquarium, a concert hall and much more. Find out more in our guide to the City of Arts and Sciences.
Looks like it's closed Hours or services may be impacted due to Covid-19
More Info
Open In Google Maps
7 Avinguda del Professor López Piñero, València, Comunidad Valenciana, 46013, Spain
+34961974686
View menu
Visit website
Visit Facebook page
Send an Email
Give us feedback
Book with our partner and we will earn a small commission.
Give us feedback