The 10 Most Beautiful Beaches in Lanzarote

Lanzarote - Playa de Papagayo | © Canary Islands Photos - UNLIMITED / Flickr
As with Spain‘s other Canary Islands, huge volcanic eruptions were key to the formation of Lanzarote. Unlike its neighbours, it only has a few black sand beaches, showcasing instead ubiquitous lava rock against fine golden sands and crystal blue waters. Here’s our pick of the most beautiful beaches.

Certainly one of the most well-known of all the island’s beaches, Playa de Papagayo actually comprises a series of beaches separated by volcanic rocks. The main Papagayo beach is the the last one before the Punta del Papagayo, and also the only one with somewhere to eat – a chiringuito-style bar-restaurant sits above the cove. The sand is fine and golden with lovely clear water that makes for great snorkelling. Importantly, thanks to its location at the southern tip, Papagayo usually enjoys the best weather on the island.

As hinted by the name, at barely 100 metres (328 feet) long, Playa Chica is a one of the smaller beaches, but also one of the prettiest and most popular in Puerto del Carmen. Sheltered by protrusions of lava, the water is particularly calm, making it very popular with divers exploring the stunning sea beds just off-shore. It is also a great place to see some sea-life, including the enormous grouper fish called Felix. 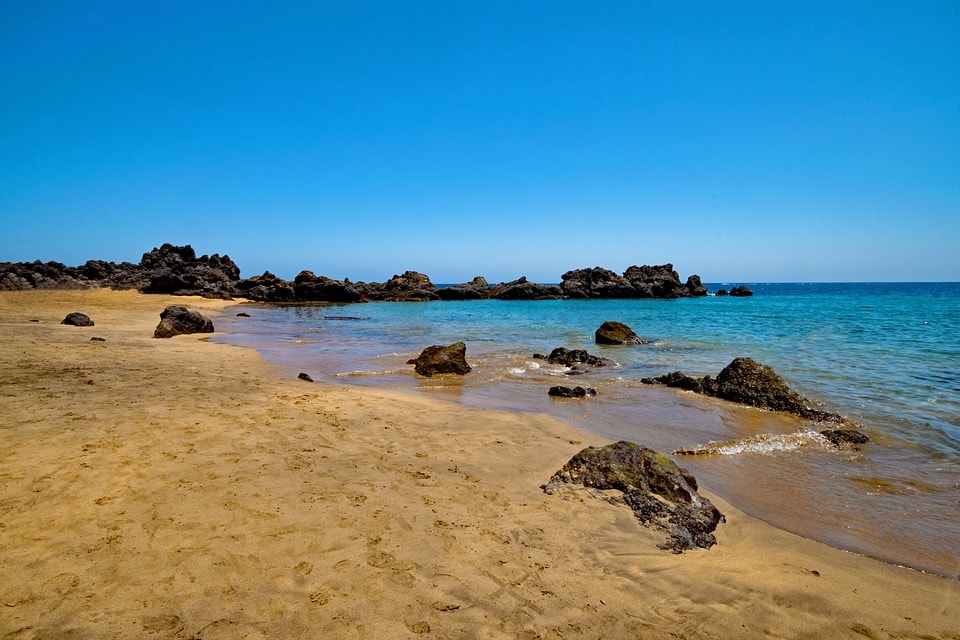 The long and dramatic Playa de Famara is located on the northwest coast of the island, away from the resorts and back by spectacular cliffs. The sweeping bay combines fine sand and volcanic rock, and its position means it’s more prone to wind than most. This means some impressive waves that inevitably draw the surfing crowd. Expect conditions to be rather fresh outside of the summer months. 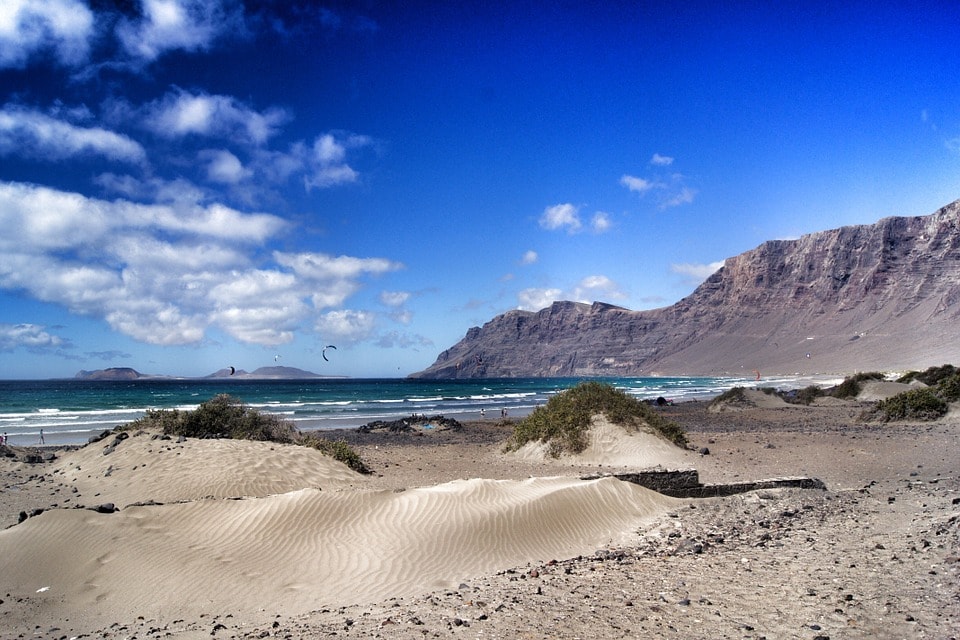 One of the two main beaches in the Playa Blanca resort, Playa Flamingo has fine sand sloping gently into clear waters. Sheltered by two man-made breakwaters, the sea is very calm, making it great for smaller kids, while palm trees provide some shade. There are also several bars and restaurants to escape the sun on the beachfront promenade.

This is probably the most remote and unspoiled beach, but getting to Playa de las Conchas isn’t easy. It’s located on the far side of La Graciosa, an islet just off Lanzarote’s north coast, meaning a ferry from the main island and then a 45-minute walk (or 20-minute cycle). But the beach’s virgin beauty is stunning, with fine golden sand and turquoise sea. Anything beyond paddling, however, can be dangerous with no lifeguard and some serious swells. 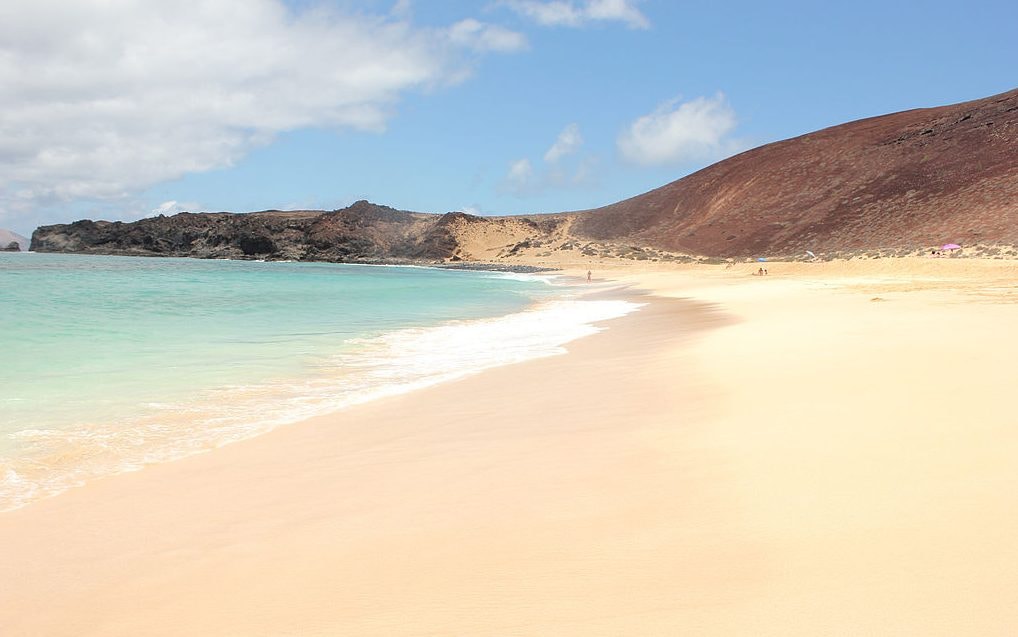 Rather than being just a single beach, Caletón Blanco is a string of lovely tiny coves of contrasting dazzling white sand and jet-black lava rock. Set on the north side of the island, it can be a little windy and not as warm as its southern counterparts, but the surroundings are stunning, and access is easy by road. Natural pools created by the tide are also great as shallow splash pools for toddlers.

Another beautifully isolated beach on La Graciosa isle, Playa La Francesa comprises two sections of golden sand, backed by volcanic rock and dunes. Unlike Playa de las Conchas, this beach is south-facing with calm swimmable waters, while also being a popular anchoring point for day-tripping boats. The more adventurous can brave the a 45-minute hike from the island’s main settlement, Caleta de Sebo. 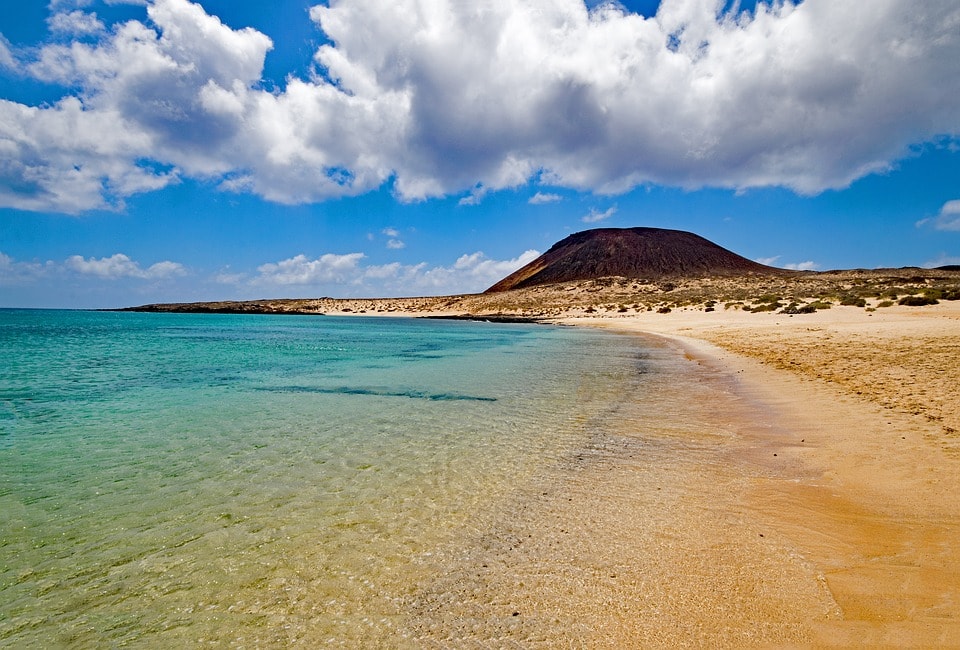 While the sand at the Playa de los Pocillos is more off-yellow in colour, the beach is wide and scenic with a gentle slope into mostly calm, shallow waters. It’s popular with families and children, with a fun, buzzy atmosphere over the summer months. September sees a peculiar phenomenon, when the expanse of sand is covered with a thin layer of saltwater, known as the pine tides. A promenade filled with shops, cafés and restaurants also runs the length of the beach and all the way to Puerto del Carmen.

Located in the east of the island, Playa Del Jablillo is another beach that mixes light sand with dark volcanic stone. Bookended by these rocks, the natural breakwaters create a lagoon at low tide, perfect for children and novice scuba divers. Keep your eyes firmly on the beach though, as an enormous resort hotel just behind does blot an otherwise very scenic spot.

While it’s not somewhere to spend a typical day sunbathing, the Playa del Charco de los Clicos is a stunning example of volcanic beachscape. Its striking pitch-black sand contrasts with red cliffs and a strange green lagoon (coloured by algae), with a viewing platform to appreciate this spectacular and curious natural phenomenon. 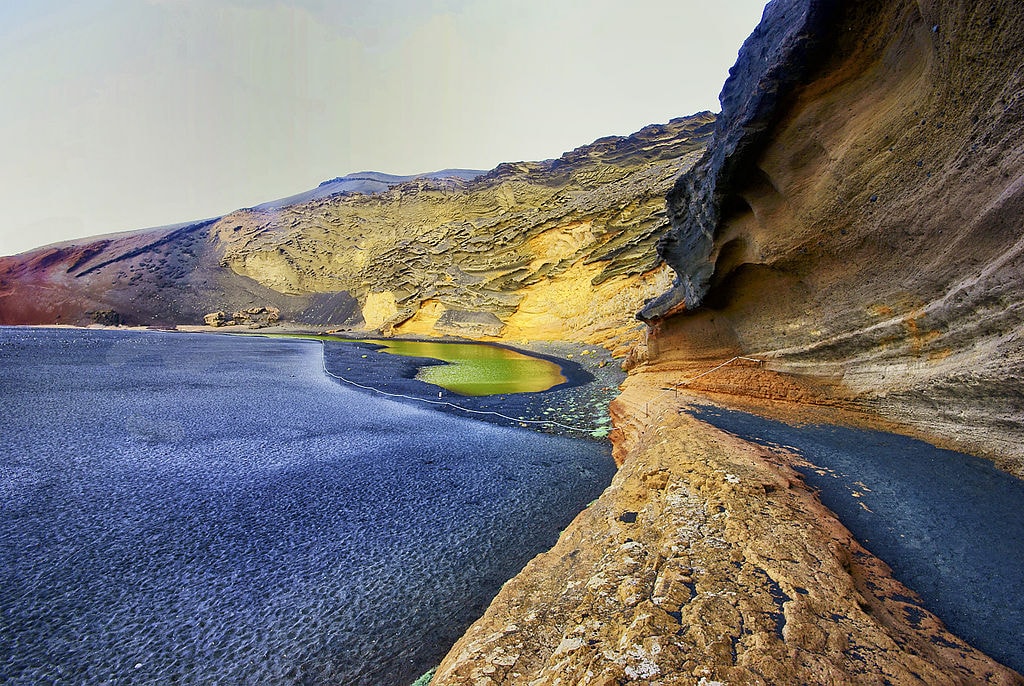