How To Spend a Weekend in Dublin 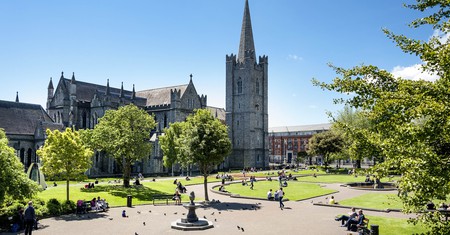 Dublin is a relatively compact city, but one teeming with history and culture, making it ideal for exploring on a weekend trip away. This itinerary guides you through the best that the Irish capital has to offer in just 48 hours.

A weekend in Dublin doesn’t have to be rushed. With careful planning, visitors can absorb the modern city’s Medieval beginnings, its past as a battleground in Ireland’s struggle for independence and the incredible literary, musical and cultural contributions this small but steadfast city has made to the world. Dublin’s long and fascinating history weaves through the city like the River Liffey, and here’s how to explore it in only two days.

Morning: Tour a working whiskey distillery in the historic Liberties

Many who visit The Liberties go straight to the famous Guinness brewery, not realising that this centuries-old Dublin neighbourhood was also once renowned for whiskey production – during the 1800s, it even held the world’s largest distillery. The tradition returned to the area in 2015 with the opening of the Teeling Whiskey Distillery, the first to open in Dublin in 125 years. It’s open daily from 10am for tours, but due to its popularity, online booking is advised. 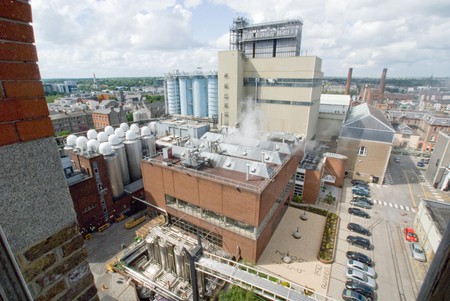 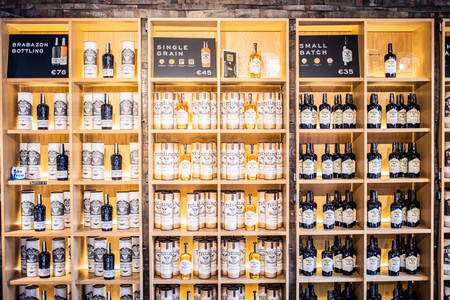 Afterwards, get something to eat nearby at The Fumbally, which took the prize for Ireland’s best brunch at the 2019 Irish Breakfast Awards. Don’t expect your stereotypical “Irish breakfast” – the offerings at this café include everything from kefir to pulled porchetta, using plenty of local ingredients to create an innovative and filling menu.

Pro tip: On Saturday mornings, The Fumbally runs a food market in their community space. Get here early to pick up some fresh pastries from the incredible Scéal Bakery – based across the river in Smithfield – to take with you on your day. They sell out quickly!

Afternoon: Admire the architecture of the Medieval Quarter

Dublin, as we know it today, was founded around the Christchurch area, where you’ll find some of its oldest and most impressive architecture. From The Fumbally, it’s a five-minute walk to St Patrick’s Cathedral, Ireland’s largest and tallest church dating back to 1191. Nearby on Bride Street is a beautiful but often overlooked piece of more modern Dublin architecture, the early Art Nouveau Iveagh Baths building. 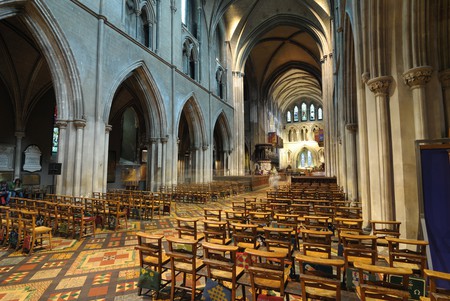 Next, tour the 11th-century Christ Church Cathedral or visit St Audeon’s – Dublin’s last remaining Medieval parish church. The latter is flanked by one of only two surviving pieces of the old city wall, which also contains the last standing city gate. Finish at Dublin Castle, taking a guided tour or just exploring the gardens. Make sure you stop by the Dubh Linn Garden, at the location of the original dubh linn (black pool) that gave the city its name (a great place to sit and enjoy your pastries). 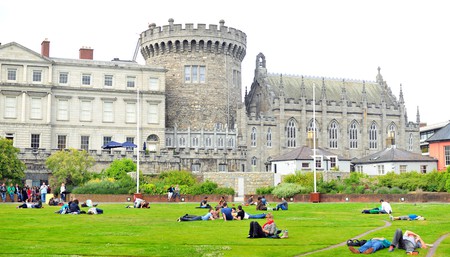 The Dubh Linn Garden, by the Dublin Castle, makes for a relaxing break in your day | © Jonny White / Alamy Stock Photo

Pro tip: The Chester Beatty Library at Dublin Castle holds an incredible array of art and rare books from across the globe, including a number of religious manuscripts from world faiths.

Evening: Sample modern Irish cuisine and see a play in the city centre

Dublin has produced several of the world’s finest playwrights, and there are few better ways to spend an evening in the city than watching a play at one of its historic theatres, such as the Abbey Theatre (co-founded by WB Yeats in 1904) or Gate Theatre. Booking of tickets is advised to ensure you can see the production of your choice. 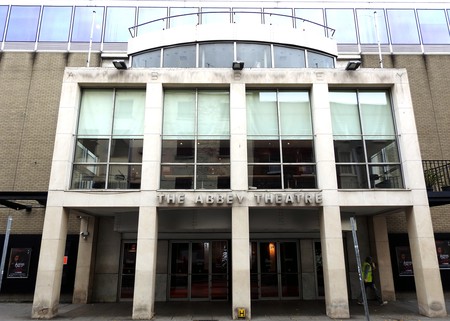 Before the show, have dinner at one of the city’s best restaurants for modern Irish cuisine, benefitting from an early-bird deal. Fade Street Social does a three-course early-evening menu based around Irish produce for €36.50, while Brasserie Sixty6 offers three courses for €31.50. Even the Michelin-star Chapter One restaurant on Parnell Square, which is one of many gourmet restaurants in Dublin, has a pre-theatre special (three courses for €44, booking recommended). 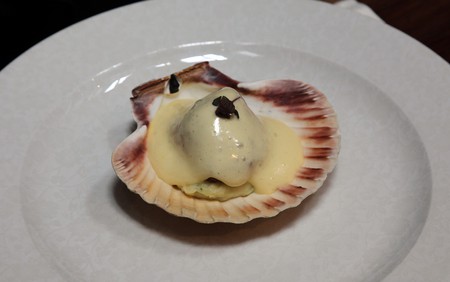 Night: Chase the perfect pint of Guinness and listen to some live music

It’s believed that Guinness tastes better in Ireland than anywhere else in the world, and many visitors to Dublin will no doubt be in search of the perfect pint of the city’s most famous export. Though the title of the best pint in Dublin is hotly contested, a number of city centre pubs are definitely in the running; try Mulligan’s on Poolbeg Street, The Palace Bar on Fleet Street or The Stag’s Head on Dame Court. The latter also hosts regular “trad sessions” where local musicians gather to perform traditional Irish tunes.

Start your day at Storyboard in Islandbridge, described by food critic Catherine Cleary as serving the best café food she’s eaten in Ireland. Note that Islandbridge is about a 15-minute bus ride from the city centre, but it’s worth it for fusion brunch cuisine such as kale kimchi pancakes with free-range scrambled eggs.

From Storyboard, it’s less than a 10-minute walk to Kilmainham Gaol Museum, one of Dublin’s best museums and where many Irish revolutionaries were detained and executed; this historic but somewhat sombre attraction is accessible only by guided tours, which must be booked. Storyboard is also less than five minutes to the Irish National War Memorial Gardens, an elaborate green space that sits on the banks of the Liffey. The Irish Museum of Modern Art (IMMA) is also within walking distance. It’s housed inside the former Royal Hospital Kilmainham, the oldest classical building in Ireland, and stands on the site of the seventh-century settlement of Cill Maighneann, which gives the area its name. On the grounds, you’ll find what was once Dublin’s main cemetery, complete with a 10th-century standing stone. 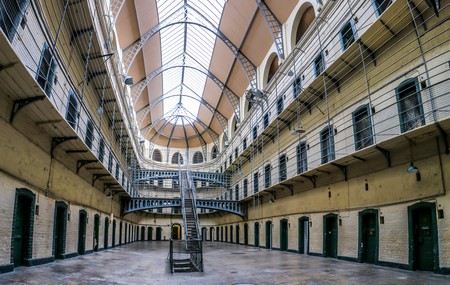 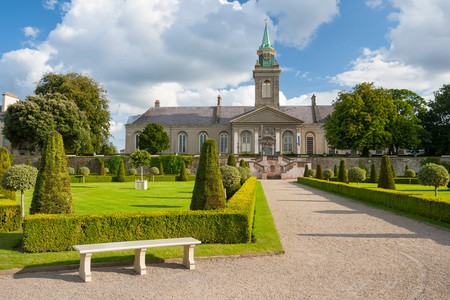 Pro tip: If visiting the Irish National War Memorial Gardens, make arrangements ahead of time to view Ireland’s Memorial Records, illustrated by the celebrated stained-glass artist and illustrator Harry Clarke, in the book room at the gardens.

Afternoon: Have lunch on the north side and visit the GPO

Dublin’s prosperous “south side” (south of the River Liffey) has typically been thought of as the more appealing of the city’s two halves, but the north is in the middle of a renaissance, especially when it comes to food. Returning to the city centre, have lunch at The Winding Stair restaurant and bookshop or The Woollen Mills – both overlook the Ha’penny Bridge and are owned by restaurateur Elaine Murphy, who promotes traditional Irish recipes made with local produce in all of her venues. 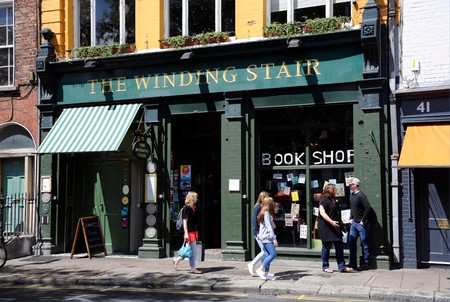 After lunch, stop by the General Post Office (GPO) building on O’Connell Street. The leaders of the Easter Rising occupied it and made it their headquarters during the 1916 insurrection, and bullet holes can still be seen in its Georgian facade. 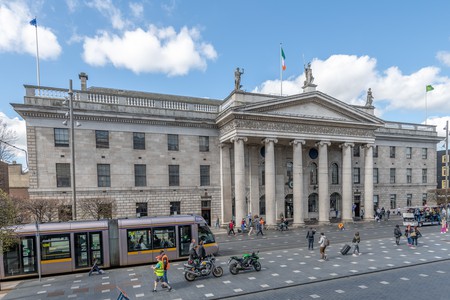 Pro tip: The historic GPO is still a working post office, and it’s become a tradition for those visiting the city to send their postcards from this landmark.

Evening: Dine in one of Camden Street’s many top-notch restaurants

From O’Connell Street, take the green Luas (tram) line to the Harcourt Street stop and walk to Camden Street, a vibrant corridor linking fashionable suburbs with the city centre, where you’ll find some of the city’s most exciting new restaurants and bars.

Talented chefs striking out on their own have flocked to Camden Street in recent years, opening places like Hang Dai Chinese and the award-winning Indian restaurant Pickle. In May 2019, Darren Free, owner of Dublin’s Michelin Bib Gourmand-awarded Delahunt, also opened a walk-in-only wine bar and restaurant inside the iconic Frank’s butcher’s shop down the street. With the original storefront and name preserved, this affordable, stripped-down dining experience brings the diner closer to the chef, creating an intimate dining experience. The guests enjoy artfully plated meals and a selection of wine on tap at the same communal table that the chef prepares the dishes on.

Night: Follow in the footsteps of Irish literary heroes in Portobello

Camden Street marks the eastern boundary of Portobello, an artistic suburb with literary associations. If the night is fine, take an after-dinner stroll along the Grand Canal, which was immortalised by the great Irish poet Patrick Kavanagh in his poem ‘Canal Bank Walk’. Kavanagh loved this area so much that a statue has been erected of him sitting on a bench by the water. 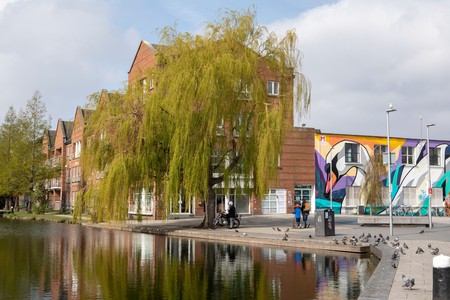 If it’s a night for staying inside, have a drink at The Bleeding Horse instead. Portobello was the home place of Leopold Bloom, the main character in James Joyce’s Ulysses, and Joyce, along with other famous Dublin writers, drank at this pub regularly. Lovers of Ulysses may also want to check out The Sitting Room, Delahunt’s upstairs cocktail bar, which is just around the corner. The building was once a grocer’s shop of the same name (and even has the original shop sign hanging on the wall inside) and is also mentioned in the novel. Sip a Mr Bloom rum cocktail, and enjoy your last evening in Dublin in the authentic mid-century decor.