How To Enjoy An Authentic Irish Trad Session

Visiting Dublin, you’re never too far from the lyrical sounds of a fiddle or flute. But how can you ensure you experience the very best of Ireland’s beloved musical heritage?

Culture Trip heads to one of Dublin’s most sociable locals, The Cobblestone, to witness the magic of a thriving Irish trad session and learn how to share a piece of the action. Get yourself a Guinness, pull up a stool and enjoy this unique musical experience. 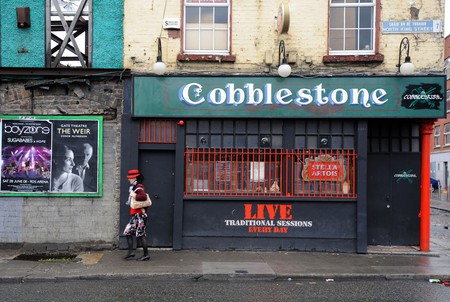 The Cobblestone in Dublin is one of the city’s musical treasures. Every night of the week, talented players from across the city and even further afield come together to host intimate sessions of traditional Irish music, a time-honoured custom in the country. The sessions here were started by affable flute player and Cobblestone figurehead Tom Mulligan. Five years after taking on the pub in 1988, he invited his friends to play in this once derelict area of Smithfield. “We started off bringing in people whom I knew. It wasn’t like Temple Bar, like a show where you’re not allowed to join in – all were welcome,” Mulligan says.

Nowadays, musicians eager to jam and regular punters looking for a bit of culture flock to The Cobblestone for that friendly, familial experience. “There’s a revival,” Mulligan says. “When I was young, you didn’t tell anybody you played music. That embarrassment is long gone.”

Louise O’Connor, a young fiddle player and newly established cèilidh (a type of traditional dance) teacher from County Clare, plays regularly at The Cobblestone. “It’s a very authentic place for a session. You could have people from all corners of the world sitting in to play or listen,” she says.

Finding a session in Dublin can be as easy as wandering into a pub, or asking a musician where their favourite places to play are; but trad sessions, although Irish in origin, aren’t limited to Ireland. Websites such as The Session list sessions worldwide – though don’t expect to hear the same songs in Singapore as you do in Sligo. “Sessions are everywhere, but they are so regional,” says O’Connor. “There are incredible differences in the type of tunes that are played.” 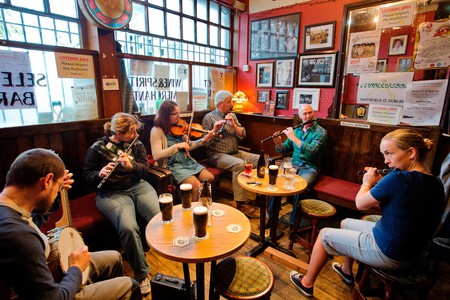 Musicians gather every evening of the week at The Cobblestone, which is known for traditional Irish music | © National Geographic Image Collection / Alamy Stock Photo

Know when to join the players

Visiting musicians should know when to sit alongside the players and when to hold back. “There’s definitely kind of an etiquette,” says O’Connor. “It’s good to identify who has been booked and who is the person in charge in that session … You wouldn’t just sit in and start playing.”

Keen musicians will also need to be familiar with the tunes, and of course confident in demonstrating their skills. “If musicians feel they are up to the standard, then they can join in,” says Mulligan, though he’s eager to point out that playing at The Cobblestone is far from a formal audition process. “Just go in and introduce yourself. It’s very organic.”

Needless to say, you’ll also have to be able to play one of the trad instruments. “Typically [you will see] a flute, a concertina or accordion, a guitar or banjo,” says O’Connor. However, in a trad session anything goes – don’t be surprised if you see someone lugging their harp through the narrow pub door on a Monday night.

Play it by ear… and rewatch ‘Titanic’

If you want to hear what Irish trad is all about, O’Connor suggests starting with the ‘Kesh Jig’ and ‘Cooley’s Reel’. “’John Ryan’s Polka’ is a very popular one. They play that in Titanic when they’re downstairs! It’s lovely to dance to.”

However, spectators needn’t worry about being overly familiar with tunes or their origins – most players in Ireland have been taught by family members or friends, with the tradition passed on through communities rather than through education. “It’s an area I have studied but I can never get to the bottom of it,” says Mulligan, who later hands over an academic book on the topic.

Studying the songs is no easy task. “There’s hundreds of tunes,” says O’Connor, and the session’s ever-evolving aural tradition means it’s not quite as simple as matching a tune to a title. “You look up ‘The Kesh’ and that could have 20 other names. It just changes and changes,” she laughs. “Half a session could be discussing what a tune is called, and everyone might have a different name for it.” 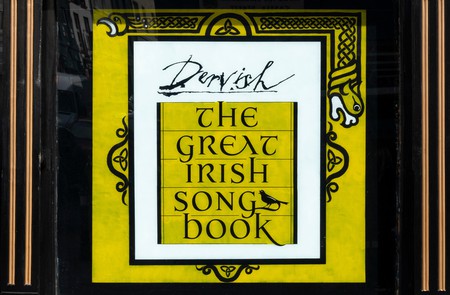 Don’t be afraid to get up and dance

The majority of Ireland’s instrumental tunes are associated with forms of traditional dance. The most commonly played these days are reels and jigs, though you’ll also hear waltzes and polkas, among others. “I’m a fiddle player and a dancer, so for me it makes so much sense for me to be dancing to [a tune]. When I play sessions now, I will sometimes get up and dance the sean-nós [old style] step,” says O’Connor. In addition to her playing, she also runs Celtic Dance Party, where she teaches the step dancing to live session music.

So do punters dance during sessions? “Not really. They are a bit nervous and for me I think it’s kind of a shame because the dance has become a little bit separate from the music,” O’Connor says. So if you’re at a session, don’t be afraid to join in with a boogie.

One of the first things that newcomers to a trad session like to do is get out their phones and film. And who wouldn’t want to capture the moment? “You get used to being filmed when you play sessions a lot,” says O’Connor. But don’t assume that everyone is happy about being part of your Instagram story. “It is nice to ask: ‘Do you mind if I film?’” she adds.

Being respectful is the only basic rule of observing a trad session, and of course, making sure you’re not putting yourself centre stage as an audience member. “It’s good to free up the seats for the musicians,” O’Connor points out.

What about requests? “Musicians would be impressed if you knew a good tune and you asked for it. If you asked for something like the ‘Kerry Polka’, or some of the really common ones, they might be like [rolls eyes] if they’re a really high-standard player,” O’Connor says. However, the sesh is all about the craic (good times); if you really love a song, don’t be shy about asking for it to be played. The classics are a classic for a reason. 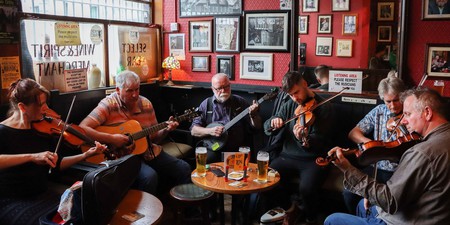 If you like a tune, offer the players a drink

“Tipping is not very common at all. In Temple Bar, musicians would have a glass or something for tips but at sessions here [at The Cobblestone] … I think it would be slightly frowned upon,” says O’Connor. “We meet up to play for the love of it. There are no goals in sight – only to have the craic and maybe pick up a few tunes by ear. Some people do get paid but we’re not looking to get that.”

Mulligan concurs: “There’s no competition, you know? There is no general reward.” Of course, that’s not to say that the offer of a Guinness would be frowned upon if you enjoy the performance.

Chat to your neighbour and enjoy the craic

Walk into The Cobblestone and you’re just as likely to start chatting to two elderly regulars as you are a group of young travellers from the other side of the world. The joy of the trad session stems from that sense of boundaryless community. “It’s been a very good place to meet people and a second home for me,” says O’Connor.

Age is no factor when it comes to trad. “You can sit and play with someone who is 18 or someone who is 80,” says O’Connor. I play a session on a Sunday afternoon in Darkey Kelly’s and Temple Bar, and that’s a really young group.”

Mulligan is especially aware of how trad music is evolving: “I thought I knew most of the music! But my own children have introduced me to music so much.” And what does that mean for the future of Irish trad music? “The standard is going up all the time, and that’s all for the better,” he says.